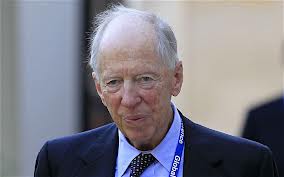 (left, Jacob Rothschild)
The Rothschilds have used Jews to translate their fraudulent credit monopoly into a satanist world tyranny (eg. Communism, socialism liberalism, feminism.) Doreen Bell-Dotan says the Rothschilds control Jews by controlling their knowledge, in the same way as they control the rest of humanity.
"The Jewish Problem"
by Doreen Ellen Bell-Dotan
Tzfat, Israel
(Edited by henrymakow.com)
The Rothschild family, most especially Jacob Rothschild, maintain an absolute monopoly over Jewish scholarship and Jewish policy worldwide.
That includes all of the streams of Judaism and all of the studies undertaken and policy decided by the various Jewish ethnic subgroups. 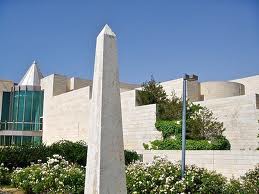 Their interests in all that pertain to the State of Israel in particular are reflected in their donation of the Knesset and Supreme Court buildings, the latter of which is infamous for the widespread Masonic symbolism integrated, part and parcel, into its architecture.
According to one source,
"Jacob Rothschild resigned from the family's bank NM Rothschilds in 1980, started RIT Capital Partners. He is chairman of Yad Hanadiv, the Rothschild foundation, chairs the Jewish Policy Research, dedicated to promoting issues affecting Jews worldwide."
(I take exception to Jacob Rothschild being referred to as a "Kabbalist" on the above site, BTW. He does not learn Kabbalah. He learns and practices sorcery, which is proscribed absolutely by Torah.)
"The Yad Hanadiv [which means Hand or Fund of the Generous Benefactor  and the Baracha Foundation [which means Foundation of the Blessing awards fellowships annually to scholars (who hold non-tenured university positions or who will not receive tenure within a set time frame) in Jewish studies. The purpose of the fellowships is "an effort to enhance the quality of courses, instruction and research in Jewish Studies in universities throughout the world ... Fellows will spend a year in Israel, pursuing their research projects while participating in a structured programme in their field of study."
" The programme will include regular meetings with a senior scholar who will be selected in consultation with the Fellow and who will serve as an academic supervisor." Upon completion of the fellowship year, the Fellows will be required to confirm that upon completion of the academic year they will resume teaching Jewish studies, at a University abroad."
Rothschild serves as chairman of Yad Hanadiv, the Rothschild foundation which built and handed over to the State of Israel the buildings for both the Knesset and the Supreme Court. He is also President of the Institute for Jewish Policy Research, an organization dedicated to cooperation in research, analysis and policy planning on issues affecting Jewish life worldwide."
Yad Hanadiv and the Beracha Foundation are offering endowments for the study of the Dead Sea Scrolls - the only hope the Jewish people have of being able to compare that which is written in the Talmud with another contemporaneous source and thus know how to sort out what is true and what is untrue in the Talmud.
The studies of the Dead Sea Scrolls have been systematically distorted and stymied. Research on the Dead Sea Scrolls is routinely farmed out to pseudo-scholars who have neither the Hebrew proficiency nor the background in Jewish studies to be able to understand the Texts properly and often have an agenda of their own that is inimical to understanding the Dead Sea Scrolls properly.
TRUE JUDAISM SUPPRESSED
I, for one, feel much more comfortable with the Judaism found in the Dead Sea Scrolls, that of the Tzdokkim (the Saducees) than in the Pharisaic Talmud and the Rabbinic tradition which is derived from it.
The Judaism of HaYachad (meaning 'those who are unified', commonly known as the Essenes and the Dead Sea Sect) resembles the Judaism of the Talmud in many ways.
But there are also very important divergences - and those divergences are invariably more in keeping with the Torah than is the Judaism of the Pharisees, the latter of which HaYachad unequivocally stated that they considered filled with capitulation and distortion.
The Rothschilds do not want that Judaism getting out and being practiced because the dark side of the Kabbalah is based on that which is distorted in the Talmud.
And that is precisely why I do want it to get out and around.
This is not to say that all that is taught in Judaism is distortion. The Jews have, despite the Rothschild onslaught, managed to maintain a surprising degree of clarity, integrity and loyalty to the ancient way. However, the infiltration of Judaism by those with nefarious intentions and purposes has most definitely been partially successful and has taken its toll.
---
Related - Exposing the Rothschilds     (Video)
"Jews should not be human shields for the Red Shields - Redirect your hate to the Rothschilds & Warburgs."
[email protected]
----

Nice to see the distinction being made between those Jews descended from the Israelites from The House of Judah vs. the Khazar Jew (Edomite / Idumean) who converted to Talmudic Judaism not exactly Judaism which also distorts The Torah.
Let us not forget The House of Judah had fallen away from The Torah Laws due to infiltration into their priesthood, much like what has happened to Christianity.

Torah Law is The Law for beings in the human-condition fighting against satanism.

Torah Law could have succeeded in keeping satan / satanism from gaining control of people, but at this point in time, it would have to be all the people en masse, not just a handful or a few, relatively speaking.

Torah is not Jewish, nor Talmudic. Torah is The Law Christ referred to in Matthew:-

5:17 Think not that I am come to destroy The Law, or the Prophets: I am not come to destroy, but to fulfill. 5:18 For verily I say unto you, Till heaven and earth pass, one jot or one tittle shall in no way pass from The Law, till all be fulfilled.

Unfortunately, heaven and earth (if mankind proceeds on its current course) will pass away, and The Torah (for beings in this human condition) will be fulfilled just like Christ said. At that point The Law will be appropriated for the beings (who will survive)in the near future.

That was / is the mistake of all Christians who thought The Torah Laws stopped with Jesus. The Torah Laws absolutely did not stop with Jesus, evidenced by heaven and earth still being here, nor will It stop in the future for the beings who survive.
I expect my comment will not be posted because its contents will not be understood.