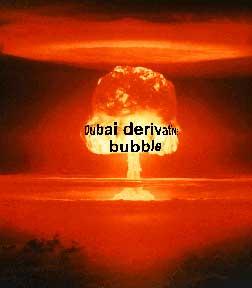 Shock Waves from Dubai Default About to Hit Markets

You've seen the flash - now get ready for the shock wave...

What happened in Dubai just over a week ago was the bright flash, and the media have used the intervening period before the shock wave hits to reassure everyone that everything is going to be just fine - "You just relax, nothing will come of it, it's only $60 billion down the drain or whatever - have a cup of tea". The trouble is that it's not $60 billion at all - the reality is that this is a default on a massively larger scale.

Dubai was a vast sinkhole into which western banks and governments unquestioningly poured not just billions but trillions of dollars which was then leveraged enormously by means of derivatives enabling Dubai to build itself up into a latter day Rome, with a level of opulence and extravagance that would have made Caesar green with envy.

When people think of Dubai the things that come to mind are the massively extravagant 7-star hotels, the towering record breaking skyscraper, palm-shaped island resort complexes etc and forests of new office buildings and apartments etc. What the vast majority don't realize is that the stupendous leverage afforded by derivatives has in addition enabled Dubai to create an immense global empire of businesses, most of the elements of which are broke, having racked up staggering levels of debt. Dubai is the nexus of the derivatives pyramid and it is flat, stony broke.

Where did all the money come from to pay for all these things? - why from taxpayers and pension fund contributors the world over of course, but especially in the US, with Wall St acting as a giant conduit sluicing a torrent of cash into Dubai. The interesting thing is that there was never any accountability - countries and companies vied with each other for the privilege of pumping money into the exalted kingdom, seduced by its supposedly limitless oil wealth, and requesting or requiring guarantees was regarded as impolite. Now that Dubai is broke, the Dubai government has suddenly distanced itself from Dubai World, and the attitude towards the Western banks and governments who have poured trillions into Dubai is "Tough luck - you lose, suckers".

What this means is that trillions of dollars which are now counted as assets on the balance sheets of banks worldwide and especially in the US are actually liabilities. So what do you think is going to happen to the stock prices of these banks - and stock markets generally, when the world wakes up and acknowledges this reality - when the shock wave hits?? Small wonder that the charts for Goldman Sachs and J P Morgan look very like the market charts before the '87 crash, but that was "small potatoes" compared to what is coming down the pipe this time.