Smolensk: The Record of Polish Complicity 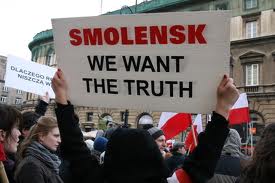 The failure to implement these rescue and investigation
procedures means the Smolensk crash was not an accident but a conspiracy.


On the 10th of April 2010, three hundred kilometers from the Polish border, 96 people died in Smolensk:  the President, members of Polish General Staff and many important civil servants. Till now, Polish authorities have not explained to the Poles why within the first minutes and hours after this event, they did not take actions, which in this situation should be obvious.

Polish authorities did not but should:

1) have sent immediately a rescue team to the accident site,

3) have sent to Smolensk the army, military police or any other Polish

specialized services in order to secure the accident site,

4) have sent to Smolensk Polish special services in order to conduct an
additional view,

5) have sent to Smolensk Polish public prosecutors and forensic science
technicians in order to make a detailed documentation at the site,

6) have not send to Smolensk ministers and the prime minister in order to
conduct a view and issue at the site additional instructions and meet with Russian authorities,

7) have set out, simultaneously to the above mentioned activities, the Critical Staff,

8) have set up in Poland a press conference, presenting the critical situation and its preliminary evaluation,

9) have advised our NATO allies of the occurrence and consult with them
subsequent actions,

10) have not asked the international institutions for logistic and specialized
help,

11) have informed broadly and precisely the public what happened at the
site (after the arrival of specialized teams),

12) have requested from Russia full information of the crash course,

13) have secured the accident site, in order to prevent any changes in
aircraft and victims remains layout,

14) have carried out precise view and make detailed, broad documentation,

15) have documented look and shape of the accident victims' bodies,

16) have carried out several test flights over the cash site, making at the
same time additional photo and film documentation,

17) have carried out removal of victims bodies from the wreck and transport
them to Poland for forensic medical examination,

18) have fenced the area and carry out specialized investigation at the
crash site,

19) have started their own investigation concerning the crash causes; on the contrary, they left the aircraft wreck and black boxes in Russian hands.

The failure to implement these rescue and investigation
procedures means the Smolensk crash was not an accident but a conspiracy.


(This text is a part of the book in progress.)

Comments for "Smolensk: The Record of Polish Complicity "

In his article on the catastrophe of the Polish government plane at Smolensk on April 10, 2010 (4/10), Henry Makow follows an opinion dominant in the Western alternative media that paints the late president of Poland, Lech KaczyÅ„ski, and his twin brother JarosÅ‚aw, as Polish nationalists and patriots. Makowâ€™s opinion that KaczyÅ„ski allegedly stood against Poland joining NWO, is absurd. It was the other way around.
KaczyÅ„ski was a patriot, but for Israel. He solicited a strategic alliance with Israel, lobbied against the Goldstone Report on Israeli atrocities in Gaza, and blocked EU resolution condemning Israeli attack on the Freedom Flotilla.

As a president, in 2007 he legalized the Jewish Masonic organization B'nai Bâ€™rith that was illegal in Poland since 1938. As the president of so-called Third Republic of Poland, he inaugurated the annual celebrations of Jewish feast of Chanukah in the presidential palace.

Earlier, as a minister of justice, KaczyÅ„ski stopped exhumations at Jedwabne, the site of alleged Polish WW2 atrocity against Jews according to Judeocentric media. The exhumation offered a chance to clear the Polish nation of Judeocentric charges of this "Polish" murder that had been actually carried out by German Nazi Einsatzgruppen. KaczyÅ„ski brothersâ€™ party, PiS (Law and Justice) stealthily introduced in the Polish parliament a legislation on illegal, multi-billion dollar restitutions to Polish Jews from the state budget. KaczyÅ„ski also brought to a close the construction of a Jewish Museum in Warsaw.
US-rael was the other love of KaczyÅ„ski. The twins solicited a status of Eastern Europeâ€™s most important US military and political "ally" (i.e. vasal). Lech KaczyÅ„ski most actively participated in baiting Belarus, and eagerly supported Jewish 2008 provocation in Georgia against Russia. Earlier, he actively supported the Orange Revolution in Ukraine. In short, with exceptional zeal he supported all anti-Russian US and Israeli provocations on Russiaâ€™s perimeter.

In 2003, JarosÅ‚aw demanded in the â€žPolishâ€ parliament that Poland join the war in Iraq: â€žIt is our war.â€ The KaczyÅ„skis avidly solicited a US military base on the Polish soil and deployment there of parts of the missile system targeted at Russia. They also demanded that Poland send troops to Afghanistan.

Contrary to Makowâ€™s claim, there were hardly any Polish nationalists or patriots on board the fatal Tu-154. The plane carried vasal elite, lackeys of Israel, USA and EU.
Makow should ponder that opinions surfaced in Israel already on the day of the crash that the catastrophe was an assasination ordered by Putin. Global hasbara immediately broadcast this opinion in a calculated anti-Putin campaign.