Is Stephen Harper a Jew? 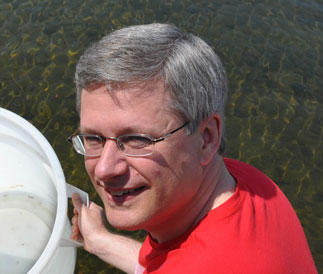 Thanks to his shameless pandering to Israel, Harper's Conservatives got 52% of the Canadian Jewish vote. Muslims outnumber Jews 2.3 to one but it's money not votes that count.

Even Jews find Stephen Harper's pandering to be "creepy."  In 2007, Toronto Jews were miffed to get Rosh Hashanah greetings from Harper's Conservative Party. How did they know I was Jewish? they demanded.

Harper is so pro-Jewish, some Jews are wondering if he isn't a crypto Jew himself.

The name "Hinman" was taken by Jews in the Germanic countries to circumvent the restrictive laws that began in 1790. 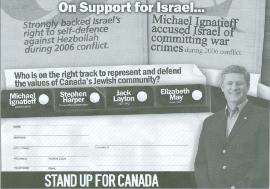 Harper's wife, known as Laureen Teskey, claims roots from Ireland, a short staging area for Jews who went to the USA and Canada.

We have the privilege of witnessing the fulfillment of the centuries-old Illuminati conspiracy, the project of Illuminati (Cabalist) Jewish bankers to take control of mankind. The Illuminati tend to be only part-Jewish, better to infiltrate other groups. Among the world leaders who fit this description are Obama, Cameron, Sarkozy, Putin, and now possibly Harper.

Being Jewish is not a problem. But it is certainly relevant if you pretend to be "Christian," and then pursue rabidly pro-Zionist policies favored by Illuminati Jewish bankers.

One of Harper's first acts was to declare the Hamas and Hezbollah  "terrorist" groups, reversing decades of Canadian neutrality. That meant cutting off financial aid to the people of Gaza.

In 2006, the Israelis destroyed a UN observation post killing four UN personnel, including a senior Canadian officer. No problem, a Harper spokesman said. The UN post was "shielding" the Hezbollah.

"Hamas bears the burden of responsibility. This history of Hamas is to use civilian infrastructure and civilian populations as shields for their terrorist activities," said Junior Foreign Minister Arthur Kent, rejecting any suggestion that Israel's response to Hamas' homemade projectiles had been disproportionate.

Is this the way real Christians speak?

No, as we shall see, Evangelicals or Christian Zionists are another front for the satanic New World Order. They use their "family values" message to enlist millions of conservatives to the Zionist and NWO agenda. 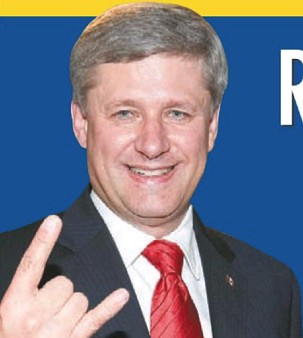 In a new book "The Armageddon Factor: The Rise of Christian Nationalism in Canada," veteran reporter Marci McDonald asks when will "Canadians wake up to the reality that slowly, covertly, the political process is being co-opted by an extremist vision of Christianity..."?

She is referring to the Evangelical belief that Israel must first rule the world, then be destroyed in order for Jesus to return. Then 144,000 Jews and Christians who accept Jesus Christ will be whisked to Heaven while the rest of the human race is destroyed. Millions of Evangelicals subscribe to this nonsense, which apparently equates with support of Israel.

McDonald has touched a nerve. Her book is being ravaged in the national media and she is being called a "bigot."

A  revealing detail in McDonald's book exposes the Christian Right as a New World Order front. (Incidentally, I support their pro-family policies. My point is that these policies are used to catch and manipulate people into supporting Zionism.)

Around 2005, a man named Charles McVety, the President of the Canadian Family Action Coalition started a think tank called the "Institute for Canadian Values." It was funded by a $250,000 grant from a retired trucking magnate named Sydney Harkema.

McVety said there are hundreds of think tanks on the Left, but on the Right, there is a void. So who does McVety choose to head the ICV? Joseph Ben-Ami, an Orthodox Jew who'd been Bnai Brith "point-man" (i.e. lobbyist) in Ottawa and "a top operative" in the campaign of Harper's predecessor, Stockwell Day.

The Bnai B'rith is a Jewish Masonic Order, a major instrument of MI-6 and the Illuminati. The Masons are behind the Liberal-Left and favor everything the Christian right opposes, especially homosexual marriage.

(This information is from an early version of McDonald's book, "Harper and the Theo-Cons" p.12) 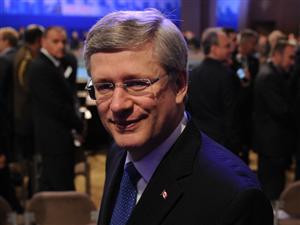 We have been brainwashed to find "anti-Semitism" repugnant. However, we cannot ignore the fact that certain Jews, half-Jews and crypto-Jews, like some Masons, play a prominent role in advancing the NWO conspiracy. Patriotic Jews like myself will be blamed for its onerous consequences.  We have a duty to oppose it now and direct the blame to where it belongs.

From the above, we may conclude that the Illuminati don't care about policy. They care about power. They gain power by being their own opposition and by monopolizing all points of view. This way they can manage minds and events.

Many members of the Christian Right are sincere but, as with most groups, the leadership is not. I suspect the entire Christian Right is a put-up job, a Trojan Horse for Zionism and the NWO.

Politics is a charade. We  have no real leaders. Like Stephen Harper, they all represent the Illuminati bankers.

Comments for "Is Stephen Harper a Jew? "

i walked away in disgust before the first election with the reformers and was then president of the alberta party and learned about the deeper control with the rcmp --honest men dont make it into political power unless it is in a bambi in the headlights scenario like chuck cadman but not having a clue --they dont get very far....

here is how canada is really controlled...
http://www.cjc.ca/parliament/

Totally agree with writer and comments. He is a proxy and whether he is actually Jewish is of little import, defacto that is what he is. He is constantly posturing with ways to subvert until such time as he gains a majority, then all bets are off - needless to say, it matters very little - He or iggy or whomever, they are all owned.

Whether or not,what he is is a warmongering fraud, unelected by over 75% of Canadians yet supported by the Liberal and Block "leadership" who keep him in Ottawa.

Is he a "jew" ? Maybe. He ain't no Christian, and that is a fact. He demonstrates zero Christian values and his brown nosing Israel the way he does is a national disgrace.