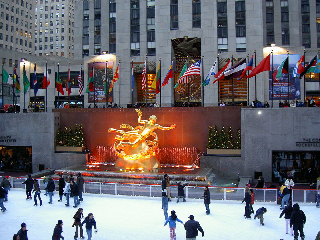 by William Ramsey
(for henrymakow.com)

In the 20th century, the vast wealth of the Rockefeller family was put to use building the monolithic Rockefeller Center, the United Nations and the World Trade Center in New York City.    Each building complex is suffused with occult symbolism and meaning.  When one analyzes the artwork associated with these structures, their design and purpose are clearly Luciferian.

In the Sunken Plaza of the Rockefeller Center is a golden statue of Prometheus, a Titan of Greek mythology.  He betrayed Zeus, the Father of the Gods, by stealing fire and giving it to mankind.  Behind the gilded statue, etched in granite, are the following words:

"Prometheus, teacher in every art, brought the fire that hath proved to mortals a means to mighty ends."

The statue is circled by the insignia of the astrotheological occult---a visual depiction of the twelve signs of the zodiac.

The allegory of the fire of Prometheus is another version of the rebellion of the proud Lucifer ("light-bringer"), who was hurled down to the bottomless pit, or simply unto our Earth, to live as man. [1]

Here she refers to the fallen Titan as one who transforms man into a God:
Hence the allegory of Prometheus, who steals the divine fire so as to allow men to proceed consciously on the path of spiritual evolution, thus transforming the most perfect of animals on earth into a potential god, and making him free to "take the kingdom of heaven by violence.[2]

Blavatsky also promoted in The Secret Doctrine (Hitler's favorite book) the lie that Prometheus, the symbolic representation of the devil, is not an adversary to mankind, but a benefactor:

Prometheus is not a criminal, save in the eyes of the gods.  In relation with Earth, he is, on the contrary, a god himself, a friend of mankind, which he has raised to civilization and into the knowledge of all the arts.[3]

Revelers and tourists have congregated, even ice skated, before this symbol of the devil for decades.  Additionally, above the statue rests a visual representation of all High Masons and occultists fervent dreams---the national flags of all the worlds countries formulated into a New World Order, under the rule of the Fallen One.

"Some even believe we are part of a secret cabal working against the best interests of the United States, characterizing my family and me as 'internationalists' and of conspiring with others around the world to build a more integrated global political and economic structure - one world, if you will. If that is the charge, I stand guilty, and I am proud of it." [4]

In another location in the Rockefeller Center resides the statue of Atlas, another of the Titans from Greek mythology.  The bronzed figure has his arms wide, holding up the vault of heaven.  Atlas has been forced to carry the celestial world on his shoulders because he rebelled against Zeus, father of the Gods and Man.

Again, this allegorical representation of Lucifer is surrounded by the twelve signs of the zodiac.  In classical European architectural tradition, an atlas is a temple support sculpted in the form of a man, which may take the place of a column, a pier or a pilaster. 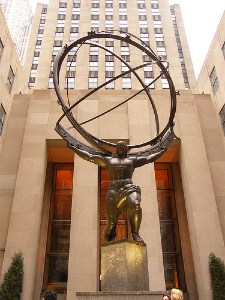 Built on high-priced land in lower Manhattan, the World Trade Center (WTC) contained a statue central to the purpose of the building.   The Great Spherical Caryatid rested between the two 110 story pillars of the WTC, built to promote the breakdown of national sovereignty through supranational economic agreements.

The sculpture is not a caryatid in a plain sense---a caryatid is a sculpted female figure serving as an architectural support taking the place of a column or a pillar supporting an entablature on her head.  The use of the descriptive term caryatid promotes the understanding that the WTC is no mere building, but a temple complex.  Moreover, bronze is a metal alloy consisting primarily of copper, usually with tin as the main additive.  The use of this metal suggests the bonding together of opposites, or different substances---the stated purpose of the building was to bind together nations under supranational economic agreements.

"The supranational sovereignty of an intellectual elite and world bankers is surely preferable to the national auto-determination practiced in past centuries." [6]

An artwork entitled Oculus (Eye) was placed in the Chambers Street/World Trade Center station complex under the WTC.  The centerpiece of the work is an elliptical glass and stone mosaic floor, with a mosaic eye at the center of an ultramarine vortex with the image of the City of New York woven into the picture.

One meaning of the word occult means to eclipse, as when the moon obscures the sun during a total eclipse.  Oc is also the root of the Latin word for eye - oculus.  Oculus and occult share the same root word in Latin.  In the occult, the single eye also refers to the Eye of Horus, a representation of Lucifer. 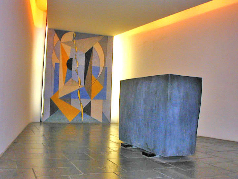 There are 72 geometrical figures (and shadings) in the mural.  The number 72 is a very important number in the occult.  The Lesser Key of Solomon, or the Goetia (meaning howling) concerns the conjuration of the seventy-two evil spirits as defined by King Solomon, son of David:

'Now this Book containeth all the Names, Orders, and Offices of all the Spirits with which Solomon ever conversed, the Seals and Characters belonging to each Spirit, and the manner of calling them forth to visible appearance.' [8]

There are other symbolic representations to Luciferianism:

The mural, if viewed from the top, or the roof, overhead of the Meditation Room, is...is the truncated top of a pyramid. Behind the mural is a smaller pyramid...which contains the eye, the all-seeing eye of Lucifer.[9]

In sum, the defining purpose of each building was to lay a foundation for the construction of a Luciferian global political structure.  These three building complexes, financed and implemented by the Rockefeller family, were created not as mere modern towers, but also designed and decorated as modern temples, symbolically dedicated to the Luciferian doctrine of a New World Order.
-------------

Writer and Director of the new film:  Prophet of Evil: Aleister Crowley www.occult911.com

Thanks for the expose' on Rockerfella's pagan temples. Does this mean that those 3000+ people who died in the twin towers collapse of 9/11 were in fact "sacrificed" on a pagan altar called the WTC? And if so, then what other 'temples' are out there, and to be avoided - maybe someone needs to compile a list?

I read an article on the net about 18 months ago where it stated that Prince Charles believed he was a 'god' - Mars (Ares) in fact, and that he had a bit of a fetish for such things (pictures and statues of Mars). These NWO people all believe that they are gods in a fashion after the ancient gods of antiquity. Some of them call themselves the "Olympians" to that end.

The mere fact that the UN building has parts of it dedicated to Zeus, Atlas and Prometheus (ancient Greek gods) confirms the fact that the likes of Rockerfella and his associates, seem to have this morbid penchant to believe in their own 'godhood'. Most of the ancient legends surrounding these gods of antiquity seem to reveal more about fallen human nature, without any spark of the devine nature of the one true God of Scripture.

In Genesis 11 it talks about the Tower of Babel, man's first failed attempt to build a pagan edifice. There are some that claim a mistranslation of this passage, where it states that the tower was designed to "reach unto heaven". Some scholars feel that this part should read that the top of the tower "has (emblazoned) on it, the pattern (zodiac) of the heavens" (Gen11:4) Admittedly, this is an interesting alternative, in light of the fact that all three Rockerfella temples have zodiacs included in their pagan design.

It seems to me that the effectiveness of heretical accusation has crested. Would you not agree that we need to move into the implementation of pragmatic strategies such as nonconformity of banks and/or military and the emptying of the Churches and Synagogues. Then moving toward the re-implementation of the 10+2 commandments as well as pure communication with God making use of the Isiah effect (Not asking during prayer, but thanking and believing)? If one STILL does not see how obvious this heresy has become they could look to a good refutation of Zeitgeist that has been around for a while.

Your readers comments from a previous article suggest that the exorcist Rev. Thomas J. Euteneuer should not leave the Catholic church which is amusing indeed. Imagine if Christ had thought that way, I remember the (Satanic) collection plate getting thrown do you not?

The Sheep don't know what to do with the information that has been present to them. I hear it all the time, what good is all this if the mental can't be put to action. Social media?

"But you are not to be called 'Rabbi,' (priest, minister) for you have only one Master and you are all brothers." Matthew 23:8

Thank you for the excellent article Rockefeller's Luciferian NYC Temples by William Ramsey.

In his quest for a global occult tyranny of the intellectual elite, David Rockefeller certainly has a lot of company, both past and present. For example, Helena Blavatsky, Alice Bailey, Albert Pike, Manly Palmer Hall, the Nazis, and the Masons.

The ultimate source for this idea is Plato's Republic, but today it is being promoted by the Zeitgeist movement and the so-called Venus Project. These movements combine invincible historical and archaeological ignorance of the Bible with the same occult mumbo jumbo put forth by Blavatsky and her followers. It is a sign of the times that so many people can be so easily deceived by such absolute nonsense.

Henry:: Rockefeller also was quoted on the Ben Fulford video interview saying to the effect that: "Yes, it would be a good idea to have a one world government -- just not an elected one."

Besides the Spirit of God and the spirit in man, it should be noted as such that the devil is a spirit. He is part of the realm of spirits, consisting of faithful angels and demons (fallen angels).

Notice that verse 2 states Satanâ€™s â€œspirit â€¦ works in the children of disobedience.â€ The devil is a spirit and he has power, through his spirit, to influence humanity toward disobedience! Satan, through his spirit, sends moods, feelings, and attitudes of hostility into peopleâ€™s minds, bringing disobedience. The devil has enormous power of influence, allowing him to send thoughts of deceit, anger, pride, hate, greed, envy, resentment, and more, directly into peopleâ€™s thinking!

Satan, as this worldâ€™s god, has seduced the masses of supposed Christianity into rejecting Godâ€™s supreme purpose, involving obedience to Himâ€”so that they can follow a permissive false Christ, so popularly worshiped and believed today, to a false salvation.