Inspired by the Israeli Foreign Ministry's adroit and deft handling of the Flotilla Massacre, transforming a seeming public relations fiasco into a defining moment of Zionist virtue, bravery, and heroism, I have compiled a ten point plan to help BP spin its way out of the Gulf of Mexico Oil Fiasco.

1. The oil rig actually had been commandeered by a radical Islamist group to use as a missile launch site to attack the US, so out of selfless benevolence BP was forced to blow it up. In fact, BP stands for Brave Patriots.

2. Oil is now available freely to all who wish to extract it for themselves from the ocean water. The blowout actually is a great act of charity on the part of BP to the peoples of the US and Mexico. (BP stands for Beloved People.)

3. The New World now boasts its own Black Sea to rival the one between Russia and Turkey. (BP stands for Black Pool.)

4. Turning the sea black is a sign of BP's broader commitment to affirmative action. (BP stands for Black Power.) 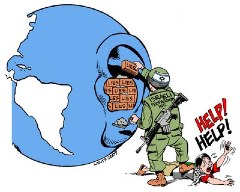 5. BP workers were inspecting the rig, but the rig resisted and forced the workers to blow it up. (BP stands for Bold Police.)

6. The disaster has brought a much needed economic revival to impoverished Gulf states. The influx of reporters and cameramen, coast guard personnel, government officials, and lawyers, has been a great boon to the local economy. (BP stands for Break Poverty.)

7. The disaster has removed the media spotlight from other problem areas around the world, increasing American's (false) sense of security. (BP stands for Believers' Paradise.)

8. The disaster was an act of God provoked by America's criticism of Israel regarding its suppression of Palestinian human rights. (BP stands for Bad Palestinians.)

9. The disaster resulted from America's failure to bomb Iran, which lies next to the Persian Gulf and near the Black Sea, so God turned the "Gulf" "black" as a sign of His anger. (BP stands for Bomb Persia.)