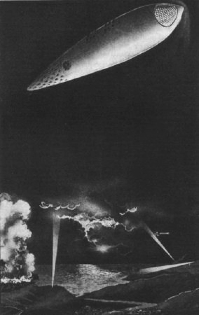 Werner von Braun was in Los Alamos, New Mexico around 1937 testing Tesla's "saucer"-technology which then developed into a "wonder weapon"-program of the Nazi Germany.

The Daily Mail recently reported  about "flying saucer"projects in Nazi Germany and Hitler's plans to use these "wonder weapons" to attack England and USA.

The article talks only about jet-propulsion "saucers", but the Germans were also building real 'anti-gravity' saucers based on inventions of Nikola Tesla (1856-1943).

UFOs or "flying saucers" are man-made, not "alien space ships"

Following the wave of "UFO" sightings in early 1950's, Professor Giuseppe Belluzzo (1875-1952), a scientist-engineer and a former Italian cabinet minister, who apparently personally worked in one of these German-Italian "flying saucer" projects in the 1940's, was quoted in Italian and American newspapers saying:

"There is nothing supernatural or Martian about flying discs, but they are simply rational application of recent technique. ..some great power is now launching discs to study them."

You can read more about Professor Belluzzo's saucer project here and here.

..'You should not be at all surprised, if some day you see me fly from New York to Colorado Springs in a contrivance which will resemble a gas stove and weigh as much. ... and could, if necessary enter and depart through a window.'

In some books about Tesla and his inventions, this description of his "box like" flying machine is told to be about his helicopter-like 'flivver'.

Actually Tesla's "flying stove" used an electro-propulsion system, which was to be powered by external power stations and Tesla's 'wireless transmission of energy-system' or with a power generator inside the craft.

In a 1911 article from The Sun Tesla describes his flying machine:

"Dr. Nikola Tesla leaned back against his chair at the Waldorf last night and talked calmly of airships without planes, propellers or any of the other gear of the now familiar aeroplanes hurtling through space at tremendous speeds or driving more slowly carrying great loads, and in either case always as safely as the most prosaic of wheeled vehicles."

"...How about aerial navigation?" Dr. Tesla was asked. He considered for a moment or two and then replied with great deliberation:

"The application of this principle will give the world a flying machine unlike anything that has ever been suggested before. It will have no planes, no screw propellers or devices of any kind hitherto used. It will be small and compact, excessively swift, and, above all, perfectly safe in the greatest storm. It can be built of any size and can carry any weight that may be desired" - The Sun, New York - 'Tesla Promises Big Things'

In a 1911 New York Herald article Tesla specifically explains that his flying machine is not a conventional airplane, nor a 'lighter-than-air'- airship ( a Zeppelin-type). He also tells us that his flying machine is not affected by winds or "holes in the air", and that it can be held "..absolutely stationary in the air, even in a wind, for great length of time."  ..starting from section: Ten Horse Power to the Pound

Anyone familiar with the operation principles of the so called "conventional airplane" understands that Nikola Tesla's flying machine described in these 1911 quotes has to be an 'anti-gravity' craft, so a real "flying saucer".

According to William Lyne, the author of the books 'Pentagon Aliens' and 'Occult Ether Physics: Tesla's Hidden Space Propulsion System and the Conspiracy to Conceal It', Werner von Braun was in Los Alamos, New Mexico around 1937 testing Tesla's "saucer"-technology which then developed into a "wonder weapon"-program of the Nazi Germany.

After WW II this secret "Tesla saucer"-program travelled back to US along with von Braun who started also working on the US rocket and space programs.

The Smoking Gun: An F.B.I. Report of a "Tesla saucer"

A proof of a German electro-propulsion (anti-gravity) flying saucer comes from FBI reports.

In 1957 a Polish immigrant offered his help to the FBI to explain the "car engine stalling UFO sightings" of the 1950's, and shared his experience as a WW II POW working at a prison camp at Gut Alt Golssen near Berlin.

In the report he tells that while going to work to a nearby area in 1944, they started to hear a high pitched noise similar to a large electric generator and their tractor engine stalled which they couldn't get starting again. They didn't see any machinery nearby but when the noise stopped, they could get their tractor starting again.

Few hours later working in the same area, he saw a vehicle slowly rising vertically from behind a tarpaulin-type wall around 50 feet high, surrounding a circular area of 100-150 yards in diameter..

"..This vehicle[...] circular in shape, 75 to 100 yards in diameter, and about 14 feet high, consisting of dark gray stationary top and bottom... The approximate three foot middle section appeared to be a rapidly moving [...] producing a continuous blur similar to an aeroplane propeller, but extending the circumference of the vehicle. The noise emanating from the vehicle was similar to the noise previously heard. The engine of the tractor again stalled [...] the noise stopped, after which the engine started normally.

Uninsulated metal, possibly copper, cables one and one-half inch to two inches in diameter, on and under the surface of the ground, [...] were observed..."

A photocopy of this FBI report can be found in 'Hitler's Flying Saucers: A Guide to German Flying Discs of the Second World War' (on this chapter) a book by Henry Stevens.

Because the global 'war industrial complex' (banker-industrialist cabal) wants Tesla's inventions to remain a secret they have produced propaganda for decades to make people believe the "flying saucers" are of extraterrestrial origin, but they're not.

It also seems that most of the super powers of our planet are aware of this technology.

There was an article in China Daily awhile ago about the Hangzhou-UFO which made an airport to close down for awhile. The source on the matter to China Daily said that the UFO was related to Chinese military.

The information that the Hangzhou UFO was connected to Chinese military was also reported by ABC News.

One more reason for the banker-industrialist cabal to keep Tesla's 'flying machine' hidden away from the public is that it apparently used(uses) 'over-unity'-technology to power itself. ..and naturally "the cabal" don't want people to have clean and FREE energy because they would make very little money this way.

Tesla talked quite often about extracting energy from the Aether (dynamic light bearing ether) but because most of Tesla's notes and papers were confiscated by US authorities after his death in 1943, these over-unity-generators are mostly treated as a "myth" or as bogus science, because "..There is undisputed scientific consensus that perpetual motion would violate either the first law of thermodynamics, the second law of thermodynamics, or both." (Wikipedia).

..But naturally, there can be errors in these man-made laws.

One of these over-unity-generators is mentioned by Tesla as his 'particle beam'-device. He tells us that this 'high potential electro-static generator' " ..can be made self-existing be suitable connections." 'Self Existing' means this generator produced ALL the energy it needed to operate itself (..and more).

This generator ran on air (..perhaps liquid air) and it was hermetically sealed so the same gas was used over and over again (..and the air was probably re-liquefied after the combustion process).

William Lyne explains the operation of this type of generator on page x.(preface) in his book Pentagon Aliens.

All the generator needed was an external energy source to start it up, after which it ran till someone stopped it or because of a mechanical failure. This Tesla mentions in his correspondence with Sava Kosanovic, March 1, 1941 .."I add that in the station one must have a small generator or battery of 30 volts for activation"

I also believe this 'particle beam' invention of Nikola Tesla is the device from which they developed the device that they use to make 'crop circles'.

This Tesla UFO story certainly has a ring of truth about it! Remember the cartoon TV show the Jetsons where families all flew around in such a simple hovering craft? I believe they, the elite, may have at one stage thought to introduce this technology in their NWO "in the future" but may have changed their minds for reasons such as lack of sale of oil, electricity, control, etc.

Further, I believe that this NWO run (as the bible says) by Satan, knows that when world events really heat up that the bible states there will be a rapture of the saints (believers) and they will have to have some credible explanation for their being seen floating up to meet Christ in the air ("clouds") millions of people all over the world. Well we can't have the earth dwellers believing in Christ and God the Father now can we, that would mess up Satan's plan and control. So what better way than to say Aliens have come in their floating ships in the sky and taken them. I find that one of Hollywood's main jobs is to seed our minds into their way of thinking and prepping us to react the way they want us to.

Think I'm wrong: See the latest movie Skyline: http://www.youtube.com/watch?v=qdOGJi5Sne4&feature=related Instead of the wonderful prophetic rapture event they make it out to be a horror alien abduction. It seems, I read, that the elite as part of their religion, have to tell us what they are going to do but mostly they do it cryptically, as in some movies. In the trailer it says "Don't Look Up" - we should be looking up: http://www.youtube.com/watch?v=ZiZjjfBc41Y&feature=related