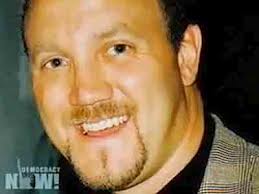 (Bradley Birkenfeld, left, got $104 million for squealing on his ex-employer to the IRS.)
Democracy and nationhood are a charade. The IRS is a private collection agency. It reflects our true status in life: interest-bearing cattle & collateral for the Judeo Masonic (Illuminati) central banking cartel.
by Henry Makow Ph.D.
This story caught my eye last week.
Bradley Birkenfeld, 47, a former Union Bank of Switzerland employee secured a whistle-blower award of $104 million, "the largest individual federal payout in U.S. history."
Bradley Birkenfeld, 47, worked at the largest Swiss bank for five years.
He told authorities how UBS bankers courted rich Americans, managed $20 billion of their assets and helped them cheat the IRS.
The "largest individual federal payout in US history."  That got my attention. The federal government is never that generous!  That's when I found this excellent reminder  that despite what Bloomberg News wants you to believe, the IRS is not the federal government:
"You might think that the I.R.S. is owned by our government.  A branch that collects taxes from the citizens in order to fund our government.  If you think that, you would be wrong.
The I.R.S. is owned by entities outside our country,  and by its operation is a collection agency for the Federal Reserve.  As you may know, the Federal Reserve is not a governmental agency, but it is a private bank [i.e. Rothschilds, Warburgs etc.  ] that lends our government money.  Our tax money is collected by the I.R.S. and sent directly to the Federal Reserve banking system.
Our government is financed much in the same way as you might finance your home.  The politicians spend so much money that there is no way that the taxes collected would be enough to pay for all their activities.  So, they borrow money from the banking cartels, and they tell the banking cartels that they can go get the money from the citizens. 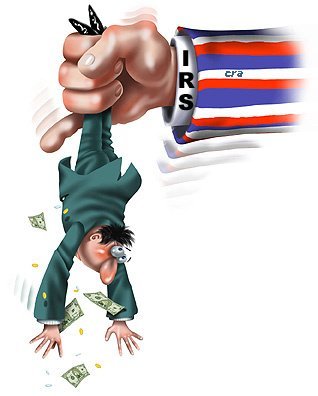 We the people, our labors, our person, is then owned by the banking cartels just as your home us actually owned by the mortgage company.  Don't pay your mortgage payment and you'll quickly see who really owns your home.

Don't pay your taxes and the I.R.S. has the "right" to garnish your wages and freeze your accounts.  That is because our government sold us to the banking cartels as collateral many years ago.  We are property used as collateral for the loans that our politicians take out against us.  We are slaves - literally.
When you see how things actually operate, you can begin to see how these enterprises operate much like organized crime.  The government is the enforcement division, the I.R.S. is the collection division, and the big banks are for money laundering.

Unfortunately all of the money collected goes only to interest payments against the HUGE debt (loans) that our politicians have taken out against us.  They keep spending and we keep paying.  Illegal as it is, they have the bigger guns.
Illegal scams like our government have come and gone throughout the ages.  Just before we won our independence from Great Britain, we were subject that were required to pay exorbitant taxes to the monarchy.  We were not represented, and so "taxation without representation" was the phrase of the day.  That led to the Boston tea party, and the rest is history."
IMPLICATIONS
When the author says "the government is the enforcement division," he is really referring to the "Department of Homeland Security." The central bankers know they have to establish a fascist state in order to ensure their "debt" gets paid. They are behind 9-11 and the whole "war on terror" ruse which are pretexts to establish a police state.
All countries are "indebted" to the same clique, so they plan to merge them into a thinly disguised totalitarian one world government.
Until the general population recognizes the real enemy, society is at war against itself.  For example, all foreign wars are contrived to weaken, impoverish and distract.  They finance the Taliban so we can have a state of perpetual war. (In World Wars One, and Two, they found ways to fund Germany.)
Our political, economic and cultural leaders (i.e. education & the media) serve the debt holders, who unfortunately are satanists. We are like Stockholm Syndrome hostages hoping to be unharmed if we play nice.
Indeed, it is possible for individuals to thrive under these circumstances, and hope the day of reckoning is postponed. Society has proven incapable of  resistance because all the power is in the hands of collaborators. We are a colony where the citizens don't even know they have been colonized.

The American people as a whole should file a class action against the IRS for violation of the RICO statutes. Every American who files a 1040 out of fear has been injured by this ongoing criminal enterprise. To paint the IRS (and its snitches) as doing noble work rooting out fraud and cheats is the height of hypocrisy and propaganda.

One of the greatest pieces of consumer protection law ever written was the 1998 IRS Reform and Restructuring Act. It really brought into public view for the first time how riven with corruption and abuse the IRS is. But the act didn't go far enough. The IRS should be shut down. Every American pays too much in taxes, Bill Gates as much as the 3rd-shift waitress at the local diner. That Americans' desire to protect and shield what little money they have built up over a lifetime of hard work and sacrifice is regarded as "cheating" and "not paying your fair share" shows what a looking-glass unreality we live in.

What is needed are real whistleblowers to expose all the corruption within government. The $104 million in blood money paid to this informant are the proceeds of bankrupted small businesses, broken marriages and families, nervous breakdowns and probably suicides too.

I donÂ´t think people have StockholmÂ´s syndrome. From what I gather, most people really do seem to be "good" and simply cannot fathom the abysmal greed and misanthropy of the psychopaths - I mean, the elites - who think they own the world. But after all, what is money and what are laws but reflections of the vainglory that will eventually cause their undoing.

Too, there are those who simply will not see the truth due to laziness, apathy, indifference. These people love their matrix set-up and would not want it any other way. Without their daily doses of brainwashing (TV, movies, school, university) they are lost, which is part of this insidious programming.

People who can take the truth without suffering a breakdown and can continue on courageously are the more rare breed.

As one of your commentators mentioned, as well as the mafia type shake-down that is tax, the means of its collection is designed to be the most onerous it can be.
See here for an audited alternative system, that would free all individuals and businesses to attend to their real business instead of suffering parasitism of lawyers, accountants and politicians:

"most brilliant tax system ever that will give the economy a fantastic boost and save the $900 Billion (2004) dollars that are currently wasted in the United States on the most idiotic tax system in the World."

An economics professor told me once that the purpose of income tax isn't primarily about the collections. It's a means to drain 40% of small business owners resources and time just to keep up with the paperwork and expenses. The monopoly owners are exempt behind their foundations. Obviously this hobbles the competition.

As a US citizen who has been living in Canada for the better part of the past 10 years I always get a kick out of your essays about things American, the latest being the IRS.

You're right, the IRS is a racket and it sometimes destroys lives as it chases the middle class for every dollar while letting mega-corporations pay nothing.

However, here in Canada the government has a different M.O. -- fleece them at the pumps, the checkout stand and the liquor store. Sales taxes are twice those in the US, gas at the pump runs about 50%, and Canada wrote the book on "sin taxes." If you want to smoke cigarettes in Canada, it will cost you nearly $10 a pack and booze is also twice the price as in the States.

Sales taxes are actually the most regressive of all taxes, hitting poor people the hardest. Next time you are going to write about the IRS fleecing people on behalf of the Illuminati, I suggest you drop in a couple of lines about the nanny state government of Canada and how its system of taxation targets low-income nicotine addicts who enjoy a six-pack of beer now and then.