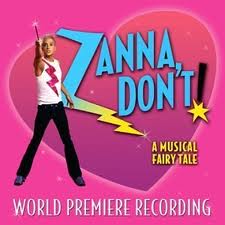 Respect and tolerance is all one-way. Students who objected to gay sex in a school play got no respect and had no rights. Freemasonry has always been about tolerance and "rights" for perversity. Society is oblivious to the fact - it is being inducted into this satanic cult.
"A normal boy won't have any protection against horny homosexuals whether they be students or teachers, and that's no joke... Under the current law, It's not bullying when a homosexual stalks a straight boy for sex. "
Related - Freemasonry's Hidden Homosexual Agenda
- "Bullying is Another Illuminati Psy-op"
(from Oct 2012)
by Fraser Crain
(henrymakow.com)
Why are Federal and local governments so interested in mainstreaming homosexuality now?    There seems to be a link between promotion of homosexuality and satanism, of the Freemason variety.

For example, exactly a year ago football players walked out of a school musical which depicted a football player happily being seduced by a gay male. The story made news worldwide!

The media generally praised the gays and harshly rebuked students that take offense at the flaunting of queer sex by school officials on the public dime. 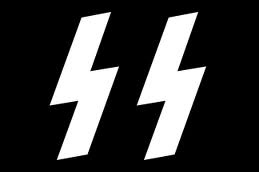 (left. Nazi SS emblem)
The school principal said of the football team walkout, "it was a symbolic kind of thing" as if it were a political act, rather than healthy revulsion.
Not everyone's into deviant voyeurism.  Maybe this principal can't comprehend why teenagers don't want to be made to watch boys lip-lock sexually.

But before reading any more,  let's take a look at this masterpiece that these teenagers were subjected to watch as a captive audience at school, and decide for yourself.
In the scene, a queer kid sings about his crush on the school quarterback, who he then confronts alone in the school locker room. He seduced the 'straight'  football jock, who confides that's he's also turned on. (You can fast forward to 3 minutes if you don't want to waste a lot of time looking at this.)
http://www.youtube.com/watch?v=XCKq2B8VeUk&feature=relmfu 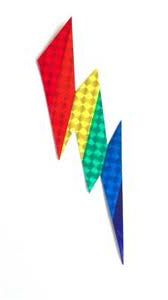 (left. Pride bumper sticker)
Now if you've watched that you may agree that maybe students walked out because it's a lousy musical and it sucks. On the other the Hartford High principal says, "We have to teach students how to respect and honour each other. They need to learn about the diversity of the world and respecting the rights of all people."

Give us a break.  I mean, c'mon - it's a musical for crying out loud.  There's nothing more asinine than a community theater musical production with a "message".  The media says the play is part of an anti-bullying campaign, but there's nothing like that in the actual play.

"ANTI-GAY BULLYING".   What is it?
Since around 2007, a media blitz has cranked up the volume on this "issue".  This manufactured public submission to Capitol Hill enacting the "Hate Crime" Act.
The act was sold by tying together the story of Matthew Shepard, a Wyoming teenager who died from a beating in October 1998, and black man - James Byrd Jr - murdered by red necks in Texas.  Whether James Byrd would have consented to his meme being glued to a gay white boy will never be known.
The President signed the bill in 2009, and the next step is to keep amending it till a normal boy won't have any protection against horny homosexuals whether they be students or teachers, and that's no joke.
That will happen unless the concerned public forces law-makers to acknowledge the distinction between a gang beating up innocent queer, and a boy defending himself against sex obsessed homosexuals who can't take 'no' for an answer.  Under the current law, It's not bullying when a homosexual stalks a straight boy for sex.

Any normal male who was approached by homosexuals in high school, whether it was a teacher or another student, knows that many homosexuals never knew how to take "no" for an answer.   What about "gay stalking" of a straight student?
A DIRTY LITTLE SECRET 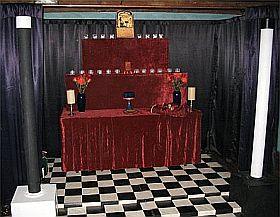 (L. US GRAND LODGE, AUSTIN TX)
Having established that there's no redeeming qualities to explain the media  attention and political protection this third rate queer community theater piece got, there's another reason.  For that let's look not at the performance, but at the symbols used in the set.  First, the entire play is performed on a tilted stage to display the black and white checkerboard floor of Freemasonry - in this case the Ordo Templi Orientis.
The school in the  story "Gay kiss in anti-bullying musical sparks walkout at US high school" is no ordinary public school.
http://www.hartfordpublic.com/index.htm

It was established in 1638 by the famous Puritan Thomas Hooker "to prepare Puritan young men for the ministry."  Hooker came to America on the Mayflower with the other "Puritans" .It's now well known that Cotton Mather and the Puritan leaders were closet Rosicrucians.  Suspected of studying 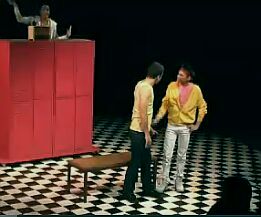 Talmud and Kabbalah with rabbis in London, they relocated to Amsterdam before emigrating to the Massachusetts Bay colony.  The Mather family possessed many Cabalist and Rosicrucian books. ("Cabala" is Kabbalah with a thin Christian veneer).

(Left. scene from play)
'Puritanism' is synonymous with anti-sexuality. Sodomy was actually a capital crime in Plymouth Colony.  However.... "historian Robert F. Oakes has found that Puritan leaders refused to apply these harsh penalties for homosexual activity."  In fact, Oakes found that homosexuality was disproportionately common with the Puritans, yet they rarely punished men for it.   Female offenders however were punished, one could say, sadistically.

Seems that town of Hawthorne's "Scarlet Letter" had a soft spot for homos.
http://www.shmoop.com/new-england-puritans-pilgrims/sexuality.html

Each year in Hartford, organizations and citizens of Hartford dress up in outrageous costumes to celebrate Hooker Day with the Hooker Day Parade.  This is a combination of Mardis Gras and Halloween with a heavy Masonic presence.  It's one notch short of a gay parade. http://www.zimbio.com/Sabine+Balden/articles/S7dilNgDLEt/Gay+Pride+Hartford 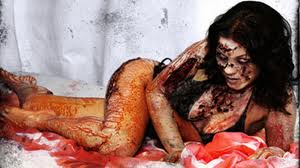 The photo on the left  is from the Zombie Swimsuit Calendar, made in Hartford  They don't like girls very much in Hartford, do they?
http://www.ct.com/entertainment/leisure/nm-ht43zombie-bikini-hooker-20111017,0,4530056.story
That play at the Mayflower descendant's high school in Hartford, "Zanna Don't!" is full of overt Satanic Illuminati symbols and characters. (Zanna Don't! is a word play on Xanadu! - the 1980 musical starring Olivia Newton John. )

The new play is on Youtube in parts.  I only watched a minute and saw a checkerboard floor and a lighting bolt on a gay character's shirt.

The play opens with a radio announcer talking about a street party, "so guys grab a guy, and girls grab a girl, or anyone you wanna grab, and that means you've got some extra love on your hands... (unintelligible)
Lights up on a bed on a Masonic checkerboard floor, containing a really fruity queer who is some kind of perverted Cupid character, who says "there's lots of love around, my job is making sure it gets spread around..."   The queer strips off his PINK bathrobe and is in leotards and a T-shirt with the Satanic lightning bolt on it. 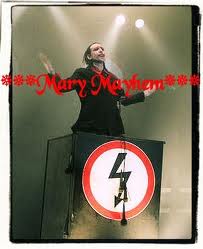 (left. Satanist Marilyn Manson)
In high-falootin' Church of Satan talk "the  lighting bolt symbolizes Lucifer as Prometheus, stealing power from the gods" -
In reality it's a trigger symbol for  the charge they get committing sin.
Seeing it triggers a Pavlovian response to sin again.

Blue Lodge Freemasons of the first three degrees, and Ordo Templi Orientis initiates up to the Xth degree are not informed that the real initiation begins with submission to sodomy.

Two parallel lines to symbolize one from each sex would fall right in line with the Illuminati agenda because the two lines would never meet.

I think the twirling coils of DNA DOUBLE HELIX are more appropriate to illustrate a heterosexual couple. After all the intertwining of the opposite sexes are what create NEW life.

As for the "gay" modus operandi, this is based upon the Luciferic Principle, i.e., the craft of concealing darkness & death in light & benevolence. Thus, an inverted use of the rainbow flag symbolizing a new covenant between man & the Creator following the flood, & a cynical co-opting of the word "gay," once used to express a happy & carefree time & demeanor, as in "The Gay 90's" for instance.

Further, a co-opting & exploitation of the black civil rights movement, & even the Nazi Holocaust itself so as to portray "gays" as victims in common with the Jewish people, rounds out the "gay" perfidy. Science too, of course, was also corrupted.

Jim's comment below indicates pederast abuse....most especially the last statement. Children and adolescents who are sexually abused feel rage when they are rebuffed trying to act out the same as adults with adults in an unconscience attempt to gain back the control lost as a youth when they were molested. A GP friend had many cases like this along with adult women who could not sustain marriage for the same reason.Jim needs a good Therapist .

What Jim posted below is absolutely true. Gay men fetishisize straight men to an absurd degree, and if they're married and have children, all the better.

As a man who has struggled with a same sex attraction for nearly all my life (but not actively gay) I can attest that, at the root, homosexuals are profoundly envious of heterosexuals.

In our hearts we know that homosexuality isn't normal but yet we are compulsively drawn to it. There is a father-hunger within our souls which we are always trying to fill, albeit we try filling it through homo-sex. We too want to be normal but don't know how. We want what everyone else seemingly has but it remains elusive.

In our subconscious minds we think that if we are able to have sex with a straight man that somehow his heterosexuality will rub off on to us. When those advances are rebuffed the jealousy is intensified which can turn into feelings of anger and revenge.

Instead of seeking appropriate help to fix their mental health issues, (yes, homosexuality is a psychological impairment) the gay activists' solution is to turn everyone homosexual. When that's accomplished there won't be a reason for them to be angry or jealous any longer.

If the homosexual agenda has the colour â€˜pinkâ€™ and the â€˜rainbowâ€™ as their symbols, what would the equivalent symbols be for heterosexual people?

Would it be the male and female symbols interlocking? Or would that be too much like promoting sexual promiscuity? I think itâ€™s time that the straight/heterosexual population promoted â€˜normalâ€™ using their own symbol(s).

Any thoughts on a suitable symbol?

How about two parallel lines - one pink and one blue! Other suggestions welcomed.