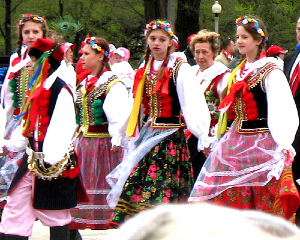 "The Polish resentment of the Jewish propaganda against them is deep and bitter and their spirit of retaliation in this country proceeds against the Jewish pocketbook."


The 1919 Polish-American boycott of US Jewish business was one of the last times Americans acted collectively to oppose the agenda of organized Jewry.

Poland emerged as a nation back in 966 but lost its independence in 1795. Shortly after the armistice with Germany in November 1918, Poland regained its independence as the Second Polish Republic (II Rzeczpospolita Polska). Apparently Poland's reemergence as a nation was opposed by international Jewry who wanted Poland to remain a rump state of Germany.

"The fact is not that the Jews wish well to the new State [of Poland], but that the Jews are at this moment using all their keen intellectual activity and their deep racial loyalty, working all over the world at high pressure, to prevent the new Polish State coming into existence at all."

The following excerpt is from a U.S. War Department investigation and evaluation of issues generated by Jewish power. It was compiled in August 1919 and given SECRET classification until 1973.

c) How serious is the nation-wide boycott against all Jews and Jewish goods recently started by the Americans of Polish descent and their Slavic sympathizers ?

The Foreign Language Bureau of the Government Loan Organization of the United States Treasury in a report of June 4, 1919 states:

"The demonstrations of May 21st, participated in by the Jewish people all through the United States in the form of a public protest against the persecution of the Jews in Poland, has produced on the part of the Polish population in the U. S. A. (nearly 4,000,000) a well-managed, quietly conducted commercial and financial boycott of all Jewish merchants and vendors.

Both sides of the controversy have had ample public hearing in the Press of the U. S. A. The Poles privately maintain that the Jews are disappointed in the development of Poland into a free and independent Nation as the ambition of Jewish leaders for many generations has been to make of Poland a Jewish economic state commanding the commercial and financial channels of Eastern Europe, under a German protectorate.

Be that as it may, the Polish resentment of the Jewish propaganda against them is deep and bitter and their spirit of retaliation in this country proceeds against the Jewish pocketbook. The boycott is now well advanced all through this country and is active in every channel of trade, extending even to places of amusement.

From another source comes the information that other racial groups, namely, Russians, Ukrainians, Roumanians, Lithuanians, Czecho-Slovaks, Jugo-Slavs, Findlanders, Letts, all of Slavic origin will join in this Jewish boycott. Operations for management of same are now under way."

The Department has received a number of telegrams from the American-Polish organizations calling attention to the danger of racial conflicts here and "condemning the insincere tactics of the Jewish imperialists". (See particularly telegram from mass meeting of 15,000 in Boston June 8, 1919 representing 200,000 Polish-Americans in Massachusetts, and telegram of June 15, 1919 from mass meeting at Newark, N.J.) This last telegram also charges that Jewish employers in America have discharged Polish workers and Jewish landlords have evicted Polish tenants.

If such oppression is practiced on any large scale by the American Jews it will inevitably strengthen the boycott movement among the American Slavs and continue to fan the flame of mutual hatred between the two nationalities.

Excerpt from "THE POWER AND AIMS OF INTERNATIONAL JEWRY"

A hard copy of this document may be obtained from U.S. National Archives in Washington DC, - its number is 245-1.

Thanks to Red for sending this.

Dear Henry;An interesting article on Poland.The history of modern Poland is an arcane and confused story which is more convoluted that even the most Byzantine tale. The Western Allies created Poland out of the Versailles treaty to prevent Germany from sharing a border with Russia.The Kaisers Germany had won the war in the East and acquired through the Treaty Of Brest Livosk the Ukraine and other natural resource rich areas of the East which Germany than and now had always lacked.This was lost at the Paris Peace conference when the newly formed Weimar government of the hapless Ebert threw themselves at Wilson's '14 points'. Anti-Semites often very cruel was a mainstay in Polish society and it is understandable and fascinating to see how world Jewry preferred Poland to be reconnected to Germany.(27% of Poland between the world wars was former German territory!As Ben Freedman pointed out;'Know modern nation was a good to the Jewish people had been modern Germany from 1870 to 1919.

Thanks for another positive, even-handed treatment of the Poles, whoâ€™ve been too often ignored, reviled and defamed.

I judged the Poles by their enemies. And I found it was an almost unfailing truth that their enemies were the enemies of magnanimity and manhood. If a man loved slavery, if he loved usury, if he loved terrorism and all the trampled mire of materialistic politics, I have always found that he added to these affections the passion of a hatred of Poland. She could be judged in the light of that hatred; and the judgment has proved to be right.

The review of Giertychâ€™s book elaborates on the boycott discussed in your article.

Shahakâ€™s little gem of a book on Jewish History, Jewish Religion â€“ about Jewish practices and the Jewish mindset regarding non-Jews â€“ has become a minor classic in the Truth Movement.

Any whoâ€™ve bought into the â€œHolohoaxâ€ myth, yet who respect Shahak as an honest and erudite Jew, ought to read his letter on Lanzmannâ€™s â€œShoah.â€

Shahakâ€™s roots were in Warsaw, a third Jewish in 1939. Events like the Warsaw Ghetto Uprising of 1943, in which the remnant of about 70,000 Jews perished, were simply too large and too widely observed to have been made up.

Thus, about 10% of the entire Jewish Holocaust can be accounted for by a single Polish city, and at least half of the Jews who died in the war had been citizens of the Second Polish Republic, however hostile or indifferent most of them were to Poland.

There are reasons for everything, and the suppression of Polish history is no exception.

Fascinating article. It piques my curiosity, since who comes to minds most regarding propaganda and persecution against the Poles. It's Nazi anti-Pole propaganda which we were shown frequently in school movie reels and on television 20th century history shows. Goebbels' dehumanization propaganda against Poles was identical to caricaturization of Jews. Was this simply due to the Nazi's identical predatory designs on Poland? The Nazi's 'smash and grab' approach to subjugation was different from organized Jewry's 'stealth and proxy' approach, but either way the target must be sub-humanized in the eyes of the flock.

20th century racial propaganda was incredibly crude, though today it's still employed with impunity against Muslims.

1919 was a most important year because the US War Dept investigation and evaluation in verified The Protocols of the Elders of Zion as authentic. The proceedings of this investigation were given a secret classification until 1973. (Doc No 245-1 US National Archives Washington DC

This document also authenticates role of Jewry in the planning, finance and execution of the Bolshevik Revolution in Russia 1917.

The Catholic nation of Poland suffered greatly in this terrible genocide of White Russia because of the influence of the Bolshevik Revolution in Poland. The NKVD in Poland was the Bolshevist apparatus and they were certainly responsible for the Blomberg massacres of German nationals in Corridor that prompted Hitler to invade Poland and so commence WW II. The cruelty and atrocities of these massacres defy the imagination even today.

http://wwwpapurec.org has many pages on "Polish Nation Libel". It has also posted the US War Dept investigation on 'The Power and Aims of International Jewry'. www.papurec.org/fundamental/PowerAims1.html.