The Christmas Tree & the Mushroom Cult 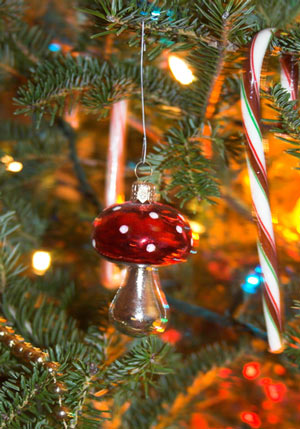 In Northern Europe, there's an alternate history about the origin of Saint Nicholas.
Hold Nickar and friends ate psychedelic mushrooms that flourished under Pine trees
to enter the Christ Consciousness. That's how he became Saint Nickar,
or Saint Nicholas as we now know him !
by Glenn Bullock
(from Dec 21, 2009)
(henrymakow.com)


The traditional aspects of the Christmas tree of today come mainly from Germanic and Scandinavian origins. Christmas as we've come to know it is like other Christian festivals, a mixture of traditions brought together from a variety of backgrounds to satisfy all under Rome !

Those various traditions each had their own enlightenment rituals which became symbolized. Over time we've forgotten the meaning of the symbols, but like most other hidden knowledge it is right under our noses.

In Finland, the Shamans, and one in particular called Hold Nickar, are known to have worn red suits with white spots to pick the sacred Amanita Muscaria or Fly Agaric mushrooms, which are themselves red with white spots. On returning home from picking, on reindeer sleighs, they had their mushrooms in a sack, and re entered their lodges through the smoke hole in the roof ! Hold Nickar and friends ate those mushrooms to enter the Christ Consciousness, that's how he became Saint Nickar, or Saint Nicholas as we now know him !

The reindeer also ate the mushrooms, which is why they are characterized as flying, although this ties in with other older legends of gods flying the skies at night once a year giving gifts to the worthy.

One other thing about Pines is the pine cone which represents the Pineal gland which is situated centrally in the brain, and looks just like a little pine cone. It is the activation by the Amanita of the pineal gland, that opens the internal inter-dimensional stargate that allows us to travel as consciousness to other very real dimensions, resulting in what could be considered the enlightenment of the Shaman !

You can often see the Pope dressed in white with a red cape to represent the Amanita Muscaria, or sometimes in all white with a little white cap, to represent the Psilocybin or Liberty Cap magic mushroom. A lot of traditions use entheogens ( teacher drugs) to enter an enlightened state, Christianity is based on entheogen use amongst other enlightenment practices. There is an enormous pine cone on a plinth at the Vatican to represent the pineal gland; Roman  Catholicism is in part a mushroom cult that hasn't bothered to tell its members !

When in times gone by a man with flying reindeer, and dressed in red suit with white spots (buttons) entered your lodge, through the smoke hole in the roof, to bring a present from his sack, he was bringing the gift of enlightenment by activation of the pineal gland, which is represented by adding pine cones to the tree's decorations to symbolize that gland, which then hang on the tree alongside the dried mushroom that activates it. The Star on top of the tree represents enlightenment itself !
--------------------------

Glenn Bullock, is a 48-year-old Derby, England welder, married, and father of three sons. He has been researching ancient and modern NWO related symbolism full time for the last four years, and is hoping to publish a book some day !

Comments for "The Christmas Tree & the Mushroom Cult"

Regarding this subject, I recommend viewing the content from:

The above film digs pretty deeply into the subject covered by the article you published.

Merry Christmas to you and your readers.

I'm sorry, but I have to convey my sadness at reading an article like this on Christmas Day.
So many so called scholars probably wouldn't last a year in studying scholastic philosophy,
probably couldn't get through the first book of the Summa Contra Gentilles, yet do not hesitate
to kick against the Bride of Christ. I recommend they begin reading GK Chesterton for a
lesson in common sense, or start studying world class historians like William Thomas Walsh.

It's just some something interesting and diverting. I have posted three articles in a row about the real meaning of Christmas.

Pagan symbolisms where used to recruit gentiles into the fold of kabalistic mystery religion of the Pharisees of course as with blue lodge freemasons they do not know it's true purpose. They have always keep us from our true self with falsehoods & distortion of reality. Our 3rd eye which I call our 1st eye has been closed through false beliefs, false religious doctrines, illusions, sodium fluoride, psychotropic drugs, TV, Hollywood, Media, Academia, governments etc.

As we move toward December the twenty first 2012 speculation is growing as to the identity of the Biblically noted person, whoâ€™s number is 666. I learned recently about the simplest of codes used by the Illuminati to encrypt words or names in numbers. Probably the first code any body encounters is one of the simplest A = 0, B = 1, C = 2 code. The simplest Illuminati code just adds one hundred to each of these numbers, so A =100, B = 101, C = 102 and so on.

There is another interesting relationship between that number and these times, and it concerns the global warming swindle. The elite have chosen the Carbon atom as a tool to further manipulate us into accepting one world government. When the Illuminati decide what to do they look for favorable numerical relationships to give magical strength to their project. In choosing the vehicle for our enslavement they chose Carbon, which is made of six neutrons, six protons and no prizes for guessing it also has six electrons to complete the set.

The Carbon atom and Hitler are both numerically 666 !

I am often amazed at the lengths some people will go to attack the Catholic Church. Dan Brown and his international academic sleuth has given it several shots and failed every time. The guest author of your piece is an amateur by comparison. The Church is filled with a myriad of liturgical and religious symbols that provide its members with a peak at the divine and a sense of spiritual exhilaration that he can only dream of. The Catholic Church has been here for 2000 years and will last as long as time does, no matter what writers like this one may say.

I have no idea about the Norse or Germanic traditions - but I celebrate Saint Nicholas on his feast day of December 5'th. No reindeer, no sleigh, no mushrooms, just a guy doing Christ's work in Asia Minor. A saint - what all people should aspire to become.

With regard to the assinine comment of the Pope and Catholocism, the various vestments of the clergy have a significance to the activities of Christ and the Church - red for the blood of Christ, white for the Light of Christ brought into the world, purple for His kingdom here on earth.

By using the author's circumvented logic, I suppose Canada's red and white flag can be used to indicate a hidden love for the Amanita mushrooms. And the maple leaf - well of course the maple is a tree... just like the poplar or the pine where these mushrooms grow. Wow - Canada is one big mushroom cult! Must be nice to have such a myopic view of the universe.

As for the constant harping of adopting pagan traditions - in the end, ALL traditions started from Abel and the first humans who not only believed in a single God, but also communicated with Him. It was only later, through the constant sinning of mankind that God withdrew. THIS is when the first pagans appeared and copied the traditions of those who followed the One True God.

These traditions have not been 'adopted' from pagans - we've RECLAIMED them! Just as Jesus Christ reclaimed us!