An Overlooked Movie of Beauty 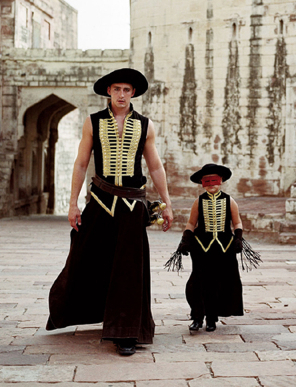 The local video rental store is a place where I can escape and explore something unusual.
"The Fall" (2006) is a movie that fell into this category. From the cover it seem phantasmagorical. My wife and best friend dismissed it as "something silly like that  Adventures of Baron Munchausen movie."
"OK, let's not guess. We'll watch for ten minutes and stop if it's not good."
Most movies are like cakes. One bite tells the story.
We started to watch and were captivated immediately. The opening scenes, shot in black and white, were both elaborate and artistic. They depicted a railroad bridge over a river and a horse being hoisted from the water. Turns out this was the set of a silent movie where an accident had transpired.
Next we are transported to a hospital on the outskirts of Los Angeles in 1915 where the stuntman/ rider "Roy" is recovering from his injuries. He befriends a precocious young Romanian girl who broke her arm picking oranges in the Valley.

Roy convinces the girl to steal morphine from the hospital dispensary to relieve his pain, which is partly spiritual. In return, in his altered state, he spins a fantastic tale for her. The movie alternates between the hospital setting and this fantasy which was shot in sumptuous and exotic locales in 19 countries.

The story blends Roy's personal crisis of purpose with the child's own traumatic history using characters borrowed from other patients in the hospital.

Even more beautiful than the visuals is the child's love for Roy which eventually convinces him to live. Her love is like a woman's love for a husband, or a child's love for her father. Although she sits at the end of Roy's bed, their relationship epitomizes innocence and trust. 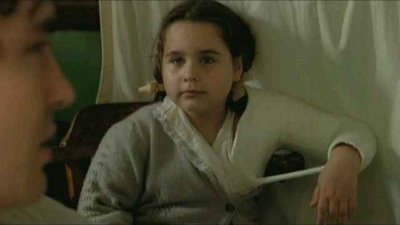 Nine-year-old Catinca Untaru, left, deserves an Oscar. Instead, not part of the Illuminati club, she has not acted since. Indian director Tarsem Singh made his name making commercials and the Jenifer Lopez feature, "The Cell." Here he has created a masterpiece which leaves a glow long after it ends.

Comments for "An Overlooked Movie of Beauty"

You are always complaining that the West has abandoned traditional moral values, and here you are extolling a movie where an adult male convinces a female child to STEAL MORPHINE FROM THE HOSPITAL PHARMACY.

Then you say the relationship between the man and girl is like husband and wife OR father daughter. It can't be both!

And it's the girl who does the work of a psychologist to give the man a taste for life? It is not the job of minors to cure adults. Any adult, even a parent, using a child to get better emotionally is abusing the child.

I don't care about the story these events take place in, they are wrong in the absolute and no amount of circumstances will make them right in my book.

I guess this proves the saying, "beauty is in the eye of the beholder" !

Mr. Makow, can't believe you found this esoteric thing! This is about my fav movie, it is a unique work, I never got tired of watching it many times, some of it with eyes covered between fingers the little girl is so precious, she IS amazing, & Spike Jones produced it.

If you want to see a movie even more grand, if you can imagine you must see JODHAA AKBAR, really. with Aishwarya Rai - It is so amazingly beautiful, I watched it several times,
all 3 1/2 hours of it!, without Eng dubbing! It is that entertaining.

ultimate chickflick. well, maybe GONE WITH THE WIND, & NACHO LIBRE Jack Black to get the endorphins up without drugs/morphine

oh, I can't leave out THE WIND AND THE LION, it's right up there, Sean Connery & Candice Bergen, oh, no, it has to be THE MISSION, young Robert deNiro my former favorite that gets displaced for a little while by these others, but I still keep coming back to that one, what a message, and that musical score!

The film is being praised by the establishment for all the wrong reasons.

For those of us with the eyes to see, the film shows the reality of the role of feminism and sexual debauchery in killing the modern amerikan marital relationship.

Ryan Goslings character "Dean" is a "regular guy" who falls into unplanned wedlock with Michele Williams "Cindy". Despite the odds and his imperfections, Dean just wants to make things work out and is portrayed as a loving father and husband. Cindy (due to her family upbringing, university brainwashing, and whoredom [an amazingly honest scene of an abortion clinic interview positively screams where we've been taken as a society!]) is incapable of the positive communication needed to navigate the marriage past the rocks.

The results are predictable.

On first viewing I don't think the filmmakers are hip to the "full truth" of their portrayal. From everything I've read, it seems they set out to make their characters as realistic as possible and then succeeded. I may be blind, but I didn't detect the makers placing blame on either character or any deeper social "conditioning". If anything they seemed to being saying that the marriage failure wasn't any ones "fault", and that "these things just happen."

The film made my skin crawl and I despised it completely. You should see it.