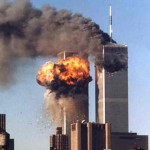 by Myron Goldfarb
(for henrymakow.com)
The crime of the century 9/11 was committed by the Israeli Mossad and the FBI and CIA and George Bush and his cabinet are all involved.

Larry Silverstein leases the trade towers seven weeks prior to 9/11 even though someone had bid $50 million more. Prior to this the Mossad were going around pretending to be Arabs.

They took flight lessons saying they didn't need to learn how to land. Then they left the Koran in cars and were in strip clubs the night before 9/11. The Israelis making sure to tell everyone they were Arabs.
We know the CIA and FBI were involved, because many agents shorted stocks on the airlines and sold options on the airlines and made millions. This should be a horrendous red flag with many agents making millions and could only have done it with prior knowledge. Then you have the FBI agents that confiscated cameras from area businesses that would have shown the missile hitting the Pentagon.
There are so many red flags that prove 9/11 is one huge lie.

Number one,they don't have any photos of all these Arab men who flew the planes in those airports.

Number two, a 757 never ever flies from Boston to California with only forty passengers. It's never been done even once before. That's why they have hubs if they need more passengers. But those planes should have left those airports with no less than 200 passengers and then they might have picked up more in Chicago or Atlanta.

Then we have the fact that nobody could have used their cell phones to call, because they were traveling too fast. So this means the cell phone calls were bogus and they were staged by the Mossad or our government. Then you have the fact that the planes didn't have windows and had a pod underneath and no markings. This means they weren't 757s belonging to those airlines. Then the jets hit the side of the buildings and they hit steel girders but not one piece of the wings or fuselage fell off.

One huge piece of evidence is the fact that when the planes hit they were loaded with kerosene and there should have been hundreds of gallons of kerosene on fire streaming to the ground. But if you look at the videos there isn't any fuel falling. It's just a fireball and nothing more.
In several videos you can clearly see the thermite as it is burning and throwing off showers of sparks prior to the explosions. Then you can clearly see flash explosives going off as the buildings fall and you can see explosives blowing out 200' from the buildings.
The truth be known, none of the planes that left the airport were involved in the crashes. Did the people even board planes or were they simply loaded on buses and taken out of the airports?

The fact that CIA and FBI agents profited from 9/11 is clearly evident by paper trails. The videos show all the evidence we need that there was explosives in the building. Arabs could not have placed the explosives. This leaves Larry Silverstein and the Mossad.
Once again the Arabs are blamed for a crime committed by the Mossad. But if the Arabs had committed 9/11, what were they wanting to accomplish?
The fact is the buildings needed to have the asbestos removed. This would cost many millions of dollars and taken years. So the buildings had become obsolete and what better way for Larry Silverstein to make a few billion? To make us hate the Arabs and have the Patriot Act written weeks in advance and all ready to sign by lawmakers who weren't allowed to even read it.

Now we have one million more federal agents. We have FEMA camps in place. All we need is another attack.
I hope the Arabs are ready, because there is going to be another attack and they will be blamed for it. The Mossad probably is putting everything in place at the moment. People are wondering what will they destroy this time?

Because there was a CIA agent who was tailing Israelis who had a small nuke bomb like the one the Mossad used in Bali.

So apparently we already have a bomb in the USA. So it would seem they are going to bomb something in the southern parts.

Maybe an oil refinery outdated and slated for destruction? Who knows? But we have everything in place and ready to show the gullible Americans what this NEW World Order is all about. Maybe it is another name for Communism?
---

Myron Goldfarb is the pen name of a Jew who doesn't like what he sees.

Henry, I did forget about tower seven. A building that just fell to the ground. after Larry Silverstein said, they were going to pull the building. Some of this stuff is so blatant you wonder why the American people haven't stormed the White House and held the lawmakers hostage and demanded the people responsible for 9/11 haven't been arrested.
Then you have a plane that crashes in Pennsylvania and all there is is a hole in the ground. No wreckage. Clearly this was a missile that crashed and they say it was a 757 and it vaporized on impact and maybe half the population believe this nonsense.
You might have seen the clear footage of the plane that landed in the Hudson River? Did you notice the video compared to what we saw from the Pentagon? The government had nothing to hide so they released the photo, but the most guarded building in the world showed us only a  fireball and clearly it was a missile.
This Larry Silverstein you can only wonder what the people would do to him if they were told the truth. This must be one powerful Jew. I mean he can lease buildings and then implode them with dynamite and isn't charged with lacing a building with dynamite with people inside. I'm sure it's illegal to do this. It seems the FBI spend more time and trouble going after people like Matt Hale and Edgar Steele. What did these people do? They both wrote books about Jews.
It seems that all these people like Rush Limbaugh who constantly tell us about the government and the president is nothing more than a rouse. Rush talked daily about Bill Clinton and the Democrats. But it's just for show. But you'll notice Rush says nothing not a word about Jews.
Henry, what many people don't know is on  9/11 there were many crimes. They stole all the gold from under the trade towers. The Mossad detonated  micro nukes under the towers like they did in Bali. this was done to destroy everything and this was still burning weeks later. The reason for taking out tower seven was it held all the evidence of the Enron investigation. It had the records of the IRS of criminal investigations. So 9/11 was well planned out in advance. Many things like the bombs in the buildings can't be blamed on Arabs. The poor Arabs can't win as long as the Jews want to destroy them.
The American people should keep demanding answers. They should ridicule Bush wherever he gives  a speech. Because he is responsible for 9/11. Although he should be executed for his crimes. The video they have on him in that school on 9/11 is proof he knew in advance.

Lets not forget this video of the BBC (British Bullshit Corporation) where the
female announcer says that building 7 collapsed while it is clearly visible.

Was there ever an explanation by the BBC why they had a "crystal ball" of what
was going to happen ?

Amazing that you ordinary American/Canadian so brainwashed by the media that
they can't think for themselves when there is so much evidence that the whole episode
was staged (false flag) for which the British oligarchy are famous for.

Larry Silverstein now owns the Sears Tower in Chicago. Add Rahm Emanual as the new mayor and you've got the makings of an NYC repeat being put in place. Someone needs to find out what other tribal members are getting into positions of power there, too, and start making noises about it.

Okay watch full screen. There is a object coming in from top right. Where are its wings, tail, engines? If someone can blow this up would be great we dont have the hardware. I am sure it is HD. The original footage would be nice. There is a scientist that says the object that hit the building was a high tech drone possible antigravity craft. Not tossing out any possibilities. It seems there should be some wreckage of a plane somewhere in the footage.
http://www.youtube.com/watch?v=tA1muyTbpD4&feature=player_embedded

Hello Henry, the late Christopher Story also concluded that the twin towers were destroyed by explosives and that they were taken down due to the asbestos that had to be removed from those buildings. Plus the later destruction of building # 7 at approximately 5:00 P.M. that same day also proves that explosives were used to demolish that other building as there was no major fire there to explain its collapse.

Also, before his death, Christopher Story in the UK had received numerous death threats. He supposedly died of natural causes after a short illness. I hope that his family ordered a very thorough autopsy for him after his death to rule out foul play.

Just thought I would mention this information to you if you were not aware of same.