The Jewish Character of the Early Masonic Lodge 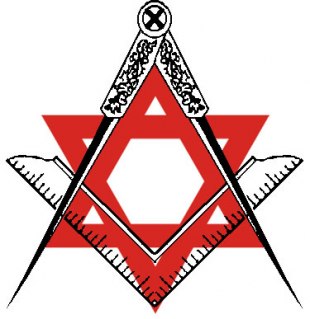 by Fritz Springmeier
(From "Wise as a Serpent, Gentle as a Dove")

Because there has been such a powerful cover up of the role Jews have played in Freemasonry, this subject must be dealt with. The Reformed Rabbi Gotthold Saloman wrote that Freemasonry was more a Jewish movement in origin than Christian. However, as is so often the case today, Jews can say things about themselves which if Gentiles, the Goy, say the same thing, then the non-Jews are in serious trouble.

The initial formation by four Masonic lodges in 1717 of the first public Grand Lodge, included several Jewish Masons as participants. These were Marranos Jews (Jews converted to Christianity) and included Mendez, de Medina, Alvarez, and Baruch.29 In other words, Jews were there from the start. A look at the seals of the various Masonic groups in England in the 18th century reveals a Jewish or magical influence.

Many books, including Morey's recent one, portray the American lodges as anti-Jewish. This is a smokescreen. The only Grand Lodge that was really anti-Jewish was the Prussian Grand Lodge which eventually transformed itself into the Thule Society and then into the Nazi Party. The reason that the Prussian Lodges became concerned in the early 19th century about Jewish control of Freemasonry could be a book in itself, but was based on several items, 1. being close to the several radical Jewish movements in Poland and the German States, the Germans were more aware of what was taking place, 2. in Germany warnings were given by ex-Masons and Masons, 3. German authors like Johann Christian Ehrmann in 1816, Eduard Emil Eckert (Der Freimaurer-Orden in seiner wahren Bedeutung, c. 1850), and Georg Michael Pachtler to name a few wrote books warning the Germans about Freemasonry and the power of Jews within the lodges.

A close examination by reliable Masonic, Jewish, and other sources reveals that the Jews have indeed played an important part in the Masonic lodges since their beginning. A person today will witness for instance such things as the Feast of Tishri observed by for instance the Arkansas Lodge of Perfection.30

The first early lodges in the various European nations of Scotland, England, German states, and France built upon a number of existing organizations. Various secret societies were built upon.

Although it is beyond the scope of this chapter to explain Masonry's early history, it will be found in the Knight's Templar groups, in the secret societies of Europe and the Middle East
(including the Order called Roshaniya, the Assassins, & Sufism), the Rosicrucians, the Prieure de Sion, the Mystery Religions (including the evolution of the Mazdains to Mithraism to
Manicheanism to Freemasonry), witchcraft, and Platonic humanists and philosophers.

Not only were the Masonic Rites formed from the early secret societies, but the secrecy of the Lodges encouraged and provided a forum for men of all types of anti-Christian persuasions, including - but not limited - to the Jews. John Robison, a Mason and a leading intellect of his day, exposed the conspiracy of Illuminized Masonry to take over the world and destroy Christianity in 1789.

After decades of working closely with these men and listening to them in the Lodges he writes about the activities of these men, "...although in direct opposition to a standing rule, and a
declaration made to every newly received Brother, 'that nothing touching the religion or government shall ever be spoken of in the Lodge.' But the Lodges in other countries quickly followed the example of France, and have frequently become the rendezvous of
innovators in religion and politics, and other disturbers of the public peace. In short, I have found that the covert of a Mason Lodge had been employed in every country for venting and
propagating sentiments in religion and politics, that could not have been circulated in public without exposing the author to great danger. I found, that this impunity [freedom due to Masonry's secrecy] had gradually encouraged men of licentious principles to become more bold, and to teach doctrines subversive of all our notions of morality..."31 "...under the protection of Masonic secrecy, they planned schemes... they formed associations in opposition to the... superstitions of the church....The church dreaded the consequences, and endeavored to suppress the Lodges. But in vain.... the rigors of the church only served to knit the Brethren [Masonic Brethren] more firmly together...The Lodges became schools of skepticism and infidelity, and the spirit of conversion or proselytism [to spread Masonic Dogma] grew every day stronger. "32

Robison found in his attendance of Masonic meetings that even some of the Church officials like the Prince Bishop Loge de la Parfaite Intelligence mocked and attacked the church in
his talks given at the Masonic Lodge and this while many of the other Lodge members were dignitaries in the church.33 This type of thing is still continuing. Today some of the most important "Christian" ministers who are Masons have only contempt for Christianity once they have the Lodge's secrecy to talk.
--------

Comments for "The Jewish Character of the Early Masonic Lodge"

Alright Tony, I suppose someone has already thought of mailing to congress and yet things still have not changed... That being the case, the only way we can truly grab there attention is by simply cutting off their life line; stop paying taxes. Set up your pay stubs so that you have to pay as little as taxes as you have to, and when tax time comes up, do not pay. If we the people have to show these (as you call them), " spineless whores" that we mean business, so be it. When the time comes that they begin to revolt and compel us to pay up by military force, it simply becomes a matter of who draws the gun first.

Some quotes from the very end of a short book translated from the French to Arabic by one Awad Khoury - and subsequently translated to English. The book is named "The Origin of Masonry" but is on the net under "Dissipation of the Darkness, History of Masonry" at > http://heygeorge5.tripod.com/id5.html

I don't know if the internet copy is exactly like the copy I own. It appears the quotes that end the book may not be part of Khoury's history of the origin of Masonry but could have been added in the English edition.

A few of the quotes, the finishing ones, at the very end:

"Joseph Lehman, Catholic Priest, wrote the following: 'The origin of freemasonry must be attributed to Judaism, certainly not to Judaism as a whole, but at least, to a perverted Judaism.'

"Nicolas Serra-Caussa states: 'The inventor, founder or introducer of the Masonic system, if he was not a Jew by circumcision, was as much a Jew at heart as the best of the circumcised, for Masonry breathes Judaism through its four sides.'

"The rabbi, Isaac Wise, wrote in 1855: 'Masonry is a Jewish institution, whose history, degrees, assignments, signs and explanations are of a Jewish nature from beginning to end.'

"The Jewish historian, Bernard Lazare, wrote: 'It is evident there were only Jews, and cabalistic Jews, in Masonry's origin.'

"And finally Herzl, the founder of Zionism, in 1897 in Switzerland, said: 'Masonic lodges established all over the world offered to help us achieve our independence. Those pigs, the non-Jewish Masons, will never understand the final object of Masonry.'"

I worked and lived in that center of evil, a couple of blocks from the Capitol, in DC. I must let Cris [below] know that writing letters to congressmen is a genuine waste of time. You can get to congressmen, but not that way. I've seen congress reverse itself twice. The first time was when they "outlawed" home schooling. The home school organizations sent the word out and ALL PHONE LINES IN CONGRESS AND IN THE OFFICES OF THE MEMBERS OF CONGRESS WERE TIED UP FOR AN ENTIRE DAY. NO CONGRESSMAN OR SENATOR COULD CALL OUT FROM THEM. IMMEDIATELY THE STATUTE WAS RESCINDED.

I can't recall what the other reversal was but it happened the same way. They READ NO LETTERS. They have their staff stack them pro & con and maybe glance at the piles.

"Normally" the only people congressmen and senators give the time of day are lobbyists, of which the town is overrun. Poor people are paid ten bucks an hour to stand in line before the congressional office buildings all night until morning - rain, snow, or whatever. Right before the doors are opened these people - long lines of them - are replaced by lobbyists who then do their sales pitch and (obviously) find ways to get the money into the congressional prostitutes' pockets. This is how your congress actually operates.

Your only chance is in gross numbers of people tying up the phone lines. If emails can still tie them up, fine, send emails. Call too. But it must be done by thousands at the same time. If these "tea parties" really want to make an impression on congress this is exactly the tactic they will use.

Understand that only you think of congress as representing you. Congressmen and senators do not in the least. They are a bunch of spineless whores and will go for the biggest cash wad or the most pressure, whichever comes at them. No one knows this better than the Israeli lobby, which "works" these whores tirelessly, enriching them and getting them elected over and over again - mostly with your tax dollars which are shoveled into Israel without end.

It appears as though many people, who watch conspiracy "YouTube" videos, have political discussions on government, question the bailout plan, asking themselves, "Why are we still in a Middle East war?" etc. Are simply blowing off mean less energy unless there is a deliberate change in the system we live in. Reading and watching is great for the understanding of what exactly is going on in this world, but the elite continue to do as they pleaseâ€¦ What you are doing Mr. Makow is great and nobody could ask for more. However, in making any changes, you (considering that you have some attention due to your web page) need to advocate your viewers to writing emails and sending letters to congress after every article posting, and showing the viewers that this may only be the way, (without picking up guns) to show congress that we are not all ignorant sheep and that we demand justice in this country.

I strongly believe that if the people listen closely and lets congress know that we are still strong Americans, then they will subdue to our WILL.