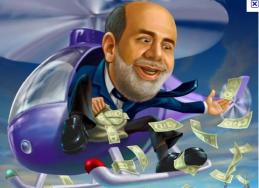 Fed's Trillion$ Purchase of Bonds is a Fraud

The nine PRIVATE Banks that OWN the (so-called) "Federal Reserve" aren't going to "buy" a (near) Trillion in U.S.Government Bonds using any "money" of their own! Their "purchase" is a  FRAUD!
At a cost to the "Federal Reserve" Banksters of only ink, paper and labor, our Treasury's hired printing presses will print off a TRILLION in "Federal Reserve" paper "Dollars" - backed by nothing but thin air!
With that Trillion in "legal" play-money (manufactured out of thin air) - the Fed Banksters will "purchase" a Trillion in REAL Government Treasury Bonds - obligating future American taxpayers to re-pay the Fed Banksters a Trillion PLUS Interest, in REAL money!
At least the Chinese purchased US Bonds using their own REAL cash!
The Trillion in added Federal Reserve "dollars" will cheapen the purchasing power of all existing dollars in circulation.
If our Treasury ignored the Fed and (as our Constitution permits) directly printed a Trillion in new Government dollars, put them into circulation, it would still cheapen existing dollars - but future taxpayers would NOT be indebted to pay anything to the Private Fed Banksters!
Now that Republicans have regained power, here's an opportunity for Ron Paul and his son to SPEAK OUT- and DO something!
------------
Following comment is from TONY BLIZZARD (retired feature writer for "The Spotlight" and "American Free Press" and an expert about the Fed.)
Dick, it's worse than that.

For that volume of money no cash will be printed.  It'll just be computer blips, which will cost the fed NOTHING.

Also, if the treasury actually did print honest, real money they should also have the balls to tell the fed to PULL THAT AMOUNT OF THEIR PHONY CREDIT "FEDERAL RESERVE NOTES" FROM CIRCULATION.  In other words, cancel that much phony debt.  Then, beside saving the people that phony interest and principle, there would also be no inflation.

A fed note today is worth maybe a cent and a half of a pre fed dollar so what difference does it make even if they are cheapened more?  They're damned near worthless now and the bankers are sitting on all that bail out money, not circulating it, because they know damned well it would be the end of the fed, if not the country.