The Other Charles Lindbergh 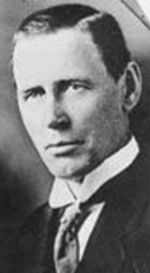 "This act establishes the most gigantic trust on earth.... When the President signs this act the invisible government by the money powers, proven to exist by the Money Trust investigation, will be legalized."

Charles A. Limbergh Sr., father of the famous aviator, was the fiercest opponent of the Federal Reserve Act. A nation that has been subverted and colonized by an international financial cartel is denied knowledge of its rightful heroes. Charles A. Lindbergh Sr. (1859-1924) was one of its greatest.

Excerpt From "The New American"


Exhaustive study of banking led C.A. to believe there was a powerful conspiracy working to centralize financial control in the hands of a few, and he did his best to expose it.

"The remedy for our social evils," he said, "does not so much consist in changing the system of government as it does in increasing the general intelligence of the people so that they may know how to govern.... If they do not learn how to govern themselves intelligently, Socialism will be the result."

Lindbergh found secret collusion between Southern and English bankers at the time of the Civil War, citing proofs in his 1913 book, "Banking and Currency and the Money Trust". He published there the text of the 1862 "Hazard Circular," which revealed how labor would henceforth be controlled by the amount of currency the bankers permitted in the market, since chattel slavery would be abolished by the war. ...

Lindbergh accused Members of Congress of meeting in secret to determine which currency bill would pass and what type of Federal Reserve System should be established to please the Establishment.

"The correct name for a caucus," contended the Congressman, "is 'conspiracy.'  The conspiracy here is to usurp the powers of Congress, and do as little for the people as it is thought the people will accept. I have been fighting the caucus system and the secret meeting of committees ever since I came to Congress."

Time and again the plans of the money manipulators had to be revised because of exposure by Congressman Lindbergh and his associates. Indeed, according to "The Lindberghs" by Lynn and Dora Haines, the Congressman was himself offered a bribe of two million dollars -- big money today, but then an astronomical sum -- to stop the circulation of his book, Banking and Currency and the Money Trust.

A question arises. Why didn't the Insiders of the banking establishment, "go out and defeat him? They tried repeatedly. I once asked an Old Guarder why they didn't succeed: His explanation was interesting, and possibly had some significance. 'We spent so much money,' he said, 'trying to lick Lindbergh that the district became too prosperous to care about a change.'"

Discussing the Glass-Owen Bill, now known as the Federal Reserve Act, Representative Lindbergh and a few others noted on December 22, 1913, that it was nothing more than a resurrection of the repudiated Aldrich plan. "This act establishes the most gigantic trust on earth.... When the President signs this act the invisible government by the money powers, proven to exist by the Money Trust investigation, will be legalized."

The Money Trust referred to "An established and well-defined identity and community of interest between a few leaders of finance which has been created and is held together through stock holdings, interlocking directorates, and other forms of domination over banks, trust companies, railroads, public service and industrial corporations, and which resulted in a vast and growing concentration of control of money and credit in the hands of a comparatively few men...."

Lindbergh explained that this "Money Trust caused the 1907 panic, and thereby forced Congress to create a National Monetary Commission, which drew a bill in the interests of the Money Trust, but Congress did not dare to pass the bill as coming from that Commission. The main features of that bill, however, were copied into this [Glass-Owen] bill. In 1912 I made a speech predicting that that would be done, and, further, that the Money Trust would cause a money stringency in order to force its bill through Congress. All this has now taken place. This bill is passed by Congress as a Christmas present to the Money Trust."

The invisible government, Lindbergh said, had come up with a new scheme "to make the people believe that the trusts are opposed to the very thing that the trusts favor. It is assumed that the people will favor what the trusts openly claim to be against. Smoothly the Money Trust has played a game of fake opposition...." And Congress obligingly tossed the conspirators into their favorite briar patch.

The bill that created the Federal Reserve System was nothing more than the Aldrich plan in disguise, which Lindbergh opposed because "Wall Street, backed by Morgan, Rockefeller, and others would control the Reserve Association, and those again, backed by all the deposits and disbursements of the United States, and again backed by the deposits of the national banks holding the private funds of the people, which is provided in the Aldrich plan, would be the most wonderful financial machinery that finite beings could invent to take control of the world." In fact, shortly before the end of his congressional career, C.A. Lindbergh formally moved to impeach the members of the Federal Reserve Board and offered a 15-count indictment of their conspiracy. The motion was buried in the Judiciary Committee.

Now, according to The Lindberghs, there were "detectives shadowing him much of the time, and he was given to understand that it would be safer for him if he was to change his tactics. In speaking of this to a friend, he said: 'They ought to know by this time they can't scare me that way, but they may get me yet.' "In a subsequent campaign, when shots were fired at the Lindbergh car, a companion declared that "C.A. sat up straight" and directed the driver not to drive so fast lest "they will think we are scared."

Faithful to the End

In the end it was Lindbergh's anti-conspiracy foreign policy that helped the conspirators to "get" him. A proponent of neutrality in World War I, he wondered how America could, on the one hand, follow the Monroe Doctrine and, on the other, involve itself in a foreign war outside our hemisphere. But he was strongly for military preparedness and certainly no pacifist. "Convinced that an inner circle,' composed chiefly of financial interests, was promoting American intervention, Lindbergh became clearly identified as an opponent of war throughout the neutrality period," reports Bruce Larson. Lindbergh warned: "It is my belief that we are going in as soon as the country can be sufficiently propagandized into the war mania."

Congressman Lindbergh had never been one to vote the Party Line. Indeed, he came to realize "the plain truth is that neither of these great parties, as at present led and manipulated by an 'invisible government,' is fit to manage the destinies of a great people, and this fact is well understood by all who have had the time and have used it to investigate."

Seeking to increase his influence by going directly to the people, Lindbergh announced he was stepping down from Congress. He would never again hold public office, though he later ran for both Governor of Minnesota and U.S. Senator, the former campaign (in 1918) being one of the dirtiest in American history.

Once the U.S. joined the war, Lindbergh supported the effort: "the thing has been done, and however foolish it has been, we must all be foolish and unwise together, and fight for our country." He offered his services to the Governor and the President, and was asked to serve on the War Industries Board. That is, until his political enemies questioned his loyalty and used war hysteria to force C.A. to resign. One of the points of contention in the 1918 gubernatorial race centered on a little-circulated book Lindbergh published in July of 1917, entitled "Why Is Your Country at War," written, C.A. said, "to emphasize independence." It was widely, and falsely, labeled as seditious.

A national campaign was launched to destroy C.A. and be rid of his conspiracy theories forever. The Non-Partisan League, with which he was then associated, was frequently denied the right to assembly; and mobs raged against Lindbergh, who was stoned and hanged in effigy. Plates of his book, and the even more important earlier one on the banking conspiracy, were destroyed. Lindbergh supporters were often arrested without warrants. The New York Times called the distinguished C.A. Lindbergh "a sort of Gopher Bolshevik," and the Duluth Herald titled one of their typical anti-C.A. editorials "Traitor or Ass."

After the war, C.A. Lindbergh was rightfully critical of the Versailles Treaty, noting that President Wilson "has his pay now for trying to tie us to a world war machine." A losing race for Senator in 1923, running on the Farmer-Labor ticket with young Charles flying him about in an airplane, was C.A.'s last campaign. A year later, he was dead. From a plane above the Lindbergh homestead, his son returned the ashes of C.A. Lindbergh's cremated body to the land he loved.

"The Other Charles Lindbergh" is taken from an article that originally appeared in the May 1977 issue of American Opinion, a precursor to THE NEW AMERICAN. The original article, entitled 'Lindbergh: Two Generations of Heroism," covered the lives of both the elder Lindbergh and his famous aviator son; the article as it appears here focuses on C.A. Lindbergh Sr.

Comments for "The Other Charles Lindbergh"

Good, was wondering when someone was going to get to the point of the civil war as an attempted coup d etat and Lind's father's role in exposing it. Nowhere is this taught even at upper levels in US history at our various institutions of "higher learning". Intervening assasination of US presidents (not just lincoln) a study point leading up to Wilson...