UK Activists Get Offer From MI-6 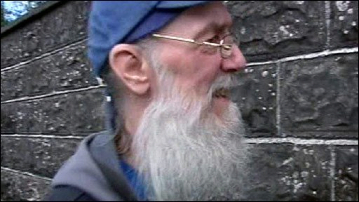 Anthony John Hill, left. His supporters have been contacted by men with badges who want to "help" Hill skip the country and avoid a very embarrassing (to the Illuminati) trial.

By Friends of John Hill
(for henrymakow.com)

Until they get some sort of personal jolt, people don't realize just how bad things have become over the last ten years.   Those behind the "Establishment" are very careful not to interrupt the booze and diversions, but things are rapidly deteriorating. The downward spiral is just slow enough that the vast majority of people, even within the "truth-movement", cannot see it happening from day to day.

But then that day comes for you.  When everything gets a little more real, a little more serious, and someone makes contact "out of nowhere", claiming they want to "help" your cause.

To set the scene a little bit for reference ...

With his court trial coming up very soon on the 9th of May, most/many people have now heard about the situation with 7/7 Truth-activist "Muad'Dib" (aka John Hill).  For those that don't know, he made a film ("7/7 Ripple Effect") completely exposing the events of 7-7-2005 for the false-flag that it definitely was, and because the film is so credible, the NWO-people came after him.

First, a BBC hit-piece and character-assassination was done on Mr. Hill ("Muad'Dib").  Then he was arrested at his home in Ireland during a raid where the police stole all his computers, hard-drives, DVD-burner(s), printer, research paperwork, and anything else they thought could possibly be used to continue spreading the Truth.

They of course took other things they found not even related to the 7/7 issue, including documents he could use to defend himself in court.  The information had already become uncontainable on the Internet, but they tried their best to silence him, though their efforts backfired, when arresting Muad'Dib created another frenzy of interest.  He was then eventually extradited to the UK as a "terrorist" after a lot of corruption in the Irish courts.

After his first arrest, friends of John Hill put-up a website at Mtrial.org, where information about his legal-issues could be provided to anyone interested.  On that website there is an email address to contact those that maintain it.

Out of nowhere, someone named "Darcia", from no less than "The House of Darcia", wrote to the Mtrial.org contact email, starting slow and gentle, like police are taught to do, attempting to sniff out who/what they were dealing with.  The initial contact started like this:

I have been asked to take an interest in your case by an associate, however I am not sure of how to aid you. I have looked into this matter, and you will find that the New Order of Ages had nothing to do with the imprisonment, at least not directly... Do not worry about encryption for this e-mail, the New Order would not dare read my messages. They fear me, for I have acted against them once before in history... If you wish for my aid I will see what I can do. I work for an older group than the New Order, I am what you might call the Old Order... My goal is not the same as yours, but I am not your enemy, nor am I a friend of the New Order. ~ Darcia"

Many things wrong here.  First, we know these Satanists love their childish symbolism and the name Darcy/Darcie means, "Dark one", or "Of the dark". Darcia is a derivative of that.

Thus, the "dark ones" (establishment-agents) start with a vague offer to "help", or in reality, begin fishing for information immediately.  "I am not sure how to aid you" is just bait. Their data-mining efforts were constant throughout because it's the easiest thing of value they can get out of such attempts. Beware of data mining!

They also spread disinformation, claiming the NWO-people are not behind John Hill's imprisonment.

So the Irish police, MI6, "counter-terrorist" police, the BBC, various judges, the European court-system, and random front groups like fake-opposition and government-run "J7 campaign", ALL decided they hated Muad'Dib at the exact same time?  No one up top directing things?  C'mon.

Other excerpts from "Darcia" then followed:

"If a man is imprisoned for speaking his mind then it is too late to do anything."

"Unfortunately for you, however, your enemies would not be harmed by one man going free... Nobody would 'wake up' or realize the problems in society. Each year hundreds of cases, much like your own, are formed. And each year many fail, and yes some succeed, but there is no lasting effect... You must understand there is so much more at stake than this one man. Every single charity and event, such as yours, work for their own ends. They do not see outside of the box."

Remember that this is from someone claiming to want to "help"!  They even get a bit desperate and insanely try convincing us to want John Hill to be found guilty and remain imprisoned:

"Did you ever consider that if the courts find Muad'Dib guilty then more people will realize the lack of freedom of expression than if he is found innocent? After all; a man found not guilty is a victory, and a victory will never gain you support further to this point... if he were to be locked up, those others would realize just how limited their so-called freedoms really are."

Please note, and this is no joke, "Darcia" was claiming to be head of an "Old World" South American dynasty, taking five minutes to setup a Facebook account to back these claims.  But while using this cover-story, "Darcia" replies during British waking hours, says and spells words like the British, and, even though everything can be spoofed online, all the messages coming from "Darcia" were visibly originating right back in London where John Hill's enemies live luxuriously.

Surprise, surprise...  After weeks of conversation, "Darcia" became impatient and forceful, eventually planting the long-expected seeds for a "meeting":

"I am afraid our constitution would not allow me to throw away treasury money for a foreign national. On the other hand, legal aid I could be able to arrange. I will need to speak with my contacts in your country. I may also need to have one of my officers meet with you. Would that be a problem?"

There were a number of times when words or sentences were used unnaturally, and the specific word "officers" stands out pretty glaring.  This is the result of having to comply with legislation preventing entrapment.

"Darcia" then tried further, stating this much more boldly:

"You ask for truth; a meeting can provide that. My officers have identification documents and uniforms so that you will know we are real. They can also work directly to investigate this case themselves, and give you more information. Where, when, how, that is up to you... Do you have a contact number one of my staff can contact you on if they need to?"

Blatant, right?  NEVER give out telephone numbers used to track and profile.  "Darcia" is saying, "Just good things IF you expose yourselves to my officers ..."

"My officers have identification documents and uniforms so that you will know we are real."

"The dark one" ("Darcia") states blatantly that officers are going to show up with IDs and in uniform, so that we will KNOW they are real.

Lastly, when Muad'Dib was to be released on bail (a whole other corrupt saga), "Darcia" actually made a COMPLETELY illegal offer of "helping" Muad'Dib flee the country (which he absolutely never wanted to do):

"I may be able to offer yourself, Muad'Dib, and your staff a place to live should you wish to leave England. Should he reach bail and you be left with no other option other than to escape, I would allow this and not see it as a dishonor. Running from a lawful arrest is dishonorable, but to run from corruption is not."

This statement makes it an official and COMPLETELY corrupt, illegal, unlawful, and immoral police-state entrapment attempt...

These messages are shared with the Truth-movement so that everyone remembers to beware of wolves in sheep's clothing.  It is also shared in hopes of exposing corrupt police-state tactics, so that they STOP being extremely evil by attempting to entrap innocent people for doing nothing wrong.

Please show your support for Muad'Dib/John Hill during his trial May 9th at London's Southwark Crown Court, where he'll be exposing Elizabeth and the wider British establishment for what they are--CORRUPT.

Long version of this article