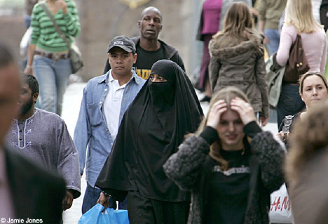 After posting "Is the Illuminati Waging War on Whites?" Monday, I received this timely article.
There is a distinction between immigration which serves the needs of a society, and mass migration which is used by elites to dilute, divide and subdue it.

by Daniel
(for henrymakow.com)

"Genocide involves the attempt to achieve the disappearance of a group by whatever means. It does not have to be violent, it could be a combination of policies that would lead to a certain group dying out."  Malcolm Fraser (Prime Minister of Australia 1975-1983)
+ + +


Two passports are given to UK immigrants every minute. 1,500,000 were issued since Labour was elected in 1997.

The former UK Labor Party immigration minister, Phil Woolas, admitted Feb 25 that his own children have 'suffered' because the influx of migrants has taken a toll on local communities and services.

Tens of thousands more immigrants were also given the right to settle in the UK, with the total up 30 per cent to more than 190,000.
Quarterly immigration figures, published by the Office for National Statistics, also showed a 30 per cent increase in student visa numbers last year compared to 2008.

The Government said the public stance was down to 'racism' and ministers were told to try to alter the population's attitude.

The approach was unveiled after a document from 2000 showed that ministers were advised that only the ill-educated and those who had never met a migrant were opposed to immigration.

They were also told that large-scale immigration would bring increases in crime, but they concealed these concerns from the public.

Sections of the paper, which underpinned Labour policies that admitted between two and three million immigrants to Britain in less than a decade, have already been made public.

These have showed that Labour aimed to use immigration not only for economic reasons but also to change the social make-up of the country.

Now we turn to Australia:

The European character of Australia can be eliminated by swamping the nation with Third World immigration.

Genocide by migration can succeed via several factors:

- High rates of immigration from the Third World, especially Asia.

- Increasing the number of student visas issued, making it easier for foreign students to remain after graduation, guaranteeing that immigrants will be better paid and achieve higher social status than native-born White Australians.

- Lower birth rates of those from British/European backgrounds, via pressure from taxation and the transfer of benefits to non-White immigrants.

One legal barrier to enforced globalization is The Convention on the Prevention and Punishment of the Crime of Genocide that was approved and proposed for signature and ratification or accession by the United Nations General Assembly Resolution 260A (111) of December 9th, 1948.

Article 11 states: "In the present Convention, genocide means any of the following committed with intent to destroy, in whole or in part, a national ethical, racial or religious group as such: ... (b) Causing serious bodily or mental harm to members of the group; (c) Deliberately inflicting on the group conditions of life calculated to bring about its physical destruction in whole or in part; (d) Imposing measures intended to prevent births within the group; ..." Unfortunately, this convention is widely ignored.

Phillip Ruthven, Director of Australia's Ibis Business Information, has forecast a "neo-Eurasian nation" by 2010, turning "Eurasian" by mid-century, and becoming "Asian" at the end of the century.

Various Establishment politicians, from both sides of the political fence, have revealed their support for the Asianisation or Eurasianisation of Australia.

John Gorton (Liberal Party), when Prime Minister, said in 1971, "I think if we build up gradually inside Australia a proportion of people without white
skins, then there will be a complete lack of consciousness that it is being built up... and that we will arrive at a state where we will have a multi-racial
country without racial tensions - and perhaps the first in the world."

The majority of the population in Australia will eventually be of Asian/Eurasian background.

Just as the Chinese have practiced necessary ethnic cleansing in Tibet, and Indonesian administrators infiltrated alien populations into West Irian and East Timor, so eliotes can infiltrate outside genotypes into the Australian territory to achieve the gradual disappearance of the White Australian host.

The advent of Australia as an Asian or Eurasian country will mean the end of the European national and cultural identity and way of life. Gradually the offending base element will die out, allowing global governance to come about all the sooner.

Australia's geographical isolation serves as an excellent laboratory for the more wide-scale programmes underway in Europe and North America. At the present time, people of European racial background make up approximately 8% of the world's population. That figure is quickly shrinking.

I am all for the promotion of cultural nationalism, but the irony of a white man crying over the loss of whiteness in a land that was up to two hundred years ago Eurasian is more than my Irish blood pressure can handle.

Having visited Australia, and seeing her native population still under the oppression that no longer pervades Native Americans (ie, lack of basic human rights, land ownership, cultural sensitivity), opinionated people like Daniel, who deem anyone else who is not of his particular background a threat, makes me ill. Up until the Seventies, Daniel's 'people' were taking the children of NATIVE Australians away from the parents and culture of their people (stretching back over 4000 years) to 'Westernize' and 'educate' them to become houseboys and maids and eventually the Underclass.

The attitude of White Australians towards Indigenous Australians is appalling. Daniel forgets he is not a native, but an immigrant himself.

This may be no great loss for although the Union Jack remains on the Australian flag no-one I know mourns the loss if the right of appeal to the Privy Council except me, nor has the slightest clue about what may be in Magna Carta 1215, nor has an inkling that Common Law trumps Legislation etc.

Also religions such as Jainism, Hinduism and Buddhism have a higher standard of morality than those of the Bible as they encourage Ahimsa (non-violence - vegetarianism).

I'm a muslim of Indian ancestry. im from South Africa & my family has been here for 4 generations now. its a bit of a mystery why white people in western countries have such low birth rates since they are amongst the wealthiest
people on the planet and can generally afford to give their children everything they need.

The immigrants, on the other hand, earn generally much less and make do with whatever they have but still have a much higher birth rate.
its not that they are maliciously trying to wipe out the white race, the problem is the attitude of the whites themselves. you whites have lost your religion, morals & family bonds much faster & to a much greater degree than the
immigrants. abortion, divorce, extra marital relations, working women etc first
became common amongst the white man, then it has spread to the rest of the world.

then we come to the issue of the greedy zionist pigs stealing the wealth of other nations and using it to develop your lands since they are living there as well.

if the mineral wealth & natural resources of these "poor" nations was not being
usurped and was instead used to develop these countries etc, do u think all these millions of migrants would be interested in leaving their homelands and coming to the west?

puppet governments & regimes have been installed by your leaders to ensure that the prime beneficiaries of the natural wealth of these countries are not the people themselves but westerners.

i know that previous generations of white men in western countries worked very hard(& some still do) but it would not be fair to say the standard of living & infrastructure you enjoy today is because of their efforts only.

instead of complaining about immigration, why dont you rise up and get rid of the rot & corruption in your societies which is the cause of all this?

i would love nothing more than to see all of you accept islam but at least follow the religion you profess to follow. if you claim to be christians, why dont you all follow your religion as it ought to be followed? and to you atheists, im sure you still have a sense of right & wrong. use it.
maybe im not explaining myself clearly-i know i

just found your article on treason by immigration and thought you
might like to see this if you haven't already. It's not just
treason it's genocide. The video is based on a letter that was
sent to the Minister of Immigration and you can find a copy of that
below.

Love this article as it has very very personal coincidences with me.

I live in London,but I have wanted to live in Australia with the 95% of my family that went over there in the late 60's,early 70's....for 24 YEARS..I only have 2 relatives here.But,as far as applying to go live there.....its draconian !.I'm just your average Joe....but, the immigration form informs me that to go live there requires the following.That I be a Doctor or Lawyer type,have had the same job the last 6 YEARS and NOT had one day off in the last 4 YEARS !....And have AU$60,000.00 in my bank account !.

And now I read this article......pretty much what my relatives all tell me,all the time !!!!.

What ticks me off most,apart from all of this police state stuff,is the fact Australia is a so-called common wealth country....and even has the Union Jack Flag within its own flag......you'd think all the poor stifled white folks in the UK would be given an EASIER RIDE into a VAST CONTINENT of only 17 million.....! And thats another thing,....I have heard Australia's population is 17 million the last 30 years......whats going on there !?

Daniel Legare talks about the destruction of white society in Australia, but he makes no mention, at all, of the attempted complete assimilation of Australian aboriginals, and the violent, terroristic, phenomenally successful genocide of the Tasmanians.