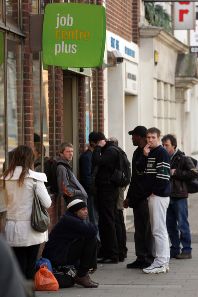 Welfare has replaced the provider, "creating a glut of unemployed, unwanted, unmarriageable men."

In declaring war yesterday on both poverty and the benefits system, Iain Duncan Smith had it right. If the Government is going to make real inroads into the deficit it will have to tackle the nearly £200 billion ($300 billion) welfare budget, which is a third of government spending. This week's £6 billion of cuts was only Round 1: £6 billion is only 1 per cent of government expenditure, so this was a warm-up.


But the argument for welfare reform is not just one of affordability. In too many cases, welfare has entrenched poverty. ... Gordon Brown made life more bearable for many people on benefits, but he also made it harder to escape from them. Get a job tomorrow earning between £10,000 and £30,000 a year and you'll take home only 30p out of every extra pound you earn after the first £10,000....

The fear of losing benefits -- of not being able to scramble back on to the lifeboat if you fall off -- is a huge disincentive to change your circumstances, let alone report them.

One-in-seven working-age households is dependent on benefits for more than half its income. More than half of all single parents depend on the State for at least half their income.

William Beveridge would be horrified to discover that the safety net he designed has become a trap, creating generations of worklessness and dwindling self-esteem. It is also creating a glut of unemployed, unwanted, unmarriageable men.

Immigration reduced the opportunities available to white British men whose poor education made them less attractive candidates, while the benefits system undermined their motivation.

The problem affects the whole of society because of the striking correlation between male joblessness and single motherhood, particularly in the old industrial cities.

Similar patterns can be seen in Birmingham, Strathclyde and Newcastle. The epidemic of male joblessness after the collapse of manufacturing industries coincided with an increase in female employment and welfare support to mothers who found that they could manage alone.

Overlooked by society, irrelevant to employers, unwanted by women who can raise families on benefits without their help, the man who has no work or a series of short-term jobs is a problem.

Without steady work, he will struggle to acquire a family: unemployed men are less likely to marry or cohabit than employed ones. Without a stable relationship, he is less likely to grow into a good family man and raise good sons.

RECALLS THE FATE OF US BLACK FAMILIES

The taxpayer has become the father: one in four mothers is single and more than half live on welfare. A lot of these women describe the real fathers of their children as "useless" or worse. The men have no role.

In the worst cases, the State has helped to create a class of jobless serial boyfriends who prey on single mothers on benefits. When two of these men moved into the flat that Haringey Council had generously provided for Tracey Connelly, Baby P's mother, the little boy's fate was sealed. They killed him.

Other such men appear in bit parts in tragedies such as that of Shannon Matthews, abducted and drugged by her own "family". The welfare system has helped to deprive these children of the most effective check on abuse -- the family.

Robert Rowthorn, Professor of Economics at Cambridge, has shown that female and male worklessness have been going in opposite directions for 30 years, well before this latest "mancession".

His research suggests that half the rise in lone parenthood in the past 30 years may be due to male unemployment. He believes that governments must start to focus on these men, and question the feminisation of education and the workplace.

It is no solution, he says, to say that women don't need men or that men should become more female. Nor is it any good waiting for economic growth to dig them out of poverty. Those men need a chance, not a benefits system that undermines them.

'Where no father knows his son and no son knows his father'. The men and women in this article voluntary submit themselves to the control of the State, but they don't know why. Sure these men and women sound like collateral damage, but the next generation not really knowing their father will be loyal to the State without question.

Sure under the Common law no one can force you into a contract, but the State achieves your consent without you don't even realizing it. For example, when these men and women get married, they get a marriage "license" from the Government.

Getting a marriage "license" means in the Government's eyes that you're not responsible enough, and therefore you need their permission. Now if you let Gay people get married and let them adopt, even better, because who knows then who the father is.

However in theory and hypothetically speaking, there is a way to defeat the State without taking up arms or making threats. Very simple, strengthen the family unit and learn NOT to want. You teach everyone in the family to be loyal to the family and not the State.

Unlike Plato's Republic, it doesn't work in real life. Plato tried twice to implement his theories and they didn't work. There's something about human beings that makes them want to be free. So maybe the Government should listen to us, and not pretend to listen or pretend to be sympathetic.

Remember we are worth money to the Government. That's why they give us a birth certificate, and the longer we work in years (the period of production), the more money we are worth to them.

That's why the Government always want people to "participate" in working, that's why they want women to quickly have babies and quickly get back to work. 'Participation rates' are very important to the State, we are like a battery to them, like in the movie the Matrix.

Within the discussion of unemployment and welfare, there is a key issue that I find remains unexamined by most commentators.

The jobs that have been eliminated by mechanization and computers will never come back, unless the society becomes demechanized and returns to the 'horse-and-buggy days'. Consequently, it is impossible to provide
a 'full-time job' to everyone, and it will become increasingly difficult to provide a sufficient number of jobs, as mechanization and
computerization continue to proliferate. One solution to this problem would be to reduce the hours of 'full-time jobs' to create more jobs.
The US government could redefine a 'full-time job' as 32 hours per week, and require employers to hire more workers instead of paying
overtime to employees already on the payroll. In such a scenario, it could be regarded as antisocial and unpatriotic to 'hog the work for
yourself' by working overtime on a job.

UK Welfare State = Family Breakdown, Emasculated Men article shows nicely the classic NWO idelogical shell game M.O. and how they create and control both the right and left to carry out their long term agenda.

2) Create Feminism to break up family and enable mass immigration to increase labour and decease wages and undermine social cohesion along with feminism.

3) Use welfare as a middle ground to ensnare the native underclass..

4) Bring in the their controlled opposition ‘right’ to blame welfare for all the society’s ills and to force the western underclass into the low skilled cheapened labour poverty-debt cycle of perpetual enslavement .

Just leave to the Murdoch Rothschild to sell the agenda in press and bloodline Cameron to carry out the policy.

hi the Times article missed out one vital point, the removal of men from the family by the family courts, if you read taken into custody by stephen bakerviille and my family court hell by mark harris, then you will get a clearer picture to what is is going on. single parenthood is done by design, the soul aim of this concept of family is to destroy any semblance of what is a consider the norm for a family. So to remove the first threat, is a paramount to these evil men and women who make a living out of the chaos of family destruction.


99% per cent of men what to be involved with their children but are removed by the courts, the police and the social services, of course if you are a homosexual then that is ok.

I am going through the family court system and trying to be involved with the responsibility of raising 5 young children youngest is 3 and the oldest is 10, the courts and the ex do not want to know, they want me to go away, they put massive barriers in the way, to make it difficult for me to see the children.

one child is living with ex parents, even though they have no right to this child, the courts back the mother, i said if the mother does not want to have the child then i will have hm, they said no, it a con. I said am I a good father they said yes but you are not having him, he has formed a relationship with his grand parents, so i said well they have more right than me and they said no, but i countered yes they do they are bringing him up, its evil, its all about money and ideology.

There is no question but that our economic system has been fashioned so as to get practically everybody sucking at the government's teat. The Fabian Socialists, financed by banker Sir Ernest Cassell, set this as their goal well over a century ago, and their concept has been insinuated into every institution in society. Education, the arts, business, etc., all exist in increasing measure at the pleasure of government, which in turn is a front for the money-creating power. The ultimate goal is monopoly and the control of all human initiative, which is supported by "political correctness" inculcated through the school system and the occupation of leisure time with professional sports, Hollywood movies, video games, and so on.

I do question, however, the author's concern about "balancing the budget". This is another control mechanism and a concept reinforcing public acceptance of the banking system's continuing to create the money supply. Of course, if the government were the point of issuance of new credit (not arbitrarily, but in accordance with law compelling its distribution to all citizens as shareholders in the nation), then balancing the budget would become an obsolete concept.