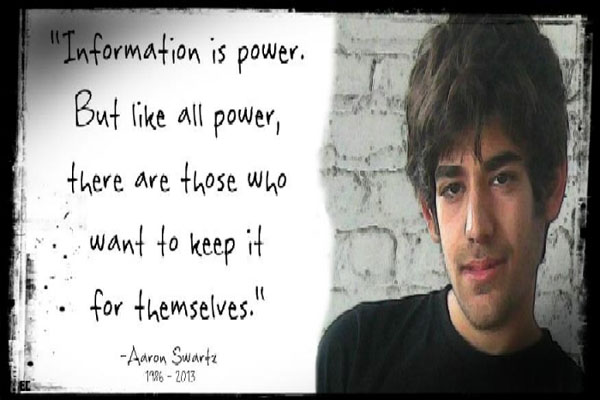 When Aaron Swartz refused to  deal with the devil, did the government "suicide" him?
"You could eat a sandwich in the time it takes to suffocate from hanging.  If he really was as depressed as media says, he could have easily gotten a prescription for Xanex, put on some nice music, light some candles and gone to sleep and never wake up.  Why hanging? "
Latest- Gordon Duff Blames CIA "rogue elements" (right!) -- "No question this was a murder."
by Richard Evans
(henrymakow.com)
Six days ago, an internet activist was found hung in his Brooklyn apartment.  The coroner and Media say he killed himself.
Swartz was no Occupy Wall Street hippie.  At 27, he'd already reached the top of his field.  He was a software genius and Internet champion. He co-authored the "RSS 1.0" a widely-used syndication format. he also co-founded Reddit which was sold to Conde Naste.  He founded Open Library, an internet database dedicated to obtaining public domain documents that had been appropriated by private interests.  He 'hacked' the Library of Congress database and uploaded it to Open Library making it available for free.
The "social media" industry has virtually taken over every aspect of human communication.  This industry increasingly is synonymous with erosion of privacy and commercialism. The movie, 'The Social Network' glorified Facebook's CEO Mark Zuckerberg, as a 'genius' at betrayal of friends and classmates in order to get sex, money, and power.
Aaron Swartz wasn't as famous as Mark Zuckerberg - but he was an effective advocate for freedom of information.  He wasn't  billionaire, or even a millionaire, though he could have been.  Harvard law professor Lawrence Lessig  said, "He never did anything for the money".
LEGAL PROBLEMS
In 2010, Swartz downloaded the entire JSTOR archives because the organization pays the publishers of scholarly articles, not the authors.
On July 19th, 2011, the Attorney General of Massachusetts threw the book at him.  He was charged under the 1986 Computer Fraud and Abuse Act, otherwise known as "hacking".   But this broad, fuzzy law wasn't a good fit for downloading uncopyrighted articles with intent to redistribute.
At the moment, that's not a crime yet.  Making such a thing a crime is what the PIPA / SOPA bills meant to do.  Undaunted by the warning from Federal muscle to "chill", last year Swartz was a significant organizer against the SOPA bill that threatened freedom of information access on the internet.
Lawrence Lessig, said, "The government was not gonna stop until he admitted he was a felon. In a world where the architects of the financial crisis regularly dine at the White House, it's ridiculous to think Aaron Swartz was a felon."
Lessig knew Aaron for twelve years.  He was Swartz' advisor on intellectual property law for Creative Commons and Open Library.
WAS HE MURDERED?
The mainstream media has been doing a snow job to make us believe that Aaron Swartz committed suicide by tying a rope around his neck and hanging himself.
Personally, I think he would have been creative enough to think of a less horrible way to die.  You could eat a sandwich in the time it takes to suffocate from hanging.  If he really was as depressed as media says, he could have easily gotten a prescription for Xanex, put on some nice music, light some candles and gone to sleep and never wake up.  Why hanging?
Hanging is a horrible way to die.  The sentence of hanging was intended to send a message to other offenders "this could happen to you".  I think that's why Aaron Swartz died by hanging.  It's a message to other activists -- probably those he knew who worked with him.
Swartz's father is an intellectual property consultant to MIT's computer lab. At Aaron's funeral, he said his son was killed by the government.
Media has since spun Swartz' father's remark as if it he was speaking figuratively.   Don't you believe it.  I don't like the way mainstream media writers frame  Swartz's hanging as a reaction to 'bullying'.  It implies Swartz was afraid of the government, that he was a coward, or mentally ill.
That's not it. Swartz's career shows the familiar pattern of attempts to assimilate him into the system - scholarship to Stanford, lucrative job under auspices of WIRED,  a fellowship from Harvard's institution on ethics.  All these perks failed to control him, so they switched to Federal muscle tactics.
Each attempt to control him drove him further beyond the pale.  But I think his death warrant wasn't issued till last year when he became an effective leader of a million people and stopped the PIPA and SOPA bills.   Effective leaders aren't allowed.
Bertrand Russell wrote frankly that geniuses would be carefully offered a place with the elite, but those that persisted in bucking the system would be exterminated.  From  "The Scientific Outlook", 1931, Russell wrote;
"On those rare occasions, when a boy or girl who has passed the age at which it is usual to determine social status shows such marked ability as to seem the intellectual equal of the rulers, a difficult situation will arise, requiring serious consideration. If the youth is content to abandon his previous associates and to throw in his lot whole-heartedly with the rulers, he may, after suitable tests, be promoted, but if he shows any regrettable solidarity with his previous associates, the rulers will reluctantly conclude that there is nothing to be done with him except to send him to the lethal chamber before his ill-disciplined intelligence has had time to spread revolt. This will be a painful duty to the rulers, but I think they will not shrink from performing it."
Lessig said "Aaron Swartz is now an icon, an ideal. He is what we will be fighting for, all of us, for the rest of our lives."
I AGREE.
+++
Here's a partial  list of suspicious 'suicides' or 'accidents' of scientists and politicians that bucked the system.
Other sudden deaths of natural leaders. 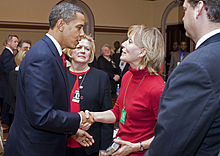 Beverly Eckert organized the 9/11 Family Steering Committee for the 9/11 Commission. Eckert's husband died in the World Trade Center.  She was a prime organizer of families of 911 victims. Within a week of this photo op with Obama after his inauguration in 2009, she died in a commuter plane crash in Buffalo, NY.  http://en.wikipedia.org/wiki/Beverly_Eckert
The "Suicide" of Gary Webb (Shot twice in the head)
Assassination of Sen Paul Wellstone
The mysterious deaths of top microbiologists
'Suicides' of information technology programmers
Politicians and plane crashes (very incomplete) Note John F. Kennedy, Jr., son of former President John F. Kennedy, died along with his wife and sister-in-law when their plane crashed into the Atlantic in 1999.  Had he lived, he could have stolen the Presidential election from Skull and Bones in 2004.
http://www.politico.com/news/stories/0810/40902.html
--
Witness in Polish Presidential Plane Crash found hanged
Swartz Wikileaks Connection

Comments for "Was Aaron Swartz Murdered?"

Aaron was a lucid visionary who discovered that he actually had power to thwart the controlling aspirations of "his" government--definitely a threat to the Establishment. Logically, it is hard to refute his argument (as I understand it) that research being financed out of tax revenue ought to be accessible to the population that is paying for it.

As, indeed, should the records of all government transactions. Such transparency would be easy to achieve in this computer age, and the fact that
it has not been effected strongly indicates that governments have much to conceal from the electorate.

Many suicides are actually murders done by the secret services to look like suicides, then the media plays along and calls it a suicide. They get caught every time. But the problem is "they" own the media and our government, so they can lie to the public while skirting accountability from law enforcement.

I think even the nurse Jacintha Saldanha from the hospital Kate Middelton was staying was actually murdered. I don't believe a wife and mother of 2 children would dare kill herself over a simple mistake. Of course she was killed by James Bond's agency.

I know Rense just like Alex Jones is controlled govt.opposition and the guy's a lunatic but some of his contributors are good. The article is here http://rense.com/general95/swartz.html

Very sad about this young man Aaron Swartz. On a positive note, most need not worry about such a fate since very few are actually doing
anything to stop legislation like Aaron did. He did not simply expose evil, he actually stopped it by hindering legislation (the N.W.O.'s
power-base).

Thank you Aaron Swartz and R.I.P.