"We Day" -- Illuminati Target Our Children 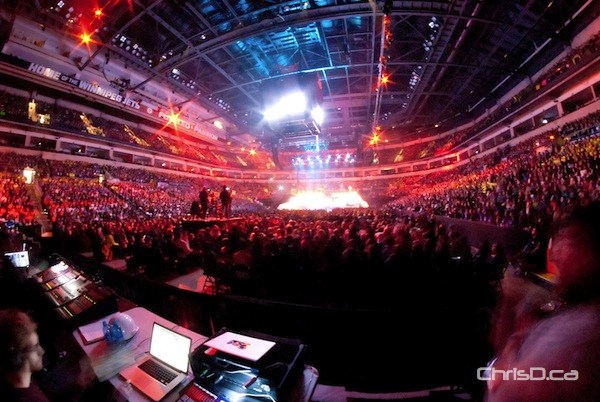 Some 16,000 young Manitobans spent Wednesday getting inspired at the MTS Centre in Winnipeg as part of We Day.
Sound farfetched to say the Illuminati are inducting us into a satanic cult?  The "We Day" program indoctrinate our children under the guise of promoting peace & charity.  Look at the occult dance they are teaching our children. (Below story)
Why would Illuminati heavyweights like Mikhail Gorbachev ( Al Gore and Paul Martin at other venues) take time to address 16,000 school children?
Local Illuminati leaders (Trilateral Commission Member) Hartley Richardson, (Free Press owner) Bob Silver and (Jets owner) Mark Chipman "sponsored" the Winnipeg event.
They keep talking about "changing the world." They are referring to satanic Illuminati rule. This is why the "change" is always for the worse.
by SPH
(from Nov. 2, 2012)
(henrymakow.com)
I had never heard of We Day until my 12-year-old-son asked me if I had any pennies that I didn't want.   This highly publicized event was held in Winnipeg Oct 30th and various dates throughout the year in other Canadian cities.
We Day is self described as "an educational event and the movement of our time--a movement of young people leading local and global change."
The basic angle is that awareness of the world's great injustices and equalities is raised, and then the question that is directed at our children is, 'what can WE do about it?"
Tickets cannot be purchased for this event.  Kids are welcomed for free, but there is a catch.  Each child is expected to commit him/herself to at least one act of local and one act of global charity through Free The Children's year long engagement programs. Free the Children is a charity founded by Craig Kielburger (We Day front-man) since he was 11. 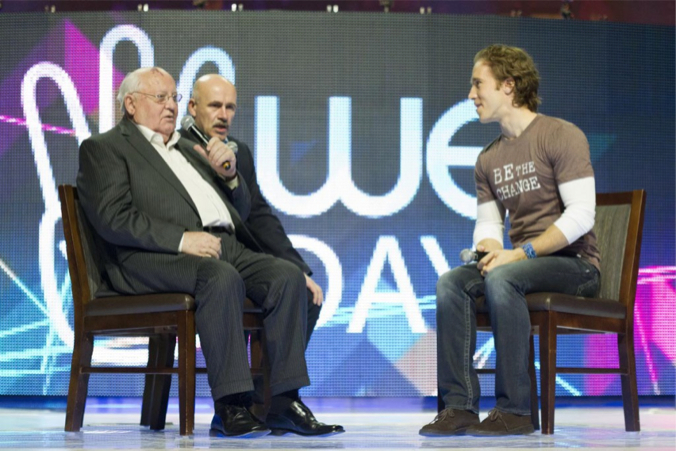 (Gorbachev, forgotten but not gone)
While We Day is not specifically a charity, it works closely with charitable partners, and their goal is to inspire our children to become their fundraisers of tomorrow.  Children are encouraged to attend workshops and even summer camps geared toward activism, public speaking and fund raising. This is very typical of Illuminati Communist recruitment.
All major charitable organizations are fronts for generating cash as well as laundering money, behind a smokescreen of good will.
It doesn't take much investigation to discover that We Day is Illuminati-connected.
Past and present speakers include globalist heavy-weights like Al Gore, Mikhail Gorbachev and the Dali Lama.  They are accompanied by the next generation of world leaders like Ben Mulroney and Justin Trudeau. The day's events will also include a slew of musicians and entertainers to capture the attention of the impressionable crowd, as well as numerous experts in the field of saving our planet from its people.


HIDDEN AGENDA
Although the causes seem noble, they prey on our collective guilt as the lucky ones who live in a developed county.   Like Hitler Youth were indoctrinated in antisemitism, our children are being inculcated in the Globalist mindset.
We Day is "awakening the spirit of volunteerism," and "educating, engaging and empowering socially conscious youth to become agents of change."
The grooming of our children takes place early.  Under the guise of charity, human rights and equality, they are selecting the most creative and energetic of our youth and twisting their sincere efforts in favour of their Satanic agenda.

Proof that all is not quite right with this organization can be easily gleaned from their website.  Immediately my attention is drawn to their logo/hand sign.  It is identical to one of the hand signs of power as illustrated in H.P. Lovecraft's Necronomicon.  Although considered by the mainstream to be a work of fiction, Lovecraft's ties to Freemasonry and the occult are well known.
Also, the We Day dance, among other moves, makes very obvious gestures that go from pointing straight up to pointing down.  Very similar to the gesture for the Hermetic maxim "As above, so below." 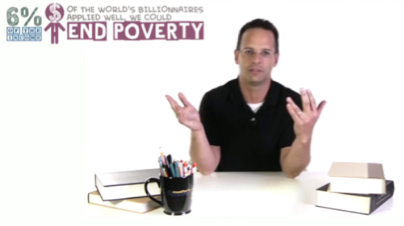 The We Day website includes numerous informational videos on a variety of subjects.  Professor Jonathan White hosts a series titled 'Ask the Professor'  (seen here giving the Hebrew 'shin' hand sign)
One such video on globalism highlights the economic disparity that exists between the developed and developing nations.  Surprisingly it also goes so far as to point out the crooked dealings of international banks that result in a never ending cycle of indebtedness for their world countries.  But as frank as this presentation is, it does not name any specific institutions (IMF, BIS, world bank) as being directly responsible for this very real problem .  There are no solutions suggested.  We are meant to believe that real change comes from collecting pennies.
When the professor asks the viewer "what can we do?" it is followed with some fun facts under the heading "How do our choices as consumers affect the world of wealth and poverty?" 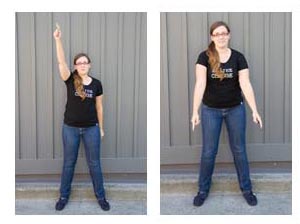 (We Day occult dance, "as above, so below")
We are given figures about the developed world's discretionary spending and the costs of reducing world poverty.   For less than the cost of what we spend on things like cosmetics ($18B) or ice cream ($11B), we could provide basic health and nutrition ($15B) or provide clean water and sanitation ($9.5B) to everyone on the planet.  It also mentions the world's annual military budget at 1.5 trillion, but clearly it is the middle class that is at fault for the state of the world.
He also mentions that $12B would provide "reproductive rights for women all over the world" whatever that means.
Other reasonably radical suggestions are made, such as a 1% tax on the entire world's population could fix everything.
If anything, these statistics make it clear how easily the worlds ruling elite could instantly rectify all of the injustices on our planet, if only that suited their plan. Ultimately the children are left with a nameless sense of grievance.
CONCLUSION
We Day is brainwashing pure and simple.  With catchy tunes, a fun dance and uplifting ideals, our kids are drafted into a cadre, an insipid Western version of the Red Guards. They can be channeled into any number of Illuminati causes.  Little do they know that the hidden hand guiding this and other well funded programs have less than honorable intentions.
-----
http://www.weday.com/2012/10/30/we-day-manitoba-a-civil-rights-celebration/
First Comment from Dan:
I recognize the occultist signatures behind this "We" operation.
David Spangler defined their concept of "holarchy" this way:  "In a hierarchy, participants can be compared and evaluated on the basis of position, rank, relative power, seniority and the like. But in a holarchy each person's value comes from his or her uniqueness and the capacity to engage and interact with others to make the fruits of that uniqueness available."
The way I've seen this actually play out when applied to a group of children or adults is everyone loses individuality in hypnotic group activities under direction of leaders.
When I was in OTO the priest and priestess poses were part of the rituals  - (LVX means light). These people believe physical motions and poses help bend and shape 'force' according to will.

This is done individually or by the group at "Resh", facing the rising or setting sun.
The photo of the girl doing the "We" song, she is signing NOX (darkness) (3rd pose below)
The OTO priest and priestess would demonstrate the poses for us to imitate, without telling us what they thought we were doing.
I had 19th century occultist Pascal Beverly Randolph's opus "Sex Magick" in which he explained that by putting a person into certain positions you can gain control over them. (this gets very near to S&M thinking) 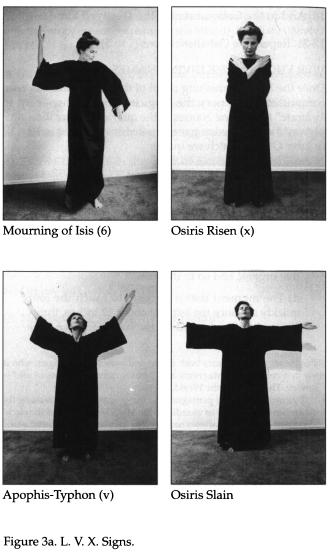 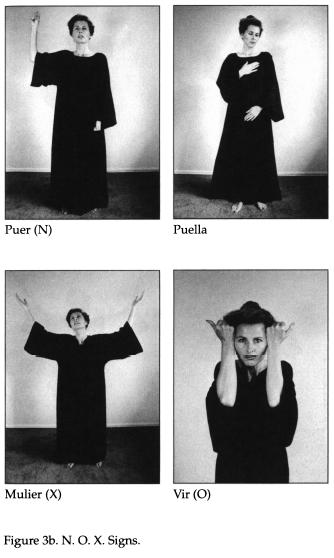 Comments for ""We Day" -- Illuminati Target Our Children "

In the interest of accuracy, I should point out that the "Necronomicon" as HPL wrote about it was completely fictional; he never completed a work that had any kind of hand sign illustrations in it of the sort shown. Any such are the products of much later authors who added to and embellished his works. Lovecraft passed on in 1937.

I heard about this two years ago when it took place in wpg i think, for the first time. cbc was so excited to have al gore visit this city.
it was surreal to hear about it and my heart skipped a beat.

not many i asked had known about it or were paying attention at the time.

this is the scariest development ever, in Canada.

how will we even be able to stop it? "it is for the children" brainwashing tactic works every time. ask health canada. they use it when they want to pass any of their police-state regulations.

I watch educational videos with my nephew and I noticed that they promote in the sidebar Dan Savage and "coming out day"
To me, this is over the line.

If you keep clicking on different ones, eventually the Dan one comes up at the very top of the sidebar
with him being backed by bright colors.
http://www.youtube.com/watch?v=Afqj-FU_ecQ

I could not agree more!

Growing up in NYC & attending public elementary school in the 1960's, I realize now the annual Maypole dance was an occult ritual.

I watched the video http://www.winnipegfreepress.com/breakingnews/Live-coverage-from-We-Day-2012-176411991.html

These kids are being brainwashed - Winnipeg is worse than anyone with these programs.

Slime mold excuse of a human being Al Gore funded this piece of shit in the drive to rebuild credibility for the "Climate Change" aka "global warming" scam that was blown in 2009 when undisclosed scientists released years of internal email correspondence between the perpetrators.

When exposed, they simply go after brainwashing the next batch of humans in the cradle.

Earlier this spring, Al Gore launched the $300 million dollar â€œWe Campaignâ€ with a slick green logo and website to support his non-profit organization The Alliance For Climate Protection.

I just stumbled across your article, "We Day". "Reproductive rights for women all over the world" means access to free abortions and birth control methods (all over the world via the Federation called Planned Parenthood).

REPRODUCTIVE RIGHTS is the 'newspeak', politically correct, elite illuminati sanitized covert jargon for: infanticide or murdering babies in the womb on the tax payers dollar. The Bible calls it, offering sacrifices to Molech, ref. Jer. 32:35.

Thank you for your article; I pray daily for my country.