Why Dads are Afraid to say No to their Kids 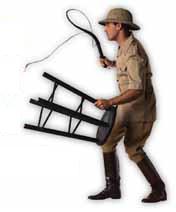 There is nothing suspiciously right-wing or reactionary about parental authority, and it is OK, indeed essential, to impose it.


by Robert Crampton
The Times of London
January 28 2011


Boys need fathers who are prepared to use their paternal authority. So why are so many men with teenage sons afraid to?

Not long ago a friend introduced my wife and me to her new partner by bringing him along
on a weekend away. This new partner brought his two sons from a previous relationship. The boys were aged about 12 and 10, and they came with a warning attached: if not exactly out of
control, they were said to be ill-disciplined, not entirely socialized. In a word, trouble.

We met them and they seemed fine. Boisterous, physical, occasionally argumentative; no more so, however, than my own son, who is 13, or the dozens of other boys of a similar age with whom I come into contact. Then on the second day, the older one swore, quite vociferously, while their dad was elsewhere, so it fell to me to tell him that he couldn't do that.

"What?" he said, not truculently, more in a spirit of genuine inquiry, "Can't I swear here?"

Clearly he'd not heard "because I say so" very often, if at all. I prepared for the worst, thinking that he might complain to his dad, and that it was all going to get embarrassing.

But he didn't complain. Quite the opposite. He digested the "because I say so" for a moment, and then he nodded, said, "Oh, OK", and went back off to play. It turned out that "because I say so" was enough. Was it even, perhaps, what this potty-mouthed youngster wanted to hear? Certainly it was what he needed to hear.

I make no claim for my own ability as a father. I haven't found the secret of paternal authority. I'm feeling my way like everyone else. My son swears too, sometimes, and if it's just the two of us, his mother and sister elsewhere, sometimes I let it go, depending on the words employed. And sometimes, even though I know that consistency is the very essence of
good parenting, I might let a word go one evening and not the next. Not good, but, hey, context is all.

And I recognize that my task with my boy is easier than the task of that father with his boys in two crucial respects. I only have the one son to worry about and he has two, and I am not divorced and he is. He has less time with his sons in which to impose his authority and when he is with them, his efforts are impeded by a measure of guilt about any impact his divorce
may be having on them. I don't have any guilt, at least not of that sort.

But nor do I have what you might call an excess of liberalism impeding my efforts either. I at least recognize that my task is a task, that there is nothing suspiciously right-wing or reactionary about parental authority, and that it is OK, indeed essential, to impose it. I have no problem with "because I say so" and am surprised at the number of fathers who do, with their own sons, let alone anyone else's.

And I say "fathers" and "sons" deliberately because when we talk about a collapse of parental authority in this country what we really mean, stripped down, is a collapse of paternal authority over boys. In a couple of generations, in some parts of society, notably the disproportionately influential liberal metropolitan section circles in which I move, we have
gone from a harassed mother saying "wait till your father gets home" to an indulgent father saying: "Oh, OK, but don't tell your mother." One extreme to another.

But he has authority, and he needs to use it. The most obviously dire consequences of a lack of paternal authority arise when that authority is altogether absent, as it often is for the boys who cause such problems in our streets and schools. It is accepted that many such fatherless
boys find the hierarchy and security they crave in gangs.

Years ago, I interviewed Jack Straw when he was home secretary. "If we could solve the problem of 14-year-old boys," he told me, only half-jokingly, "we could solve half the problems of criminal behaviour."

But the State should be in the business of solving the problem of 14-year-old boys only as a last resort. Really, it's the father's job. It's easy to blame absent dads at the bottom of society.

But you don't have to live with a single mother on a rough estate for paternal authority to be absent. All you need is a father unwilling to use the authority that his role confers.

At the absolute basic level of physical power, at some stage in his early to mid-teens, a boy will outgrow and outmuscle his mother. He probably will outstrip his dad too, but not for a few more years, by which time, all being well, the boy is mature enough not to throw his weight around. At 13, 14, 15 he isn't mature enough.

For those years, it is the father's job to teach the boy the rules and responsibilities that come with physical dominance. The first of these is that you do not exert that dominance unless you absolutely have to, the only exception allowed being the dominance a father must -- not often, but sometimes -- exert over his son.

There was a report by the charity Parentline Plus last autumn after its helpline received more than 22,000 calls from parents concerned about their children's aggression. Seven thousand calls detailed actual physical abuse. The problem peaked between the ages of 13 and 15.
Although the report did not specify, I think that it is safe to say that most of the aggressors were boys. Those families -- and there are many -- dominated by surly, abusive, sometimes aggressive teenage boys are families in which the father has failed to assert himself.

And by asserting himself I absolutely don't mean a whack. The best, most authoritative fathers that I know have never laid a finger on their sons. Besides being reprehensible, hitting your child represents authority abandoned rather than authority demonstrated.

But I do mean standing tall, being physically assertive, staring the lad down if necessary, a touch of old man rather than new man. You are his old man after all. It's not an equal relationship. You're not mates. Later, if you've done your job, when your son is 17, 18, a nice young man, a credit to you and so forth, then you can be mates. But not when he's 13.

I'm not saying that my son is a monster. Far from it. Ninety nine per cent of the time, he's a sweet boy. But then, they're all sweet boys at 13. If you want them still to be sweet at 17, you have to show them who's boss.
A lot of dads throw up their hands when their son is about 13, saying that their offspring's behaviour from then on is all down to the school and peer pressure. That's completely wrong, a feeble excuse for laziness or cowardice. Many dads simply don't want to take the initial hit of lost popularity.

The truth is, during those years when the boy is trying to turn into a man, that's when your influence should be at its greatest, that's your time to shine. And an awful lot of men blow it.

And then their sons can turn into the sort of adolescents who are a complete bloody pain for everybody around them, not only parents but siblings, teachers, neighbours, everyone.

None of this should be controversial, and in much of the country, it isn't. But in some circles,those I mentioned, the notion of a father with authority is thought of as synonymous with an authoritarian father, and thus easily ridiculed as a return to Victorian values, or an attempt to wind the clock back to the 1950s. I don't want to wind the clock back to the 1950s, still less the 1850s. It's easy to posit the one model of paternalism -- an absurdly old- fashioned authoritarianism -- in order to serve as an excuse for the anything-goes ultra-liberalism adopted by many. The reality is the ultra-liberalism is often a convenient ideological cloak for
not being bothered to do the right thing.
---

Thanks to Victoria for sending this to me.

In my experience, boys need fathers who can set limits for them (as do girls who, for whatever reason, seem hardwired to resist a mother's attempts at curtailing their behavior unless it is backed up by a father) and this cannot be done by a 'friend'. A strong father is essential to the health of a family and, it seems to me, we need look no further than the emasculating of males to understand why Western families are experiencing so many difficulties.

Strong men, with the support of sympathetic women, need to start standing up for themselves against the feminist onslaught on our culture. How can young boys admire males who cravenly submit to whatever the current system demands of them even when it is not in the best interests of the members of their own sex?

If older men don't accept their responsibilities to defend males, who will? Some of us women who have come out the other end of feminist propaganda would be willing but our fighting for what is in the best interests of men would be taken as confirmation that males are powerless eunuchs who need women to defend them - not the kind of message we wish to convey.

In my 60+ years, I have learned that every time we submit to an order coming from an unwise authority that goes against what we feel in our hearts, we lose a little piece of our souls until, in the end, we are nothing but empty shells. This is true for women, as well, of course, but even more dispiriting in men who are raised with the notion of knowing their own minds and being strong and independent in order to be 'real' men.

Because doing so is so difficult in our overly-controlled, hierarchical world, the bullies satisfy their thwarted desire for freedom by lording it over any male lower in the pecking order than themselves and the cowards, by dominating and blaming women for their lowly status in life.

What we really need is a spiritual revolution where we recognize that NO ONE has authority over us other than God and where we are willing to stand firm on the point to death, if necessary, in order to prove it. To my mind, the first place to start would be in getting rid of 'compulsory' schooling for that is where children, newly arrived from the world of spirit and ready to give their gifts to the world are forced by society (enforced by parents; definition of 'enforce' is 'to compel obedience' - a nice lesson to teach our children in their most formative years) to sit in a class room for a minimum of 14 years, being force fed information, much of which will never have any relevance in their lives.

It does, however, fit in nicely with the 'elite's' objective of making them feel powerless to change anything and resistant to any further learning of any sort and foment in them a desire to escape from life by plugging into I-Pods and drinking themselves silly, if not worse.