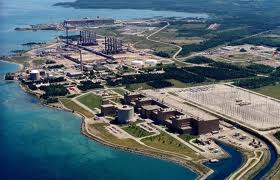 (Bruce Power, on the shores of Lake Huron)

The 'code of conduct' defines a 'perceived threat of violence' as 'violence' and looking at a woman for more than three seconds is sexual harassment.

When Bruce Power reaches full capacity early next year, the plant will supply 25% of Ontario's energy needs and will be the second largest producer of nuclear power in the world.   The plant is 1/3 owned each by a Canadian uranium miner, a Canadian pipeline company, and the Ontario civil servants retirement fund.

The drive through Bruce County is breathtaking, especially in winter.  Populated by tourists in the warmer months, the winters are cruel.  On the shores of Lake Huron, the snow doesn't fall straight down; it goes sideways.  The roads can be impassable.  When the only thing you can see is your windshield, you wonder why you even left home.

Eventually, the plows, the trucks, and the mammoth snow blowers carve a path, freeing the employees who had been snowed in.

The first thing that stood out as I headed into the plant for the first time was that the entrance is off of "Bruce Rd. 33."  'Funny,' I thought, as according to the rumor mill, you'd be hard pressed not to find a Mason in the upper echelons.

Left,  Their logo is the sun rising in Aquarius.
The slogan is 'Power for a New Generation'  (or a New Age?).

I was headed in for what is commonly referred to as 'indoc'; my indoctrination.  This is the initiation into the mysteries of nuclear safety regulation and procedure, the code of conduct, their language of acronyms, basic radiation education, plant security, etc.  Anyone who is hired must endure days of 'death by power point presentations' covering all of the aforementioned areas, and then some.

Certainly, potential NEWs (nuclear energy worker) need to have a basic knowledge of radiation safety, though most of the training is about towing the line, right down to how to speak when carrying out work.  There are no accidents, only 'Human Performance Related Events.'  Working alone is not allowed. At least two people will carry out a work task.

Thinking for yourself is thoroughly discouraged.  While fostering a cool attitude towards exposing your body to radiation, they instil fear with 'Operating Experience' or 'OPEX', facts highlighting errors and near catastrophes worldwide.

It is emphasized that 'Human Performance Related Events' are common.  Even if it is mechanical failure, often it will be attributed to an oversight by some asshole who thought he was smart enough to do something himself. Just to add to the confusion, the person responsible may be given a promotion.

It is easy to see the pyramid structure in the chain of command. Levels include safety responsibilities and accountability,  maintenance and work orders approvals, the myriad rules and rigid structure, hypnotic and confusing, all working their psychological effects as they trickle down to the base levels -- the workers and their families.  A key rule: never, ever do anything unless you are told to do so.

The  'indoc' is mandatory prior to entering the 'Protected Area'.

The 'Protected Area' are the plants themselves, and surrounding space.  Two large fences run along the perimeter. The razor and barbed wire on the outer fence is angled outward. On the inner fence, it is angled in.   At the main entrance your vehicle is subject to a thorough search as you show government ID to obtain a temporary site pass (Since 9/11, school field trips have not been permitted.) 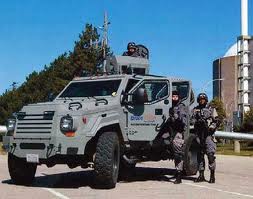 Security is mind blowing. Heavily armed guards are a common sight, hand guns, big machine guns, all fully loaded.  Some drive around in armored vehicles (complete with gun turrets), others make their rounds on foot.  This security team has taken first-place in the 'Security Protection Officer Team Competition' for the last six years in a row.

After several day of training, you are issued your RFID.

The RFID is in the employee badge. Also on the badge is your full name, photo, and two numbers.  The badge is commonly referred to as your 'prox card'.

Prior to unlocking the turnstile with the RFID badge, everyone is searched for explosives, unapproved electronics devices, metal and other contraband.  Once through the security complex, another badge awaits, the TLD badge.

The TLD, or Thermoluminescent Dosimeter, is more important than the prox card in that an employee's failure to wear one could potentially result in the revocation of a plant's operating license.  A 'dosimeter' records your 'dose'- your cumulative total of radiation exposure (at work.)

The TLD badge contains a crystal which is analyzed in a lab.  The amount of radiation to which the crystal is exposed will affect the light it emits as it is heated.  The resultant data is translated and recorded in a national registry.  The CNSC regulates the maximum dose a worker may receive over one year, five years and a lifetime.

For example, over the course of one year, an employee will usually be exposed to one-fifth the limit.  That being said, the Japanese recently upped their limit is twice the Bruce Power limit.  It is four times higher than limits for the Canadian public.

For personnel identification purposes, the TLD has a barcode.  It is linked to the worker's name and dose registry number.  It is required for passage through the various 'checkpoints' found throughout the plant.

This process is crucial in keeping the radiation where it is supposed to be, and catching it if it escapes.  It is virtually impossible for a worker to bring home anything radioactive.

At the same time, it is reminiscent of military check points.  Workers line up at the monitor/entry/exit points, slowly stepping forward as the line shortens, bar codes ready to go.  Even in the absence of security personnel, some people are so afraid of screwing up and being fired or disciplined, they will report themselves and others for perceived infractions, such as almost forgetting to put a notebook in the materials monitor, or not wearing a TLD badge in the lunchroom, where it is not required.  Two workers bumped heads walking around a corner.  The incident was reported. 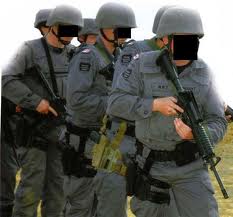 Cameras are everywhere.  Inside, outside, nothing will escape them.  When certain critical tasks are carried out, there is audio surveillance as well.  Workers are taught and expected to speak and repeat instructions only in a certain way to ensure understanding, very slowly and several times (as though everyone was brain dead).  The 'code of conduct' defines a 'perceived threat of violence' as 'violence' and looking at a woman for more than three seconds is sexual harassment.  God forbid you should be overheard telling someone how you really feel about the 'Pride' parade.  Check points, RFID, and a heavily armed, highly skilled security force. The barbed and razor wire are angled inward.  Of course, it is all in the name of safety and protection...


The company that oversaw the refurbishment of the two reactors was AECL.  As the major portion of their work was upon conclusion, AECL was sold to SNC Lavalin, for $15 million dollars.  Skype is basically free for users on the internet and it sold for $8.5 billion.  AECL was a crown corporation, designed and operated the Chalk River facility (R&D, medical isotopes) and the CANDU reactor itself. This is the type of reactor in the Canadian plants and many others across the globe.

The deal was brokered by N.M. Rothschild & Sons bank in New York.  In November 2010,  a few months prior to the sale, AECL received a new business plan/ model.  This document had been contracted to and produced by, you guessed it, N.M. Rothschild & Sons.  A large portion of the work force was laid off, and an updated code of conduct was introduced.  The only thing made public about the Rothschild/AECL document was that AECL had received it.

A reward was given on the Restart project if a worker or someone in management made a significant improvement to the project along the lines of tooling improvements or suggestions about planning and carrying out work activities, among other things.  It was called the 'Restart Challenge' coin.  The image it bore was that of a Phoenix.  In the myths, the phoenix bursts into flames and dies in the fire. It then is reborn from the pile of its own ashes. The phoenix on the coin is sitting in flames.