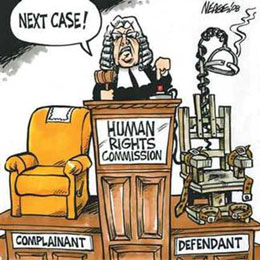 "Human rights" have become dirty words in Canada because Zionists determine who will have them. Welcome to the future.

The Human Rights Commission, which bills itself as a "quasi judicial" body, is lobbied intensely by the B'nai B'rith, the Canadian Jewish Congress and four other Zionist organizations. (The CJC has a four-man office in Ottawa.These schmoozers have reported countless meetings with CHRC since 1996.)

The CHRC then forwards the Zionists' complaints to the "Tribunal" which prides itself for being an impartial court. But the Tribunal has never refused to hear a case, NO MATTER HOW BASELESS. Nor has any complaint been settled in favor of the defendant.

"A court where the rulings go only one way is the very definition of a show trial," writes The Ottawa Citizen. "These institutions should be the source of shame to Canadians."  (Dec.9 2007)

This website is the subject of a Tribunal. The CJC goal is to silence my criticism of Zionism  and the New World Order. The pretext is that I foment hatred against Jews. But this website does not criticize Jews, only organized Jewry i.e. Zionism and their sponsors, Illuminati bankers. It also alerts Jews to a possible hidden agenda in Judaism that puts them in jeopardy.

That I, the son of holocaust survivors, would foment hatred against myself, my family and other Jews is nonsensical. But, in our increasingly Orwellian world, I stand accused of this absurdity. This is their lame pretext for crude political censorship and persecution.

The Canadian Jewish Congress confirms by its actions that it is part of a conspiracy to distort reality.

For example, it wants to remove an article entitled: "Soviet Agents Designed IMF, World Bank UN."    Why? The Illuminati conspiracy is also behind Communism.

Many Jews are waking up to the fact that the CJC is an Illuminati (i.e. Satanist)  lobby. In 2000, the CJC demanded the removal of the Lord's Prayer from public schools, town councils and legislatures.

"Why is a perfunctory recitation of a generic prayer a threat [to them]?" Ezra Levant, a Jewish lawyer asked. "Why is the Christian Canada that was attractive to Jewish immigrants in the 1900's so unattractive today?...Jews have succeeded in Canada not despite its Christian traditions but because of them."

Similarly, the CJC champions other Illuminati causes like global warming and homosexual privilege. Why did the CJC go to court for a gay teacher who was fired from a private Christian college for not living up to its moral code? Levant asks.

"That suit had nothing to do with promoting Judaism -- which forbids homosexual acts -- or protecting the interests of Jewish schools, which would have fired such a teacher too. But it had everything to do with driving religion out of Canadian law."

The CJC constantly conflicts with Canadian Jews. Professor David Noble of York University is suing the CJC for $25 million for defamation after he exposed their subversion of York University. "They think they have bought themselves a university. They haven't."

But when Noble campaigned to keep his university open on Jewish holidays, the usually obstreperous CJC accepted without demur. Diversity trumps Judaism apparently.

A Canadian Jewish group concerned with justice for Palestinians was denied affiliation with the CJC. It questioned "the CJC's right to speak for the Jewish community if it excludes legitimate points of view shared by many Jews in Canada."


THE BIZARRO WORLD OF THE CHRC TRIBUNAL

"Abandon all hope all ye who enter here." The watchword for Dante's Inferno also  applies to the innocent "hater" entering the Tribunal process. Here are just some of the "Hallmarks of a Hate message" the Tribunal applies to him:

1. In determining if someone is fomenting hate or contempt against a targeted group, his intent is not a factor.  In other words, his words can be taken out of context.  And, the Tribunal will decide what effect they have had.

2. The targeted group is described as a "powerful menace" taking control of the major institutions of society and depriving others of their freedom of speech etc. ( As in, "Tribunals?")

4. The target group is portrayed as preying on children. (800,000 disappear every year.)

5. The target group is blamed for the problems of the world. (No, these problems happen randomly.)

6. The target group is violent by nature, innately evil, and without redeeming characteristics. (They like children. Does that count?)

7, The messages make light of past persecution of the target group. (Let's hear it about it one more time.)

8.  The messages make reference to a "world conspiracy."  (Ever heard of Communism? Guess Richard Nixon and J. Edgar Hoover were "haters.")

The issue in my case is who is the target group? Not Jews in general, but Masonic bankers and their allies, not all Jews: Rothschild, Warburg, Rockefeller, Schiff, Baring, Lazard, Erlanger, Warburg, Schroder, Selingman, the Speyers, Forbes, Pinchot, Carnegie, Dupont, Russell, Kerr, Collins, Cecil, Bush, Mirabaud, Malet, Kuhn & Loeb.  The Canadian Jewish Congress indirectly answers to these families.

These "hallmarks" were written by lawyers not historians. They obviously looked at an "anti Semitic" web site and reverse engineered their criteria. Now they force all critics into this hatemonger mold.

The Canadian Jewish Congress does not represent Canadian Jews. It is a registered Zionist lobby tasked with keeping Jews in line and promoting the Illuminati agenda.

The Canadian Human Rights Commission and Tribunals are products of the Zionist lobby and Illuminati finance. They don't represent the Canadian people. They are an existential threat to our freedom.

As children we all wanted to silence our critics, especially when we were wrong. We wanted them declared insane. But when we grew up we learned that free speech and debate were the best guarantee of discovering the truth.

The Zionists at the CJC never grew up and now provide a living example of authoritarianism. They hate the truth.  Think USSR, Nazi Germany, Communist China.

Let's hope their lackeys at the CHRC will realize they are betraying their countrymen. Just because they don't yet know about the Illuminati conspiracy doesn't mean there isn't one.

Henry--What can one say? Having these HRTs in place is a major indicator that our governments of all levels and all stripes are indeed 'Orwellian' as you mention. I have always believed Eric Blair was a prophet sent to warn us. I listened and watched and have seen this coming for many years.

What I don't understand about the Jewish people is why they let themselves be used in this manner and for so long. The Zionists(Illuminati) are destroying them even worse than they are us. The Illuminati in the form of the BB and the CJC howl 'anti-semitism' when it is nothing of the sort. It is anti manipulation and anti control of our every effort to live in a free and democratic country. But then, in our controlled country truth is not a defence?

I doubt if the lackeys at the CHRT even consider their countrymen. They serve their Masters willingly. There always has to be sell-outs to the Controllers and the Controllers chose wisely. That we vote in governments that support this evil is another matter. They ARE selling out our countryknowingly and willingly. They take orders and obey. The George Galloway refusal of admission to Canada was a great example. Ordered by a Zionist American named terrorist group(JDL) to keep Galloway out, our government did just that. Harper has stated that he stands with Israel, but has he ever stated that he stands with Canada? I have never heard that.

As a longtime reader of both your books and columns, I would like to tell the CHRC that there is nothing 'hateful' or 'anti-semitic' about your work.

People are foolish to think that the threat of Communism died with the fall of the Berlin Wall and the 'collapse' of the Soviet Union. It is more insidious now than it ever has been because it's been repackaged, with the help of Madison Avenue, as benign and progressive 'Globalism'. Anyone who objects to this agenda is labeled a 'hater' whether they are Jewish or not.

The CHRC and the manner in which it conducts its 'inquests' is textbook Soviet-style justice, circa 1920 Russia. It was Trotsky and Lenin who introduced the concept of 'racism' into our lives as the lethal bludgeon of political correctness and totalitarian mind control. The word of 'racism' didn't even exist in the common lexicon prior to their forcing down our throats along with their hateful, godless agenda.

They labeled anyone who objected to their murderous Utopian vision as being 'racist' or 'anti-semitic,' which for them were interchangeable terms. Anyone, like Alexander Solzhenitzyn, who dared notice that 70% of the thugs who were running the revolution happened to be Jewish, were thrown in jail or murdered without a trial.

Canadians and Americans are naive to think that this twisted mentality and agenda is not still alive and well--and has us all in its cross hairs, Jews and Gentiles alike. Henry, I believe that your greatest offense to the CHRC agenda has been that you dared warn Jews that this 'conspiracy' is putting them at grave risk too, and if they, like you, start speaking out, the whole plan will collapse and fail.

There is no question the CHRC is held hostage by Zionists â€” I suspect the provincial counterparts are as well, although I can only speak with authority about Ontarioâ€™s. Government in Ontario has tinkered here and there with the OHRCâ€™s mandate and process, but it has not â€” nor does it have the guts to â€” confronted the real issue: special interest lobbies that hijack the commission (not limited to Zionists, but they are the best organized and most forceful). Most of what they address has nothing to do with â€˜human rightsâ€™, or some targeted discrimination â€” it is all about soothing someoneâ€™s hurt feelings. As if the Zionists have any right to complain about discrimination!

My work occasionally takes me before the OHRC representing the interests of employers who have been tagged with work-related complaints (many times, quite legitimately). Regardless of the issue, there is usually certainty that the decision isnâ€™t going to make much sense.

Zionism is no more Jewish than the Pharisees, Talmudists, Kabbalists, Templars, Hospitallers, Manichaeans etc. Galatians 4 says spiritual Jerusalem is above while physical Jerusalem is "Spiritually, Sodom and Egypt" (Rev 11:8); the latter leading to bondage. Read Obadiah, the judges of Zionism are Edomite, not Jewish.

In Gen 27:40 Esau is prophesied to achieve Dominion and throw the yoke of Jacob off. His intent is to slay Jacob ie real Jews and true Christians. As Albert Pike said, WW3 will indeed be the biggest war in human history and as HG Wells said, it will begin in Basra. Red Shield, Red Cross and Red Crescent meeting on the battlefield of the Red Sun as Confederates of the Red Son. As Solomon said, "There is no new thing under the Sun". By the way, the Red Shield came from Phoenicia, not King David. Theresnothingnew.org/