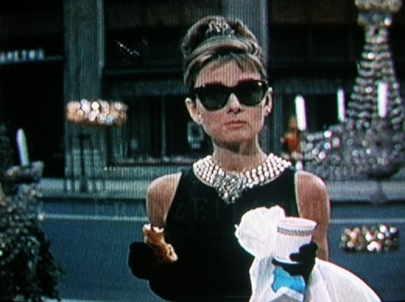 With a danish and coffee in hand, Holly
taught modern women to chase a chimera
and eat on the run.


Dog's Breakfast - "a mess, a muddle, a hodgepodge - something badly done."


"Heterosexuals are portrayed as prostitutes who must get used to selling their souls in order to survive. "

In retrospect, the movie "classic" "Breakfast at Tiffany's" (1961) was a major salvo in the Illuminati's war on heterosexual society. We can now clearly see their goal is not "gay rights" or "equality" but making homosexuality the societal norm.

While passed off as a "romance," this movie was poison to heterosexuals. It set the 1960's template where women were allowed to lose their minds and men were forced to rescue them. From that point on, it was all about their needs. 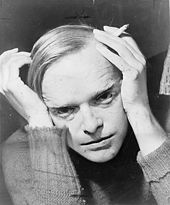 The movie was written by Truman Capote, left, a product of a broken family who became a homosexual. Like Tennessee Williams, he was championed by our Illuminati Jewish cultural controllers. His crippled, perverted vision was held up to the goyim as the last word in sophistication.

In the movie, the heterosexual Adam and Eve are portrayed in homosexual terms. Essentially they have to navigate a gay obstacle course in order to find heterosexual love and marriage, just as we do today.  For 1961, this movie is sick, sick, sick. Let me count the ways:

1. Holly Golightly, played by Audrey Hepburn, is a prostitute. Her appeal is strictly based on "beauty" and occasional repartee. The prostitute part is glossed over and she is portrayed as a "party girl." She is looking for some nebulous security represented by the store Tiffany's.  She spends her time trolling for a rich husband. Are we supposed to believe this woman is attractive?

2. Her suitor, Paul Varjak, played by George Peppard, is a writer. He is also a prostitute, supported by a rich older woman played by Patricia Neal as though she were still acting in The Fountainhead.

In other words, heterosexuals are prostitutes who must get used to selling their souls in order to survive.  Holly and Paul both agree they would marry each other for money in a minute, if they had any. "I need money and I'll do whatever it takes to get it," Holly vows. 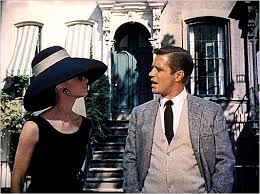 3. Everything Holly does is designed to emasculate Paul. She wants him as a "friend" only. Sleeps in his arms. Whistles down a cab when he can't. Throws his "arrangement" in his face. She gives mixed signals and blows hot and cold. This became the typical neurotic behavior of modern women.

4. There is a sick subplot where we learn Holly is really from Texas and was married at age 14 to "Doc," a vet played by Buddy Ebsen, a man easily 40. She claims the marriage was "annulled" but obviously they had sex.

5. In order to make this crap palatable to heterosexuals, Holly and Paul must overcome their moral lapses and find their way to each other. But Holly is a royal pain-in-the-ass to the end.  Even after Paul dumps his gigolo gig, finds a job and declares his love, Holly is set on going to Brazil with a rich heir. When he dumps her, she is still intent on leaving to hunt "the 50 richest men in South America." She tells Paul that  she doesn't want "to belong to anyone" or to be "put in a cage."

"I don't know who I am," she says. She is a mental case, modeled after Capote's mother who pursued "adolescent values."  (see Dan's Comment below.)

7. This is the homosexual-feminist message of the movie. Get used to being the Illuminati's whore. Forget about marriage and family. Women "don't know who they are" and must "find themselves." This is the way the novel ends. But in order to sell the movie to unsuspecting goyim, they tack on a romantic finale. We have 110 minutes of homosexual dysfunction; five minutes of heterosexual romance. Paul tells her she is afraid of reality and walks away. She chases after him. Passionate kisses in the rain....  Not one minute of real life. 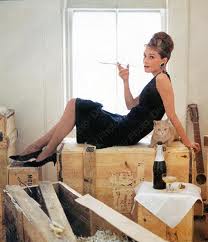 Breakfast at Tiffany's is another reminder that Hollywood, and popular cult-ure in general, are devoted to Illuminati (satanist) social engineering. They have been subverting western Christian culture from the get-go; and the promotion of homosexuality, which is so obviously socially destructive, is a big part of it.

The reason my generation had to "search for our identity" is because our primary identity as men and women (protectors and providers, wives and mothers) was constantly being attacked and eroded by the Illuminati. [The institution of marriage was designed  to provide for women and children, so society can successfully procreate. Most gays want neither marriage nor children. Thus marriage is a distinctly heterosexual institution; it is being redefined as gay in order to destroy it. ]

In 2012, Breakfast at Tiffany's  was deemed "culturally, historically, or aesthetically significant" by the United States Library of Congress and selected for preservation in the National Film Registry.  Considered "iconic", it set an example for the 1960's generation. Women wanted to be Holly Golightly just as a generation later they wanted to be Carrie Bradshaw. (Sex in the City was also written by a homosexual.)

Yes Virginia, we are satanically possessed.
---

First Comment from Dan: The iconography of a sick society. This is what influenced 60's women.

Many misguided women still want to be "Holly Golightly."  She was based on Capote's own mother - Lillie Mae Faulk -an emotionally arrested nymphomaniac who spent a lot of time with men in hotels in New York City while Truman was a boy.  Missing from "Breakfast at Tiffany's" was mention of a five-year-old son locked up in his mom's hotel room while she was out with men.  Capote's real surname was Persons.  His real father's was Archie.  His mother gave him the Capote name through another marriage when Truman was eight.

Capote was the product of New Orleans lust between a teenage girl and a traveling salesman. Souring quickly on the marriage, she forced Truman's father to file divorce by having sex with other men.  When Truman was four, she moved to New York in search of wealthy men to support her fantasy of being a Southern Belle.  In reality she was merely a physically beautiful orphan from an average background.  Literary historian Andreas Brown wrote of her, "...a case of arrested development in the sense that she pursued adolescent values well into her thirties. She married the first fellow who came along who had any money."

Growing up in hotels with a loose woman as a role model of women, exposing him to a revolving door of amoral strangers is a well-known classic environmental cause of homosexuality.  She told Truman her job was "hostessing".  Though Capote never revealed that Holly was based on his mother, he said of Holly that she "was not precisely a call girl. She had no job, but accompanied expense-account men to the best restaurants and night clubs, with the understanding that her escort was obligated to give her some sort of gift, perhaps jewelry or a check ... if she felt like it, she might take her escort home for the night."   Whatever the job description, she was very successful at it.  She became a socialite in Manhattan for her reputation with hostessing parties for the elite.
(This is Illuminati stuff - the right guests are quietly invited to the 'real' party in other rooms. These may have involved 'call boys' for homosexual politicians.  Capote knew a lot more about the 'secret society' of Manhattan elite than he wrote about.).

Capote never mentioned whether he was molested by any of his mother's men, though he was so effeminate by the time he reached puberty that his mother sent him off to a military school.   Meanwhile she changed her name to 'Nina'.

Capote's career as a writer succeeded early.  When he got the phone call to tell him Nina had committed suicide a few weeks before her 49th birthday with a bottle of Seconal, he said, "She didn't have to die.  I have money."

Comments for "Dog's Breakfast at Tiffany's "

Yup, you're right. Breakfast at Tiffany's is a terrible movie; I found it to be a major downer.

Most of the movies after the 1960s went down the tubes morally and I don't think are worth watching.

Rather than wasting time watching movies, I think it's better to lift your soul by praying the rosary every day.

I would absolutely agree with this article: much of Hollywood and the media has been used to program the masses into thinking that homosexual behavior and "orientation" is "normal" and even desirable.

Capote, Gore Vidal, Tennessee Williams, and countless other writers and actors and directors have been complicit in this agenda to turn society into a bunch of degenerate, immoral, amoral mindless slaves. To say it is pathetic is an understatement.

Henry, not all of them were this way. Leonard Katzman produced Gunsmoke which was clean and had a moral message. Loren Green and Michael Landon of Bonanza played clean roles and that show also had a moral messages. Robert Conrad was very well casted in the Wild Wild West as a masculine and moral man. David Jansen of the Fugitive was very well portrayed as a righteous man along with Robert Stack of the Untouchables. I could go on and on here but my question is when and how did this all change? Did what was clean and moral kind of just run it's course?