Israel Has Morally Compromised its Supporters 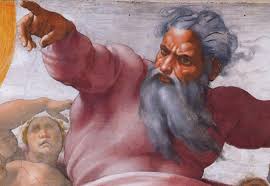 
Israel and the West are complicit in
mass murder in Gaza. Should they
suffer the same fate as Gazans,
they won't have any moral recourse.

As friction with Russia threatens to escalate, this isn't a good time for Zionists to embrace the principle of collective punishment and to relinquish their moral authority.

Yet this is exactly what has happened to those who have endorsed Israel's abominable and disproportionate assault on Gaza which has killed 1900 people, 70% of whom were civilians, including 415 children.

Why have Israel's actions been so egregious, given the lack of genuine provocation?

More than 10,000 Gazans have been injured.  373,000 children require psychological support. 500,000 Palestinians have been displaced with 187,000 still living in U.N. emergency shelters. An estimated 10,000 homes have been completely destroyed, and 30,000 homes partially destroyed.

On the Israeli side, 64 soldiers were killed assaulting Gaza, and three civilians in Israel. This may be because the Hamas rockets are glorified firecrackers- they don't carry a payload of explosives.

Zionists and their lackeys can spin their atrocities as "self defense" but every aggressor in history has used this formula. They may even convince the majority.  But might does not make right. Neither does media control. There is a moral order and a difference between right and wrong. Somewhere inside, even the Zionists know it, which may explain their outrageous claims.

Prime Minister Netanyahu said Thursday it would have been "a moral mistake' not to destroy UN schools where civilians were sheltering because "Hamas could have launched terrorist attacks from there."

"There seems to be some kind of chutzpah contest underway. This entry is going to be hard to beat," a friend remarked.

Is there a spiritual agenda at play? By embracing the Israelis and their ridiculous excuses, we compromise ourselves and become accomplices in our own destruction.

In a 2012 article entitled, Why Do the Illuminati Expose the Conspiracy?  I write: "The Illuminati don't just want your children, your spouse, your property, and your freedom. Your birthright isn't sufficient for these Satanists. They want the ultimate prize. They want your soul. ...They are deliberately clumsy because they want our complicity. They don't want us to say, "Gee, we didn't know." They have a wager with God. They want to win us over to Lucifer and become demons like them. But they have to give us free will, the ability to make a choice."

Israelis and their supporters have been seduced and no longer have moral legitimacy. They have been further inducted into the satanic cult, the Illuminati (Cabalist Judaism) which controls the planet. Humanity is to become the worst kind of Jews. 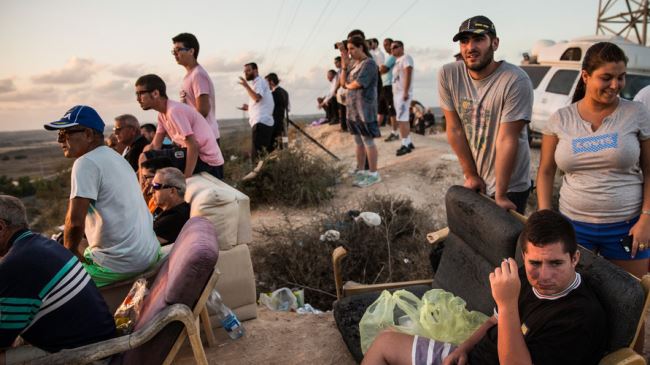 Israeli Jews themselves head the list of the damned. 95% support the actions of their government.  (This number probably also applies to Jews worldwide.)

Israeli soldiers cheer the destruction of Palestinian homes while civilians, left, gather on hilltops to enjoy the spectacle.

But Americans are not far behind. The bombs falling on Gaza come from an American stockpile. American bombs are murdering Palestinian civilians! Meanwhile American taxpayers are replenishing the Iron Dome to the tune of $225 million.

Then there are Zionist shills like Canada's Stephen Harper who commits Canadians to Israel's cause without a peep from the so-called "Opposition."

As did David Cameron in Great Britain.  Tony Abbott of Australia also supports Israel's "right to self defense."

Thanks for adding these people to the list of morally compromised without any consultation!

Many believe that the Illuminati plan a third world war to cull the human race to about 500 million. If this is true, best to reduce humanity to the level of dumb animals, with no moral stature or value. They have done in Gaza.

Whether people recognize it or not, there is a moral order. Those who flout it do suffer negative consequences.

How our minds have been warped. This is satanic possession.

The West is ignoring the practitioners of 'disproportionate' violence

It's Hamas and Isis who are willingly sacrificing the lives of men, women and children - not Israel

In response to a recent article, Marcos describes the spiritual agenda in Gaza in different terms:

The Illuminati strategy in the Middle East makes little sense unless we understand some of their esoteric beliefs. Talmud Jews expect the arrival of Messiah Ben-Yosef, a military leader who will crush Israel's enemies and enable the world empire of Messiah Ben-David. The occultist Illuminati share a similar belief in a global leader (Christians call him the antichrist) who will rule from Jerusalem.

For these extraordinary events to happen, a traumatizing war must occur first. It should be much easier to promote this total war if all Israel's neighbors are crazy fanatics prone to violence, and not moderates such as Mubarak. Let the tension grow and nuke them all in retaliation for some false flag or real attack on Tel-Aviv with a dirty bomb or biological weapon launched from Syria or Iraq.

This view would explain why Israel is unnecessarily cruel in his actions against Gaza and Lebanon, targeting civilians with no objective military advantage. The more the Arabs hate Israel, the higher the tension and the closer the total war.

"Is there a spiritual agenda at play? By embracing the Israelis and their ridiculous excuses, we compromise ourselves and become accomplices in our own destruction."

That is exactly and precisely it right there. I have sent a letter to Stephen Harper, in my letter I clearly object to the dope dealing, the pedophelia and the satanic rituals. I have openly talked about my objection to these things while standing in front of the "Powers That Be". They heard me loud and clear.  I have told them that they no longer "represent" me. I know what the word "represent" means. It means I have given up my free will and a part of my life to further the Luciferian agenda. I have not done this. It is no longer a point for me to write to Stephen Harper.

I wish to conduct my life according to law rather than Legalist philosophy. I am not a debtor to the Crown.

"In law, acquiescence occurs when a person knowingly stands by without raising any objection to the infringement of their rights, while someone else unknowingly and without malice aforethought makes a claim on their rights. Consequently, the person whose rights are infringed loses the ability to make a claim against the infringer, or succeed in an injunction suit due to the infringer's conduct. The term is most generally a kind of "permission" given by silence or passiveness."

Nice essay on Israel's moral bankruptcy. In the eyes of intellectuals everywhere, Israel has blown their last get-out-of-jail-free-card, but I see another important moral dynamic at work here.

We need to stop to consider what's wrong with Israel and the 70 Million Jews of the world, a/k/a THE JEWISH PROBLEM. In a nutshell, I propose it is cult programming.

If you want to create a cult, you first tell the cult members that they are the master race or god's chosen people (or any variation of supremacist horse-shit) and that they are surrounded by lesser humanity WHO HATES THEM FOR WHO THEY ARE. Voila...you have Nazis, Zionists, Brahmins, etc. For sake of argument, I admit there are people who irrationally despise Germans, Jews and the upper castes in all societies, but that's a specie of jealously motivated by envy. That is not the venomous xenophobia taught and practiced by Nazis against Jews in the 1920s, 30s & 40s. What the Zionist today practice against Palestinians is the SAME venomous xenophobia taught by Nazis against Jews. And it's so ironic that modern Israelis should become so cold blooded, Nazi-like and genocidal in their methodical liquidation of all remaining Palestinians.

We must ask ourselves whether there is that sort of homicidal hatred against Jews in America or any place in the world? I seriously doubt it.

Half my friends are Jews of all varieties. Most of my Jewish high school friends married gentiles and their children are hardly Jewish at all, so in Texas the whole Jewish shtick is fading fast. It should be extinct in another 50 years--if it takes that long. For me personally, IN ALL MY 70 YEARS, I HAVE NEVER WITNESSED ANY ANTI-JEWISH ENMITY. NEVER! But my Texas Jewish friends BELIEVE ANTI-SEMITISM EXISTS. They give silly examples, but they must believe it. As I mentioned above, they need to believe they are irrationally hatred IN ORDER TO MAINTAIN THEIR JEWISH IDENTITY. To hold together, you must not only be THE MASTER RACE--YOU MUST BE HATED FOR WHO YOU ARE. Without that phony racial apprehension which they call ANTI-SEMITISM, they would lose the psychological cult glue that holds their sick culture together.

National government 'leaders' are actually pathetic puppets of a superior occult power was graphically demonstrated when Canadian Prime Minister Stephen Harper and Australian Prime Minister John Howard delivered identical speeches on Iraq in 2003:
https://www.youtube.com/watch?v=qtd7o9x5uN0
If you're going to be in the club, then you have to pay your dues.

Comments for "Israel Has Morally Compromised its Supporters"

The truth of your article is "chilling". (Revelation 3:7-13......him that overcomes I will write upon him the name of my God, and the name of the city of my God, which is NEW JERUSLAEM which cometh down out of heaven from my God, and I will write upon him my new name." Those that overcome the synagogue of satan Jews are part of the New Jerusalem. Galatians 4:21-31.)---- Thanks for all the great articles you post on your web site. I have been confronting "Christian Zionism" for a number of years now because of my Evangelical background. The whole topic horrifies me. The church has become one and the same with satan and the Synagogue of Satan Jews, and blood is on their hands. Revelation 18:24.)

Yes, America and Western Europe have become complicit with Modern Talmudic Ideology. If murder is a moral obligation than it is NOT of GOD. It is NOT a moral obligation to GOD to murder what he has created in his own image. This is the Satnic/Draconian agenda to exterminate the planet of what GOD has created in his image and replace it with a hybrid race of their own who worships and answers to Satan. The FALLEN ANGELS tried this once before by having relations with the daughters of mankind that produced GIANTS as their offspring that were later destroyed. However, this time Satan wants your soul first if he can get it because without the willing complicity of mankind his plan again will be thwarted.

Marcos is right on the money. IsraHell's over the top murder and mayhem in Gaza is intended to spark a wider conflagration in an already militant and radicalized Middle East, on the way to going global, out of which ashes will arise a Jerusalem-centered, Anti Christ-headed Satanic despotism.

But in addition to that, the leveling of Gaza, dutifully reported on by the Zionist-controlled media, is also signing the death warrant for a good chunk of Israel and two thirds of the Jewish people, as seen by the sharp rise in attacks against Jews world-wide.

Ordinary Jews again are being set up to take the fall for and divert attention away from their misleaders and their Satanic Cabalist N.W.O. project. We need to be careful lest in our zeal for justice, the real culprits lurking in the shadows don't get off scot-free.