The Third Temple and Plans for "Greater Israel" 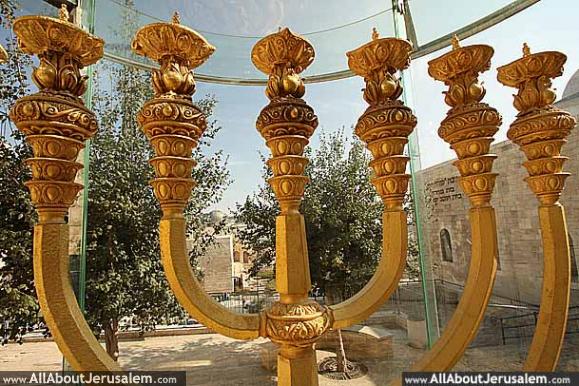 Left, A large full-sized Menorah candelabra, designed to burn olive oil - weighing half a tonne, covered in 92 Lbs of pure gold, and worth $2 million sits in a glass case overlooking the Western Wall. It awaits placement in the Third Temple to be built on
the site of the Dome of the Rock.


After a recent visit to the Temple Institute in Jerusalem,
Steve Thomas wonders if Jewish prophesies of world government aren't already being realized.


Earlier this month I visited the TEMPLE INSTITUTE, in the Old City of Jerusalem, in the Jewish Quarter.

We were given a guided tour and shown priestly robes for the 'kohanim' (priests) and a collection of replica temple vessels that have been recreated in preparation for a newly rebuilt Jerusalem Temple. They have collected a considerable amount of gold to fund the operation. They said they expect God to divinely remove the Dome of the Rock by earthquake or war in order to clear the ground.

The following implements (or images of them) were on display, made from the correct wood and metal, overlaid with gold in many instances:
a showbread table and  various trumpets, bowls, breastplates and sacrifice offering implements for the replica 'Holy of Holies' and altar.

We were told that a Jewish man, alive today, born of the Davidic lineage, Torah observant, will be presented as the Messiah of Israel and the world. He will be identified by his victorious intervention in war on their behalf, leading Israel to military victory - either by his priestly intervention, or actual involvement - they seemed a little vague on this.

I asked what the general vision was for the nation of Israel under their anticipated Messiah.

I was told that Israel will be awakened to the Messiah by a reappearance, or mystical intervention (?) of Elijah in some form, identifying him as a son of David. Then the nation will come into it's promised inheritance, and rule the nations from Zion. That the Gentile nations will not be obliged to keep full Torah, but obedience to the Seven Noahide Laws would be required of non-Jewish people. Here the Chabad organization proclaim this doctrine. They believe that people of other religions will move to "monotheism"  and be therefore able to accept "Universal Jewish Morality" as an overarching global law. 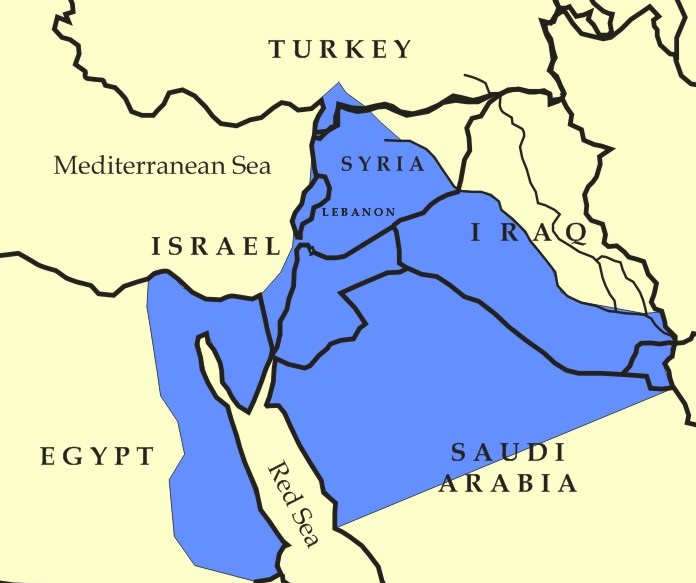 
This morning this came through my FB newsfeed, projectinG the future boundaries of national Jewish Israel


Evidently, the land, presently under the territorial sovereign control of various surrounding nations, would need to be acquired by Israel in the near future to make this possible - namely, significant parts of:  Turkey, Syria, Iraq, Saudi Arabia, Jordan. Lebanon, Egypt, and Palestinian territories. Interestingly, these are the very locations where trouble and strife are presently erupting.


I was personally emailed by a Jewish pioneering researcher recently, who tipped me off about the 'Oded Yinon' plan - he believes this informs present Israeli policy at the highest levels. I have no idea if this is true or not, but read it anyway, to be at least aware of its existence. I was intrigued to read that these very locations mentioned above are being (it is claimed) intentionally divided, to break up the sovereign national contiguity of those countries:


I am beginning to ask whether or not this utopian plan for Israel, being purposefully planned, prayed for, funded, and implemented by Israeli and American orthodox Jewish organizations, based in Old Jerusalem, protected by Israeli soldiers and Knesset-ordained privilege, projecting a global spiritual regime under the auspices of a Jewish Messiah..... Is this the preparation for the final manifestation of antichrist? For Jesus is surely not the Messiah in view....


Is this Jewish kingdom, intended to be something like what Christian Zionists are projecting as a MILLENNIAL KINGDOM - a kind of thousand year Third Reich or empire, (the First being under David & Solomon in the monarchy, the second following Nehemiah and Zerubbabel, under the Maccabees ending in AD70 - followed by today's cries from Masada, as Israeli troops are sworn in, of NEVER AGAIN!)


This is inevitably a controversial line of questioning. Is Christian Zionism being naively drawn into this projection, by the deception of doctrines of devils - false brethren crept in unawares - what the New Testament refers to as Judaizers (Galatians 2:14) drawing the saints back under the redundant terms of the Old Covenant - building again that which YHWH himself has destroyed?!
---
Related- Noahide Laws are Not as Benign as they Appear
"Under Noahide laws Christianity is classed as idolatry and idolatry is punishable by death." - Milton

Tracking the Illuminati on Facebook
Illuminati Who's Who Linked to Raelians

This article is fascinating for many reasons, not the least of which is its relation to the fulfillment of Noahide Laws, in THIS current era.

Recently Netanyahu quietly met with one of the leaders of the terrorist organization, ISIS. Earlier, he publicly stated that ISIS was Â«good for Israel.Â»

Independent journalist reports connect the dots, following the money and arms trail. ISIS' beefed-up support in new equipment, arms, and ammo, points to the United States. Thus, up until very recently, actions taken by the U. S., against ISIS, have been slow or non-existent. Also well known; that Obama released a prisoner from Gitmo who immediately after became an ISIS top leader.

Additionally, on the other side, ISIS has ignored the plight of Palestinians, which only reinforces claims that it is yet another tool, controlled/coordinated by Israel, and funded/supported by the United States.

Therefore, the true purposes of ISIS can only be to; further divide the Moslem world (while claiming to do the opposite), brutally attack and murder both Moslems and Christians, set off more diasporas, and create the (false) impetus and motivation for further deadly false flags in the West (especially in the U. S.) - all part of the Great Game to establish Greater Israel in the traditional Levant region.

Last, but far from least, is the fulfillment of Noahide Law, by ISIS, via the spilling of much blood by unrelenting, non-stop beheadings - under the guise of Islamic Terrorism... It seems what Israel wants, Israel gets, for now. No matter who controls what, this will not end well, for anyone.

Comments for " The Third Temple and Plans for "Greater Israel""

The basic problem that the Jews have is that they believe their own lies. The Judeo-Christians believe the Jewish lies as well. Regardless of how many times the lies are repeated, they cannot form a lasting foundation and are eventually replaced by the truth which nullifies the lies.

The the â€œthird templeâ€ build is a lie. Analysis of the Old Testament reveals that the third temple is long gone.

The â€œgreater Israelâ€ being what God gave to the Jews is a lie. It was promised to the descendants of Abraham, not just the Jews.

The Jews being the â€œchosen people of Godâ€ is a lie. Israel was the name of all the twelve tribes from Jacob, not just the Jews. When Jesus came, â€œGodâ€™s chosenâ€ no longer applied to anyone. Each individual human on the planet had to make a choice, not God making a choice.

Since Israel is currently a jewish government, that would make their false messiah having to be a messiah for a government, not people. How ridiculous since all governments are thieves by simple logic.

Lots of people are going to die as a result of the lies, but there will never be a â€œgreater Israelâ€ or a Jew/New World Order (J/NWO) ruled by the Jewish international banking cartel. Since the peak of the J/NWO power in 1987, we are witnessing the collapse of the lies and their power which accelerates as time passes. The truth will prevail as it always does.

Hi Henry! This Third Temple agenda is at the core of what is driving the Protocols of Zion agenda.... and vice-versa. The West has been co-opted/subverted/corrupted not only for financial gain but to enable this Talmudist Zionist agenda. Greater Israel implies the subjugation of the rest of humanity. We shall see.

It was a powerful and troubling article to read, a reminder. The Pharisees/Talmudists are some serious and very committed psychopaths. Jesus couldn't get anywhere with them. That should tell people something.

Read the latest article, and yes, Steve is 100% right here - although a bit slow on the uptake!

This Jewish Messiah that the Jews are waiting for, will indeed be the Dajjal - or Antichrist. My very close Iranian friend informed me that during the time of the WACO mass murder, one of the three survivors from the fire, was taken for interrogation.

Apparently, she overheard a conversation about a man who was preparing himself for the role of the Jewish Messiah, and that his name was a certain 'David Mabbus' of Iranian Jewish descent. I cannot verify anything more than this, but to say that the Antichrist, without a doubt, is here and alive, shielded somewhere in the States, calling the shots over in the Middle East.

On an another but relevant note-the map of Greater Israel encompasses a great chunk of Saudi Arabia, including the Holy City of Medinah. This is no surprise, as it has been prophesied that during the End Times, the Dajjal, will indeed take control of this nation, except the Holy cities of Makkah and Medinah. The Jews want Medinah back, as they see it as their Jewish ancestral home, otherwise known as Yathrib.

But the Antichrist will want it, as it is the burial ground of Prophet Muhammed (pbuh). What is quite creepy is the fact that the House of Saud (evidence points to them being crypto-Jews), have built a white palace high up on one of the mountains overlooking Medinah.

To the locals, however, this palace is calmy referred to as 'Dajjals' Palace', as it is believed that it is has been built for the sole purpose to serve the Antichrist, as an observation post, in order to plan the invasion of Madinah. Islamic prophesies state that the Antichrist and his army will be based outside the gates of Madinah but will not be able to enter due to divine protection.

Interestingly, there is a huge US army base just SE of Madinah, that has been positioned there since the first Gulf War. It is believed that they are awaiting their orders to invade Madinah, once the Antichrist appears.

As to whether the Dome of the Rock will be destroyed or not, only God Knows, but if it is removed, then one can safely assume an outbreak of catastrophic warfare.

Message to Steve Thomas: I'll 'tip you off" that all your information is at least twenty years old and has been out there as part of the public record for as long. This is merely the trotskyites/satanists acquiring a religious patina to their activities for cover. The New World Order is merely a public unveiling of the old world order which is already here.

know much of this info has been available for a while (as your commentator Charles rightly says), and plans do unfold slowly, but its good to be reacquainted with it, and seeing it first-hand this month in Jerusalem really brought it home to me afresh. Especially with the activities of ISIS breaking up the nations listed, on the back of the funding and training of Sunni rebels (to overturn Assad, Gadaffi et al) by the CIA & their co-operatives in UK, Israel, Nato.