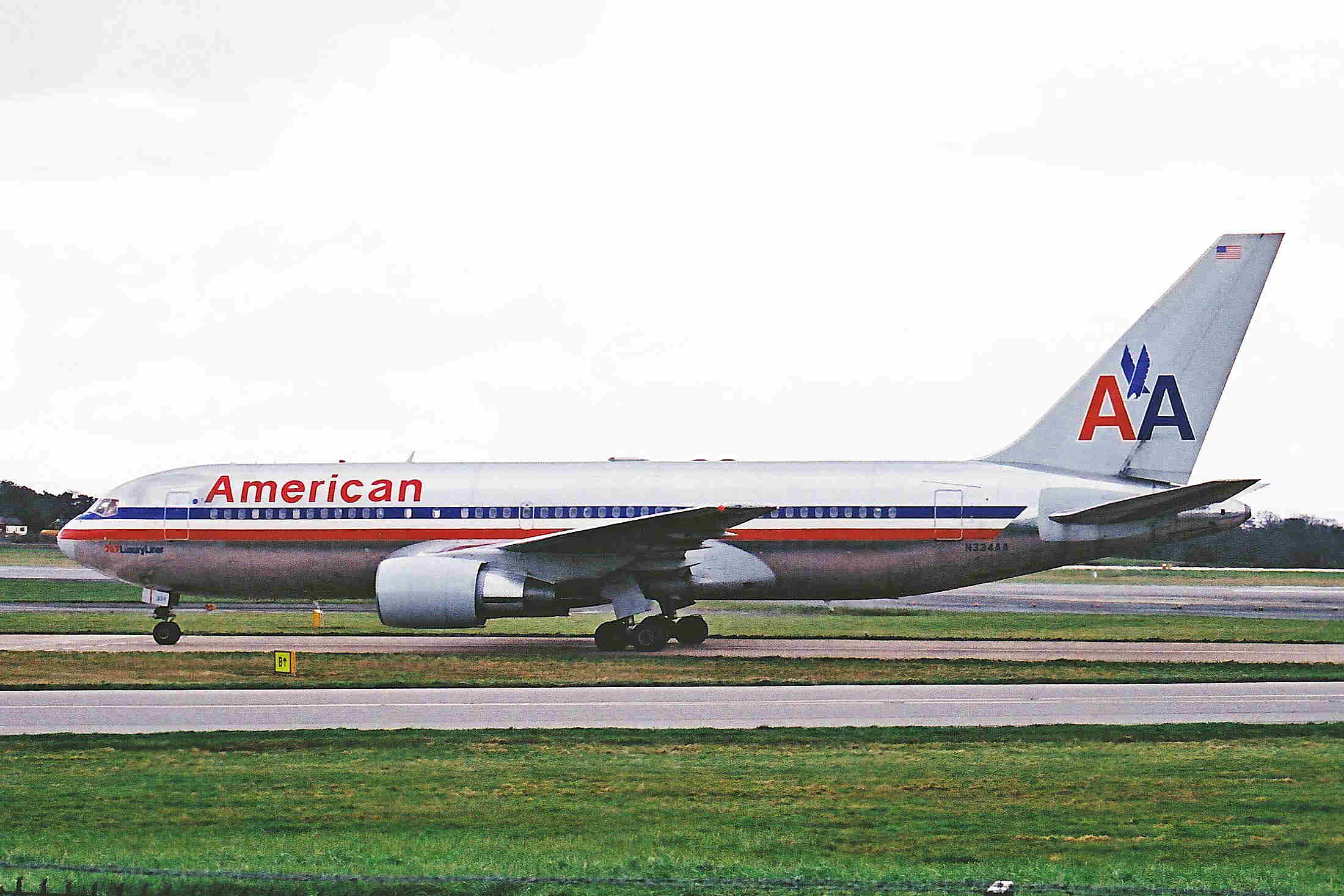 (Boeing 767, piloted by Mohammed Atta)
The Bureau of Transportation Statistics (BTS) has no record of Flight 11 departing Boston's Logan Airport on 9-11. Such data automatically records electronically when a flight takes off. This is just one of the anomalies James Perloff has unearthed about the plane that supposedly
crashed into the North Tower of WTC.
This is a highly condensed version of James' website article.  It dissects the official narrative of American Airlines Flight 11, the plane that, allegedly, Mohamed Atta and four other Al Qaeda terrorists hijacked and flew into the World Trade Center's North Tower. He emphasizes newer insights, especially some he found on an enlightening Internet forum thread.
by James Perloff
(henrymakow.com)
The official story of what occurred on Flight 11 is based on phone calls from flight attendants Betty Ong and Madeline Amy Sweeney. The pilots never sent mayday communications, and like all pilots that day, never punched in the hijack code as they were rigorously trained to do. None of Flight 11's 81 passengers made calls.
No audio exists of Sweeney's calls to American Airlines Flight Services, only notes. Of Betty Ong's 25-minute call to AA Reservations, just 4 audio minutes have been made public, even to the 9/11 Commission.
False flags are often coordinated with DRILLS. Our thesis: Ong and Sweeney believed they were participating in a HIJACKING DRILL. It's well known that NORAD and the Air Force were holding military exercises that day, including simulated hijackings. Here are more glaring anomalies about Flight 11:
â€¢ No real evidence (authenticated passenger lists/boarding passes, sworn eyewitness testimony, video) proves the alleged Muslim terrorists boarded this or any other 9/11 plane.
â€¢ In their phone calls, both Ong and Sweeney initially misidentified the flight as "Flight 12," as many as four times, before correcting it to "Flight 11." (Flight 12 was the reverse trip, LA to Boston, of Flight 11). Even allowing for nerves, how could two attendants make this same mistake? Script error?
â€¢ The Bureau of Transportation Statistics (BTS) has no record of Flight 11 departing Logan Airport that morning, as BTS should. Such data automatically records electronically when a flight takes off.
â€¢ Considerable confusion exists about which gate Flight 11 departed from. Some accounts said Gate 32, some said 26.
â€¢ In Sweeney's first call, to Logan's AA Flight Services, she said two attendants had been stabbed on Flight 12 "at" Gate 32; the call quickly disconnected. Two AA employees rushed to gate 32, but found an EMPTY PLANE.
â€¢ Betty Ong placed her call to American Airlines reservations. This contradicted hijacking protocols, and reservations is the last place for emergency calls, due to the typically long hold times.
â€¢ In the Ong call's recording, she is asked FOUR TIMES what seat she's in. She kept avoiding the question, finally responding "jump seat 3R." The question's answer, obviously not in the script, had to be improvised.
â€¢ "Jump seat 3R," an attendant seat at the plane's rear, had no air phone to make outside calls. Ong would have faced the last row of passenger seats, which have no air phones behind their backrests. This reduces her options to a cell phone. Most agree that, in 2001 technology, connecting a cell phone call in an airliner at high speeds and altitude was very difficult, though not impossible. It stretches credibility that Betty maintained a cell connection 25 minutes without getting "dropped." 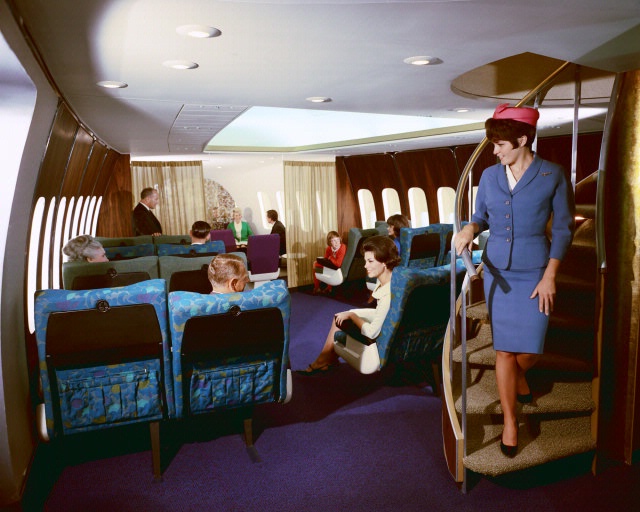 â€¢ FBI records prove that in Ong's original recorded call, she said a hijacker "stood upstairs." Although Boeing 747s have stairs, Flight 11 was a 767, which do not. The drill's "scriptwriter" had evidently traveled on 747s and had these in mind. Small wonder the audio made public deleted Ong's description of a hijacker "upstairs."
â€¢ In the released passenger manifest, seated with "Mohamed Atta" in row 8 was Emmy Award-winning screenwriter David Angell, co-creator of the TV series WINGS (about an airline). Behind them in row 9 was Daniel Lewin, former captain in the Israeli Defense Force and veteran of Sayeret Matkal, which specializes in counter-terrorism and assassination. Lewin reportedly "was trained to kill terrorists with a pen or a credit card."
â€¢ Ong stated: "We can't breathe in business class, so somebody's got mace or something. . . . we can't even get up to business class right now, cause no one can breathe." But as career flight attendant Rebekah Roth notes in her 9/11 bestseller Methodical Illusion a pressurized cabin would push mace into coach - yet Ong never coughs.
â€¢ Some 3 minutes before impact, Ong said passengers in coach were still unaware of what was happening. Yet according to Ong and Sweeney, two flight attendants had been stabbed and one passenger (Lewin) had his throat cut. If breathing was "impossible" in business class, its passengers would have retreated to the plane's rear to breathe (and escape the violence). Coach passengers would surely have asked what was happening.
â€¢ In a real hijacking, would two flight attendants make extended calls? The cabin crew was now seriously undermanned. The three stabbing victims would have needed help; the pilots, never mentioned, would probably be dead or wounded. Panicking passengers would need reassurance. Yet somehow Ong stayed on the phone 25 minutes; Sweeney likewise spent extended phone time.
â€¢ Reservationist Vanessa Minter, who answered Ong's call, stated in a televised interview that the FBI arrived FIVE MINUTES LATER and took her off the phone. Since Ong's call was the first notice of the hijacking, how did they respond so quickly?
â€¢ American Airlines' Managing Director of Corporate Security on 9/11 was Larry "Mandrake" Wansley, FBI veteran, co-author of the book FBI UNDERCOVER: THE TRUE STORY OF SPECIAL AGENT MANDRAKE. 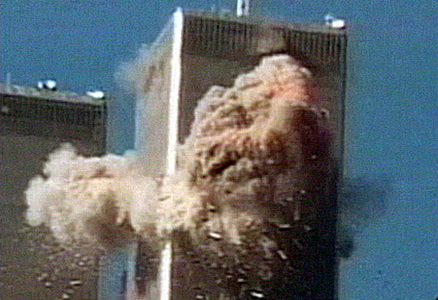 (North Tower Explosion. There were no planes.)
â€¢ According to Wansley's 9/11 Commission testimony, he learned of the hijacking at 8:45 (Eastern) in Dallas. Getting little information from AA's Systems Operation Control, Wansley called his friend Danny Defenbaugh, Special Agent in Charge of the FBI's Dallas Office. Defenbaugh, who had headed the FBI's investigation of the 1995 Oklahoma City bombing, said he knew nothing about the hijacking. "Defenbaugh told Wansley to hold and got a couple of other people together which Wansley said 'started the ball rolling.'" Yet FBI agents had already taken Minter off the phone at about 8:25 Eastern!
For more anomalies, plus documentation for the above, see my full article.   I conjecture that after boarding, a military exercise was announced. Flight 11's crew may have moved to a specially prepared plane with handlers on board, at Gate 26. This would explain the gate number confusion, the empty plane at Gate 32, and why the BTS has no record of the flight leaving. The passengers were told they weren't needed for the exercise; they and their luggage would be moved to United Flight 175, which would shortly depart for the same destination: Los Angeles. Flight 175, another Boeing 767, had only 56 passengers and could easily have accommodated Flight 11's. Of course, Flight 175 allegedly struck the second tower.
The purpose of the flight attendant calls? The same as all the 9/11 calls: give the government the narrative required to start its endless "War on Terror." Since none of the four planes had survivors to describe what happened, proof of a hijacking by "Middle Eastern men" relied on the calls.
In Flight 11's case, Ong and Sweeney reported the hijackers' seat numbers - enabling the government to match those passengers to its terrorist watch, as well as a list of names in Mohamed Atta's luggage, which conveniently didn't make it onto Flight 11. Of course, Truthers ask why Atta would bother bringing luggage on a suicide mission.
-------------
James Perloff is author of Truth Is a Lonely Warrior,  an expose of the satanic drive for a new world order.
Related- 9-11 The Crime that will End the Empire
------------Best Selling 9-11 Novel Disappoints

You can argue forever the anomalies of 911. It is all fluff. All that is of importance is elements in the US government and the Israel Mossad orchestrated the whole event to start the "war of terror". 911 is also proof positive there is no US government in the sense of We the people. It is a corporation acting in its own self interest. People are expendable.

The Constitution is a Divinely inspired document. If we follow the Constitution it would be as relevant today as it ever was. I guess the framers failed to consider the possibility that if all three branches of government along with the media became completely corrupt there would be no system of ultimate justice. Or maybe they felt the citizens would be more attentive. So here we sit debating the technicalities of all these false flags and nothing will be done. Go out and vote, yeah that should take care of the problem. Or maybe you could write your Congressman.

For me the biggest hole in the official lie (which was full of holes from the beginning) is WTC Building 7 collapsing into its own footprint at free fall speed like the other two towers, but IT WAS NEVER HIT BY A PLANE. How does a 47-story skyscraper built to exacting standards to withstand earthquakes and strikes by jetliners just cave in on itself within seconds, if it wasn't wired for demolition beforehand? The commission report does not even mention Building 7.

Re: Sept 11- Glaring Anomalies About Flight 11. I agree, that the only thing that matters is that three buildings fell, (built with apparently 500% redundancy for aircraft collisions) and two airplanes are being blamed for this Miracle of physics. Grow some eyes and ears people.

The infuriating thing about 9/11 and the multitude of lesser false flags which both preceded and followed it is that, although most Americans know it was as phoney as a three and a half dollar fed reserve note, everyone seems content to put up with the extremely phoney "war on terror" it was designed to create and which has already destroyed a hand full of countries in the world, caused the murder of upwards of two million people, mostly using U.S. military, and turned the U.S. into a ruthlessly insane police state wherein everyone is made to obey patently unlawful statutes in the name of "emergency" while the ruling elite has quit obeying any laws at all while gathering a massive military presence to cow the now restless and resentful public.

At the 00:15 mark in the below video shows a 767 flying through a wispy fog. Make note of the large roiling vertices left in the fog long after the plane has past. Do you see any evidence of a vortex in the smoke in the north tower picture above, moments after Flight 11 was said to have past?

Flight 175 left no vortices either, when it's filmed flying through the smoke of the north tower.

The planes don't matter at all. They don't matter because they didn't have anything to do with the collapse. Because 747's could not collapse tower I and II, and building 7.

The planes were used as the dramatic misdirection* from the controlled demolitions of the three buildings.
You guys are still arguing over whether or not the stage magician used a real or fake saw to cut a lady in half.