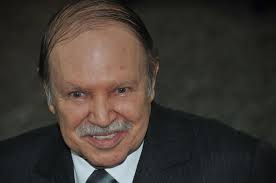 (left, Algerian President Abdelaziz Bouteflika is
considered a Mossad agent.)
Patriots believe Algeria's economic collapse and its dismemberment are planned by the Zionists. They saw how the Illuminati dismembered Sudan, how they are doing so in Iraq, Syria, Libya and Yemen. They believe that Algeria is the next target of the Zionist plan to Balkanize the Arab world..
Mohand Tahar Yala, another retired general, stated in El Watan (June 14, 2015) that Algeria is run by a "satanic intelligence." And he reported this recent comment by Israeli university intellectual Mordekhaĩ Kadar: "If the world wishes to bring stability and calm, it has no option but to let the modern Arab states collapse and split up into small states, each based on a homogenous group (= minority)."
Latest!   Touflik Replaced
"We are on the verge of a global transformation. All we need is the right major crisis and the nations will accept the New World Order."  David Rockefeller, Sept 23, 1994
by N. Thor
(henrymakow.com)
N Thor, is an Algerian writer and historian
The Arab West extends from the Mediterranean down to Senegal River and Algeria is its most powerful state. And guess what? This state is going to be divided into six mini-states.
Algerians are about to enter the hardest times that any of them have ever known. I am not just talking about the fall of oil price either. Based on of the information that I have gathered, we are about to enter a "perfect storm."
Among the prominent men who destroyed Algeria and are going to dismember it are General Toufik, head of the military intelligence and President Bouteflika. Both men are crypto-Jews, Freemasons and Trotskyites. 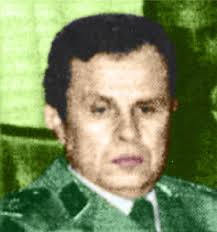 General Toufik, left, proclaimed himself Rab Dzayer ("God of Algeria"). Algerian intelligence officer M. Samraoui now in exile in Germany where he twice escaped assassination attempts by the Mossad  revealed that the megalomaniac General Toufik engineered terrorism in Algeria and is an "Israeli intelligence agent" who provides intelligence to the FSB (the former KGB) (NB: "God" was formed in the Soviet Union by the KGB).
"God of Algeria" ousted the nationalist Liamine Zeroual from power in 1999 and put in power Abdelaziz Bouteflika. One of the best Algerian specialists, London-based Dr Haroun Hassine, recently uncovered an intelligence document revealing that president Bouteflika too was a Mossad agent (Watch interview with Dr Haroun on Youtube ).
These corrupt men have engineered scandals involving billions of dollars. They also are behind a plan to create terror and make the Algerians serfs in the New World Order!
Retired Algerian, General A. Medjahed, wrote in the Algerian daily newspaper El Watan (May 20, 2014) that the state of Israel is extremely powerful in Africa and that its "plan is to get Algeria exploding" among other North African countries. Raul M. Braga Pires, a researcher-correspondent at Observatorio Politico, Lisbon, wrote in the same newspaper (May 16, 2014): "One observes a tendency to federalization (in North Africa) largely favoured by the West. It is the case in Morocco (to prevent the Zionist-occupied Western Sahara from gaining independence). It is quite certainly what is (also) awaiting Algeria." 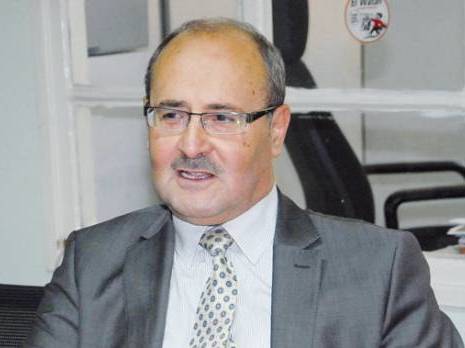 Mohand Tahar Yala (Left), another retired general, stated in El Watan (June 14, 2015) that Algeria is run by a "satanic intelligence." And he reported this recent comment by Israeli university intellectual Mordekhaĩ Kadar: "If the world wishes to bring stability and calm, it has no option but to let the modern Arab states collapse and split up into small states, each based on a homogenous group (= minority)."
General Yala called for a coalition of patriots to urgently step up a rescue action. Sadly, he and his colleagues within the military institution are standing almost alone, at least as an organized group, in exposing the Algerian establishment in the hope that a strong opposition would rise.
Although this might be a sign of an awakening among the Algerian intelligentsia, the chances of the political opposition led by the patriotic Soufiane Djilali doing so appear to be close to zero. Most Algerians, like most citizens of the world, don't understand how the Jew World Order works. They are so consumed with other things. We live in a society that is addicted to entertainment.
And while the rhetoric in hard line Islamists is more bellicose than ever, and while the Algerian forces along the line of contact with the many pockets of jihadists are constantly shelling their mountain bases, no real, full scale, attack has happened. Everything seems to be planned by the Illuminati in such a way that once the events got out control, jihadists will burst on the scene from the mountains and from south Tunisia and Libya.
We will see the political "divide and conquer" play out next year or in 2017 already. Jihadists are increasing in number throughout the country and are accumulating weapons, waiting for the right moment to make an unholy mess of Algeria.
It is becoming increasingly obvious that these vipers are going to be used to mount military attacks to break the popular uprising against the regime and drag the country into a civil war that will pave the way to France and the US to intervene and dismember the country into six mini-states: Algiers, Tlemcen, Kabylia, Constantine, Ghardaĩa and the Sahara.
Yes, sure, the IMF will totally hijack the country. There is the oil and some industrial and natural resources which Illuminati corporations will be able to acquire for a fraction of its value, but these benefits pale in comparison with the immense success of fulfilling Ben Gurion's dream of destroying this huge realm called the Arab world.
Also by N. Thor
Masonic Jewish Subversion, Algeria Style
Crypto Jews Feast on Algeria
Related:
Zionists Use Divide and Conquer in N Africa