The Dawn of the Homosexual Police State 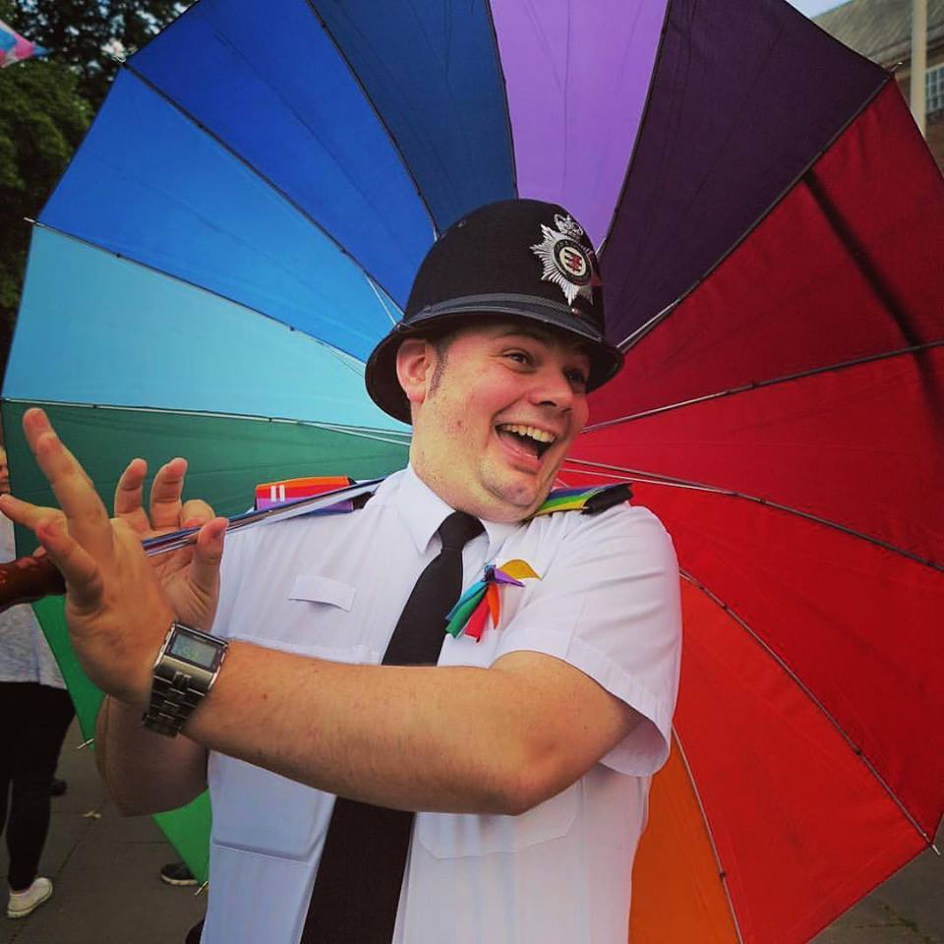 broken up their order."  Protocols of the Elders of Zion (16)

Sent to a Communist-style re-education course,

Mark told his employer to go sodomize himself.

Makow comment- The subtext of relentless gay promotion and gay massacre psy ops is that straights must accept sodomy as natural and engage in it. Tolerating gays is not the issue. The Illuminati don't tolerate heterosexuals. The aim is to undermine marriage and family and destabilize and divide society.  Instead of worshipping God and Christ, we will worship Freemasons, Jews and gays.

by Mark
(henrymakow.com)
I have been a fan of reading your published articles for many years and enjoy the material you produce for your website very much. It's refreshing to see a person stand up for what is right.
I agree that behind the so-called 'powers' lies a demonic influence whose aim is to control the mindset of many people on a global scale. Even the Bible states in 1st John 5:19 about this quite clearly. [19 We know that we are children of God,and that the whole world is under the control of the evil one.]

One part of the agenda for breaking down males and emasculating them is promoting the  homosexual lifestyle 'choice'. It's now seen as offensive to even suggest anything remotely against what a very small percentage of the human population enjoys: anal sex, oral sex, fisting and other unnatural acts with the same sex, AKA being 'gay'. If you are 'straight' you get punished for not sharing the same views as homosexuals. In fact, you can lose a job, get dragged into a court of law, end up on a TV news show, and slandered on 'social media' (more like anti-social media).
The natural males who enjoy sex with a woman, especially the rare kind who want to get married and have children ... don't parade each year through a city waving flags around and dressed up to show off their body parts and in front of children and other people who don't need to see that. We don't have a Straight Day event and don't drag gays into a court of law or punish them through loss of a job because they said something offensive (mostly because it would NEVER get that far anyway). Straight people don't care what gays get up to. They couldn't care what they do in private and mostly they DON'T WANT TO KNOW about their practices.
But sadly the promotion of special 'rights' for these few people on our planet is now so adrift from common sense that it's come down to the point where we no longer have freedom of speech. 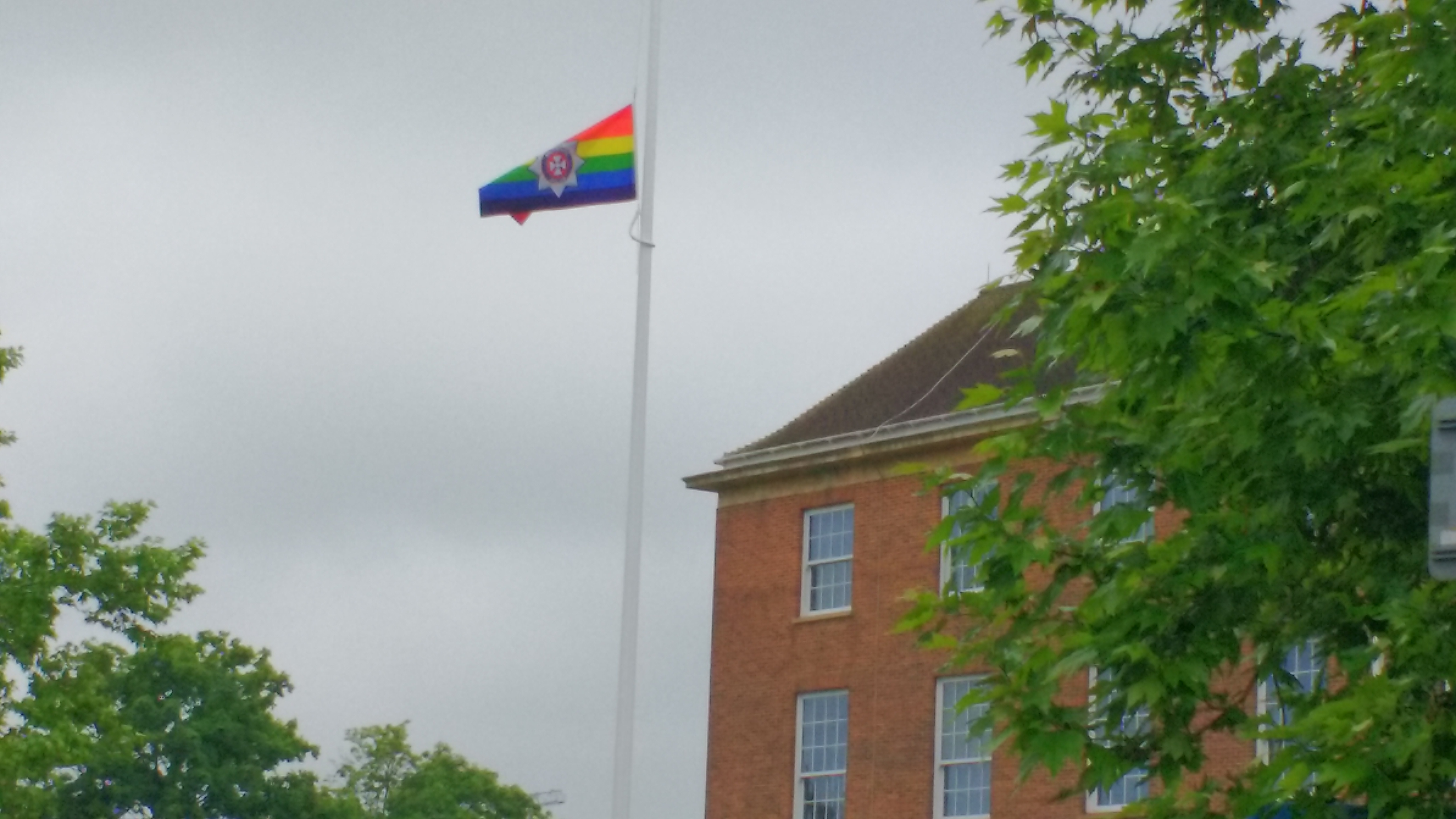 I drove by the Wiltshire Police Headquarters today and could not believe my eyes when I saw a rainbow flag half mast. I was stopped in traffic outside and took a photograph on my mobile phone, hence why the quality is not great. So let me get this right... When a load of straight people get killed, blown out of the sky in a plane, shot on the streets, murdered in acts of war from illegal invasions by the United Snakes of America and friends, no flag at all gets put half mast. When a TERRORIST shoots a load of gays in a club, a special flag that is known for representing the Lesbian and Gay Liaison Officer (LAGLO in the UK Policing world) is placed half mast outside the police HQ!!
This demonstrates totally that we are being put second. It's obvious nobody wanted the men who were killed in Florida shot for being gay; not for any reason would a normal person want that.
I once told a joke to a group of what I considered male work colleagues: "If Russia attacks Turkey from the rear, do you think Greece (as in Grease) might help?" For that I was called into an office where the manager told me that I may lose my job for such a terrible homophobic 'outburst'. I was put on an Action Plan for my 'homophobic' ways but a week later I told them to shove it where the gay guys like to put cock! It felt great to leave an organization that looked after homosexuals more than straight people and now I am self employed I can say what I like. If someone's offended by my honest feelings towards not just homosexuals but anything I care to openly discuss then too bad for them.
What more can I say, this society of self righteous feminists, protectors of gay special rights, and other busy bodies who spend lots of time worrying about who might be damaged by words that were not ever meant to offend drives me insane.
At least I have lots of male friends who like me speak out about whatever they want to, no worry about who comes back to us and complain.
Not in a way that means we're all rude and arrogant, but not afraid to say what we really think about anything, especially the gay flag outside Wiltshire Police HQ today. I am sure they'll have plenty to say about that and no doubt some 'queer' will get his knickers in a twist!
--------
Related-  The Dawn of the Feminist Police State
-------------   When Did Gays Become "The Chosen?"
First Comment from Dan:
I noticed last week that flags were at half mast everywhere in this city.  The banks, post offices, the regional Boy Scout headquarters - even the local VFW (Vets of Foreign Wars).  I found the last one truly 'cucked', that an organization of combat veterans would do that.  That's put the deaths of soldiers in combat on par with bystanders killed while out cruisin' for cock.
Of course Obama gave the Presidential order for lowering the flags, and the Governors of fifty state complied.  But I was glad to see that one County Commissioner, in Alabama, did not.  Tucker Dorsey of Baldwin County released a statement that reminded me of when local elected authorities did their job by the letter of the law.  He said:
"I have been asked why the County Commission has not lowered its flags in respect for the victims of both the Paris and San Bernardino terrorist events (and now Orlando). The Chairman of the Baldwin County Commission has the privilege of setting the flags at half-staff, and I, serving as chairman, have deliberately chosen not to lower our flags. Please allow me to share those reasons.
Lowering the flags to half-staff after mass shooting or terrorist event is not a valid circumstance or memorial as specified in the U.S. flag code (usflag.org), Section 175, paragraph (m). I realize that the President and Governor may make the order, but I believe and interpret their order inconsistent with the adopted flag code.
Secondly and principally, our flag code specifies that 'no other flag shall be above the flag of the United States', and I characterize that as US citizens holding our head up with courage above all others. When the flag is at half-staff, our country's head is figuratively held low, and quite frankly, I am not willing to hang my head down because of a terrorist attack.
Moving forward, please join me in regular prayer for peace, for our military, law enforcement, and first responders along with their families."