When Did Gays Become Jews? 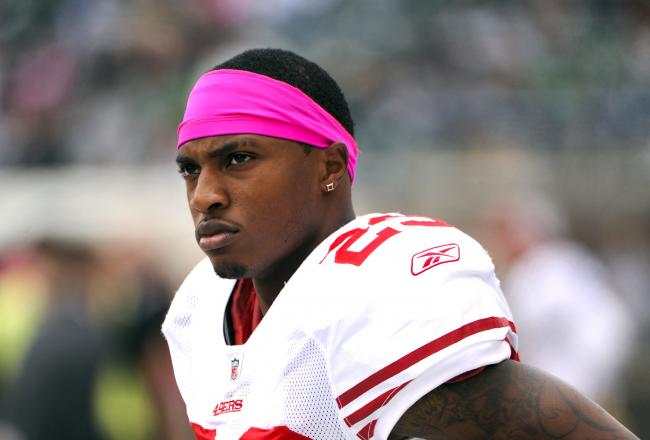 (left, 49'er Cornerback Chris Culliver forced to wear pink under the ruse of supporting breast cancer research.)
Last week, a football player was forced
to make an abject apology for expressing
distaste for homosexuality in the locker room.
When will heterosexuals have human rights?
"We must introduce into their education all those principles which have so brilliantly broken up their order."  Protocols of the Elders of Zion (16)
by Henry Makow Ph.D.
When did gays become God's Chosen People?
When did homosexuals get "rights" but heterosexuals lose theirs?
Since Illuminati Satanists stepped up their campaign to undermine heterosexual society, that's when.
This heterophobic campaign has reached the last redoubt of masculinity, NFL football. In the run-up to the Super Bowl Sunday, a controversy broke out when 49'er cornerback Chris Culliver Tuesday expressed discomfort with having homosexuals in the locker room as teammates.
"I don't do the gay guys man," said Culliver. "I don't do that. No, we don't got no gay people on the team, they gotta get up out of here if they do. Can't be with that sweet stuff. Nah...can't be...in the locker room man. Nah."
Team management immediately distanced themselves from Culliver's controversial comments, releasing a statement Wednesday. "The San Francisco 49ers reject the comments that were made yesterday, and have addressed the matter with Chris," the statement read. "There is no place for discrimination within our organization at any level. We have and always will proudly support the LGBT community."
For his part, Culliver issued his own statement of apology via the team office late Wednesday:
"The derogatory comments I made yesterday were a reflection of thoughts in my head, but they are not how I feel. It has taken me seeing them in print to realize that they are hurtful and ugly. Those discriminating feelings are truly not in my heart. Further, I apologize to those who I have hurt and offended, and I pledge to learn and grow from this experience."
LET'S BE VERY CLEAR
"Gay rights" is a ruse to disguise the real Illuminati agenda: Replace heterosexual norms (monogamy, marriage, children, family) with homosexual norms (lifelong sexual promiscuity.)
The Illuminati are Satanists. Satanists declare what is sick to be healthy and vice versa.
I am NOT a "homophobe." This is a hateful smear typical of the Illuminati.
Homosexuality is a developmental disorder. Many homosexuals agree. I do not believe in persecuting or being unkind to people who suffer from it.
The real issue is social engineering. Heterosexuals in effect are being told that to resist homosexual overtures is to be a "bigot."
This hateful, disingenuous psychological attack on society is shameful and repugnant.
Yet it is being led by government and mass media who have gone over to the Dark Side.
Our schools are grooming our children for homosexual activity. This is taking place under the guise of "bullying."
Parents should be storming the school board and legislature. Are they so stupid?
I don't care what homosexuals do in private. Most heterosexuals don't. But this isn't about gay rights; it is about re-engineering humanity for the creation of a world police state.
The Illuminati faked the Sandy Hook school massacre as an pretext for gun control. How dare they demand sweeping legislation without displaying bodies and releasing surveillance tapes? Children may have died but Adam Lanza didn't do it. This reeks as bad as 9-11.
Mainstreaming homosexuality emasculates society as much as taking away assault rifles. It should be fought with as much vigor. The same applies to women in combat roles.
Why do people have so much trouble finding their "identity" these days?
Because identity is based on race, religion (God); nation and family (gender) -- all of which are being systematically undermined by the Illuminati. "We will undermine every collective identity except our own," they say in the Protocols of the Elders of Zion.
To have a healthy identity, we first have to establish ourselves as men and women. Then, usually as husbands and wives, and mothers and fathers.
Homosexuals don't know what gender they are.  Thus they are foisted on society as a model by our traitorous heterophobic politicians and mass media.
CONCLUSION
Heterosexuals have as much right to express their distaste for  homosexual activity as homosexuals have a right to engage in it. Chris Culliver's human rights have been trampled on.
Most Straights are prepared to accept homosexuals so long as they are not required to accept or engage in their practises. This applies to football players as well.
The forcing of sickness on our children in public schools is a red flag.
Western society has been totally subverted by a satanic cult, the Illuminati, based on the Jewish Kabalah, and backed by the central banking cartel.
We are being inducted into this cult through the mass media and the education system.
The "poor persecuted minority" meme is used to strip majorities of their rights, and enact "change."
Change always is negative because Satanists have taken charge.
---------
Related---

First Comment by Dan:
Culliver's forced apology sounds like it was written for him by one of the team attorneys.What's made Homosexual 'sacred' is organizations like "Human Rights Campaign", which are exact replicas of Jewish lobbies like ADL and AIPAC.But the engine is media.  Nobody gets to make valuable football players apologize for nothing before millions without media owner's mandate.  This is now policy. (ESPN is owned by Disney, the media conglomerate that's been "imagineering" gender-racial ambiguity for children for a long time [1].)It always happens that when honest men and women are pilloried for speaking up, the lackies and suck-ups come forth to spit on them, just to get a pat on the head by their masters.  "Seattle Seahawks punter Jon Ryan thinks Chris Culliver should be suspended for his negative comments about having a gay teammate".Listen, TV sports advertizing is billion dollar industry.  It's been used as a behavior modification tool on men for 50 years. They sell more than beer through sports. How long it will be before they show two football players queer kissing on TV and the tabloids run soap opera like series on an NFL "bromance".   It's going to happen.  And sooner than TV watchers may think.These shows aren't directed at adult men, but at boys.  If I had a son I wouldn't let the TV programming creeps get inside his head.Men should see the writing on the wall and stop feeding the beast. Cancel the cable and satellite TV.  Quit paying to be brainwashed.[1] BOYCOTT DISNEY http://en.wikipedia.org/wiki/Gay_Days_at_Walt_Disney_World

Comments for "When Did Gays Become Jews?"

Right on the money with this article. Personally I stopped watching football at the end of the previous season. After watching for over 40 years I’ve had enough. Now that I’ve stayed away for a season I have no desire to watch any more emasculating propaganda. Remember some years ago the controversy of female reporters in the locker room? Feminism won that one. Female referees now. Players wearing pink. Gays now, and of course any player who criticizes or objects to these decisions Is on his knees in a heartbeat with politically correct apologies. I will no longer watch the Super Bowl. I will no longer watch what has become a hyped-up Propaganda Bowl.

"The forcing of sickness on our children in public schools is a red flag." just about sums it up.

When will people wake up from their hypnosis and smell the coffee on
these issues?

Over here in the UK David Cameron is pushing a similar corrupt agenda regarding homo marriage and its "legalisation" little realising or
caring that he is in fact delegitimizing the whole process of lawmaking.

Such are the actions of the puppets of lucifer.

I have no trouble boycotting these gladiatorial spectacles masquerading as expressions of real sportsmanship. I've never been interested in pro football. Super Bowl Sunday is just another week day for me. It's another subliminal tool of enslavement and conformity. The London Olympics was like something out of the decadent reigns of the Emperor Nero or Caligula.

I couldn't agree with you more. This is is a carefully thought out demasculinization of the male species. Even the police cruisers are not exempt.

Thanks for all your stimulating articles and keep up the good work. http://www.nbcmiami.com/news/Miami-Beach-Police-Unveil-Pink-Patrol-Car-for-Breast-Cancer-Awareness-Month-131100573.html?fullSite=y.

Here's a statement I would have written for Culliver:

Why don't you people get a life. If you call yourselves men, then act like men. Most straights do not like queers at any level. Homos are dirty perverts and this behavior is something that they choose. The whole government system promotes this disgusting activity. Their behavior is demonic. I did not bring up this subject but I was asked by someone in the media about that and I gave him an honest answer. I will never apologize for giving an honest answer. If anyone doesn't like it, then go pound sand........

-----------------
If the media likes gays so much, then why not have them organize the GFL? That's right, the Gay Football League and see how many people show up for that? The problem with men like Culliver is that he was spot on but then was pressured to back-track. His team mates should have stood behind his statements and refuse to play football. That would be the end of that nonsense in the NFL.

The NFL would be wise to let this subject matter go and forget about it or they will lose their audience just like the mainstream media. People are sick of hearing about homosexuals; enough already.

Since homosexuals are invariably predatory (even the sissies), I wonder how they're keeping the lid on stories of teachers preying on fatherless boys. There has to be an epidemic of school sexual coercion by now. I remember homosexual teachers were allowed to do their thing way back when I was in school, as long as they didn't get arrested. (the reason is all the teachers in that city were Freemasons).

Probably it's become impossible to report such stories. I am sure that authorities are even less inclined to 'believe' a boy who reports homosexual advances or rape than ever. Police are on notice that they themselves can be punished for going after gays. Students are being told told that it's 'homophobic' to refuse same sex sexual advances. We know that what queers call 'bullying' is actually rejection of their sexual advances.

It must be epidemic. Half or more boys today have no father at all, and millions live with mother's that are struggling to pay the rent. It's a field day for pederasts.

Gays became Gods chosen people when the powers that be bowed down to the god of this world and kissed his butt. The name of that god is Satan AKA Lucifer the god of the chosen people, politically correct special interests and the powers that be.
The god of Christianity that created the universe is still opposed to homosexuals and all other unrepentant sinners. Those that won't repent and accept grace through Jesus Christ are still under the penalty of gods laws.