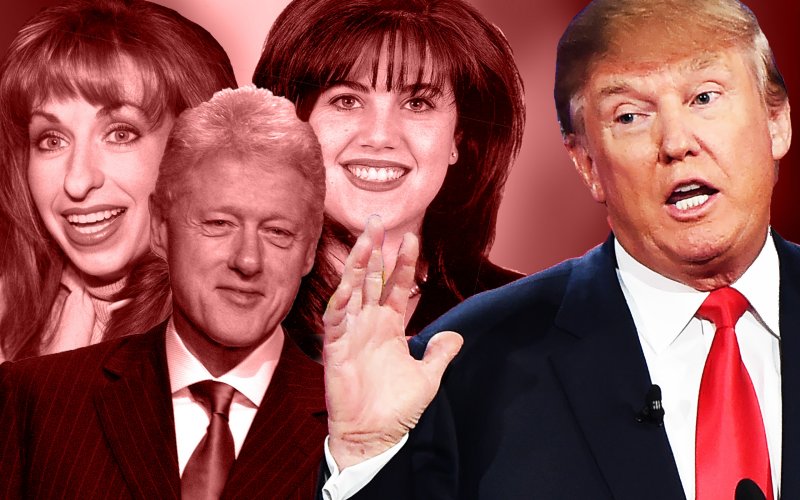 ZIONIST JEWISH FEMINIST MAFIA COMING AFTER DONALD TRUMP
It's apparent that we do not have a free press. The media's collusion in
9-11 and false flag terror should have been enough, but the current bias against Trump is truly jaw dropping.
The media is headlining every female Trump has ever propositioned
while at the same time ignoring Hillary Clinton's role as Bill Clinton's
enabler and protector in far more serious sex crimes.
The sexual harassment smear is the standard way the Communist Deep State disposes of people who deviate from their script.
Related - When Hillary Clinton ordered Sex Slave Cathy O'Brien to "Eat Me"
---------------   Yoko Ono - I had an Affair with Hillary Clinton in the 1970's
by Garth Sherwood
(henrymakow.com)
Since the Feminist movement in America is funded and controlled by Illuminati Jewish Bankers,  it's not surprising that this Feminist Mafia acts at the behest of this banker entity to target and attack their enemies.
To that end, right now Donald Trump is in the cross-hairs of the banking cartel, because he is against the Military Industrial Complex; and he is "America First," not "New World Order ('NWO')" based in Jerusalem first.
He is against the Illuminati doctrines of borderless nations, abolishing of the family, eradication of organized religion (especially Christianity.)
He is willing to work with Russian President Vladimir Putin to destroy ISIS and global terrorism funded/created by Western/Saudi/Turkish/Israeli (Freemasonic) Intelligence.
He is an alpha male with a healthy (not excessive) love and respect for women; he is against foreign nations being dependent on the USA for all of their military, financial, security, and social needs.
Above all, he wants to strengthen and empower America, not throw it on to the trash heap of history after being "fucked and cucked" by the powers that be, only to create a NWO headquartered in Jerusalem.
All of this has earned him the undying ire and hatred of the Illuminati Freemasonic Zionist Bankers, the literal embodiment of Satanic Luciferian ideology on Planet Earth, because, just like Putin, he stands in their way of global governance and the enslavement of the world's masses.
Therefore the Zionist Feminist Mafia, headed by such whores as California Feminazi Attorney Gloria Allred, are now in a "recruiting drive" designed to draw each and every woman out of the woodwork, over the past 50 years, who ever may have had a sexual dalliance or relationship with Donald Trump, in order to use the Clinton-Biden enacted Violence Against Womens Act ("VAWA") Law (which calls for mandatory arrests of the accused even without evidence or probable cause) in order to nail him to the wall, and to take him out of the Presidential Race.
Instead of outright assassination, the Illuminati Jewish Bankers have found that this mechanism of political character assassination and unfair, non-evidence basis, "hearsay" type of allegation, even from decades ago, is the most useful and effective way to discredit, defame, slander, libel, intimidate, and remove from society those men whom they deem to be threatening to their agenda of global conquest.
It's very important that the American People (men and women alike) recognize that the same bankers who are killing innocent men/women/children all around the world, are completely and totally behind this VAWA-based assassination technique, using the "stupid useful idiots" of rabid Feminists and the captive media.
The very ironic side-bar result of this was the fact that the useful idiots President Bill Clinton and Senator Joseph Biden, who wrote and enacted this draconian unconstitutional STASI- like federal VAWA Law, are also the greatest violators of them.
Countless stories of rape, child molestation, sexual assault, pedophilia, and domestic violence continue to dog these two jackass politicians, but they are never prosecuted or investigated , even when there are mountains of video, scientific, and testimonial evidence, because this type of "immunity" was their reward for getting this federal VAWA law placed on the books.
----
Related
Joe Biden asks 11 year old girl, "Do you know how horny I am?"  Where is media outrage?
Trump was Perfect Gentleman, says former Miss Teen Nebraska  (ABC news contacted her for dirt)

Trump crucified for locker room talk by the MSM 24/7. Meanwhile Bill Clinton who is as dirty as sin with teens and women gets away with it and campaigns for his wife who is running for US President. On the other hand, Bill Cosby is dragged through the coals by the MSM just like they are trashing Donald Trump as some kind of sex addict.

Lest we forget about Server-gate, deleting 30,000 emails, and pay to play violation of the RICO Act with the Clinton Foundation so she gets a pass on everything from the MSM. The federal VAWA Law is not going to stick wishful thinking on the part of leftist party and TPTB. Establishment is pulling out every trick in the book and when they all fail, imagine false flags with Russia will occur.

Finally, Wall Street Journal breaks the silence on Hillary. Quote "The Obama administrationâ€”the federal government, supported by tax dollarsâ€”was working as an extension of the Clinton campaign. The State Department coordinated with her staff in responding to the email scandal, and the Justice Department kept her team informed about developments in the court case." http://www.zerohedge.com/news/2016-10-14/wall-street-journal-blasts-press-consistently-buries-hillary-clintons-sins


Michael Issikoff says NBC is sitting on devastating tape of Juanita Broaddrick for 17 years. The MSM is in Hillary's pocket they will never expose her. http://www.americanthinker.com/blog/2016/10/michael_issikoff_says_nbc_is_sitting_on_devastating_tape_of_juanita_broaddrick_.html

It is unfortunate that many on the alt-right are embracing Donald Trump as some kind of savior when he is a pied piper leading them up the garden path. Trump is an old friend of the Clintons and is nothing but a Clinton plant. His sole purpose is to throw the election to Hillary and keep out other Republicans that would have had a better chance of defeating Hillary Clinton. Does anyone think Hillary Clinton would have had a realistic chance against any other candidate, or that if the Clintons had to choose who to run against they would have chosen anyone other than Trump?

Moreover, the purpose of the Trump candidacy/sideshow is to ritually discredit and humiliate the values he purports to represent (race awareness and survival, national economic revival, healthy male heterosexuality, not bowing down to political correctness, opposing global elites etc.).

Notice how the latest Trump allegations are being used to ramp up the whole SJW narrative to an absurd degree, the whole phony 'war on women' etc. By the time this election is over, will anyone dare to challenge the feminist narrative or anything else? Trump is an actor, playing the role of cartoon villain and buffoon designed to discredit any opposition to this agenda, and pander to the smug delusions of progressives that all who oppose them are ignorant moral cretins.

This is a perfect example to show young people just one of the many problems associated with fornication. Even the attempt to fornicate will drag down the man who tries to screw someone other than his wife. Sex is being used as a battering ram against the psychic of the general population. While Trump's offense isn't nearly as bad, it is still bad and it did spill on his family.

Remember, the government is a spiritual, mental, and sometimes physical fornicator and it uses this weapon against the people who are drawn into it.

The government is founded upon Satanic principles and this election is a prime example of the social depravity of both sides of the political spectrum. Since the government is Satanic there is no point in expecting something good to come out of these elections. I'm fairly thick-skinned but this is getting to be too much for me to follow.

The government of the United States is nothing more than a high-tech whorehouse and this is what happens when there we have little to no moral standards.

As an expert on the real history of the German Nazis and Hitlerâ€™s role as an agent of British Empire and the Wall Street bankers you must not be fooled about the current hysteria surrounding Trumps candidacy. Remember Judea declared a war on Germany in 1933. Remember also that the Zionist worked closely with the Nazis to resolve â€œthe Jewish problemâ€. Let me also remind you that Trump has worked closely with a lot of prominent Jewish businessman. According to Miles Mathis he might even have Jewish roots himself.

The point is that it is all smoke and mirror and is the usual double bluff they play on us. Trump is their man of choice and I suppose they plan to use him to implement a lot of unpopular policy which later would be blamed on him. They would wash their hands and say: We warned you about Trump but you wouldnâ€™t listen and still voted for him.

Even if I am wrong it is 100% guaranteed that Trump and Hillary play in the same team, so it does not matter who wins.