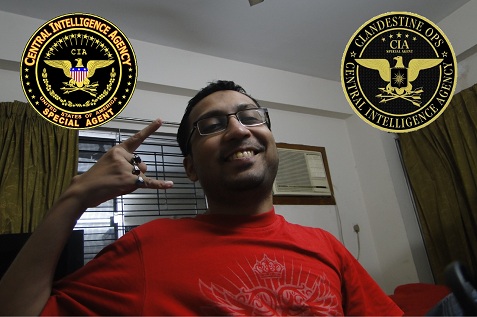 (left, CIA, Mossad, please phone. Salman Hossein is available for false flags, drug running, wet operations etc.)
Salman Hossein was forced to flee Canada in 2010
with police on his tail for antisemitic activities.
From his exile in Dhaka, Bangladesh, he says
Hillary will win and lead the US to world war.
Masonic Jewish central bankers can't  allow
Trump to win because he will turn on them.
They are already losing world control and Trump
would be the final nail in their coffin.
by Salman Hossein
(henrymakow.com)

After 9-11, there were eight regimes that had not submitted to the authority of the Jewish bankers. Four of them either got taken out or bullied/bribed/coerced into bowing down - Afghanistan, Iraq, Libya, and Sudan. The only problem is that recently China, Iran, North Korea, Russia, and Turkey have broken out of the sphere of control. Syria is still independent and fighting to maintain its sovereignty against Israeli expansionism and Banker domination.

Putin recently put out an arrest warrant for George Soros for currency manipulation and has issued a decree banning the Rothschild clan from Russia. Russia is also causing problems for the Israelis and the West by defending the regime of Bashar Al Assad from Nusra and Da'esh/ISIS. Israeli expansionism has been kept in check by Russia. China has also more or less wrested free of control from the International Jewish oligarchy.

As a pro-Israeli asset , Trump is not a threat to Israeli expansionism in Gaza and the West Bank. He has even opened up a campaign office in Israel. He is essentially aligning white gentile power with the Israeli-Jewish supremacist camp. He only cares about Israel and will facilitate even worse oppression of Arabs and Muslims not only in Palestine and the rest of the Greater Middle East but in the Western world as well. He consistently repeats the false "Muslim terrorist" narrative. He is even worse than George W. Bush Junior.

As the alternative to the US Dollar, the new BRICS monetary system is also challenging Jewish control of international finance. The heavyweights in the BRICS alliance are Russia and China. There are those who claim that BRICS is also covertly run by the Jewish bankers. I don't buy this. The Chinese are fully aware of the Jewish question. The Russians kicked out Jewish criminals. They won't be able to penetrate the economy as well as they have done in the Western world.

THE DILEMMA OF JEWISH SUPREMACISM

Jewish supremacists view European gentiles as either pawns for their game of global conquest and perpetual warfare or if that is not feasible - their targets of destruction and hatred. Historically speaking, Jews have been expelled over 109 times in history. 105 of these times have been in Europe. That is why left-wing Jewish groups are so vehemently pushing for the replacement and liquidation of indigenous Europeans by either making them a minority or making those countries uninhabitable via the anticipated thermonuclear warfare which they are instigating.

Most White Americans, Australians, Canadians, and New Zealanders are also of European ancestry - and are also targets for destruction/revenge by these Jewish extremists/supremacists for many decades now. The influx of refugees by Jewish groups with the assistance of organized crime gangs is Talmudic vengeance par excellence.

For the Diaspora Jews, its an all-or-nothing zero sum game. They either take their chances with NATO and go all in against China, Iran, Russia, and eventually Turkey or eventually risk losing more countries from their grip and/or control. However, going head on against them will lead to World War Three. Their hatred for white gentiles is so great (due to past perceived historical injustices) that they are willing to risk death themselves in the process of getting others killed. There is no where the so-called (Jewish dominated) elite can really hide or travel to. All their contingency plans are being exposed.

TRUMP IS LESSER OF TWO EVILS

Trump is the lesser of the two evils because he does not appear insane enough to go after China and Russia at the same time. However, I personally prefer NATO going up against China and Russia. The West has been killing defenseless people as target practice alone for the last few centuries alone - they need a challenge this time. Russia along with assistance from China will put them in their place.

The great news is that the Jewish war-mongers have already won! Hillary has already been declared the war president of the United States. I support Hillary Clinton in her desire to go to war against Russia. I have been praying for the day this would happen. In fact, thermonuclear warfare is just right around the corner. Nobody should be complaining about this. Without thermonuclear warfare, there is no way International Jewry's grip on temporal power can be crushed. That is the other reason I left Canada!

I'd like to end this piece by sending out the following Halloween message to everyone: Enjoy the party while it lasts! Make sure you have a blast! Hasta La Vista Baby!!!

Do not see Hildabeast walking into the Whitehouse at this point to only be indicted. A curse has found Hillary in the 2016 presidential race the teflon is wearing thin. Even with Soros controlling 16 states during this election cycle to swing the votes towards Hillary's favor is not going work. This Muslim is not up to date with current events unfolding as of November 1, 2016.

Possible that assistant Attorney General Peter J. Kadzik will take charge of Huma Abedin Emails a friend of John Podesta now what could go wrong here? The October surprise was Weiner-Gate how could this laptop not be bleach bit after everything that happened with server gate. Both Anthony and Huma cost Hillary the Whitehouse.

I find this guy's analysis pretty accurate in most areas. Much more sane picture of the real world than the average American has.

On Trump and Hillary. You asked the other day. I'm in Denmark, and here one is considered a total nut-job for even considering Trump to be the better candidate. Of course, now it might be different with the
new revelations coming out, but I'm thinking that at least there are the intentions of divide and conquer, and sowing confusion. If Europe, or, at least Scandinavia (I'm fairly confident that Hillary is viewed far most favourably in Sweden and Norway too) can be made to view
America as insane for voting in Trump, then "The Western World" will have cracked down the middle, no?.

I recommend the analysis of this man:

I find his views to be very plausible, although I do not agree with everything.

i find it very strange that most non muslims would be comfortable with a person like this Salman Hossein character in the pic, living in their area, building etc instead of a REAL practicing muslim with a REAL beard and flowing robes etc

im trying to find the correct way to describe what i see as something VERY stupid & hypocritical.

non muslims seem scared & apprehensive about a real muslim but they will easily accept an idiot like the one in the pic just bcos he looks & dresses more like them.

yet many non muslims claim to be Christians & claim that they love Jesus so much, they elevated him to the Son of God & then God himself but you will NEVER find Christians who both resemble the one they claim to love the most by adopting his style of dress, appearance, character etc
they not only dont practice themselves but also dont like it when we muslims practice upon this.
it may seem that im drifting away from the topic & my comment is irrelevant but please bare with me.

this Salman Hossein character cant even be a good muslim, what makes people think he can be trusted?

as far as Trump & Hillary is concerned, who cares?
only fools take them seriously.

my opinion: all Americans should just refuse to vote for the simple reason that theres NOBODY running who is worth voting for.