Married to a Mormon Mason 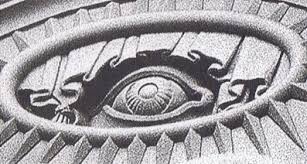 (left, all-seeing eye at Mormon Temple)
A reader, Michael, wrestles
with his wife's
desire that he join
her Mormon faith.
"Had my wife been involved with the church when we met, I doubt we would have married."
by Michael B
(henrymakow.com)
Whereas my wife is very active in the LDS church and temple, I am not. I was raised as a Roman Catholic which turned me off to organized religion at a young age.
My wife on the other hand was LDS. When we met, neither of us attended any kind of religious services. However several years into our marriage, a medical emergency prompted my wife to get back into the LDS faith. Despite my dislike of organized religion, I agreed to attend church with my wife. I have always believed in God and have read the Bible but the hypocrisy of many of the Christian denominations has kept me away.
At first, I liked the friendly family oriented message of the LDS. However, as I read more of their literature I became disenchanted. The LDS people I have met and those I am related to are very good, law abiding people. They work hard and think coffee and tea are drugs. For me the end of my participation in the LDS faith was when my wife wanted to "get sealed" in the LDS temple. She gave me some books to read and I realized that there was another side to the LDS. The LDS temples are not open to all Mormons, let alone the public. To go to the temple you must get a temple recommend card and undergo an interview with the stake president who asks questions about your beliefs, coffee, alcohol, drug usage, and tithing.
After reading about the temple and some of symbols, secret handshakes, the temple garments, I saw the Masonic connection. That should not have been a surprise as the founder of the faith - Joseph Smith and his successor Brigham Young were Masons. 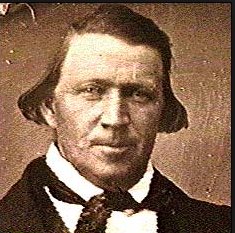 Brigham Young played a huge role in the development of the faith. Not only did he lead the people across the continent to Utah but he essentially ruled the Mormons as their king. One look his face told me he was not a man to be taken lightly but someone to fear. He had the face of a thug or a gangster.
A lot of good information is available on YouTube. I came across a video from NEWNAMENOAH of the LDS temple in Gilbert, AZ.  The video is 21 minutes long and shows the Celestial Room inside the temple. You can also see the strange attire worn inside the temple. Both men and women wear green aprons which are supposed to represent the fig leaves worn by Adam and Eve in the Garden of Eden. This is clearly Masonic.
There is an explanation of the symbols embroidered on the undergarments worn by the priesthood. They are clearly masonic and consist of a square, compass, and ruler. The same symbols are used at Masonic Lodges and by Mason to identify each other. This video demonstrates the various handshake and grips used in the temple. Secret handshakes are common in fraternal orders such as the Masons and college fraternities. Another ritual taken from fraternal orders is the knocks at the door. Years ago I belonged to the B.P.O.E. (Elks) and initiations began with knocks at the meeting room door. The veil is supposed to symbolize the separation between the material life and after life. However when I first viewed it in this video all I could think of was the classic movie - The Wizard of Oz.
This video has close ups of the aprons and the women's head dress, and you can hear the three knocks as they go behind the veil. 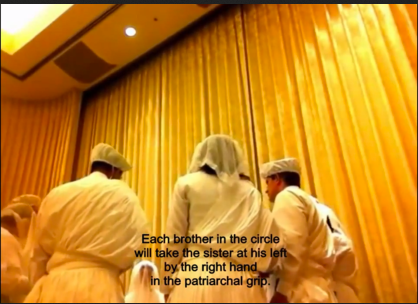 This video is of a prayer circle. Temple goers are given new names to be used in the temple. Those are secret names not to be revealed outside the temple. Temple worthy Mormons are also instructed not to reveal what happens inside the temple. Husbands and wives are not to discuss temple ordinances with each other when not in the temple.
This video shows close ups of the prayer circle and grips. Also you can see the women are required to cover their faces.
This is the washing and anointing ritual.
This is a video of the Baptisms for the Dead. Mormons believe that you must be baptized in water to go to heaven. These baptisms are done by proxy and temple goers provide the physical body so that the dead can be baptized.
MARRIED TO A MORMON
My wife became a Mormon again after we were married. I investigated the faith but rejected it after I saw too many connections to Masonry. Sadly I see it as more of a cult than a faith. Had my wife been involved with the church when we met, I doubt we would have married. She is a good person though and does not drink alcohol or coffee, smoke, or use drugs. The faith seems to help her and give her hope. I think God is understanding and will not punish those make mistakes but are of good character and have good intentions.
As for me, I am disappointed that the Mormon faith like so many others has changed so much of what Christ taught while he was here on earth. Modern Christianity has become a religion about Jesus not the religion he taught. Jesus Christ did not teach in secret. The Sermon on the Mount is one example. He did not restrict anyone from listening to his sermons. All people, men and women were welcome to listen. He was a doer and not just a talker. He washed his disciple's feet to show his humility and to demonstrate how they should treat other people.
After the crucifixion, the early followers of Jesus often met in secret to avoid persecution.
The early leaders made compromises with other religions and pagans to keep the faith from dying and to get new members. What we have today in Christianity is the result of those compromises. The Vatican was built over shrines dedicated to Magna Mater (Great Mother) so it should be no surprise the Virgin Mary is so important in the Roman Catholic faith. This is but one result of the compromises. There are others.
NEWNAMENOAH has his own YouTube channel with 68 videos.  If you have ever wondered what goes on inside those temples, go to YouTube and watch his videos .
----
Related - 1857 Mormon Massacre of Wagon Train
-----------------   Mormonism is Luciferian and Masonic
Michael Hoffman-  Mormons are a Masonic Front
First Comment from Anonymous
I am an ex-mormon. I have been through the temple many times for 30 years. I served 2 years as a missionary.
All of this paranoia and films looking for anything, the tiniest excuse to scream the devils are coming makes these anti-mormons look like buffoons. I have not seen any devils or made any covenants with who knows what. It was all simple and straightforward. It is highly symbolic and most, even high ranking mormons do not understand it all.
It is a false idea that what goes on in the temple cannot be discussed outside, though the vast majority hold it to be so. We covenant only not to reveal the mason-like signs and tokens outside of the temple. I will not reveal these because I made a promise not to do so, Though I'm no longer in favor of the church, I will as a devout Christian keep my promise.
Joseph Smith was a mason and he was murdered by the masons for questioning and changing their rituals in the LDS temple. Joseph claimed that the masonic rituals have been handed down through the millennia have been altered and corrupted.
For many years mormons were prohibited from joining the Masons; however that ban has been lifted a few years ago.
My reason for leaving the mormons are because of some doctrines, official history and the stranglehold the church has on members to not question beyond their limits. If you dare question the official version of things, you will catch hell from the leaders going up the chain to the head honcho himself. We must be honest, but too honest is not advised. Blind obedience is something to be cherished.
People think Mormon teachings are strange, but from a Buddhist, Confucianist or Hindu perspective, general Christianity is quite bizarre. Though I consider myself a strong Christian, I prefer to remain outside of all organized religion from now on.

Comments for "Married to a Mormon Mason"

Michael is correct that Mormonism is a cult. Walter Martin did a scholarly expose of it and many other organizations in his "Kingdom of the Cults." I had a Christian friend whose whole family in Salt Lake city became Christians. She explained to me various Christian terms used by Mormons that have different meanings and significance than traditional Christianity, and that is how cults can be marked. There is always a marked contrast with them and major Biblical based Christian doctrine.

Fritz SpringmeIer, in Bloodlines of the Illuminati shows the relationship of Russell (Jehovah's Witness founder, also a cult) and the Mormon founder. That these two, have such a link to Masonry, under the banner of "the true faith" shows Satan has worked real hard and successfully at duping people. I have heard a recording, via Bob Larson of secret Mormon ceremonial skit that would seem to depict Lucifer as Jesus brother, Light Bearer, in a twisted up is down white is black distortion of the real truth.

Baptizing the dead is pure occultism.

This is the washing and anointing ritual.

This is a video of the Baptisms for the Dead. Mormons believe that you must be baptized in water to go to heaven. These baptisms are done by proxy and temple goers provide the physical body so that the dead can be baptized.

While I have been enlightened by much of what you write, and I thank you for opening my eyes to much of what is really going on around us, I am also a temple attending Mormon. I follow you frequently for this value you bring and the knowledge I have gained. However, your recent post about the Mormon ceremonies being Masonic could not be further from the truth, and is a subject not best presented by someone on the outside who really has no knowledge of the overall purpose behind them.

While there are similarities in ordinances and such, I can assure you that the contrast between the two, Mormons and Masons, could not be more stark than that between day and night. I agree with you about the evil behind the Masonic orders, but I can attest to the very opposite of evil, the epitome of good, which is behind the Mormon temple ordinances, notwithstanding the similarities in rituals and dress. As much as Masonic is controlled by and is inspired by and promotes the powers of darkness, and clearly seeks to subvert and destroy, the Mormon ceremonies are promoted by the powers of light, and inspire to bless and lift up all mankind to their greatest good. As an insider, I can attest to that.