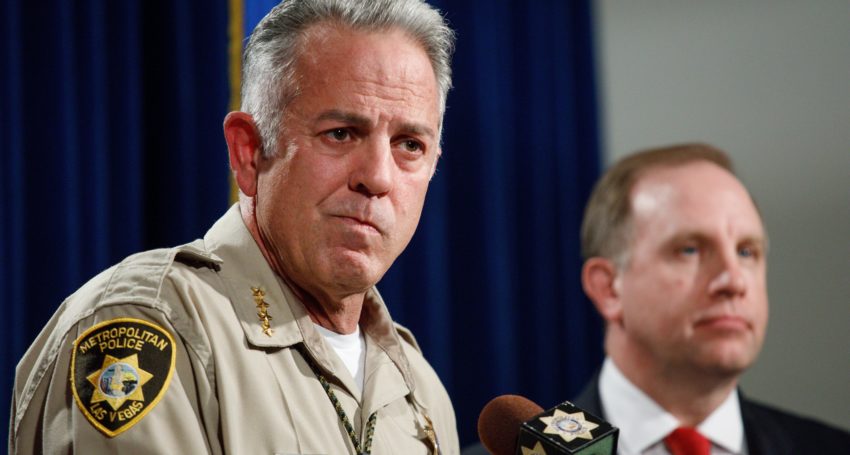 (left, Las Vegas Sherriff Joseph Lombardo under the watchful eye of FBI station chief Aaron Rouse)
According to Yoichi Shimatsu, former editor of Japan Times, elements of the FBI loyal to James Comey carried out the Vegas massacre using ISIS recruits who have been infiltrated into the USA to carry out terror and undermine the Trump administration. This certainly throws the massacre into a fresh light. Remember ISIS, the FBI and CIA are all Zionist/Communist proxies.  I am skeptical about  Shimatsu's contention that Paddock was an FBI agent and ISIS was sending a message to their FBI-CIA sponsors. Indeed, I don't believe ISIS carried out this attack but the idea they are being infiltrated into the US is compelling. This video
shows two men in police vests shooting onto the crowd.
"The mass murders at the Orlando Pulse nightclub and the Route 91 Harvest Festival were the direct result of a political "time bomb" left behind by the pro-Islamist President Barack Obama, who was likely born to a Kenyan Salafist Muslim clan (or sired by American Communist Frank Marshall Davis) and raised by an Indonesian military officer who was involved in planning and arming the jihadist massacres of 2 million non-believers in the 1960s. The Indonesian fanatics are still killing Christians over there, without any objections from the State Department.
Comey remains a watchdog protecting the Islamist campaign to subjugate the USA and sabotage Trump's agenda to revive industry, create jobs and achieve energy independence. Orlando and Vegas are the opening shots in a guerrilla war against the American people. Therefore it is time to read the entire passage from the Second Amendment as ratified by the States and authenticated by Thomas Jefferson: ''A well-regulated militia being necessary to the security of a free state, the right of the people to keep and bear arms shall not be infringed."
Now that we know the FBI and CIA have turned coat and joined the invasion force, it's become high time to set up a militia for defense of democracy and sovereignty."
Friends Of Jihad In CIA-FBI Intimidate Vegas Victims
By Yoichi Shimatsu
Exclusive to Rense
10-15-17
After sustaining injuries from gunfire, the Las Vegas victims are being threatened into silence by a rogue FBI, which remains fixated on overthrowing a duly-elected President on behalf of their Saudi, Kuwaiti and Qatari paymasters. Any attempt by local police at an investigation into the multiple-gunman shooting spree is being thwarted by federal henchmen, who are allied with the Obama appointed former FBI director James Comey. What's now happening in Vegas is not just a heavy-handed cover-up of a heinous crime against the public, it's the continuation of a war against patriotic Americans by the Salafist Muslim sponsors of terrorism, who are now increasingly focused on regime change in Washington D.C. 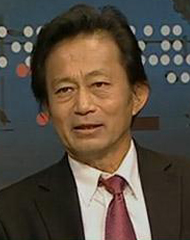 Las Vegas was a mixed event per Robert David Steele. Yes people died, and yes there were crisis actors. Intel ops involve layers. Players don't know the full truth any more than us. It's both/and, not either/or.

Ken Adachi needs to cool off. He has truther disorder: all who disagree are disinfo. Spare me. Yoichi Shimatsu travels worldwide with detectors. Ken hasn't left his bedroom. Ken levels the same idiotic accusations on Leuren Moret PhD over measurable rads. OK, Ken, you don't believe instruments, you think sailors reporting a dead ocean are shills. Fine, keep yourself happy posting on space aliens among us, orgone, sylphs, crystal power, and other mystical nonsense.

Yoichi Shimatsu fails to see the drills and actors, but Ole Dammegard sees them fit the usual template. I disagree with Shimatsu about ISIS revenge. I think people truly died, BUT NOT PADDOCK which may be an alias. ISIS would hit Langley for revenge, not country western fans. The foreign threat in America isn't ISIS (useful idiots and Mossad/CIA fakes by and large) but actual Russian troops, Gurkas, and other foreign mercs for the planned NWO takedown of America when SHTF. Eyewitness reports cover many states. They are here with permission of Uncle Sam, on bases and in National Forests.

If you want ZOG disinfo try Greg Palast, an otherwise OK guy who loses the plot on all things Israel. He is blood-related to Mossad and possibly Sanayim himself. I heard not a peep from Greg on dual citizen Chertoff son of a Mossad agent running DHS. Greg's now buttressing the party line on crazy lone nut Paddock with whom he had school. I'm sorry, Greg, but not even Ahhnold in a cornball action blockbuster could manhandle the guns claimed. The whole event fits the ZOG-NWO agenda for gun bans, police state, and islamophobia. Paddock was pawned off as a convert. I wonder if his gambling was halal.

So now ISIS is in the US heartland as well as all over the middle east except
Israel. hmmm

It is true as Glen says that there is so much BS, and this Kaos is what they specialize in (ultimately falling victim to their own devices).

Rense has presented that one video that did it for me as far as real deaths in Vegas goes.

The dead woman turned upfaced reminded me of the 1970's tv series Holocaust and it's gore. I cannot put much faith in witnesses as there are too many actors. Again, they want us divided. If we get too cynical then they can roll out the stormtroopers to haul us to Fema camps and we will say it's just acting and nothing to worry about. Goebell's increasingly adopted Churchillian propaganda techniques (didn't graduate at Tavistock?).

As for Fukushima, background radiation here on the east coast of Australia has hiked up 27% over pre fukushima, up from around 5-15%. Whilst that could be solar I doubt it. Readers might like to look at Dana Durnford and Kevin Blanch on youtube and particularly the death of the Pacific that they show directly. There is a reason why the Japanese have put millions of tonne bags of Fuku province topsoil into temporary, inevitable failing, storage. To say no effect is misleading. Show me the current miscarriage and abortion rates of Japan please.

Jim Stone's Fukushima Sabotage report at 82.221.129.208 shows who dun it. Rense @ Co are in denial about that even though other guests have hinted at artificial quakes and tsunamis (including Yochi on the Rense.com show), to be characteristically and suspiciously cut off.

Seems like honesty and kindness are 'not of this world'.

Despite video evidence of dead and injured people during the Las Vegas Hegelian dialectic event, many of your readers casually ignore it because it doesn't fit in with their "no one died" narrative. The best they can come up with is, "someone told me" this or "I suspect that", while failing to realize that people can actually die during these staged events. Are we to suddenly believe that the builders of the New World Order all have consciences and would never kill anyone to achieve their goals? When we ignore evidence and throw the baby out with the bathwater, it makes it very easy for those in power to dismiss us as nuts.

His disgusting behavior has been known for decades but it's conveniently all just coming out right now - right on the heels of the Vegas terrorist attack.

I believe his exposure and take-down has been brought out now to steer the masses away from the Vegas inconsistencies and keep them focused on salacious celebrity scandal.

Good to see your commentors recognizing that this whole Vegas incident is just as fake as the rest of them.

The best video I saw from the scene was twenty minutes non stop. The guy was at first just standing, the camera recording the people WALKING away from the place. There were NO LOCKED GATES. In fact, I wondered if the people had to pay to be there as it appeared that everything was wide open. Someone had said the gunfire was on the sound equipment, that someone had taken it over and NO BULLETS WERE HITTING THE GROUND. He was obviously right about the sound as the camera kept picking up the same round of gun fire between lulls of quiet at regular intervals. It was a looped tape or whatever electronic gadget does that now. There was no panic in the people walking toward their cars. But they knew the show was over. Were probably unhappy about the abrupt ending of it.

A local person I know mentioned to me from his personal experience that all the gambling hotels in Vegas have discrete cameras in every room, that there is no way anyone could have gotten an arsenal into a room without being spotted. And didn't the "security guard" who was "shot in the leg" swiftly run away when he was supposed to be interviewed but panicked? Fast healer, I suppose.

Ken Adachi is the voice of reason if you ask me. I still doubt that there were any victims in this charade. Why should we believe that there were? Every false opposition figure seems to be on the 'false flag' bandwagon.
To Hell with that, it was a total Hoax.

They take greater pleasure in mocking us with these circuses and solidify their control over us all the more every time they fool the people with one of these mind f*cks.

I've yet to hear one figure in the 'truth' movement question the repercussions on society when they believe these lies. It totally turns reality on its head. If you believe this lie is real, and live like it you are lost and live in a real matrix false reality. You are in the magician's hands as he hypnotizes you.

From Orlando to the Paris nightclub, to Boston, to Sandy Hook - why should we believe these liars ever again?
In my opinion, no one died and we are all being played a bunch of poor actors as usual. Can you imagine the laughter of our masters when they put out these horrible actors and people are fooled by them? It must be a running joke for them.

It's a sin to be fooled by these liars, it really is. We are blessed with a natural intuition, and unless you are totally hypnotized by these Cabalists you should be able to instantly perceive the bull behind all of this.

This is all the sorcery of psychological manipulation, and people are consenting to it for some reason. A hypnotist has no power over you, until you consent.
A free mind is something going extinct today...

There is so much bullshit and dis-info being thrown at this "staged event" that no one has any clue about the truth. My feeling is that is also by design. Lies, lies, and more lies, designed to keep us all on edge and infighting with each other.

A couple of facts continue to be overlooked by most.
1) There is not one frame of closed circuit T.V. or hotel security camera footage to be found anywhere.
2) I have seen no footage(even crappy cell phone video)of any "dead person" who shows any wound that would be consistent with an AR or AK round.

Blame whomever you like, but until Trump or anyone else in any position of government power comes clean on this and admits this a staged event they are ALL guilty, guilty, guilty of a crime just as the ones who pulled off the event. In my opinion, the cover-up is as bad as the crime itself.