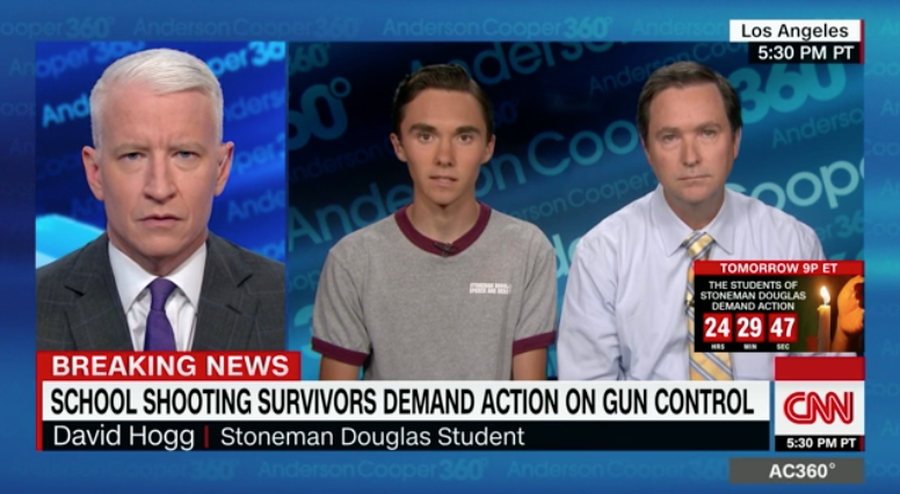 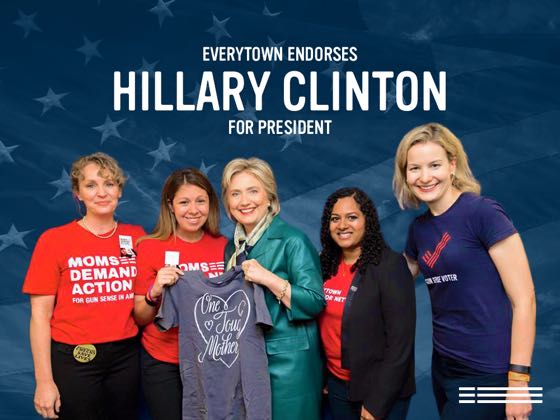 MADE IN ISRAEL
Further verifying a Zionist role in the Parkland School commando strike (see Parts 1, 2 and   3 of this series), two of the Everytown advisers are linked with the special-weapons program of the Israeli Defense Force (IDF): Eli Broad, founder of his namesake institute involved in biowarfare research on Ebola in West Africa; and Qualcomm boss Irwin Jacobs who funds Technion, the Israeli Institute of Technology, which created and developed the IDF cyber-warfare program.
As discussed below, the IDF Cyberwar Command is yet another Israeli component involved in the Parkland false-flag operation, specifically responsible for jamming the Broward County police radio and hijacking Parkland school's video-monitoring security system with insertion of fake video-clips, similar to the video-capture methods shown in the casino robbery in "Ocean's Eleven" starring George Clooney and Brad Pitt. The role of Kevin Ralph Hogg in the electronic warfare operation against the police-rescue team is also exposed here.
Other Obama-Clinton cronies on the Everytown board include Tom Barrett, the Milwaukee mayor who played a key role in advocating the 2008 bailout for Wall Street; and Philadelphia Mayor Michael Nutter, founder of the Philly Rising militant group with funds from George Soros in alliance with Black Lives Matter...
In a tribute to Israeli electronics genius, allow me to repeat a quote from an IDF Cyber-Command officer reported by the Arutz Sheva 7 newspaper, in its Feb. 23, 2016, edition: "We are ahead of the rest of the world in digital capabilities by at least 15 years. We've integrated operational Internet capabilities which enable any commander to do anything in any place." Anything anywhere and any time includes a commando strike against Parkland school on St. Valentine's day.
THE HOGG'S ROLE
The electronic warfare used for the exfiltration phase of Operation Parkland had to be precisely coordinated with the movements of three assailants, and their forward observer, who must have used a different frequency with communications to their headquarters. Not surprising, the former Navy flyer aboard a carrier, Kevin Ralph Hogg is employed at Cubic Simulations Systems in nearby Pompano Beach, which develops programs and graphics for military training and operations. Under DOD contracts, Cubic divides its various ops-planning sections into different regions of the country. 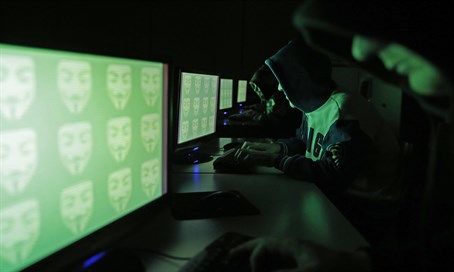 Cubic's Pompano staff, where the father of Parkland student David Hogg works, focuses on joint-services commando operations such a hostage rescue or strikes on terrorist homes, using cyber tech developed by the IDF cyberwar division. For example, this is DOD procurement order for the Cubic regional office in Orlando: Cubic Simulation Systems Inc., Orlando, Fla., is being awarded a $19,930,555 modification (P00002), to a previously award firm-fixed-price, foreign-military-sales (FMS) contract (W900KK-13-C-0010), for the procurement of Israeli Defense Forces Engagement Skills Trainer 2000 Plus Systems and related services.
Therefore, the obvious conclusion is that: Far from being a victim, David Hogg was one of the forward observers of the joint Israeli-CIA death squad sent to Parkland, ensuring that sufficient numbers of his classmates were killed. The faker should be arrested and put under extreme interrogation, along with his father, to confess to their assigned roles in the Soros-style psyop called March for Our Lives. Both father and son suffer degenerative nerve disorders associated with electromagnetic warfare, so never think there isn't divine justice.
The grandfather of David Hogg was an FBI agent who became CEO of Mastercard but was later forced out of the company by the board of directors under a cloud of suspicion, related to his authorization of illegal diversions to a powerful cabal, possibly the same secret society behind the FBI Russiagate affair. Of course, the Hogg clandestine role is all in keeping with the eye in the pyramid of the Federal Reserve Bank, just like former FBI boss Robert Mueller, a grandmaster of that subversion (Alexander) Hamiltonian secret society.
GOFAKEME
GoFundMe pages, most of them posted by fraudsters, are proliferating like pythons in the Everglades. The Miami Herald had to kill its appeals due to the uncertainty of the identities of actual recipients. There were so many fake "victims" that the GoFundMe site decided to limit the fundraising to Broward Education Foundation. Not before pages had been set up by families of 22 shooting victims (Yes, I am aware there were only 17 dead, but some of these are for the wounded, although not all the wounded).
Maybe I've suffered from excessive depression at the loss of family members and best friends, so I've never set up a lemonade stand at a funeral. By the way, if anyone who is considering an online appeal, the State of Florida covers the cost of the victim's funerals, therefore the dozens of claimants asking for funds to bury dead students are either totally uninformed or fake. See you at the trial, and I sure do hope Judge Judy hangs you.
THE KASKY'S LITTLE COFFINS 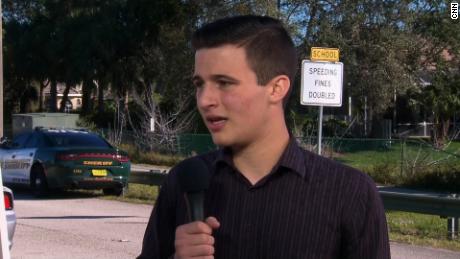 (CAMERON KASKY, ANOTHER JEWISH TRAITOR)
The bodies weren't even cold yet before high-school junior Cameron Kasky posted his plea for donations to support the partisan Democrat protest planned for March 24 aka March for Our Lives. This nasty drama student was the one who dissed Sen. Marco Rubio for showing up at a town hall meeting to show his sympathy and hear community opinion. Young Cameron showed zero intention to persuade Rubio but spoke out only to polarize the distraught crowd. I do not appreciate Rubio's voting record either, but the week of mourning is not the time to play politics. Now that it's started, Cameron is getting what's coming to him.
The art of hustle runs in the Kaskowitz family bloodstream. On the issue of children's welfare, it should be noted that Cameron's grandfather and his father Jeffrey A. Kasky, Jr. are attorneys who serve as president and vice president of the profit-making surrogacy program called One World Adoptions. The OWA slogan for impoverished young women of child-bearing age is: "Make a Pregnancy Statement." That's a new brand of feminism.
THE LONG-PLANNED FALSE FLAG
The rapidity of political polarization out of Marjorie Stoneman Douglas high school during the mourning period, along with the immediate claim from the sneaks at the Anti-Defamation League about the Jewish-born suspect Nikolas Cruz belonging to a white supremacist group, indicate that the Parkland school shooting was another long-planned false-flag attack, similar to the 2012 Sandy Hook elementary school assault in Newtown, Connecticut.
The pieces of the jigsaw are by now, more or less, in place following this fourth part of the investigative series. I hope a fifth is not required unless it's single malt.

In the Bad Old Days of Yesteryear, we had to deal with the Italian-based Mafia. At least we knew who the enemy was and how to avoid or defend ourselves against it.

In today's F-U World, the entire scene is a huge collection of mostly super secret crappy agents that no one person or agency could put up a defense against -- call it a regional conflict zone based on the Global Model for the Communist total takeover.

So now the security cameras can be "seized" and fake pics throw the sheriff and his deputies off track preventing their ability to identify the criminals. This is warfare of a different order - digital warfare. The usual process of detective work must be updated with new tools to overcome the current criminality.

perhaps you noticed this bit of trivia ... up your alley = from farther down in part 2 of
Florida School Attack Exposes Pedophile Jewish Vigilantes By Yoichi Shimatsu Exclusive to Rense 2-19-18
Yiddiots are Yiddish Idiots

Never mind the Holocaust sob story, here is a diamond-hard fact. In 1938, New York Mayor Fiorello La Guardia appointed Shomrin boss Max Finkelstein to provide bodyguards for visiting Nazi officials and protect the consulate of Hitler-run Germany. So my American Jewish friends, it’s high time to wake up to what these pedophile thugs have really been about, as Roger Stone put it so nicely. No yiddiot or shiksa (immodest women) liberal whining over gun control should be tolerated from the likes of DWS, not when it’s your children who are in constant danger of molestation and rape, or a school shooting, by the fetlocked creeps next door.

A game-changing move has taken place here in the last few days. Surprisingly, the corporate sector has now joined forces against the NRA by publically abandoning their support such as selected banks, airlines, and a growing number of companies who now find the NRA an unpopular liability. Without an effective commercial lobby on Capitol Hill the NRA will lose a lot of its political clout.

The beer drinking, cigarette smoking, and gun-owning American Patriot is slowly becoming an isolated remnant. And, once he fades away the Constitutional Democracy that once existed in America will be gone with it.
If everything in this article is true then somebody definitely went to a lot of trouble to start another movement against another traditional American institution.

Sadly, it doesn't take a lot to dupe the American public today. All this murder and mayhem is really unnecessary.
Like 911, innocent American lives should never be sacrificed to start any more wars or political movements.