WE ARE DEALING WITH A GROUP THAT IS DELUSIONAL AND IT'S CONTAGIOUS I.E. FAKE NEWS & FALSE FLAGS.
Watch this 2-minute trailer for a new documentary "What's With the Jews?"
It says Jews view themselves as a tiny minority who were persecuted throughout history because they were smarter than everyone else.  Literally, they say they're hated because they show how great human beings could be and remind the goyim of their own failure.
Expelled from 109 countries all because of envy. (Some say 359 times)
Could there be another reason for anti-Semitism?
For instance, the Talmud and Kabbalah regard non-Jews as animals (see excerpt at the bottom.) The film repeatedly cites Jewish Messianism where Jews will "heal the world" and usher in a utopia. They will do this by destroying every Gentile social unit -- family, nation, race, and religion. These are the current goals of globalism, Communism and the NWO evidenced in migration, multiculturalism, gender dysphoria, political correctness, gun grab, censorship and the loss of free speech.
The Jewish World of Feb 9, 1883, defines this Jewish Messianism:
"The dispersion of the Jews has rendered them a cosmopolitan people. They are the only cosmopolitan people and in this capacity must act and are acting, as a solvent of national and racial differences. The great Ideal of Judaism is ...that the whole world shall be imbued with Jewish teachings, and that in a Universal Brotherhood of Nations - a greater Judaism, in fact -- all the separate races and religions shall disappear.
"As a cosmopolitan people, Jews have passed the stage that the national form of separatism represents in social life. They have made the whole world their home. By their activities in literature and science, by their dominant position in all branches of public activity, they are gradually molding gentile thinking and systems into Jewish molds."
Organized Jewry is also a solvent of family and morality. Multiculturalism, miscegenation, homosexuality and feminism are not about "tolerance and human rights." They are about shredding the social fabric, dissolving European Christian culture and civilization.  Might any of this cause anti-Semitism?
In my website article, Destructive Cabala Doctrine Dooms Humanity, I detail why Judaism defined by Talmud and Cabala is satanic. The goal, close to fruition, is for the Cabalist central bankers to displace God and turn morality upside down. This is the real meaning of "the Chosen People." Organized Jewry believes it is God. I suspect the NWO will institutionalize this.
Cabalist Judaism is all about inverting good and evil, and as long as Jews and their Masonic minions represent their collective enterprise as good, evil will reign. Liberation for Jews (and for humanity) is in Jews recognizing that Jewish Messianism (globalism/Communism) is satanic, and starting afresh. Humility is a good thing.
The following introduction to the documentary demonstrates the extent of the self-delusion. Yes, many Jews are smart but much of their success is because they are accomplices, with Freemasonry, in the world central banking scam which controls all government credit and consequently all financial, political, social and cultural institutions.
"Their contribution to humanity is enormous, unique and exceedingly difficult to explain. From Moses to Maimonides, to Mahler, Marx, Freud, Einstein and some 197 Nobel Prize laureates, the stunning social, scientific and artistic accomplishments of the Jews raise an obvious question. How do they do it? 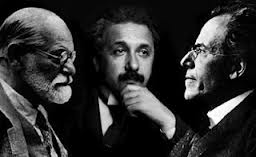 The story of huge overrepresentation at the top is the same wherever you look. How does 1/500th of the world's population produce so many prominent musicians, architects, lawyers, doctors, journalists, comedians, and directors? A third of the medical faculty at Harvard is Jewish, as are nearly  40 percent of history's world chess champions.
In 1954, New York State school tests revealed 28 students with IQs over 170. Astonishingly, 24 of them were Jewish.
"The numbers are bizarre. They make no sense at all," says Montreal rabbi Reuben Poupko. For Harvard professor Steven Pinker "Jewish achievement is obvious; only the explanation is unclear."
Calling Jewish success "colossal" and "extraordinary," renowned British evolutionary biologist Richard Dawkins recently speculated that "something about the cultural tradition of Jews is way, way more sympathetic to science and learning and intellectual pursuits."
Recent writings focus on wildly speculative hypotheses. Some suggest that Jews have been winnowed for success by pogrom and Holocaust. Others posit that Jews developed their minds in challenging professions after abandoning agriculture in the first Millenium. Still, others see a link between Ashkenazi genetic disorders and high intelligence. 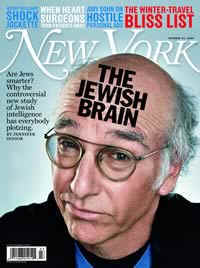 Jewish genius remains a giant elephant in the room, today. "Jewish intellectual superiority is rarely if ever discussed in Jewish publications," writes author Lewis Regenstein. "To some, these facts are awkward and even embarrassing, feeding stereotypes of 'crafty' Jews good at making money and flaunting their superiority to non-Jews.
"A good reason not to make the film? Perhaps. But we take the bolder approach of Prof. Pinker who noted recently: 'In every age, taboo questions raise our blood pressure and threaten moral panic. But we cannot be afraid to answer them.'"
----------------------------------------------
Related - Is Asberger's Uniquely Jewish?
-----------------God's Chosen People are the Smartest Race  (YouTube)
--------------------------------------David Duke - Jews Discriminate Against Goyim at Harvard
First Comment by Marcos-
Those people follow the Kabbalah, which is basically racist gnosticism/Luciferianism.
Men as gods, self as the ultimate idol, boundless greed and ruthless fight for power.
If you follow that philosophy, you would brainwash your kids in a brutal discipline of study in yeshivas and Bar Mitzvah preparatory classes and limit contact with outside people and cultures. Create a group mindset, an esprit de corps. Finance scholarships. Build special schools. Trim off anything kind, open and generous that could distract them from the focus on success.
As anyone with some life experience or any avid reader of biographies can tell, Jews help each other opening doors and giving to each other opportunities not available to others.
It is possible that IQ among Ashkenazi Jews (who are actually unmixed European whites) may be a bit slightly superior to gentiles', but probably inferior to Japanese and Chinese Asians. But we are not talking about averages here, what counts is the support to the best. Jewish accomplishment was negligible before the XX century when their support structure was finally in place.
Gentiles, and especially Christians, have to suffer the handicap of their own doctrine. Humility, compassion, loving the neighbor, all these traits mean letting opportunities pass and making choices that don't mean money or recognition. The Western ethics about individual effort also make it shameful to receive undeserved opportunities. It's considered cheating.
I'm reminded of an article about Mensa people working as truck drivers. The situation would be much different if those people had the same support and encouragement young yeshiva boys receive to succeed. But would it be profitable to win the world and lose their souls in the process?
The Kabbalah is one of Judaism's holiest texts.

They would on average fail abysmally on an emotional intelligence test which beyond a certain level of IQ is more germane to the survival of the planet. (the Blade Runner test).

If we had another major ice age, which Western man survived by huddling together and being conservative and forward-looking (to the short warm season) then I wonder how these middle east types (oriental they used to call them) would fare.

Gilad Atzmon reckons they got some smarts (and some dumbs) by marrying the smart rabbis son to the merchants daughter.

It's a welfare system they have benefited from amongst themselves (as have freemasons) long before this modern welfare state. (and it's nemesis , cruel exploitation of their lesser brethren).

The greatest Jewish genius ever? Try reading this one to deflate that myth.

know one Authentic Jewish genius who will not be included in this upcoming documentary, The great and courageous Bobby Fischer.

Israelis as a whole have a pretty ordinary official IQ, but as far as I'm concerned that's neither here nor there, since I treat collective racial IQ scores with the same level of trust I I give to msm accounts of "chemical attacks".

It beats me how folk (e.g. white nationalists) who exhibit extreme scepticism about other establishment narratives treat collective IQ ratings as the equivalent of holy writ. Such stats often make zero sense when analyzed. For example, European Mediterranean countries like Spain and Italy have significantly higher official IQs than Arab and north African countries; yet the Latin countries also beat European countries such as Serbia and Croatia - nations which share much less genetic heritage with Arabs and North Africans than Spaniards and Italians do.

There are only a few real explanations for these anomalies: (1) the tests themselves are intrinsically flawed (2) the tests are often improperly conducted or the collective results are fraudulently compiled and collated - e.g. for reasons of national or ethnic prestige, etc. (3) race is not the real determining factor in IQ at all.

After reading this latest article that you sent, these two articles came to mind. They represent what many Bible believing Christians believe about Israel and the Jews.

If the Jews want to make a Jewish supremacy video FINE....

But when a group of Germans did the same type of thing (a group that 100 years ago had the most bragging rights on the planet) you get this: "Judea declares war on Germany" (Daily Express 1933), and they then manipulated their stupid shabbos goy into murdering 10 million Germans....(it's continuing today...Germany is now a vassal state of israel)...

The reason why jews have high admissions to Ivy League schools is because these once "goyim" institutions have been
completely taken over by Jews and obviously favor their own and discriminate against Whites and Asians in admissions....

Chess? Yes, it's possible that 40 percent of the best chess players are Jewish...But why? Most young Jews do not gravitate towards athletics so they instead pursue another extracurricular activity that doesn't take a lot of physical effort.

Jeez, Henry, you really leveled the playing field on that one. Kind of called them out. Hard for others to rise if they keep getting shoved out of the way.

Read your article on â€œwhatâ€™s with the Jews. Aside from the things you pointed out, one of the things that struck me as I scanned through the movie was the number of Jews who have been lauded as Geniusâ€™s or great contributors that were in fact charlatans, cheats, or just plain overrated.

Iâ€™m sure you are quite aware of this yourself. There is no question that as a group Jews are intelligent, but I question how much of this genius is real or just a con job and PR, and just how much more superlative Jews are when compared with Asians or Caucasians. You have exposed Freud. Christopher Byerknes has exposed Einsteinâ€™s plagiarism, and there is plenty out there now about what a monster Jonas Salk was and the true failure and hype of the polio vaccine. https://www.naturalnews.com/031564_Jonas_Salk_medical_experiments.html

How many of these other prominent Jews got where they were on genuine merit as opposed to tribal loyalties or fraud? I donâ€™tâ€™ have the answer to that, but I suspect it is a contributor to this story of supposed prominence because of brilliance.