Chuck Baldwin: Israel Has Been a Disaster for Mankind 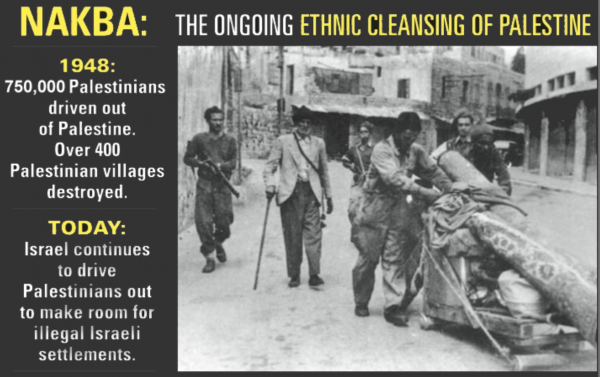 Almost everything about Organized Jewry is a fraud.
Start with the Talmud, the original tirade of hate against the goyim. Move on to the Cabala where they claim to be God. Next, their banking system which charges our government for the use of its own credit.  Add their fraudulent claim to the state of Israel. (The Khazars bought the "Jewish" franchise in the Eighth Century.)
What the Khazars did to the Palestinians, they are doing to the whole world. Isn't the USSR proof? Libya? Iraq? Syria?   Iran? (coming) 9-11?  The murder of JFK? Mass shootings and false flag terror? Feminism? Homosexuality? Migration? Multiculturalism? WW1 and II? Cold War. etc.
However, they couldn't do it without first installing a colonial class of traitorous goy Freemason  flunkees, our cultural and political  "leaders."
Ordinary Jews were conned into establishing Israel by Zionists who helped bring Hitler to power. The inverse of Israel's independence is the Palestinian "Nakba" or "catastrophe." I support the two-state solution but Zionism isn't about sharing.  It's about world conquest. And the average Jew was not consulted. Israel is the major cause of anti-Semitism today.
Below Pastor Chuck Baldwin explains why he isn't celebrating Israel's "independence."
Seventy Years Of Turmoil, Treachery, Death, And Destruction
by Chuck Baldwin
(henrymakow.com)
Today, May 14, 2018, marks the 70th anniversary of the creation of the Zionist State of Israel. Most Americans--and especially most Christians--labor under the delusion that the modern State of Israel is a fulfillment of a Biblical prophecy of ancient Jews returning to their homeland. Nothing could be further from the truth.
The creation of the Zionist State of Israel has brought turmoil, treachery, death, and destruction that is almost unequaled in modern history. The Rothschild conspiracy to create its own Zionist state has its tentacles in both world wars and in virtually every significant act of war afterward.
I distinctly remember several of my theology professors in college (two different colleges, in fact) telling us ministerial students that "World War I prepared the land for the Jews, and World War II prepared the Jews for the land." And this was stated as if two world wars was a GOOD thing.
One cannot even be true to history and ignore the fact that the Bolshevik Revolution that brought Marxist/Leninist/Stalinist communism to power in Russia was almost exclusively the handiwork of Rothschild's Zionists. For all intents and purposes, communism and Zionism are one. They always have been and always will be.
Christians need to come to grips with this painful truth: It took the deaths of over 115 million people to bring the Zionist State of Israel into existence. (This is "of God"?) And the Zionist state has caused the deaths of millions more since becoming a nation-state, as almost every war that America has fought since 1948 has been on behalf of Rothschild's Israel, and America's so-called war on terror is almost exclusively waged on behalf of the Zionist state.
And as an aside, Trump's decision to withdraw from the Iranian treaty on Tuesday of this week is nothing but political smoke and mirrors. The only reason the U.S. government entered the agreement with Iran in the first place was that it fully expected Iran would break the treaty, thereby giving Israel and the U.S. an excuse to attack the economically rich (and Rothschild bank-free) country. However, since Iran KEPT the treaty (Netanyahu's baseless accusations to the contrary), Trump had to pull out of the agreement so as to find another justification for attacking Iran.
The advent of the Zionist State of Israel in 1948 has created more turmoil, confusion, division, bitterness, contention, and downright hatred and bloodlust among Christian people than anything in 2,000 years of Church history. It has also created more political turmoil, war deaths, and destruction than anything in 2,000 years of Western Civilization.
And lest someone attempts to label me as being "anti-Semitic," let me remind them that there are tens of thousands of Jewish rabbis and Jewish people who are as adamantly opposed to the apartheid Zionist State of Israel as anyone. These same Jewish rabbis actively work for the "speedy and peaceful dismantlement of the State of Israel" (their words, not mine).
Sorry, today May 14, I won't be celebrating.
Related-  The Dark Side of Israeli Independence
------------By their own admission, Jews want to control all belief

Comments for "Chuck Baldwin: Israel Has Been a Disaster for Mankind"

God explained perfectly how Israel should treat the Palestinians. Don't blame God for what comes from Israel's rebellion:

The foreigner residing among you must be treated as your native-born. Love them as yourself, for you were foreigners in Egypt. I am the LORD your God. (Leviticus 19:34)

Deuteronomy 10:19 Love you therefore the stranger: for you were strangers in the land of Egypt.