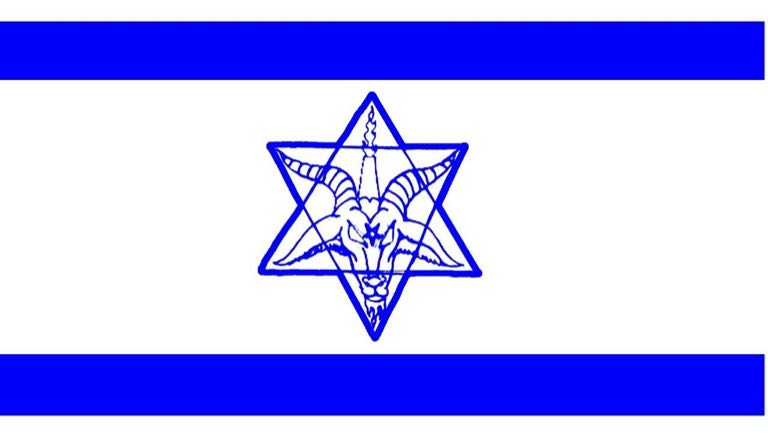 (left, the six-pointed star of Satan  Leese explains the symbolism.)

THE GREAT JEWISH MASQUE is a 55-page booklet published in the 1930's by Arnold Leese (1878-1956) which purports to reveal the real history of the Jews. A veterinary surgeon, Leese was a British Nazi (remember Hitler was TIME 'Man of the Year' in 1938) who believed

Organized Jewry is perpetrating a fraud on humanity.  Judaism is not a religion because Jews are their own God. They are not "God's Chosen People" and have no historical claim to Palestine. Most Jews do not understand that Organized Jewry places them in jeopardy, in opposition to humanity as a whole. Look at the role of Organized Jewry in starting wars like the one beginning in the Middle East. (See Cabalist Dogma Dooms Humanity)

Leese was imprisoned for three years during WW2 without charge or trial for opposing the war which he regarded as purely Jewish in origin and purpose.
None of this globalist agenda could be achieved without the complicity of goy Freemasons who have sold out their countrymen. They are our political leaders but you never hear about their Masonic connection. Meanwhile, people like me are able to rail on about the Jews. As the West slowly subsides into a Third World shithole, uninitiated Jews will take the heat for the satanic Jewish leadership and their Masonic flunkies.

Remember the following was written over 80 years ago.

Part I is here

The Great Jewish Masque or The Ass in Lion's Skin

[World domination and enslavement under auspices of Communism] is the end towards which the activities of all who participate in the Masque, whether Jews or their dupes are directed.

And, in modern times, the "six points" of the star formed by the interlaced triangles, have been made to symbolize, among many other ideas, the principal means whereby this end is to be reached. 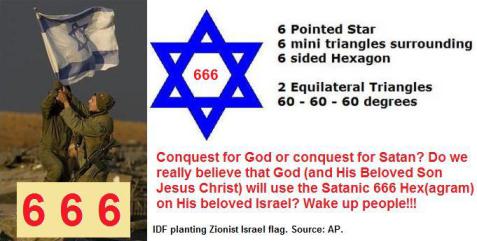 These "six points" may be outlined, roughly, as follows:

1) Religious: to undermine and discredit all Gentile, and especially all Christian creeds; and to introduce, encourage, and propagate crazy cults, unhealthy mysticism, pseudo-science, and sham philosophies.

2) Ethical: to introduce and propagate debasing codes and practices (including "the illicit drug trade," "the illicit liquor trade, " and "the white-slave traffic") ; to corrupt morals, weaken the marriage-bond, destroy family-life, and abolish inheritance (and even heritable names) among all other peoples, especially among the Northern races.

3) Aesthetic: to introduce and foster the cult of the ugly and the aberrant, and whatever is decadent, debasing, and degenerate in Art, Literature, Music, and the Theatre, etc.

4) Sociological: to break up large estates, and abolish aristocracy; to set up plutocracy and a "money standard"; to encourage vulgar display, extravagance, and corruption, to provoke the proletariat to envy, discontent, incendiarism, "sabotage," and to foment "class-warfare."

5) Industrial and Financial: to bring about "unemployment" and want, to lower ideals of craftsmanship and abolish pride in handicraft, to encourage greed for "profit," and the standardization of the cheap and shoddy; to bring about "Centralization," and the formation of Trusts and Cartels; to abolish private ownership and to establish "State monopolies," "Reserve Banks," and a "World Bank," .... with the control of gold in the hands of the International Directors.

6) Political: To secure control of the Press, Broadcasting, Cinema, Stage, and all means of publicity; to secure the presence of "agents" on all Gentile councils, committees, etc., and in confidential posts (such as "private secretary" to highly-placed persons), to maintain an effective espionage upon all Gentile activities; to start and keep alive dissensions in all Gentile institutions, and thus break up all other political groups in their component parts, and set these at enmity with each other; to discourage, decry, and extirpate Patriotism and Pride of Race; and, in the name of "Progress" and "Evolution," and under pretence of promoting "Universal Peace" and "Human Brotherhood," to set up "Internationalism" as an ideal, thus undermining na- tional unity and weakening government; to bring about "Disarmament" and the establishment of an "International Police Force," controlled by a " 'League of Nations". . . thus preparing the way for those who, unobtrusively, will gain control of the "League of Nations" and the "International Bank," and through these, rule the world.

The International Directors, however, never act openly or directly; they always keep in the background and work secretly and indirectly; pressure is brought to bear from all points, but whence it comes is carefully concealed .... "no Gentile must be allowed to discover its source."

Thus it is evident that however ridiculous the mongrel Judaean ass may appear in the royal skin of the Babylonian lion, his ludicrous posturings and ungainly capers must be viewed with suspicion.

His dubious antecedents include vile strains from the "Bolshevik" followers of the Ass of Typhon, from the outcasts who worshipped the Swine of the Satanic Set, from the run-a-gate refugee rabble of Jerusalem, and from the lawless and predatory banditti of Palestine.

Conceived in dishonor, he was born in inglorious captivity, schooled in the dark practices of savage cults (such as those of Saturn, of the gloomy Israel, of the disreputable Tsabaoth, and of Asthoreth), and reared amid scenes of perfidy, turbulence, and anarchy.

Flattered by lying tales of a "wonderful past", and deluded by borrowed prophecies and plagiarised promises of a "still more glorious future", he is consumed with lust for "World domination". And under the lion's skin, wears hatred as a garment and nurses a sinister purpose. 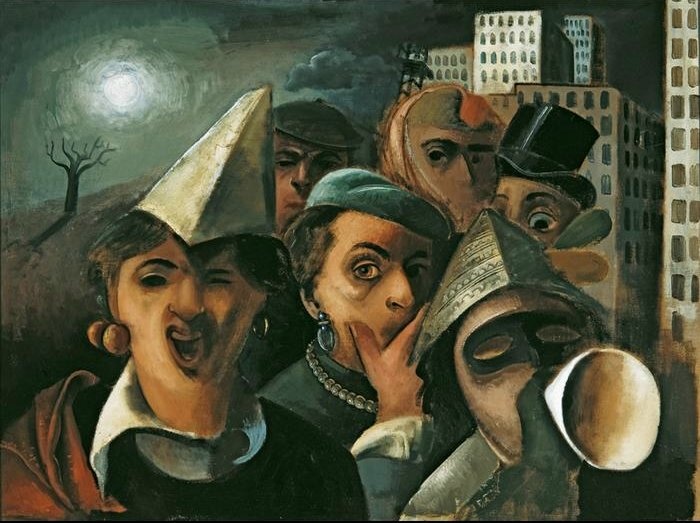 The impersonation has continued so long and has proven so advantageous, that its perpetuation, at any cost, has become the dominant idea which obsesses his vain, selfish mind.

Devoid of scruples, and realizing his inability to fight his way openly to leadership, he is determined, with all the stubbornness of which his obstinate nature is capable, to reach his end by cunning, by duplicity, by any means however ignoble .... even if these entail the destruction of all who are nobler than he, and the degradation of the rest to a position lower than even his own.... so that at last, he may "reign" unassailed, in "Universal Peace", over such dregs of the once human race as may still remain to soil the desecrated ruins of a besmirched and polluted world.

In every country, subversive, disruptive, and disintegrating forces of every kind, are to be encouraged and organized by professional propagandists and trained organizers; who, after the manner of all revolutionaries, will "invent fictitious rights, thus creating imaginary wrongs; exploit real grievances, and create want, thus producing discontent and an atmosphere of revolt; and then blame the existing social and industrial systems and point to the Red Road of Revolution as the only way of escape". 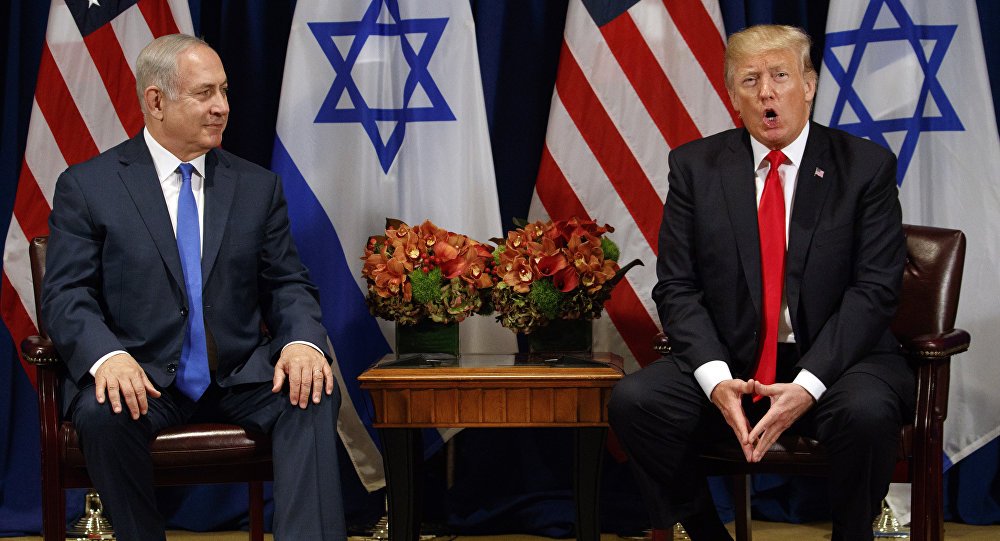 When the "aristocracy" and "bourgeoisie" of all Gentile peoples have been "removed", and all non-Jewish institutions have been discredited and trampled under foot by a systematically bestialized and scientifically depraved "Proletariat", the International Directors hope that their Jewish mummers, under cover of great secrecy, and protected by armies of agents- provocateur and a vast network of secret police, will be able to continue their soul-destroying Masque in the character of a "Wealth-controlling World-dominating Ruling Race."