The "Hate" Emanates from the Left 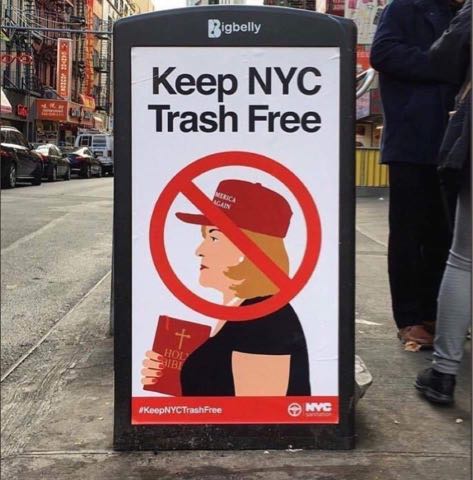 (left, Leftists have put up these hateful fake NY Sanitation Dept. posters. Trump supporter holding a Bible is deemed "trash.")
When I tweeted this picture with the message that the "hate" emanates from the Left, two of my readers sent this caution.
@krm30586725
20m20 minutes ago
More
Replying to @HenryMakow
Don't get caught up in the good cop bad cop thing - PLEASE.....
and
@msmoorad
32m32 minutes ago
More
Replying to @HenryMakow
Henry..i can't believe u would post something as stupid as this..we know there's no Democrats or republicans..its all the same bcos the same Zionist parasites control both sides.
While the Left-Right conflict may be a charade, there is a real difference on the ground. If Trump had not been elected, we would have had five Jewish (Liberal) Supreme Court Justices. The attack on gender and family would have been championed by the government. 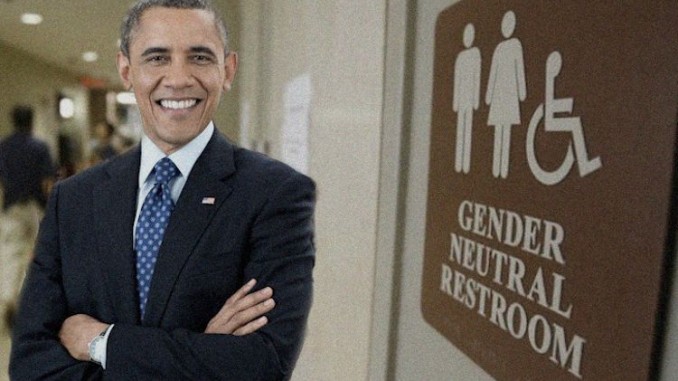 We would have had genderless bathrooms in all stores and schools. Sex ed (grooming children for pedophiles) in all the schools. Migration would have increased.
The caravan now approaching the US border would have been welcomed. Free speech and censorship would have been even more onerous than now.
Do you really think there is no difference between Trump and Hillary?
It's true that both globalists (Left) and nationalists (Right) represent Communist and Zionist branches of Freemasonry. The fact they are controlled by the Rothschilds at the top doesn't vitiate the fact that nationalism is preferable to globalism. The globalists were looting the US economically and scientifically in favor of China. They wanted the US to be subsumed by globalist bodies. Under Trump, this was stopped.
HATRED BY THE LEFT IS OK
The artwork was reportedly done by street artist Winston Tseng and began showing up on trash cans where a public service announcement would normally be.
One shows a man wearing a "Make America Great Again" hat with a Confederate flag tattoo on his arm and a Chick-fil-A cup in his hand. 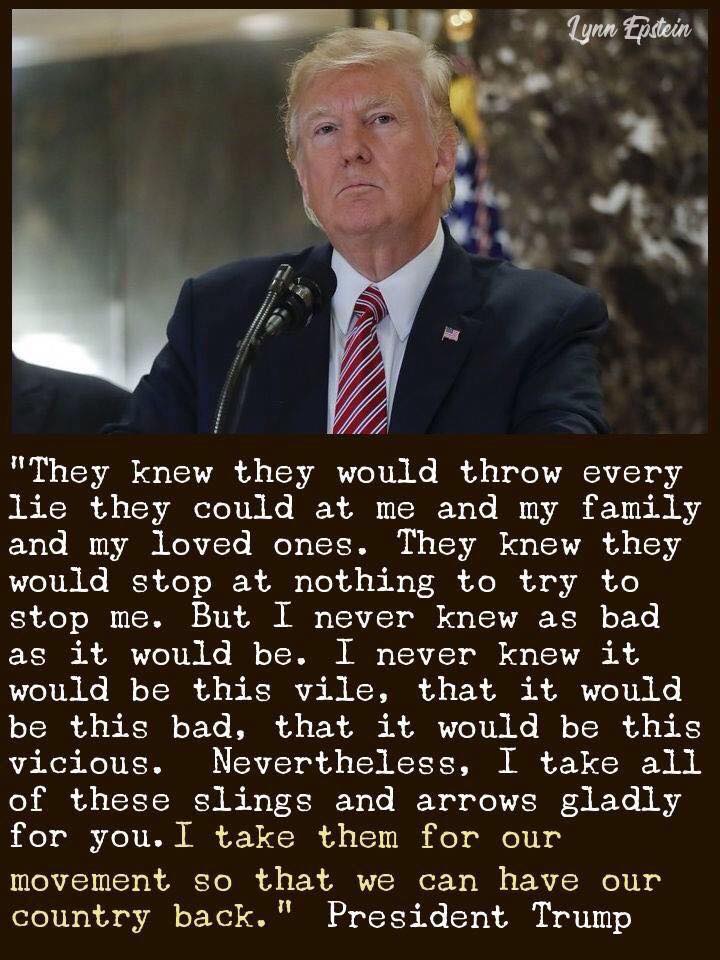 Both posters have a line through the head of the Trump supporters. They are called "trash," echoing Hillary's deplorables. The woman is carrying a Bible. The hate emanates from the Left.
Like Judaism, Communism is a satanic cult originating in Jewish Cabalism and the Talmud. The Left has been inducted into that cult. They behave like cult members, demonizing and intimidating all who challenge them.
Trump represents a Zionist faction that seized power by resisting this globalist onslaught.
If the Right put up posters like this, they would be removed immediately. There is definitely a double standard. The media conducts the most vicious relentless attacks on Trump, yet blame him for creating an atmosphere of hate. This is classic Communism-blame your target for what you are doing.
This is not a mere difference of opinion. Communist Jews have been undermining Christian Western civilization from the beginning. The crucifixion of Christ should have been a clue.  Antisemitism is merely a response to this vicious satanic attack. Kevin McDonald has shown how they have waged a deliberate war on Christian culture  using movies, TV and music.
This is not a matter of "the same people control both sides." This is not about valid competing points of view. This is resistance to a satanic attack on civilization.
Trump may be leading us to world war. But if he doesn't, he is the lesser of two evils. There is a difference.
------
Related - What is Communism?
New First Comment from JJ
What the left does not understand is this, that to the people on the right the most important thing is behavior. The right wants people to work at making an honest living and taking care of one's family. After that you can think whatever you want. The left wants to control thought and behavior totally and when they can't they get nasty. A right-winged dictator does away with socialism and makes everyone take care of themselves not caring about thought. A left-winged dictator wants TOTAL control of every aspect of one's life and also WORSHIP.
Mike Stone (who is an American) writes:
Anyone who tells you there is no difference between the Republican and Democrat parties is misinformed. There are huge differences, particularly on the local level.
Most, but not all, Republicans are pro-life and support the Constitution, including the 2nd Amendment. Almost all Democrats are pro-abortion and want to dismantle the Constitution and the 2nd Amendment.
Most Republicans are against open borders. Most Democrats support open borders.
Most Republicans want to cut taxes and cut down on food stamps, welfare and government handouts. Democrats want the government to hand out free stuff to all of their voters.
Most Republicans support free speech. Most Democrats want free speech censored.
Most Republicans are civil and open to debate. Most Democrats are uncivil in their behavior and want to shut down all debate that goes against their agenda.
Most Republicans favor treating all races equally. Most Democrats are anti-white and support privileged treatment for their non-white voters.
I could go on and on, but you get the idea. There are HUGE differences between the two parties.

Comments for "The "Hate" Emanates from the Left "

Republicans and Democrats have been in bed together for some time and while on the grass-roots, ground level there may be differences between the "republicans" and "democrats," both parties, much like the "secret society organizations" have been subverted.

It occurs to me that while the Republicans publicly denounce open borders at the same time supporting big business and big business is about big profits and big profits means as little costs as possible and labor has always been the biggest cost of doing business, what better way to cut labor costs than by importing "undocumented workers who do not receive the protections under the law?"

This has been going on in this country since the days of the "robber barons" and world wide since, well, commerce was initiated.

What you get before you is a choreographed dance of words and rhetoric; each side condemning their own actions through blame that the other side is engaging in those actions.

So the Democratic party blames the Republicans for racism when the Democrats consistently use race to foment opposition against the Republicans; Democrats blame "big business" for the "wealth gap" thus initiate taxes to compensate, but that only results in higher prices for goods and services by those same Big Businesses to compensate for the losses while both parties hold stock in those same Big Businesses, thus profit no matter the outcome, and creates the notion of the "big, bad monsters" that are the Republicans and the loser in all of this is ALWAYS the people as each party takes turns sucking the life.

Maybe it is high time we adopt something new by appropriating from Richard Pryor and vote "None of the Above" ... In fact, that should be the Third Party in America: None of the Above.

“But know this, that in the last days a critical times hard to deal with will be here. For men will be lovers of themselves, lovers of money, boastful, haughty, blasphemers, disobedient to parents, unthankful, disloyal, having no natural affection, not open to any agreement, slanderers, without self-control, fierce, without love of goodness, betrayers, headstrong, puffed up with pride, lovers of pleasures rather than lovers of God, having an appearance of godliness but proving false to its power; and from these turn away.”

The left-right paradigm is false, we know this; however, it is impossible to ignore how openly evil the Left has become. These people hate anything that is good because they are evil, they mock anything that is wholesome because they are broken, they destroy any attempt to stop their onslaught on culture and downward progressive fall, because they are damned and on their way to Hell. They are a cruel hypocritical people who rally against crimes of a political nature that offends them, but justify the abject slaughter of millions of children every year in the wombs of their mothers. The type of people who constantly praise the medical establishment for giving longevity to their depraved lives, but are eager to see that same establishment wipe away old filth through euthanasia because they use up funds that are of course – meant to be allocated mainly for themselves.

But the above accusation would only be met with abject mockery by a true leftist, because a true leftist is also a true nihilist who believes in nothing while the system they have created demands only scientific observations as arguments – moral absolutes need not apply.

The type of creature that over a hundred years of Marxist and Darwinist thought has produced. These moral relativists who are of an artificial unhealthy mind are finishing up an artificial, unhealthy and unnatural system where they can thrive for the next million years while the rest of us will have to grievously suffer before dying off, along with our God.

Satan’s absolute rule will not be realized until the last Christian is corrupted and dies.

These moral relativists are the worst of humanity ever seen. A people who have no God other than themselves are determining the course of our future. To understand what a moral relativist really is, these are the cowards who would debate whether or not the rape of a woman was permissible given the circumstances – maybe she was a bigoted Trump supporter, now receiving her just due by a gang of blacks.

This isn’t an exaggerated example, these people will justify anything that satisfies their hatred and cruelty.