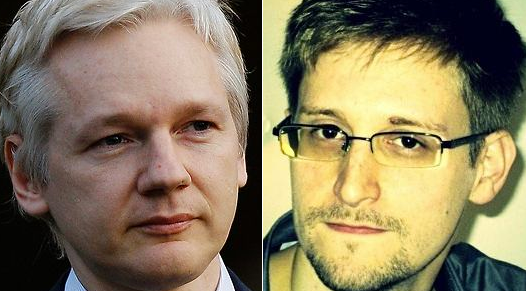 The jury was out but our correspondent has rendered
a verdict. Both Assange and Snowden are Deep State.
If their acceptance of 9-11 wasn't enough, Brabantian
faults them for keeping Robert Mueller's dirty secrets.
by Brabantian
(henrymakow.com)
It is quite easy to establish that both Julian Assange and Edward Snowden are CIA fakes created during the arrogant Obama years.
For one thing, Assange was admitted to be an intel fake by no less than Benjamin Netanyahu himself, and also by Zbigniew Brzezinski.
Netanyahu admitted this when responding off the cuff as to why he was not worried about 'Wikileaks' damaging Israel. Zbig made clear the leaks were 'selected' and highly limited. Some of them are done to make Assange look 'legit'.
From Ian Greenhalgh: Â« If Wikileaks were a real organisation carrying out real leaks that do real damage to real people and even nations, then those charged with protecting those people and nations, such as the FBI, would surely be kicking down doors and making arrests and extradition requests in order to reign them in and prevent further damage in future. The FBI is not looking for any Wikileaks people. No-one is hunting them, or cutting off their money, or even restricting their travel, or accusing them of anything ... Without the protection of the FBI and other Israeli assets in the US, then Wikileaks could not operate nor could it survive very long. Â»
https://www.veteranstoday.com/2016/12/30/a-storm-is-coming/
At least two people who contacted Assange have turned up dead - Seth Rich & Peter W Smith. Assange pretends to be 'concerned' about the former; he denies receiving the latter's files. Others are jailed. Assange and Snowden are 'rat traps', vehicles to destroy real whistle-blowers who are duped into contacting their CIA-goon media pumpers, NY Times, UK Guardian, Rothschild's Greenwald, etc. We don't know how many may have been quietly killed after contacting them.
European officials understand that Assange is not really 'living' at the Ecuador embassy in London. The UK police 'watch' the place so MI5-MI6 can move him in and out for his meetings and photo opportunities.
Regarding Snowden, the report to SVR - FSB on why Snowden is a fake, is very thorough ... Putin plays along on a 'deal' as he plays along on 9-11, Snowden is perhaps not even in Russia ... Excerpts of the SVR report can be found here at Veterans Today.
For example, Snowden first 'leaked' to Bart Gellman, Dick Cheney's friend and biographer at the CIA's Washington Post, ha!
Glenn Greenwald is not only a gay ex-pornographer (same previous profession as his friend Jimmy Wales of the CIA-Mossad Wikipedia), Greenwald has worked in turn for 3 billionaire families - Bill Gates, the Rothschilds, and now CIA-project-funder Pierre Omidyar.
The biggest "tell" is that both men support the 9-11 official story. Here is Assange.     Here is Snowden.  They give credibility to the 9-11 false flag. Another "tell" is they never criticize Israel, the real perp.
ROBERT MEULLER'S CRIMINALITY
Another proof that Assange are Snowden are fakes, is how neither says a word regarding the devastating files on USA Virginia federal judge bribery - the very same judges who would allegedly put Assange & Snowden on trial if they were real. Covering up for USA judge bribery & corruption is a key CIA agenda item ... Any real US dissident overseas would be glad to speak about it.
Those files are already blocking a series of USA extradition requests for other people ... yet Assange & Snowden say nothing. If Assange or Snowden were real and 'concerned about being extradited to the USA', this is the first thing they would be talking about, as it would make their extraditions impossible. 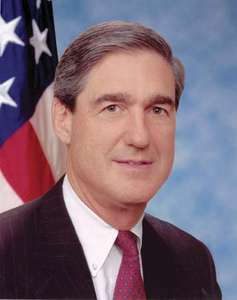 (left, corrupt cop?)
The story of the bribery of USA federal judges in Virginia was just recounted in a USA government document, the explosive filing with US Department of Justice Inspector General Michael Horowitz, made a few days ago on 25 October 2018, describing the role of Robert Mueller in bribing those judges when he was FBI Director.
The DOJ report speaks of how Mueller had received funds from a foreign criminal group seeking to damage the US presidency, in a scheme involving defrauding millions from a Hillary friend and donor via Mueller's law firm, from which Mueller richly profited, whilst two federal judges were bribed.
And that key media agitating against US President Trump - NY Times, UK Guardian, CNN etc - are doing so, in part because these media outlets fear felony indictment in the schemes with Mueller, due to having taken bribes to create 'fake news' for criminal purposes as they worked with Mueller's law firm. - Same media who pumped Assange & Snowden, of course. - You perhaps noticed the US President's increased confidence re the 'Mueller threat'. Here's the report of the bombshell DOJ report online -
---
Makow comment- If Assange were CIA, he would not have released the information on Hillary Clinton. Just
yesterday, we heard Assange worked for the Russians.  Could a reader shine more light on these men?
Brabantian replies: Many Trump supporters were enthused by the Wikileaks against Hillary Clinton, which like a lot of Assange / Snowden material are just more detail on things people already write about. At the same time, Assange was also visibly involved in an attempt to entrap the US President's son Donald Trump, Jr.
Assange & Wikileaks recommended that young Trump violate the US federal CFAA law, the Computer Fraud and Abuse Act, which makes it a crime to attempt to log-in to a website using a stolen or guessed password. Assange thus 'set up' young Trump for a fall.
There were two major reasons for US intel operative Assange, to dish dirt on Hillary. One is that this re-establishes some 'credibility' for the Assange hoax. Similarly, Assange and Snowden have both been stung by criticisms that they shield major crimes involving Israel, and in response, they both have done some minor not-too-big needling of Israel, e.g., Israel helping create spyware etc., which of course is well-known.
A second reason though is that the Powers That Be have found they need blackmail material on every President. Of the 10 USA Presidents previous to Trump, 4 have been 'hit', 2 shot - JFK, and Reagan, the latter shot and wounded by a young man whose father was working for George Bush's brother; and the two staged 'impeachments' of Richard Nixon & Bill Clinton.
Despite all the Clinton corruption, Bill Clinton had balked at the war crime of bombing Serbia and killing thousands, he didn't want to do it. Enter two Jewish figures, Monica Lewinsky and Matt Drudge. A large scandal was fabricated, Clinton was impeached and then 'acquitted', Clinton began bombing Serbia a few weeks later.
The Wikileaks postings against Hillary, were similar 'insurance' for the USA Deep State, which could be trotted out against USA President Hillary Clinton if she didn't behave. A perhaps surprise for the Deep State, however, was that despite their best Soros-funded efforts, Donald Trump won.
---
Related- Russians say both Assange and Snowden are CIA Frauds
----------- Robert Muller is a Swamp Critter
Webster Tarpley -Snowden, CIA Shill? How to identify CIA limited hangout op?
First Comment by Tony B
Sounds like a mix.
Greenwald; faggots used to be easy blackmail material but today they seem to be mainstream.  Does that mean blackmail no longer works with them?  I'm not sure.
This writer uses Netanyahu, Brzezinski, Veterans Today (Gordon Duff, long time CIA) and the DOJ as references??????  Not any steady credibility there in my book.
When I put myself in the position of Snowden or Assange one of my first thoughts is that I would not be talking to or about any U.S., or any other western judge, who might have power over me in future, either.  They are practically all masons and almost positively all crooks of some kind or other.  Plus, I imagine the two men are very careful about what they say and to whom.
Mostly what I got out of the article is that someone wants those two men politically poisoned, no matter what their true status.

Regarding Seth Rich, why would Assange do anything other than make his somewhat oblique statements about the man, when Wikileaksâ€™ policy is to protect sources. On the other hand, he outright "denies receiving [Peter w. Smith's] files" . . . . which also does not violate this policy.

Additionally, Wikileaks has offered a $20,000 reward for any "information leading to a conviction for the murder of DNC staffer Seth". (See: Seth Rich WikiLeaks Claim: Julian Assange Comments on Rich ).

This does not sound like â€œpretend[ing] to be concerned aboutâ€ Rich Seth.

Then you have the testimony of Craig Murray, a former UK ambassador to Uzbekistan and â€œa close associate of Wikileaks founder Julian Assangeâ€ (see: Former UK Ambassador Says Source Of Clinton Emails Was "Disgusted" Democratic Whistleblower --- https://www.zerohedge.com/news/2016-12-14/former-uk-ambassador-says-source-clinton-emails-was-disgusted-democratic-whistleblow). He has averred that he flew to DC to receive a handoff of the leaked emails from an intermediary who had received them from a DNC insider having â€˜legalâ€™ access to the emails . . . . . and further, that the emails were NOT hacked by the Russians or anyone else. And the emails were not only highly damaging to Hillary but to the DNC and Podesta, in particular.

Murrayâ€™s testimony seems to be largely ignored by any discussion of the â€˜purloinedâ€™ DNC emails.

And itâ€™s rather a stretch for the writer to seemingly consider Benjamin Netanyahu and Zbigniew Brzezinski as unbiased, untainted sources.

Snowden/Assange opinions about 9/11?? Why should they be expected to have valid opinions in this arena, when they probably havenâ€™t made a real study of the issues, including the science for the use of â€˜explosivesâ€™ in the demolition of the 3 WTC buildings, etc.? Besides, they have to preserve their own focus w/out being sidetracked or lumped into, or being marginalized by, identifying w/the 9/11 â€˜truthâ€™ efforts.

And to accuse Assange and Snowden as â€œvehicles to destroy real whistle-blowersâ€ is a real stretch. Who on earth would regard the NY Times or the UK Guardian, etc., as safe places to out this kind of information? Whistleblowing is a risky business, regardless of where it is revealed.

But I canâ€™t fault much of the rest of Brabantianâ€™s assertions, especially regarding Mueller and the alleged criminality of Federal judges in Virginia.

A couple of things to remember about whistleblowers are:

1) Whistleblowers more than often end up dead or imprisoned.

2) Whistleblowers are ignored or scorned until they become too dangerous to those they are exposing. At this point, they will end up in the first category.

Both of these gentlemen are alive and well. Although they are said to be more or less political prisoners, neither one is serving time in prison and are very much alive. I find this suspect and reason enough to side with Barbantian on this one.

They were both wrong. Just ask yourself this: What good does it do to implement a total surveillance matrix, to terrorize the citizenry into compliance, if the citizenry doesn't know about it?

I don't have any info on Assange's and Snowden's CIA or NSA ties. But I encourage anyone interested to watch the film "Citizenfour" which was recorded in real time while Snowden was 'hiding out' in Hong Kong. The fact that an entire film crew was entering and leaving Snowden's hotel room day after day makes it laughable that US intelligence was alledly unable to locate him. It is obvious from the film that no amount of Chinese government interference could have shielded Snowden; the least amount of American surveillance would have picked up the activity around and in his hotel. And Greenwald (sp?) was also conspicuously on the scene.

I live in Hong Kong and know the area well. To my mind this has all the earmarks of a limited hang-out. The most surprising element to me is that the filmmakers could release "Citizenfour" and not realise they were shooting themselves in the foot.

Keep up the good work!