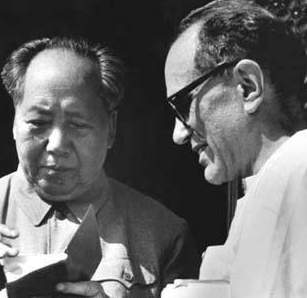 (Left, Mao with his handler Sydney Rittenberg)
Brabantian asks how real are
the conflicts between Russia and
NATO, and China and the USA.
He explores what the "nationalist"
model of the NWO might look like.
by Brabantian
(henrymakow.com)
How 'real' is the 'big power conflict' today or in the past?
Is a great deal of the big-power conflict staged, as Antony Sutton said regarding the USA-USSR 'Cold War'?  With Israel helping transfer US tech to Russia during the old Soviet days?
Jews and China have a long history, with Jews quite heavily involved in Mao's revolution from the early days, some Jews from Europe even becoming members of China's ruling politburo - some fascinating photos and discussion of that here: 'The Secret Role of Jews in China'
The above web page describes how Jewish figures were close aides to Mao even before he took power.

(Commie Jews mentioned below are seen in meeting with Mao)
Polish-born Jew Israel Epstein became Mao's powerful Minister of Appropriations handling key financial matters, & knew later Chinese leaders up through Hu Jintao. Sidney Shapiro, a politburo member, and 'Chen Bidi', Sidney Rittenberg, Virginius Frank Coe, Rewi Alley also served Mao closely despite being of non-Asian, Jewish origin.
The truth may be slightly complex, as with Russia. The Chabad loop includes 'Putin's Rabbi' Berel Lazar, with a quick hotline to Jared Kushner's rabbi in Washington. Yet despite all of Putin's Chabad and Israeli connections, Jewish neo-cons are constantly attacking Russia.
Possibly indeed the big powers are all in collusion on one level, for an ultimate NWO end game ... but on another level there is a jockeying for position, e.g., Vladimir Putin does not like the way that he and Russia are demeaned and slandered. Yet Putin and Russian major media seem to 'pull their punches' and hold back, rather than fully expose the worst of the Western crimes.
Makow has described the Jewish-Freemason rivalry between globalist and nationalist camps. Netanyahu (nationalist) is defending Hungary's OrbÃ¡n for his strong stance against George Soros (globalist), sabotaging the Soros camp claim that OrbÃ¡n is 'anti-Semitic'.
It tends to be assumed that the NWO model is one world government under the United Nations or similar -But the 'nationalists' have an alternative NWO model to offer against this 'globalist' model, based on 1930s Europe, multiple co-ordinating fascist-tending governments, which the nationalists can argue is much better suited to human tribal psychology 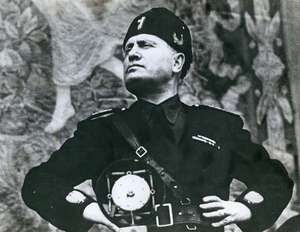 If one abstracts from Hitler occupying Prague in March 1939 and starting the war, one sees a Europe functioning rather effectively with a large group of openly-fascist or rough-nationalist governments, not just the famous Mussolini in Italy, Hitler in Germany, Franco in Spain, but also Pilsudski and then Rydz-ÅšmigÅ‚y in Poland, Horthy in Hungary etc ... Europe might have continued in this way for quite a long time if the manipulated war hadn't intervened
It is possible that after the experience of the last few years, with the 'globalist' and 'EU' models crashing and burning in terms of popular support ... the nationalist model will be more promoted ... an NWO arriving via local 'populist victories', under leaders all friendly with each other and with the Netanyahu camp in Israel
The late Barry Chamish described how the prosecutions of leading Israeli figures was nearly always politically-motivated along various fault lines ... perhaps Netanyahu's current legal troubles, can be seen in light of this globalist-nationalist struggle within Israel itself.
CHINA 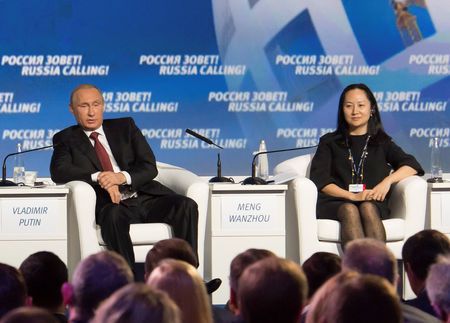 (Russia's President Vladimir Putin (L) and Meng Wanzhou, CFO of the Chinese technology giant Huawei, attend a forum in Moscow, Russia October 2)
Getting back to China, one can see the Meng arrest and the neo-con thrust against China, as similar to the Western attacks on Russia ... which yet don't prevent some deeper co-operation on some levels. It could well be that the NWO goal is shared, but the various national groups - like rival football clubs in the same high-school - still want to jockey for position on a medium level of things.
The Chabad website lists 11 Chabad centres in China:
Beijing China, Chabad-Lubavitch Rabbi Shimon Freundlich, Director
Shanghai China, Chabad-Lubavitch Rabbi Shalom Greenberg, Director
Chengdu Sichuan China
Hong Kong Discovery Bay China
Hong Kong Centre China
Guangzhou China
Kowloon China
Ningbo China
Shenzhen Guangdong China
Shenzhen Nanshan China
Yiwu Zhejiang China
China obviously knows who and what Chabad is, and how it works as an international intelligence network. It seems likely that by this point, Sheldon Adelson has become a part of whatever discussions are taking place behind the scenes.
Some even suggest that the brutal Meng arrest, was secretly co-sponsored by China ... along with Russia perhaps co-sponsoring some of the actions against wealthy Russians in Britain ... a warning to 'stay connected to home, as there's no safety for you and your money abroad'
Another motive would be that, given the global economic crash that might be coming, from the world's 250 trillion in debt that can't be paid, finally blowing up the system, including giving China a rough patch ... it is in the interest of governments to have more conflict and reasons for 'patriotism', as problems with 'evil foreigners' will be a good distraction from economic hard times.
Brandon Smith and others, have long run the theme that to set up the NWO, it is the USA that will play the role of the ugly, brutal, hated bad guy - hence coarse acts like asking for the arrest of Ms Meng.
Barry Chamish even suggested that another take-down in the end, would be Israel itself, with a leveraging of global anti-Jewish feeling as a prop to support the NWO.
As this site often suggests, key NWO-cabal players are often playing both sides or multiple sides ... on both sides of 'left vs right', on both sides of 'globalists vs nationalists', and possibly also on both sides of 'USA-5 Eyes-Nato' vs 'Russia-China etc'.
Yet amidst this playing both sides, there are yet somewhat 'real' conflicts on a medium level, where we can still distinguish right from wrong, and something more positive vs something more negative. The arrest of Ms Meng was one of those shocking things with perhaps bigger consequences than the neo-cons who arranged it, had anticipated.

I read somewhere that THE SILVERMASTER SPY RING escaped to (RED) CHINA and became their foreign service. I've seen pictures on Internet of CHINESE JEWISH PRESIDIUM MEMBERS. The Chinese revolution in 1913 SUn-YATSEN et al. was Masonic just like the YOUNG TURKS were both Masonic and JEWISH(see"TWO-GUN" COHEN from British Columbia in RICHARD DEACON'S books). Chang Kai-shek and Chou-en-lai (descendant of CHOU faamily) were both Masons too. John Gunther in "Inside Asia" hints that one prominent Chinese ("red-haired") "WAR-LORD" was a crypto-Jew. Gunther seems to point out Jewish-Masonic influences in his "Inside" books wherever he goes(now deceased). He correctly points out-for instance-Chili's Pinochet and Allende as being both Masons....one Grand orient and the other, Grand Lodge(so-called "Conservative")

I read somewhere that THE SILVERMASTER SPY RING escaped to (RED) CHINA and became their foreign service. I've seen pictures on Internet of CHINESE JEWISH PRESIDIUM MEMBERS. The Chinese revolution in 1913 SUn-YATSEN et al. was Masonic just like the YOUNG TURKS were both Masonic and JEWISH(see"TWO-GUN" COHEN from British Columbia in RICHARD DEACON'S books). Chang Kai-shek and Chou-en-lai (descendant of CHOU faamily) were both Masons too. John Gunther in "Inside Asia" hints that one prominent Chinese ("red-haired") "WAR-LORD" was a crypto-Jew. Gunther seems to point out Jewish-Masonic influences in his "Inside" books wherever he goes(now deceased). He correctly points out-for instance-Chili's Pinochet and Allende as being both Masons....one Grand orient and the other, Grand Lodge(so-called "Conservative")

Meng Wanzhou obviously has the means to procure the best legal representation available. One wonders when extradition from Canada to the US is going to be contested on the basis of the incompatibility of the justice systems in the two countries--e.g., the relatively massive incarceration rates in the US, their farming imprisonment out to private companies, their unconscionable use of plea bargaining, etc. If these issues were seriously raised in court, the Canadian position in this controversy would be even worse than it already is.

"Do illuminati jews control etc "
another superb article
my belief is that the jews who took Russia in 1917
coveted the wealth of the west, Rothschild himself said
"communism it the road which we walk to take the world"
The jews owned the USA and UK, so although on the outside bitter enemies
as soon a s hitler took the economy away from the jew bankers and gave the prosperity to the people
the illusion of the war between Russia and the USA and UK was dropped
Suddenly Stalin was no longer a murderous bastard but good ole uncle jo.
The Grand chess board its called by henry Kissinger, the jewish bankers play off one country against another
but hitler taking over the economy for the people meant they had to be destroyed at all cost. the danger was other countries would follow suit
But not everyone was fooled the greatest General the allies had was Gen. Patton, and he said " we slaughtered the wrong pig"
and Eisenhower had him murdered for it

As far as America goes the neocons and the globalist democrats are both at odds with President Trump.
The Soros Democrats are blocking the funding for a border wall with Mexico because they want America to be an Open Border NWO State.

President Trump is a supporter of Netanyahu and Israel but under his terms and not the terms of the Israeli neocons in Washington. He does not want to escalate the wars in the Middle East and he is seeking a peace agreement with the Palestinians.

For this reason you are witnessing a daily assault by the MSM and independent judiciary groups on the Office of The American Presidency. They are frustrated because all this harassment has been unsuccessful in moving President Trump to their political positions.