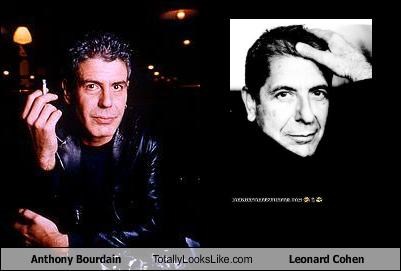 Ann Diamond hung out with Leonard Cohen
and penned articles
about his Illuminati connections.
He never mentioned a son but
the resemblance is uncanny.
by Ann Diamond
(henrymakow.com)
Anthony Bourdain, who died last year, has been called the "Leonard Cohen of Food." 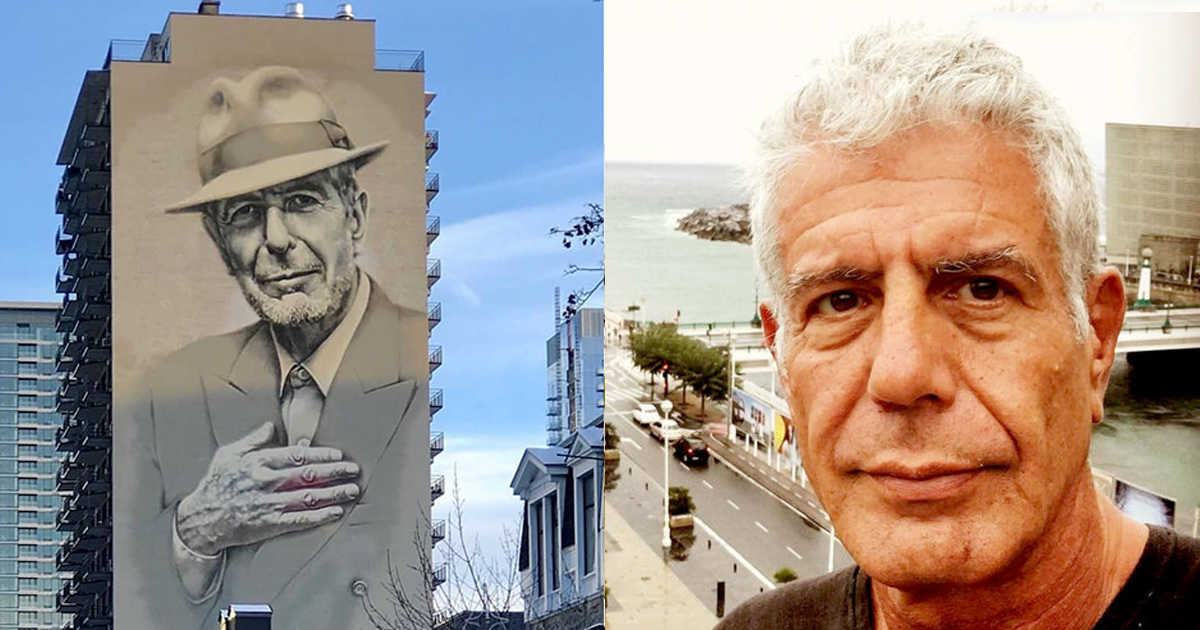 (Cohen mural doesn't bother to hide hand)
There's an obvious physical resemblance. In fact, tourists to Montreal have mistaken the giant Leonard Cohen mural on a downtown street for a mysterious tribute to Bourdain.
Bourdain looked more like Cohen than he resembled his father Pierre, who was the son of an immigrant from France who died in New York at age 27. 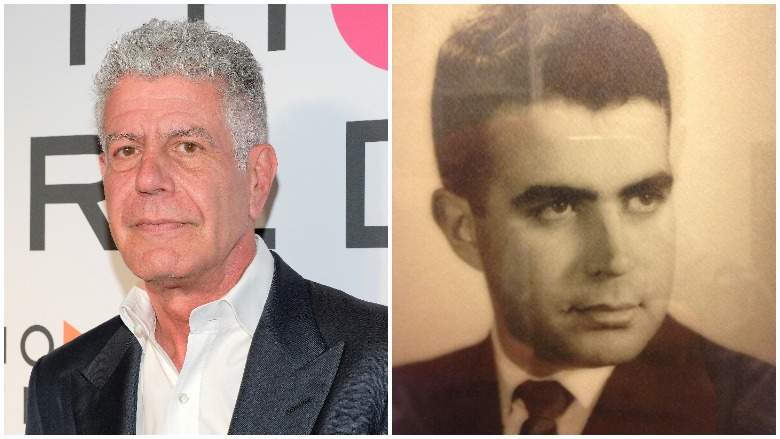 (left, Pierre Bourdain)
The French name came in handy when he grew up and became a chef. But Bourdain was also a talented writer and talker who also happened to love Cohen's hometown of Montreal.
Many have commented that Bourdain's personality and mannerisms also were strangely reminiscent of Cohen. But Bourdain was 6'4" - about 8 inches taller than the singer.
Could they have been father and son? It turns out they could...
His mother, Gladys Sacksman, was born in 1935 and lived in the Bronx. Jewish, she was an editor with the NewYork Times. She married her husband Pierre Bourdain in 1954. He was a Catholic. Late in 1955 at age 20, she became pregnant with Anthony. (More on her family background.)
At that same time, according to biographies Leonard Cohen (then 21 and enrolled in Law school at McGill) travelled to Rhode Island in October with his friend Peter Dale Scott, who famously coined the term "Deep State".
Thanksgiving weekend - the likeliest date - began on Friday, October 7 1955 - exactly 37.5 weeks from Anthony Bourdain's birthday. The average pregnancy lasts 38 weeks from conception and 37 weeks is considered full term. Bourdain was born a healthy baby boy on June 25, 1956.
Could this birth have affected the young Leonard Cohen? Let's see...
Cohen was known to sometimes drive all night to New York to visit "a girlfriend"-.
In the following year, Cohen dropped out of Law school in Montreal and moved to Riverside Drive in New York to start a Masters in English Literature at Columbia U (1956-7). By all accounts, he didn't study very hard and was not very happy.
He lurked around Greenwich Village, founded a poetry magazine called The Phoenix, and had his first severe bout of depression. Dropping out of graduate school, he returned to Montreal to work for a time in the family business, the Freedman clothing company.
He tried reinventing himself as a standup comedian, performing in Montreal clubs. He also spent time in psych wards, gave poetry readings around town and eventually moved to London where in 1959 he met Jacob Rothschild.
Gladys, who is apparently related to some Cohens and Friedmans, came from a family that included some small-time crooks. She is not mentioned in any Cohen bios, and went on to have another son, Christopher, in 1959 with her husband Pierre.
Gladys' husband Pierre became an executive at Columbia records specializing in classical music. Cohen's first record contract in 1967 was with Colombia (CBS) Records.
Gladys was a staff editor at the New York Times. Anthony Bourdain landed his first book contract for Kitchen Confidential in 2000 after his mother showed some of his writing to a senior NY Times editor.
Pierre Bourdain died in 1987 at age 57.
Both Gladys and younger son Christopher are still alive. They told the press after his 2018 death claiming Anthony was not suicidal.
Bourdain's Instagram account contained disturbing images suggesting he either knew about or was involved in dark practices e.g. cannibalism. He tweeted some negative comments about Hillary Clinton and Harvey Weinstein. There were rumours he had been planning to expose pedophiles in Washington just before his suspicious death by hanging in France.
Cohen and Bourdain moved in similar elite entertainment circles, and no one who makes it in that world is left untainted by criminal connections. 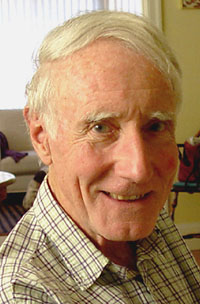 Cohen's college friend Peter Dale Scott was the son of Frank Scott, a noted McGill law professor and poet, and Marion Dale Scott, a painter who experimented with LSD in the 1950's.
Peter Dale Scott is best known for his 1993 book Deep Politics and the Death of JFK, and a long poem (Coming to Jakarta) outing his father, Frank (who was Cohen's McGill mentor) for his involvement with CIA operations in Indonesia in the 1950s.
------------
Related - Cohen had a son and daughter with his girlfriend Suzanne Elrod, a hedonist freak.
Thanks to Robert Phoenix for his  input and research.