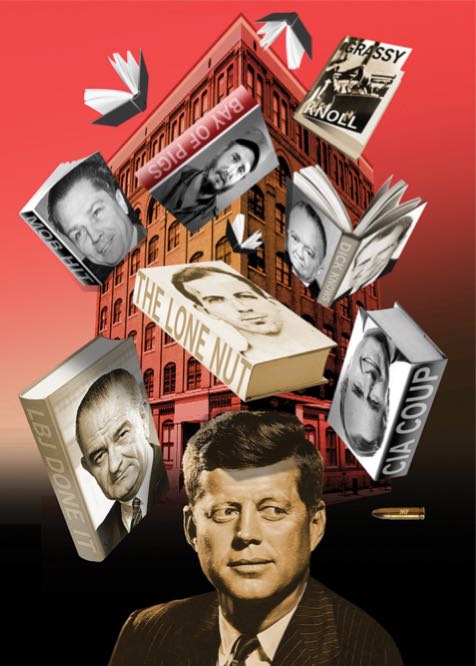 Tap on Hoover's phone indicates that the men
behind the shooters were J. Edgar Hoover, Alan Dulles, LBJ,
and G.H.W. Bush. But who was behind these men?
The Illuminati central bank cartel?
Fleshing Out Skull & Bones p. 194
By Kris Millegan
(henrymakow.com)
One of the most effective tactics employed by the JFK assassination was to "muddy the waters" by bringing in as many "suspicious" individuals as possible into the assassination arena, even having different reasons for each person's p[resence -- if there were a covert reason for being in Dallas on November 22, 1963, all the better. Scores of people were engaged in varied peripheral plots and sub-plots, many of which were related tangentially or not at all to the actual assassination. As a result, the pertinent facts drowned in a contrived whirlpool of suspicious but not necessarily related activity.
But who was REALLY involved?
Rodney Stich's book 'Defrauding America' tells of a deep-cover CIA officer assigned to a counter-intelligence unit, code-named Pegasus.  This unit had tape-recordings of plans to assassinate Kennedy from a tap on the phone of J. Edgar Hoover. 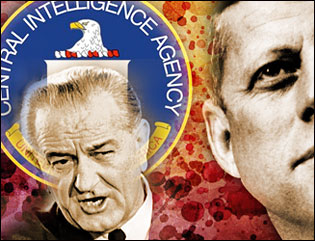 The people on the tapes were [Nelson] Rockefeller, Allen Dulles, [Lyndon] Johnson of Texas, George H. W. Bush, and J. Edgar Hoover.
According to Stich's source, there were conversations between Rockefeller, [J. Edgar] Hoover, where Rockefeller asks, "Are we going to have any problems?"
And he said, "No, we aren't going to have any problems.  I checked with Dulles.  If they do their job we'll do our job."
[Makow comment-  Who is "they"? CIA? Mossad? Mob?]
There are a whole bunch of tapes because Hoover didn't realize that his phone had been tapped. 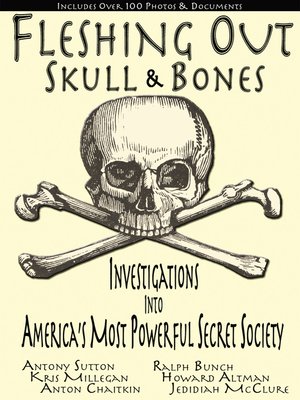 The inner core of the conspiracy is bound tightly together by oaths of secrecy and affiliations with various secret societies allied with various
Nazis groups, mind control operations, and business ventures. Much of the operational apparatus used in the conspiracy lay hidden in the shadowy world of ultra-secret national security state entities such as Division Five of the FBI, the Defense Industrial Security Command and double/triple agents of various allegiances. The Torbitt Document and [Dick Russell's] The Man Who Knew Too Much  detail the working of this actual framework. Agents from psi bureaus, future narcs, ultra-right-wingers, and doubles and dead ringers, politicians, spies, cops all fall into the mix.
--
Thanks to M for the tip!
Related -  Did Israel Kill Kennedy?  (Michael Collins Piper)
First Comment from M
I think Piper got it absolutely right.  The comments in Milligan's book do not leave out the Mossad and Apostate Israel as being the head honchos, movers and shakers in JFK's death.  They simply reveal the collusion of some of the other interested and interrelated parties, in the lower echelons of that conspiracy.  We know that America was led by Communist forces during WWII, from the very White House on down.
According to Curtis B. Dall, in "FDR, My Exploited Father in Law," the Commies were set up in and operating out of the White House right along with Franklin and Eleanor; we know that Wilson was controlled and managed by these Internationalists in his time.  The American Bankers who bankrolled the Bolsheviks and the Nazis worked out of their offices on Wall Street.  Didn't Trotsky, aka, Lev Bronstein, come from the Lower East Side, NYC?  Communism is a capitalist venture of the ultra-rich to enslave the masses, dispossess them of their properties and resources, which all become the property of "the state" and these, the ultra-rich, are that state.  See Des Griffin's "Fourth Reich of the Rich."

I saw an article in a major publication recently on the anniversary of the shooting that eloquently laid out the nine possibilities as to who shot Kennedy including, his brother Robert. Wow!

What's sad is this: the powers that be think we are so gullible that we would believe this crap. And what's sadder is that the general public does.

He tells you all the players involved and why.

i don't see mention in the article of JFK's Executive Order 11110, which was basically a move to shut down the illegal Federal Reserve Bank.

it seems to me that the Jews have managed to get the Christians to believe that usury/interest is ok whereas its clearly prohibited in Judaism, Christianity & Islam.
as a Muslim, its amazing to me to hear Christians say "oh, but that was in the Old Testament", when i ask them why they continue drinking, consuming pork, dealing in interest/usury, etc.

how the bloody hell can any man or Church decide to change or abrogate Gods commands?

the Jewish rabbis made changes/alterations to their own holy book, the Tauraat/Torah and have managed to hoodwink Christians into accepting changes/alterations to their Bible as well...and only Islam & the Quran is left.
from the time of Musa/Moses(peace be upon him), the Jews have been disobedient to Gods commands & their mischief has been continuing for all these centuries in different forms & under different names.

God is our creator and he knows best what's good for us & what we should abstain from. its not difficult to see the harms of interest/usury, if we just look at the Zionist banking cartel- this is the source of their power over the world.

getting back to JFK, i have NO doubt at all that the REAL culprits behind his assassination is the Zionist banking cartel because he was posing a direct threat to their source of power.

when it comes to J. Edgar Hoover, Alan Dulles, LBJ, and G.H.W. Bush, I believe they were just carrying out instructions from "higher up" & they couldn't have been the brains behind this because JFK's actions did not pose any real or direct threat to them.

furthermore, the Skull & Bones Society seems to be on a lower level of the hierarchy, like the Freemasons & their purpose is to serve as lackeys & errand boys for the "elite"

Please do not omit the hidden hand, BY WAY OF DECEPTION THOU SHALT DO WAR.
Ben Gurion was most certainly involved.

The JFK assassination left plenty of questions behind, including those of your article. Here are some more. Robert Kennedy was attorney general at that time. He said nothing, and did nothing publicly, to show any signs of being even a lousy AG, let along a good one, for this homicide. He was a tornado at going after the other mafia figures, including Jimmy Hoffa, but less than a limp rag at going after his brotherâ€™s killers. I heard that he asked Lyndon Johnson, â€œWhy did you have my brother killed?â€

Then, when he ran for the presidency, many people were saying, â€œIf he gets the nomination, he will die.â€ He also reportedly said, â€œOnly the powers of the presidency will enable me to uncover the secrets of my brotherâ€™s death.â€ No, Robert, the powers of the attorney general will enable you. All you have to do is use your usual tenacity, and then stay alive. Go into hiding, and run the justice department with a public announcement: â€œThere was a coup dâ€™etat when my brother was killed. As attorney general for this nation, I have a public duty to initiate a reverse coup dâ€™etat. This will get ugly, but for the vast majority of the American people, it will be beautiful.â€

I'm ashamed as an American that we never got to the bottom of the JFK assassination.

I'm also ashamed as an American that we allowed the MSM to run President Nixon out of office.

Methinks that any book about the Kennedy assassination that does not build on Kennedy telling Ben Gurion that he was NOT going to allow Israel any nuclear weapons is either designed to mislead or written by someone with tunnel vision scoped toward American politics only.

Mike Piper's research very likely got it right in his "Final Judgment." His ability to "read between the lines" of Jewish periodicals written primarily for Jewish consumption was uncanny.

The fact that it outsold almost all the other books supposedly telling the real tale but was allowed no true promotion anywhere is a pretty good indication that someone wants "Final Judgment" down the memory hole.