Can a Monkey Be a Mensch? 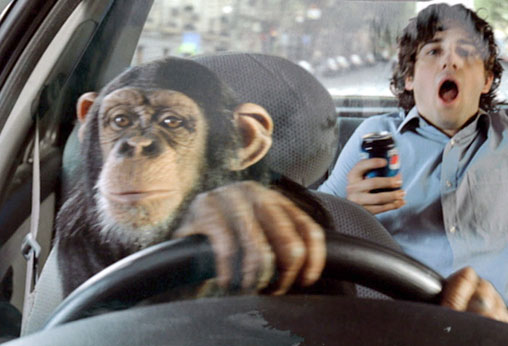 The purpose of human existence is to express our godliness.
Human beings are monkeys
who have a soul, a spark of Divine
Consciousness.
The cosmic conflict is played out
in a battle for the human soul,
between man's monkey instincts
and his inner Mensch.
by Henry Makow PhD
It is a constant struggle not to be an asshole. Not everyone succeeds.
This battle is waged both collectively and personally. I see it in myself.
Waiting in a line, impatient, my monkey shoots the frumpy woman delaying me and dumps her body in a pit. But my mensch reminds me that she has the same claim to happiness as I. Be patient.
My monkey cheers when he reads that a boatload of migrants have drowned.  But my mensch reminds him that they are denied the necessities of life by Cabalist imperialism.
My monkey objectifies women and wants to have sex with every attractive woman he sees. My mensch reminds him that women are people and not sexual utilities. (Feminism has  reduced women from beloved wives and mothers to volunteer prostitutes.)
My monkey is identified with his money. He grows or is diminished according to fluctuations in his trading account.
My mensch reminds him that money is just digits on a ledger, and given his lifestyle, he has more digits than he'll ever need. (See also, Our Toxic Blood Supply.)
I am two people.  My monkey is greedy, selfish, cowardly, impatient, lascivious.
My Mensch is compassionate, Loving, fearless, patient, at Peace.
Who drives and who sits at the back?
This is constantly the issue depending how Conscious I am.
Consciousness = Divine Spark = Godliness.
There is nothing stopping me from being the person I want to be. Except laziness and lack of focus.
WAR FOR THE SOUL OF HUMANITY
This is also the conflict facing mankind. Our Cabalist masters eliminate any acknowledgement
of our Divine connection, better to enslave and cull us in contrived wars.
This is the essence of the Satanic assault. The world is run by assholes. Humanity is walking a tightrope.
Cabalists have alienated us from God when God is the only path to the fulfillment and happiness we all seek.
Thoreau said we cannot achieve what we do not aim for. We must express our Divinity. That is the purpose of life.
Despair feeds Satan's cause. Faith affirms God's plan. Faith = a light in the darkness.
Who drives and who sits in the back? It's a constant negotiation between ape and mensch.
Ape cannot be ignored completely. We are both.
The beast must be fed. A hungry ape is harder to control. He lives in an ape-dominated society.
Be Positive. What's happening here is a Miracle. Life on Earth is an ineffable Gift.
Self control. Self discipline. Self mastery. These refer to soul (Self) in the driver's seat.
Who are we going to be? Angels sent from God to create Heaven on earth?
Or demons determined to prevent it. Heaven or Hell of our own making?
Personally and collectively, our choice is to be Conscious or remain asleep.
---------------------
Related - Makow - Cohabiting with a Monkey
---------------------- We all Suffer from a Mental Illness
---------------------- I am an Egotistical Person

Comments for "Can a Monkey Be a Mensch?"

That fricking monkey, we'll be wrestling with him till the end of our days, no way around it. He wants to jump in any attractive girl out there and love those digits, you put it really well Henry. Again it's all about self mastery and strength. That monkey is good fighter, our biggest match. that's why heath is paramount

Henry, you are quite right.

This, is not easy, and this is the conflict which was prophesied by God, in Genesis; “I will make you enemies of each other; you and the woman, your offspring and her offspring. It will crush your head, and you will strike its heel” Genesis 3: 14-15 The Spirit of Man, came first, before the Spirit of Logos. So, the Monkey, is in the driving seat, and has been in the driving seat from the start. However, The Mensch, Logos, common-sense, was sent as an “adviser” “Counselor” “Teacher” of the Monkey. But of course, the Monkey finds trouble listening to Logos. The monkey like his instincts, not Logos insights. But Logos, is not going anywhere. And every time the monkey makes a mess, (as it often does) the Logos is there to tell him “I warned you!!”

The Money thinks Logos is an enemy. But until the Monkey realizes that Logos actually is right, the struggle continues. That’s why Logos tells all the Monkeys this; “But the Hour will come-it’s here already-when true worshipers will worship the Father in Spirit and Truth, that is the kind of worshipers the Father seeks. God, is Spirit, and those who worship him, must worship him in Spirit and Truth” John 4:21-24 We have to keep our monkey in check, and listen to commonsense, who is Logos in us.

That’s all what Yahwehism was all about, which he, when he appeared as Ye-ho-shua, “Yahweh-who-saves-Yahweh” ratified it as Christianity.

“You must Love the Lord your God with all your heart, with all your soul, and with all your mind. This is the greatest and the first commandment. (Deuteronomy 6:5) The second resembles it: You must love your neighbor as yourself(Leviticus 19:18). On these two commandments hangs the whole law, and the prophets” Mathew 22:36-40

Human beings are not monkeys, nor were they ever monkeys. If humans descend from monkeys, there would be no more monkeys, since monkeys
would all be humans by now. Moreover, only men sin and rebel against their Maker - Chimps don't charge interest on loans or murder one
another like stupid humans. Chimps are righteous creatures when compared to humans.

Coincidentally I watched "2001 Space Odyssey" a couple days ago, ever mindful of Bill Cooper's explanation of the Babylon Mystery Religion;
That movie shows how Satan misrepresents humans as stupid chimps for being in harmony with the Creator, as they lived without want of
anything as they foraged for vegetation. Not until Satan endowed man with "supposed" intelligence and the lie that he can become God as he
touches Satan's black stone generative penis of foundation, he starts eating meat, murdering one another and works dead end jobs, which
reminds me the only reason there is a space program is to weaponize space.

Man was created in the image of God but lost that status after being duped by Lucifer. Nevertheless, people continue to worship Satan and his angels through "Christmas", "Easter", "Sunday Worship", "Halloween", etc.., they continue to empower the devil at their own
expense.

Ancient people of Atlantis had flying saucers, advanced communication and medicine . People are not evolving, they are de-evolving into
something much worse than monkeys.

It's always a kick when you expose your alter-ego. Looked like that "frumpy woman" never had a chance. But ha!! You let her live.

Re: "a boatload of migrants." True that some are the sorry victims of ruthless global communism, but many are the actual soldiers of the enemy, and our rush to compassion can sometimes blur that fact. This makes everything a case of discernment and proves that much is not black and white; there are so many shades of a universe of contrivance and deception.

Sexual attraction, it's in our DNA. Okay to be attracted (often) but
it's what we do with that attraction that matters. Tolle might say, "Go to your noticing place and move on." Ha! again.

Money earned honestly has a right to make us feel good. The bastards that steal it with corruption and unjust taxes and exorbitant inflation, fees, licenses, registrations, insurance, are interfering
with our feeling good. They are the ones who cause our anxiety about money, because we know they are ever lurking to steal it.

So, like all of us, you have an angel and a devil residing within and always at your service. I don't know if creation will ever be free of this. Perhaps it is the journey of the soul. I don't know if the
idea of finally "arriving" and transcending this duality is real.

Could be. Still, I say smash the devil. Run him down and castrate
him. He may offer some good times, but ultimately he sucks all the
joy out of life and gives suffering in its stead.

Once again you've used your site as a confessional. It benefits us all. And with the powers vested in me simply by me being a child ofGod, I forgive you of all offences and weaknesses. Please forgive me.

That's great Henry, what you wrote today, thanks, I enjoyed it, and indeed, it's 100% applicable to myself as well and quite an astute description of my own struggles.

I think it's pretty universal.

Your article reminded me of E. Michael Jones and the concept of logos first, ethos second, and pathos last. This is the correct order commanded by God, but people have been misdirected purposefully to live upside down. The consequences in all walks of life are clearly visible now.

On a side note, logos is the main characteristic of a real man (besides having virtue and responsibility). It makes total sense why we are where we are when real men have been removed and replaced by ‘empowered’ women. Now we are force fed to be run by pathos first.

Thank you for bringing a chuckle to my day.

As St. Paul said "save your soul in fear and trembling" and it is so true. Every day is a constant battle to do God's will instead of our own. Jesus Christ taught us to elevate ourselves out of the muck and become adopted sons of our Eternal Father.