Gangster Trump Destroyed His Own Brother 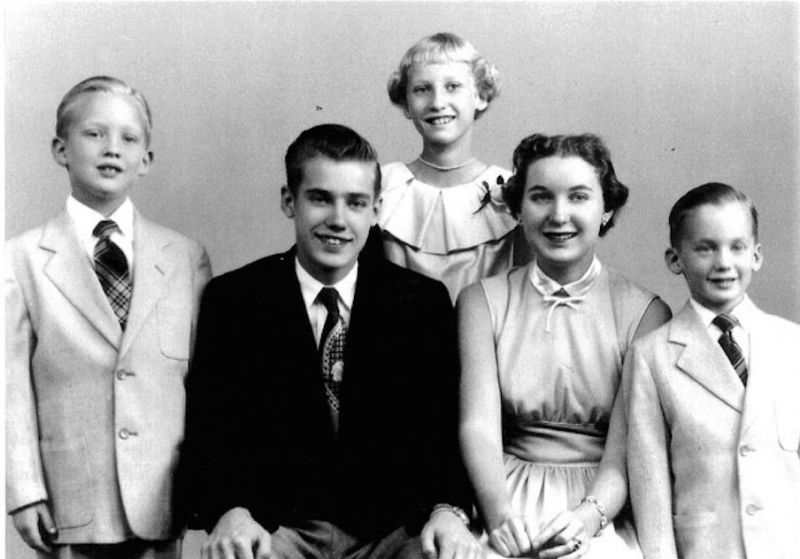 (That's Fred Trump Jr. in the black jacket. Donald is at his right. My Jew-dar says his mother is Jewish.)
What could he do to you? Donald Trump was raised to "win"even if it means running roughshod over any opposition. He has no human compassion. He is a monster.
This Iraq story reminded me of how Trump treated his own flesh and blood - his brother.
Seems Trump demanded that Iraq sign over half its oil revenues in exchange for the US rebuilding the infrastructure it destroyed. Iraqi PM Adil Abdul-Mahdi got the Chinese to finish the job on better terms. Trump demanded Adil cancel the Chinese deal and instigated "popular riots" to pressure him. Recalling Ukraine, he had Marine snipers kill some demonstrators. When Adil and the Minister of Defence revealed the snipers were not Iraqi, Trump threatened to have both men killed. Adil resigned.
Updated from March 29, 2019
by Henry Makow PhD.
Watching A&E's The Trump Dynasty,  I was surprised to learn that the President had a brother, eight years older, who had been the designated heir to the family business.
Frederick Trump Jr. did not have the "killer, winner-take-all instinct" that his father demanded of his sons. So Donald supplanted him.
What is unusual about this story is the downright cruelty with which he was treated by his family. Instead of acknowledging he was just not ruthless enough and given a position of honor and love, he was virtually driven out of the family.
THERE WERE ONLY TWO KINDS OF PEOPLE - WINNERS AND LOSERS AND FRED JR. WAS A LOSER.
He began a new career as an airline pilot but the wounds drove him to drink. When he returned to his family home, they gave him menial jobs. He died prematurely "of alcoholism" at age 43 in 1981.
He had married and had two children before divorcing. When Fred Trump Sr. died in 1999, Fred's family was not in the will. When they sued, the Trump family cut off health insurance on which they depended for the care of a gravely sick child.
WHAT MAKES DONALD RUN?
Unfortunately, Donald Trump is our only defence against the Commie hoards. We like his policies on migration, gender and the Supreme Court.
We appreciate his defence of white people, Christians and heterosexuals from Communist onslaught. We hate his servile support of Israel. (Did you know his family was close to Netanyahu when the latter was the UN Ambassador?) We hate his gratuitous sabre rattling with Russia, a betrayal of his campaign promises. We know his MAGA is bait for MIGA.
Trump is a typical New York Jewish hustler/wheeler-dealer whose whole life is predicated on the pursuit of money, sex, fame and power. Typical of many Jewish families, children have to "earn" their parents' love by overachieving. 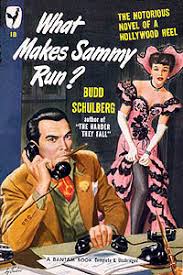 Whatever the reasons, the fact is, Trump is all about glitz, bluff and bullying. For example, he called the editor of the  Forbes 400 (richest people in America) pretending to be "John Barron" the head of finance at the Trump Organization.  He convinced the editor that  Trump was worth a lot more than he was. Trump was later able to literally take this to the bank. His empire was built on bank loans and tax breaks. 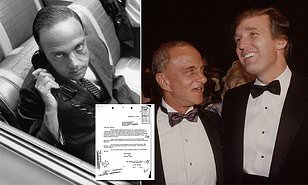 (Trump with gay Jewish mentor Roy Cohn, who pioneered
the Epstein honey trap operation for CIA-Mossad.)
He went belly up in the 1990s but the bankers spared him because they saw a use for him down the road. How right they were!
There's more. Trump is a highly compromised character, not because of the things the Democrats go after, but because of the things they don't, which indicates the whole thing is a charade. Trump rode Jeffrey Epstein's Lolita Express and is being blackmailed by Mossad.
But there's more. Ever wonder how his daughter Ivanka and her husband Jared Kushner got to be White House advisors and impose a satanic Chabad agenda on US Foreign policy?
Trump was never shy about inferring an incestuous relationship with Ivanka when she was a teenager.  He is basically in their thrall.
COMPROMISED
The following is sourced here.
"Many of Trump's disturbing comments have been towards his eldest daughter, Ivanka (his favorite child). When appearing on The Wendy Williams Show with Ivanka once, host Wendy Williams asked what their favorite father/daughter pastimes were.

The president replied, "I was going to say sex, but I can relate to [golf and real estate]." 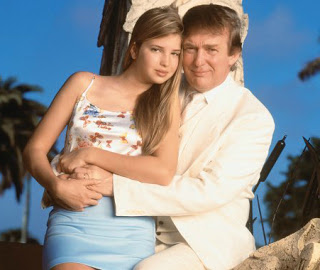 Most fathers would not want to discuss their daughter's nude photoshoots, whether hypothetical or otherwise. However, Trump is apparently not most fathers.

Once during an interview on The View, Trump made everyone uncomfortable when he said,

"Ivanka posing for Playboy would be really disappointing ... not really. But it would depend on what was inside the magazine. ... I don't think Ivanka would [do a nude shoot] inside the magazine, although she does have a very nice figure. I've said that if Ivanka weren't my daughter, perhaps I'd be dating her."

Most women feel as though they can relax around their fathers, and they won't have to face the same objectification they must deal with in the world. However, that isn't the case with Trump and Ivanka.

On The Howard Stern show back in 2003, Trump said, "You know who's one of the great beauties of the world, according to everybody? And I helped create her. Ivanka. My daughter, Ivanka. She's 6 feet tall; she's got the best body."

Apparently, Trump's fascination with Ivanka started well before she was an adult. Washington Post columnist Richard Cohen reported that when Ivanka was just 13 years old, her father asked, "Is it wrong to be more sexually attracted to your own daughter than your wife?"

The Post reportedly removed the quote from the column before it was published." 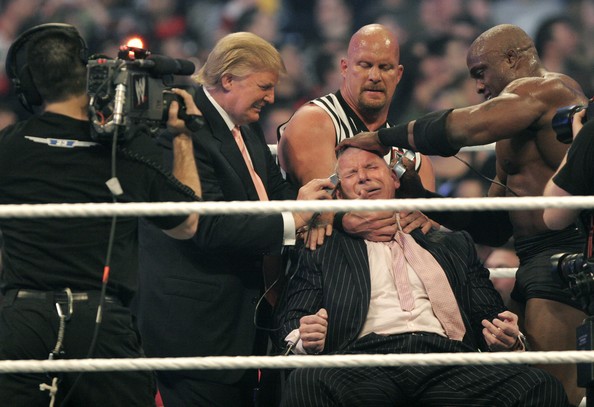 (Left versus Right, as phoney as Wrestlemania)

Politics is basically a charade run by the central bankers. I wouldn't be surprised if the self destruction of the Democratic Party is designed to re-elect Trump in 2020.

We are caught between a Masonic Jewish rock and a hard place - Communism and Zionism, two paths to the same destination, global tyranny. The bankers always control both sides of every conflict so they can determine the outcome. They don't touch Trump's hand signs, or Ivanka, or Epstein's Island, just as, during WW2, they didn't touch the fact that Hitler had been a male prostitute. They need to build up both sides.

In any case, do we have any reason to feel loyalty to Trump? He is the lesser of two evils, but evil nonetheless.

His view of personal self worth is extremely superficial. His ruthless pursuit of power, sex, money and fame does not bode well.

His gun-to-the-head style of negotiation could result in a nuclear war.

Comments for " Gangster Trump Destroyed His Own Brother"

The plot, they scheme, they trumph for a season.......but they started as dust and will end as dust, and will then have to give account to God.

The ruthless people of this world are truly to be pitied.

am glad others on to the fact that the Democrats are meant to fail next election. Somehow the Russian investigation now goes away. Why now? Hillary does not want to run? She must have been ordered or advised to at least delay till next decade. Interesting timing also before Israeli elections. Will a coalition of Iran and Syria attack Israel before long and the Globalists have decided that Trump is the right man for the job?

At any rate, Trump has impressed the Globalists and they seem to favour him to win. Perhaps we may see a candidate like Ralph Nader run against the main Democrat presidential nominee before long thus securing The Donald's victory.

There are reports that Ocasio-Cortez is very likely an actress playing a comic book role to undermine the Democrat Party for the elections. Let all readers keep that in mind:

I was shocked regarding how Donald Trump talked about his daughter:

"I've said that if Ivanka weren't my daughter, perhaps I'd be dating her." - This implies that President Trump has a desire to have sex with his own daughter !?!? ðŸ˜¨ðŸ˜µðŸ˜±
This is SICK!! Nature gives normal people psychological blocks from even thinking about having sex with ones own flesh and blood.

Normal and healthy men don't even consider incest i.e. having sex with women with whom they are related by blood i.e. their mothers, sisters or daughters...

I have three daughters my own flesh and blood who have my looks and physical features. They are obviously my own blood. I cannot imagine saying about my own daughters
what Donald Trump had said (and thus implied) about his own daughter namely that he would date and by extension have sex with her (since that's the point of dating in the end isn't it?)

Donald Trump Is Into Incest. Yes.......It is crazy but that's the crazy world we live in.... It seems that Trump can't tell the f**ing difference between other women to HIS OWN DAUGHTER!!!!!

The people in power are really weird!!!

I don't believe America has ever had a President like Donald Trump and probably never will. He's like the wild card or joker in a deck of cards. He's sometimes unpredictable and can work a "deal" with almost anybody.

I admit he says some stupid things at times but his courage is something like Washington hasn't had in a long time. He's not afraid to call a lot of things as they are.

Donald Trump has also matured a lot these last few years. He doesn't claim to be a devoutly religious person but he is defending aggressively some of the moral biblical teachings. Even more so than some of the past Presidents who claimed to be Christians.

Having Christianity in the home when being brought up is a huge blessing. But, we must remember that not everyone had that blessing or kind of upbringing so we can't judge.

I really wouldn't want the burden of being a rich man's son. Too much is often expected and you are too often judged by what your father was rather than who you are.
It's a good thing for America that President Trump has a "thick skin" demeanour about him. If he didn't the MSM would have succeeded in ruining him and his presidency a long time ago

Learning to live with other peoples' expectations is difficult. The people in the socialist government are liars, thieves, and most of them are sexual perverts. Notice, nothing has happened regarding the "Pedogate" or "Pizzagate" evidence that presented itself in 2016.

The governments have produced centuries upon centuries of wars and looting of the economy through the Satanic banking system. Does anyone really think this is going to be better under the Trump presidency? Arguably, Trump would be better than Hillary but if the whole process is evil, no one can work with it for the benefit of mankind. It is just one screw-up after another. But what pisses me off the most is the abuse of the children. This has been intolerable and nothing much has been done about it. When you have "law enforcement" that is a part of the Freemasonic Satanic death cult, no major problem like this is ever going to be solved. The reason is very simple. If the foundation is essential evil; then the whole thing is going to be evil. Any good that is done is there to be a smokescreen or a cover for the evil. Nothing really gets better. Since the religions are licensed by the STATE, State, or state, they aren't much help in building up the moral standards of society.