Has Australia Sold Its Water Rights to China? 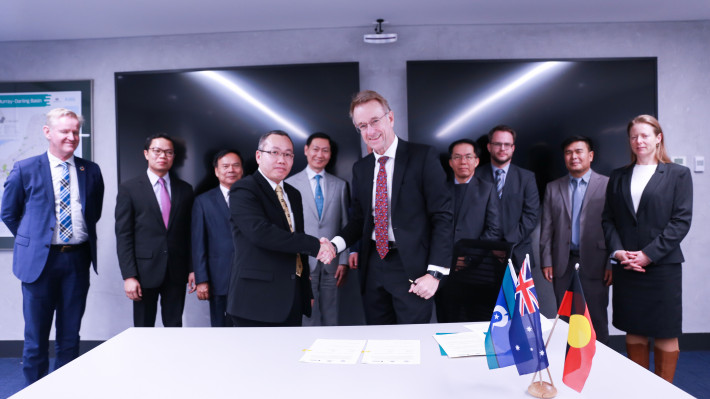 Bushfire Crisis: The De-Kulakization of Australia (2)  Part One is here.

Linde asks if the agenda is to

depopulate the Australian outback in advance of a Chinese takeover.

Canberra, Australia, 6 June 2019 - Mekong basin-wide planning, environmental monitoring, flood and drought management, climate change adaption, and stakeholder engagement are some of the key areas to benefit from a renewed partnership between the Mekong River Commission (MRC) and Murray-Darling Basin Authority (MDBA) of Australia.

Fozdyke: "The Chinese government is now talking more openly, if indiscreetly, about the future of this wealthy country and its ignorant and stupid people."

Before these fires started in the Spring of the Southern Hemisphere 2019, there was a completely censored delegation from the Mekong River Commission to Australia in June 2019.

Geographically, the Mekong flows from the Tibetan Plateau in the People's Republic of China through its vassal states on the Indo China Peninsula.

The Mekong River Commission (established 1995) is officially an 'intergovernmental organization' which is the "platform for water diplomacy as well as a knowledge hub of water resources management for regional sustainable development."

The MRC has been involved with the MDBA from the git-go, from the time the MDBA was established in 2008 and became a 'stakeholder' in a "multi-jurisdictional" Plan that involves the Mekong River Commission. The MDBA acknowledges that it is part of the "world's first multi-jurisdictional water management framework."

In June 2019, the delegates from the MRC arrived in Australia to inspect the management of the Murray Darling Basin Authority and renew their agreements.

This inspection and a renewal of the 'memorandum of agreement' ceremony were completely censored in the Australian media. On June 6, 2019, Communist China's MRC and the MDBA attended the ceremony in the Australian capital, Canberra.

So there is an agreement in place. What kind of agreement? Www.mrcmekong.org is blocked in Australia.

This much can be found out from the Google Page One of blocked Ips in the search for information about the arrival for the MRC to inspect the Murray Darling Basin operation. The MDBA is a stakeholder in the MRC and has attended MRC stakeholder forums from the beginning of its establishment.

Now. The MDBA is solidly in the frame as one of the Very Bad Guys in the Big Six Year Dry - the precondition for the firestorms of Australia's Bushfire Summer 2019-20. Even the mainstream media, notably the ABC, has relentlessly kept the spotlight on them as the Major Stuff-Ups responsible for the demise of the Darling River system below the Murrumbidgee.

Problems With the Murray - Darling Basin Plan - Behind the News.

Australians will naturally reach for Hanlon'g Razor. But I would say: not so fast. The total incompetence of these MDBA suits is not enough to kill an entire river system. For that you need organization and planning. And in this case, I would say you need UN Communist climate change dicta for 'sustainability' and a multi-jurisdictional framework under the Chinese Communist Party. 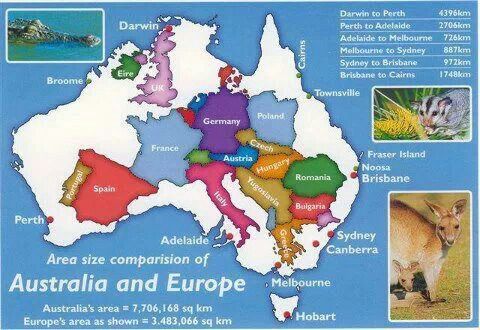 Australia is responsible for delivering the Incompetence In Toto as the cover story for the planning, organization, bi-partisan political control (and controlled oppositions), geo-engineering, dominance of information (a big thank you Hua Wei and Verison of Israel) and, of course, a chain of command. This latter will be very covert because all Western minions must believe in the official government co-incidence theory - no matter how bizarre, physically impossible or stupid. As the Jewish mothers tell us back in the States: "You can't fix stupid" and they are right.

The Planners naturally factored in our old pals greed and corruption as part of the sistema.

In a word, an ecocide of the magnitude of the dry-out of an entire continent requires the social Masonry of The Owners. Because, if you are going to have a fire sale, you first must have a Big Dry out of the asset. And this has now been proceeding for about six years.

At some point the initial stage of this operation must be completed and the next stage commenced. I speculate that the water diplomacy visit of the MRC delegation in June 2019 was concerned with this business. The beneficiaries of Australia's water rights for the Novus Ordo Seculorum paid us a visit and inspected the management of a major player in the Big Dry - namely Comrade Multi-jurisdictional Stakeholder, the Murray Darling Basin Authority.

The MRC signed off on the completed tasks. Spring 2019 , stage two of the Big Six Year Drought commenced.

Not to boast against the Anti-Semites who were liable to the death penalty under Lenin and Stalin, but back in the day when the Triumvirate of Stalin, Molotov and Trotsky (the real deal) came up with the plan of 'sovietizing' agriculture for ZOG East in the USSR, the great class enemy of the people was the Kulak and the sub-Kulak ( those deemed by The Party to have Kulak attitude ). 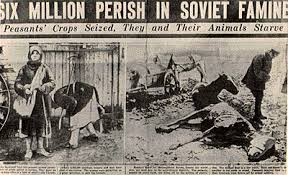 When Stalin announced the Five Year Plan for Socialist reconstruction 1929-1932 , the Triumvirate made it clear to the Duma that liquidation of the Kulak was essential to The Plan. And Stalin duly made the Kulak liquidation speech on December 27, 1929.

At that time in the Soviet republics , the Kulak consisted of a husband and wife with at least 2 children in possession of the family farm of 12 acres and 1 cow, 1 hog, 1 horse, 10 sheep, 20 chickens. Thus : the Kulak - class enemy number one was the Slavic peasant family making a go of it with 12 acres and a cow.

The more things change - even in the days when the mantra itself is 'change' - they do remain the same.

Surprise. Surprise. To the Global Communist Order and its Commissars in charge of socialist reconstruction in every vassal state owned by the Central Banking Cartel, the number one class enemy of the people in the 21st century is : the Kulak aka the Boer and indeed the ethnic farmer of every nation undergoing sovietization.

The Australian Kulak is no exception. Although, I must say, that our Kulak in addition to being a class enemy of the NWO is an intransigent climate change denier.

The Australian Kulak retains a deep, abiding distrust of the UN (the world's largest Communist praesidium) and does not believe that CO2 emissions and fossil fuels are the cause of climate change and eco-catastrophes such as the Big Six Year Dry and the national bushfire emergency currently blazing across three states. 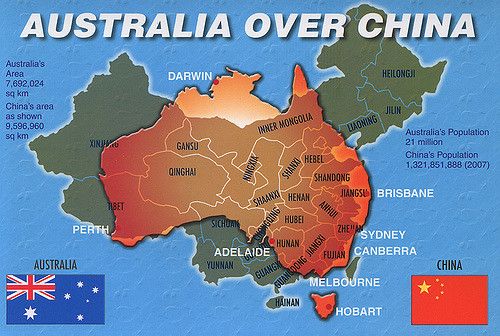 Worse luck for our Commissars, the average Australian Kulak votes in Australian elections. And the Kulak vote belongs to the Deplorable base that helped to elect the Climate Change Denying LNP government in the May 2019 election. It was elected on the same platform created by Scott Morrison when he was the treasurer in the LNP Turnbull government 2017.

During the Parliament Q & A , Mr. Morrison brandished a piece of coal and went on record with the a position he took to the May 2019 election: "Don't be afraid. Don't be scared. It won't hurt you. It's coal." Cue international outrage and opprobrium from the usual quarters.

Come the May election 2019, the Kulaks, of course, just voted 1 for the LNP against Labour's Bill Shorten, the straight up Bolshevik who got a man fired from his job for just asking a question.

And for The Owners of Australia Inc. and Our Betters, in the midst of the December 2019 firestorm and the Cudlee Creek and Balmoral devastation in New South Wales and South Australia, PM Scott Morrison, the climate change denier, did not disappoint in his official capacity. 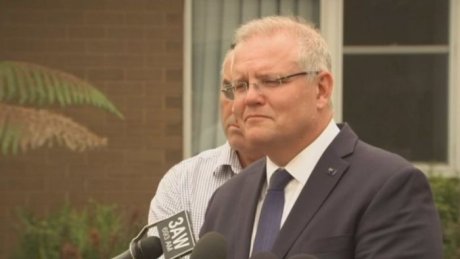 His Handlers had him on vacation in Hawaii as a firestorm the size of Greater Sydney approached Sydney itself. He was returned forthwith to face the media and to defend his government's position on climate change. He was scripted with lines crafted to trigger a complete ASD meltdown in Time's Person of the Year and her fanbase.

Here is a sample of his gaffes. He claimed that compensation for volunteer firefighters is "not a priority". (We are talking about Australia's BEST fighting mega-fires across three states here ). And he was trotted out a second time before Christmas to reject calls for more assistance to firefighters. Volunteer firefighting organizations, he opines will be analyzed 'post these events'.

You could not make this shit up. Unless, of course, what is here being staged is a psy-op in Hybrid Warfare. In which case - then - yes, we have some very creative minds at work..

And, as one might expect, Class Enemy No. 1, the Kulak has been handed the bad guy 'fault' script for poor land management in terms of climate policy. Seriously. Class Enemy No. 1 is responsible for the 'multi-jurisdictional' Big Six Year Dry and the bushfires.

Pull our other leg - Sky News if you are going to entertain us at a time like this. Round up some of those MBDA suits and give them a national sorry day script.  Paying the Price for Poor Land Management. Sky News Australia.

Related-  Half a billion animals potentially killed in Australia wildfires

Re: Has Australia Sold Its Water Rights to China?

The correct answer is, not just its water rights. The Australian government is selling off everything, although in many cases it's more or less given away.

The same is true in New Zealand and Canada, but the Chinese government is concentrating on Australia for what I hope are obvious reasons. It's based on voting. Since 2006 very time Australians, New Zealanders and Canadians vote in any election they've been voting for the Chinese Communist Party.

If you've never read the legislation, if you don't know what a D.A. Notice is, or if you haven't a clue about vice-regal appointment documents then I know that my statements don't make sense - but that's how the power shift was arranged. And by the time the predominantly white, Xtian trash wake up there'll be nothing left for them to wake up to.

When the invasion of Australia happens the world will see the truth about the myth of 'the brave, bronzed Aussie'! Our military isn't a match for China's and the Australian people were first disarmed before they began voting away the soil from underneath their descendants' feet. I'm not responsible for the fact that these still colonists don't understand how their constitutions don't work, but I am responsible for the fact that the Chinese government does.

Comments for " Has Australia Sold Its Water Rights to China? "

Did you ever read this...China has a problem -- its population does not match its resources and gross domestic product. China's more than 1.3 billion people don't have the resources to adequately care for themselves [source: University Nebraska at Omaha]. This has led China to begin exporting its people, in a sense, by setting up shop in other parts of the world
[https://people.howstuffworks.com/china-taking-over-world.htm]?