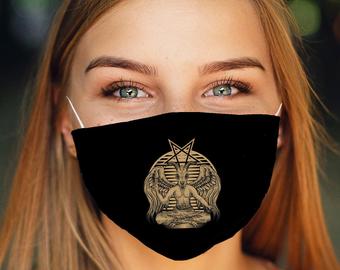 In other words, what if the Mark of the Beast on the right hand and in the forehead simply means the people buy into the new system, hand-and-mind?
Symbolically speaking, first the initiate willingly believes the deceptive story being promulgated by the powers-that-be (i.e., keep in mind that belief is a function of the mind/forehead), and then the initiate willingly and earnestly participates in the occult initiation and programming (i.e., begins wearing masks...washing hands...social distancing...locking down).
Voila!  You now belong to the powers-that-be, hand-and-mind.  They've captured you with a lie, and you don't even realize it.  In this case, it's the coronavirus lie.
They've got you dancing to their tune.  And that's precisely what the Mark of the Beast accomplishes when Satan gets here:  Mental and emotional acceptance of the Satanic "Mystery, Babylon" system by the people of the world.  And willingness - even eagerness - to work within that Satanic system, to its benefit.  That's your "mark."  As it's written:
Revelation 13:8 And all that dwell upon the earth shall worship him, whose names are not written in the book of life of the Lamb slain from the foundation of the world.
The only difference at this point is that Satan is not yet physically here to deceive people with his miracles into joining his global beast system and installing him as its god.
But his henchmen are here, and they're softening up the world with these global occult ritual initiations, in preparation for the time when their father the devil finally arrives in his splendorous role as the false messiah and offers the "mark" in much the same way its precursor is being offered to us today.
That's why I say this occult global ritual initiation/transformation is nothing less than a sneak peek at the Mark of the Beast -- a global dress rehearsal for it, if you will.
The beast commanded the ritual initiation of the people of this earth, and literally billions of people worldwide fell into stride and unwittingly (yet quite willingly) participated, hand-and-mind, in their ritual. 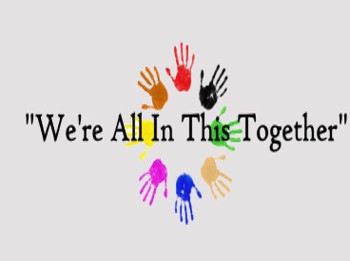 Think about it.  Virtually the entire world - with the exception of God's elect -- rallied around a singular global banner that was emblazoned everywhere.  And that banner read: "We're all in this together."
Folks, when Satan finally arrives in his role as the false messiah, that's exactly what the Mark of the Beast is going to be like:  The whole world coming together as one, and then going to work for the system, under its new leader.
The story you'll be asked to believe - the lie they'll be promulgating -- is this: "Jesus is here."  But as the Scripture warns:
Mark 13:21 And then if any man shall say to you, Lo, here is Christ; or, lo, he is there; believe him not.
You've believed the lie with your mind, just as people today have been completely taken in by the coronavirus lie - the lie that a virus with a 98.5% survival rate constitutes a "global pandemic" through which we must give up all of our liberties and freedoms....
You've embraced the new system with a hand-clasp, just as literally billions of folks around the globe, today, are enthusiastically (yet unwittingly) embracing the ritual occult mask-wearing, hand-washing, six feet of separation, and lockdowns imposed on them by their new global masters.
In short, it's my belief that what we're seeing today is a global dry run for when Satan finally gets here and deceives the world into accepting the true Mark of the Beast.
CONCLUSION
This short, 12-minute video, titled "The Characteristics of an Initiation Ritual," synopsizes some of the most pertinent points I've tried to explain in this commentary.  It's well worth the listen:
The bottom line is this:  You can choose to become another brick in the wall of this fledgling global order they're trying so desperately to usher in (and which, I believe, will ultimately fail, based on Daniel 11:14).
Or, you can choose to remain a living stone in the Temple of the Most High God (I Peter 2:5), and stand firm in your purpose as a vessel through which His Word is transmitted to others.  That is your eternal destiny IF you're not talked out of it through deception.
Choose very wisely.
--
First Comment from Andy S-
"But what if the infamous Mark of the Beast is not a visible mark, at all?  Not a vaccine.  Not a tattoo.  Not a "quantum dot."  Not a scarred brand on seared human flesh.  But instead, an invisible, spiritual mark?"
I have long held this belief, the final struggle is for our souls rather than anything material, or even visible. OTOH, following along with these material requirements DOES leach away at our souls. Following the mob will come at a price not readily quantified.

Comments for "Covid "Safety" Mirrors Initiation Into a Satanic Cult "

The mark of the beast isn't just what this guy's article says...it's too simplistic...God didn't reduce no seven years either!!

The mark will be some physical mark after one participated in a Luciferian initiation in order to enter the New Age [David Spangler].

Whatever it is in the end, it has to be a real mark either on the right hand or on the forehead.
God put a mark on Cain, a real mark!

Whoever the author of this article is, he's just another protie making things up...as usual!!!
Regarding this mark, pay attention to what David Spangler said...

Dibouk is an interesting puzzle piece. (Peter's comment below)

Throughout this virus drama, I've repeatedly heard that the virus can be "caught thru the eyes". That takes on a different dimension if you think of it referring to hypnosis or mesmerizing someone. Forcing everyone to stay home and watch TV or computers (scrying mirrors) and subject themselves to nonstop subliminal programming seems like a pretty solid strategy.

Recently Israel Shamir wrote in the Unz review:-
As we look deeper into the unfolding disaster we notice features more designed to instill paranoia than profit and peeping should require. If you spell ‘COVID’ in Hebrew letters and read it from right to left, as Hebrew words are read, you will get דיבוק, “Dibouk”, the demon of the Cabbalists, the evil spirit likely to enter and possess a person suffering from ‘emotional intensification’, noted Bogdan Herzog, a Romanian mystic from Timisoara. Dibouk is a popular figure of Jewish folklore, the subject of plays and films. Herzog’s analysis continues: maybe the analogy with demonic possession is not superficial but profound. What if COVID is more psychological than biological? Perhaps through extreme fear induction (“emotional intensification”), people behave ‘as if’ possessed by the Dibouk? They certainly seem to act as though mesmerized, unthinkingly obeying the conflicting demands of the authorities and accepting unprecedented limitations on individual freedom

The article has valid points on initiation. The spiritual mark may include taking the Noahide laws or sharia thus pledging not to commit idolatry (they think Jesus is idolatry so pledge to these laws denies the Creator). It may include JUBILEE debt relief like GESARA including universal basic income and free education that some will accept with the proviso they must deny Jesus as Lord (making it a willing act). Our debt climate will make this much more “tempting”. I think the mark will also be physical (hand in hand with the open denial of Jesus): Revelation 16:2 “And the first went, and poured out his vial upon the earth, and there fell a noisome and grievous sore upon the men which had the mark of the beast, and upon them which worshipped his image.” (KJV) Note: Will the stinky open sore be at the place of the vaccine or chip?