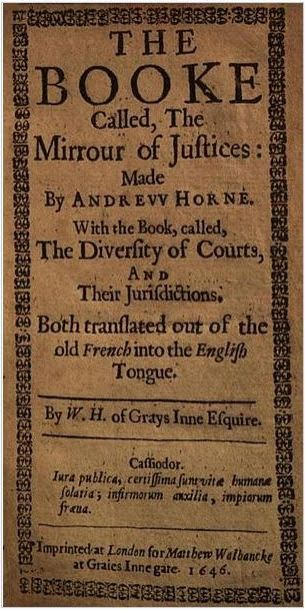 All social institutions in the West have been subverted by Cabalist Jews, Freemasons and their dupes.
We see this with the collaboration of organized medicine in the COVID hoax. We see it
in the media, business, education, church and government. The West has folded like a cheap tent.
Here, Brabantian looks at how with the fading sense of a "higher law," the corrupt justice system has
been corrupted.
by Brabantian
(henrymakow.com)
Mediaeval London Chamberlain Andrew Horne (c.1270-1328) wrote a legal guidebook, the 'Mirror of Justices', saying that late 800s Anglo-Saxon King Alfred the Great truly deserved his title, because he reviewed the conduct of judges, and hanged dozens of those judges who had betrayed the people.
Yet today, people think of judges as 'the last word', almost beyond review or question, despite also feeling that justice is not being done.
People see courts who are destroying families, going easy on some groups or on 'connected' major criminals, whilst coming down unfairly hard on certain classes of victims, and denying basic human rights.
What went wrong?
Corruption of courts and judges happens in three ways:
(1) Bent rulings favouring a rich or connected party, as when the judge is bribed or threatened or pleasing his friends
(2) The judge deviously twisting and extending existing law, 'interpreting' to fabricate and invent via court order, 'legislating from the bench' to advance an agenda
(3) The judge biased to favour a particular group over other groups, for example, women over men, one ethnicity over another, one tribe or clan over another.
Unfortunately, we now see all of the above. As the sense of a 'higher law' from heaven has faded from society, black-robed 'priests' of the judiciary have grabbed more power.
CABALISTS
The temptation of Marxists and others, to use 'revolutionary tribunals' to bend law and change society, has proved irresistible to judges across the Western world, and to the oligarchy of Satanists behind the scenes. Twisting the law, mauling victims via the courts, can give psychopathic, satanic pleasure. It doubles the wrong, as there is the crime itself, and the second abuse of claiming it is all 'legal'.
But it wasn't always this way. Ancient India, Persia and Greece all saw a higher divine law, a 'natural law' known in people's hearts, which human laws should emulate. Circa 100 CE ancient Roman poet Juvenal asked, 'Quis custodiet ipsos custodes?' - 'Who guards the guardians themselves? Who will judge the judges?'
Biblical prophets railed against injustice. Christian sages Augustine and Aquinas boldly declared that, 'Lex injusta non est lex' - 'An unjust law is no law at all'.
After the early 1300s book on hanging dishonest judges, in 1346 King Edward III ordered judges to provide "equal law and right to all our subjects, rich and poor, without regard to any person". This became the basis of the judge's oath in Britain and other nations, the judge swearing to "do right to all manner of people ... without fear or favour, affection or ill will". In the USA, to: "administer justice without respect to persons, and do equal right to the poor and to the rich". Alas, these seem mere words now.
As the West lost the sense of a higher law, the temptations of satanic power were swift. The 1789 French revolution was a manipulated Illuminati event.
It fascinates Marxists and Satanists, because it was more than reforms or regime change. It proved that literally everything in society can be overthrown, and quite quickly too. Politics, government, economics, religion, marriage, family, even ways of measuring and the calendar - nothing and no one was exempt.
Good things were also done in 1790s France - outlawing of slavery, more voting rights, the banning of torture and of slow methods of execution. But it was not long before things degenerated into satanic hysteria, with the 1793 introduction of 'revolutionary tribunals', where judges soon meted out death essentially at whim. The Reign of Terror ended the next year but remains a source of Marxist dreams until our own day.
As religion separated from intellectual life, the sense of 'the law' became downgraded.
Utilitarian John Austin (1790-1859) promoted 'legal positivism', law being merely 'command backed by sanction'. Frédéric Bastiat (1801-1850) wrote of 'the complete perversion of the law ... force at the disposal of the unscrupulous".
In Russia's 1917 revolution, Vladimir Lenin, Leon Trotsky, and Joseph Stalin, although disagreeing on many things, shared the same Marxist philosophy of twisting everything to serve end goals. In a famous phrase of October 1921, Lenin said everything was a question of, 'Who will win over Whom?' shortened to 'Who? Whom?' Trotsky repeated this in a 1925 essay, and Stalin also in a speech in 1929. 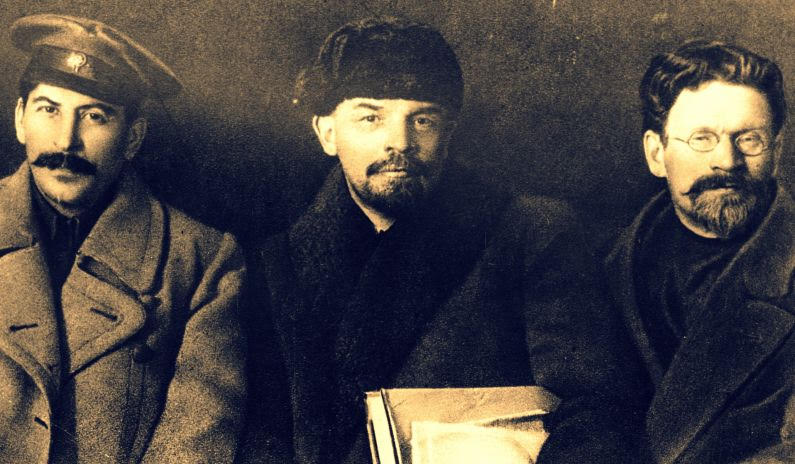 Three Jews, Stalin, Lenin & Trotsky in 1919
As conservative author, Steve Sailer has catalogued since 2005, this Marxist Who? Whom? has become the guiding principle of major media, USA law and courts, and social praise or condemnation in the Western World:
The nature of a crime or event almost doesn't matter anymore - Everyone immediately demands to know, Who attacked or sued or filed charges against Whom? And only then do most pick a side.
Judges appear to make things 'legal', and so rule via 'judicial supremacy' of a small group of judges who can be 'managed', is favoured oligarch strategy.
To the surprise of Israeli corruption expert Barry Chamish (1952-2016), he found that the Israeli Supreme Court actually ran everything there from the shadows, its seizure of power in Israel described by USA legal scholar and judge Robert Bork (1927-2012).
The 1789 USA Constitution allows Congress to remove even Supreme Court justices for lack of "good behaviour" - a power almost never used. Third USA President Thomas Jefferson warned in the 1810s, that the USA's end might well be in judicial tyranny, with Presidents such as Donald Trump blocked by activist judges: "The Constitution, a mere thing of wax in the hands of the judiciary, which they may twist and shape into any form they please."
Judges everywhere in the West seem to be increased following a cultural Marxist, George-Soros-linked programme as if they were chosen for that tendency. Occasionally, judges turn up suspiciously dead. US Federal Judge John Roll was shot and killed in the street in 2011 after ruling against Obama. In 2016 US Supreme Court Justice Antonin Scalia was found dead - with a pillow over his face! - also after ruling against Obama. Is that how they keep the judges in line?

The US-“Supreme Court” is a coven of witches.

The great citizen, Samuel Pfendorf, says in his writings which are available as PDF downloads that the source of the problem is unlawful oaths. He is against the taking of oaths, as is Kant. The only time the oath becomes relevant is when the judge is required to break the law. I never heard of the book that is the subject of this essay, but there are many and they are all free PDF's. Let's get this stuff onto our unplugged hard drives!!

The US Supreme Court went down the toilet years ago and you'd probably have to go all the way back to the days of Byron White to find some semblance of legitimacy on that court.

The Ruth Ginsberg appointment under Bill Clinton to the Supreme Court was a move that brought the court to the point of no return to normalcy or decency.

And, the court never recovered from it.
If you want a twisted and nonsensical interpretation of the law just have your case heard by them, you won't be disappointed.

Because corrupt judicial processes are largely hidden from the public, one can understand why the system still enjoys a fair degree of public confidence. On the other hand, the unquestioning puppy-like acceptance by the public of daily updates on COVID by politicians known previously to have built their careers on lies and shady dealing really is dismaying.

Unrelenting cognitive dissonance imposed on the population from birth appears to have achieved its purpose of generally making rational perception impossible. As former CIA Director William Casey was reported as saying (perhaps with a bit of tongue in cheek?) in a White House meeting in February 1981, "We'll know our disinformation program is complete when everything the American public believes is false"