Sweden Parties While We Suck CO2 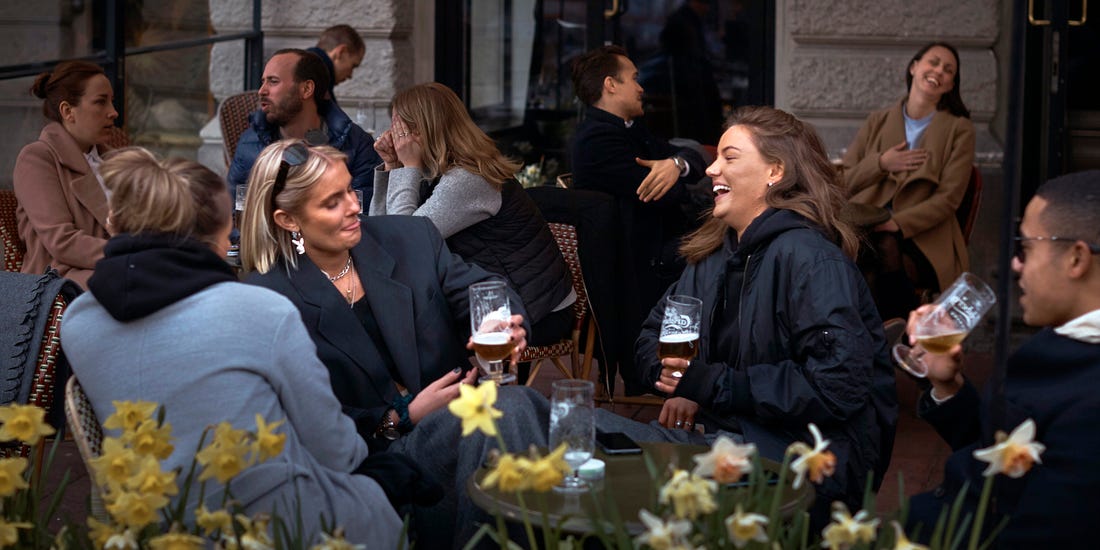 I asked our Sweden correspondent how
his country evaded the #scadmdemic nonsense.
He answered that resistance is growing there. The
government has neither the credibility
nor the means to enforce a lockdown.
By KMG
(henrymakow.com)
The Swedish alt media has grown too powerful for TPTB and the criminal ghettos are too many and it would be impossible for the feminist Swedish police to enforce any lockdown here and then the whole world would be shocked to see Sweden and perhaps learn from Sweden - so TPTB didn't dare to touch us at all I believe...
Imagine the other week when Danish (!) people came to a Swedish Muslim ghetto and burned the Koran in Malmo. Reaction from Muslims? "We will enslave the jews..." - the Muslims were singing songs against the jews... It's true that these Muslims have understood more now than before and they (quite rightfully) blame things on the Swedish crypto jews after the Aschberg (Mossad) murdered Bechir Rabani.
So the situation is complicated here with the masses becoming more and more aware. Alt media channel Swebbtv has exploded in 3 years with 60 K YT subscribers (much more than our fake state television) and very powerful retired CEOs and stars openly supporting their channel  in very high-quality interviews (i.e. former Scania President Leif Ostling)
Youtube tried to shut them down but there were huge protests against the gov't (also from inside the gov't according to our sources) so they put it up again - imagine we can really stop the gov't from shutting down alt-media channels. The socialist prime minister is now waving Swedish flags and complaining at our migrant hordes... Of course, he is trying to escape the coming judgment and trying to recruit nationalist supporters. Classic tactics.
We have another ten to twenty powerful and well-informed alt-media channels - all of whom have picked up the truth and importance of culture war. The tax bureau attacked a former Swedish conservative FEMALE Christian alt news priest the other week and tried to tax her to death for receiving donations online. There is a huge protest about that now with people supporting her "en masse" so the gov't loses every major battle it seems.
To summarise: inform the people about the corruption, the culture war and then expose every attack from the tyrants on the alt media people. That is when the tide will turn. My take. Whichever attack on the people that they carry out at this moment fades into nothing very quickly because people protest and they are angry.
Last week our Parliament reopened after the summer break.
Can you imagine - EVERY MP was shuttled in on the backside of the parliament building to escape the protesting people and the alt-media people standing at the front door... This is how scared they are now.
Our minister of justice said publicly that "Swebbtv is the enemy of the people...". He lied: "Enemy of the Satanists" is the correct term.
----
First Comment from K-
I have put some thoughts on why Sweden didn't go for lockdown as most other countries in the world, as it's not logical for me that politicians (i.e. the guys drawing in the strings), should be as helpful that saving us from mandatory quarantine, masks on so on? I. e. the same politicians that for some 30 years or so have almost go over bodies to implement the Kalergi plan of ethnical cleansing here in Sweden. So an agenda of something other than medical or scientific must be behind the Swedish non-lock down policy? I have been thinking in terms of shielding the Swedish economy from a housing bubble crash, or spare Sweden before it's role as a pilot country on the mandatory vaccinations? But as the Swedish guy in your latest article put it, the reason is that the Muslims (about 10% of the population)  and other immigrant groups in Sweden is now so very large and spread everywhere  (ca. 1/3 of the population), that mandatory lockdown is impossible to uphold. I therefore think the guy 'KMG' is exactly right on the nail on this.
Also in the other article, the one by ex. diplomat Jens Jerndal, I think this is a great article. I didn't know about him before but took a lock and did see that the same, or near identical article, had been published earlier on a Swedish forum. I did notice that he is 86 years old and it's striking that some so rather old persons - well, he seems to have a young mind - is at the forefront to save the world from the perpetrators of the Plandemic. He not only informs us, he also give us advice on how to act.
I also think of 83 year 'young' Dr. Lorraine Day, as the "Super grandma" in class with the "Superman". Here is some videos with Dr. Day from May 9, 2020:
Dr. Lorraine Day AIDS Expert: The Plandemic Was Designed To Usher in the NWO and the Noahide Laws To Depopulate the Planet And To Make Everyone Pay For It! - Great Eye Opening Videos! Saturday,
https://beforeitsnews.com/christian-news/2020/05/dr-lorraine-day-aids-expert-the-plandemic-was-designed-to-usher-in-the-nwo-and-the-noahide-laws-to-depopulate-the-planet-and-to-make-everyone-pay-for-it-great-videos-2585992.html
I like your mixing kindness of animals and so on at your sight. We really need some good things to change our minds on, and to contrast all the evil of this world now. Maybe the last video of ABBA will fit into that?
ABBA - The Last Video
https://www.youtube.com/watch?v=8L6T6Yj5u4k&feature=emb_rel_end

Comments for "Sweden Parties While We Suck CO2"

Interesting good news, showing what is possible when you can get the truth to enough people.

This reminds me of what one of my "phone man" sons discovered back in the 70s/80s, wiring government buildings for phones.

Whenever a new county courthouse is built in the U.S., from that time on, it now contains secret entrances and exits for the judges and their cars. Obviously someone already knew that judges were going to go for the agenda, not the law, therefore they would soon become very unpopular and afraid of the wrath of the people.

Most U.S. judges of all types, as well as most U.S. lawyers, are freemasons. In some states, 100%. Practically, maybe positively, a prerequisite. Remember, judges, are appointed, seldom, if ever, elected.